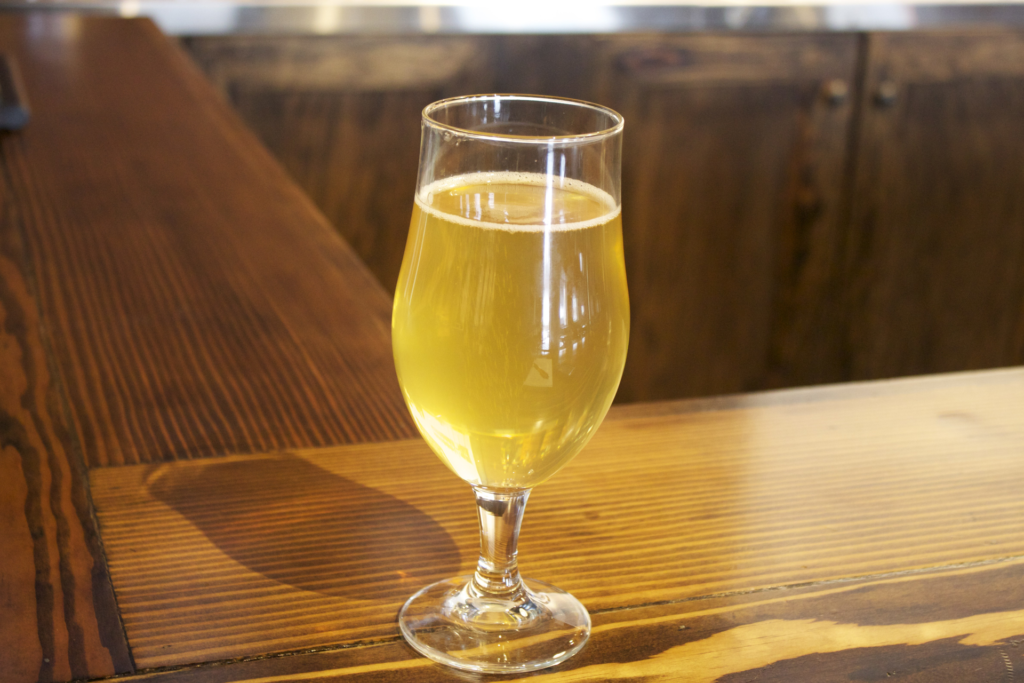 Ask Cinder Block Brewery owner Bryce Schaffter about his latest project, and you’ll hear from the mad scientist in him. And the ambitious businessman in him. And the proud husband.

“I’ll be the first in Kansas City to do it, for sure,” Schaffter says. “The only thing that comes close to this in the surrounding area would be wineries doing maybe an apple wine.”

He’s talking about the hard apple cider he started working on last October. He’s leading me on a tour and explaining how apples from local orchards have become the smooth, crisp beverage ready to be tapped at Cinder Block Brewery (110 East 18th Avenue, North Kansas City) on Friday, February 21.

Schaffter began his cider experiment at home four years ago, and he credits his wife with encouraging him to add the results to Cinder Block’s brand. “She basically said that if I was going to do this, I should make cider, too,” he says. “It was kind of jokey, but it became fairly apparent that she was serious.”

His home-cider batches topped out at 10 gallons. Friday’s yield is 400 gallons.

Schaffter says Cinder Block’s cider uses more than five varieties of apples, which he won’t name as a matter of recipe protection. All come from local orchards, though, including Stephenson’s, and he also acknowledges assistance from Louisburg Cider Mill, which helped with the apple crush. Talking about this part of the endeavor, he could be an eager grad student working in a lab. “For me, it was neat to see where the ingredient was coming from,” he says. “I’m actually seeing apples coming in from orchards in the surrounding area, and I’m actually seeing the apples going through the process, getting juiced and then coming to us.”

After the crush, Schaffter gauges the sugar levels and the acidity to determine what adjustments need to be made before the fermentation process begins. He points to four opaque fermentation tanks. (A fifth tank is earmarked for a future sour IPA.) 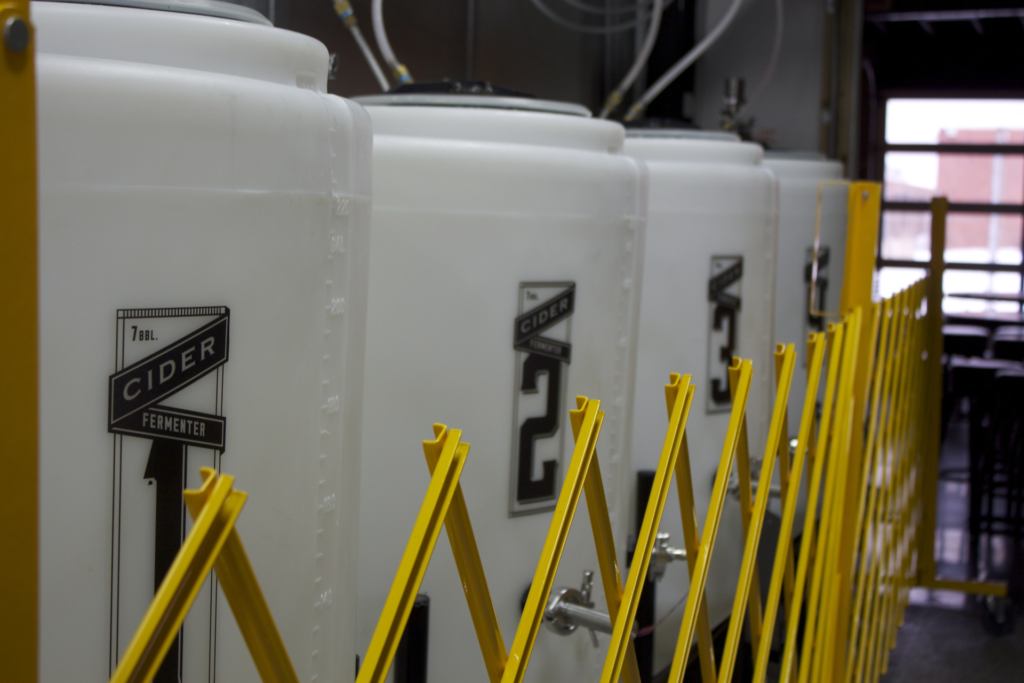 “When you ferment cider, the sugars in apple juice are so simple that the yeast eat every bit of those sugars,” he says. “So when the cider is done with the primary fermentation, it’ll taste like table wine. It’s like a blank canvas, which is pretty cool. You can do almost anything with it. You then have to age it and then blend back fresh juice.”

That process is called “back sweetening,” and larger cider makers use sweeteners such as corn syrup, saccharin or Splenda to do it. Cinder Block doesn’t.

“We’re using fresh juice,” he says. “So it stays all apple juice. It takes a little more finesse, and it’s a little more costly, but right now we can do that. And I think that’s what gives us a big apple aroma.”

Cinder Block’s apple cider has an alcohol content of 4 percent.

“I didn’t want to put a lot of alcohol into the cider because I think a lot of the cider drinkers we have coming here aren’t looking for that,” he says. “So I wanted a more session-able cider.”

Cinder Block’s apple cider is “French style,” Schaffter says. “Generally, it’s a little more of a tart, less mineral-y finish and a little more effervescent in my view,” he says. He’s working on an English-style carbonated version as well, which is, he adds, more of a pub-style cider, without the tartness. Schaffter already has 150 gallons of an English-style sweet-and-sour cherry cider (made from 30 pounds of sour and 30 pounds of sweet dark cherries) on tap. 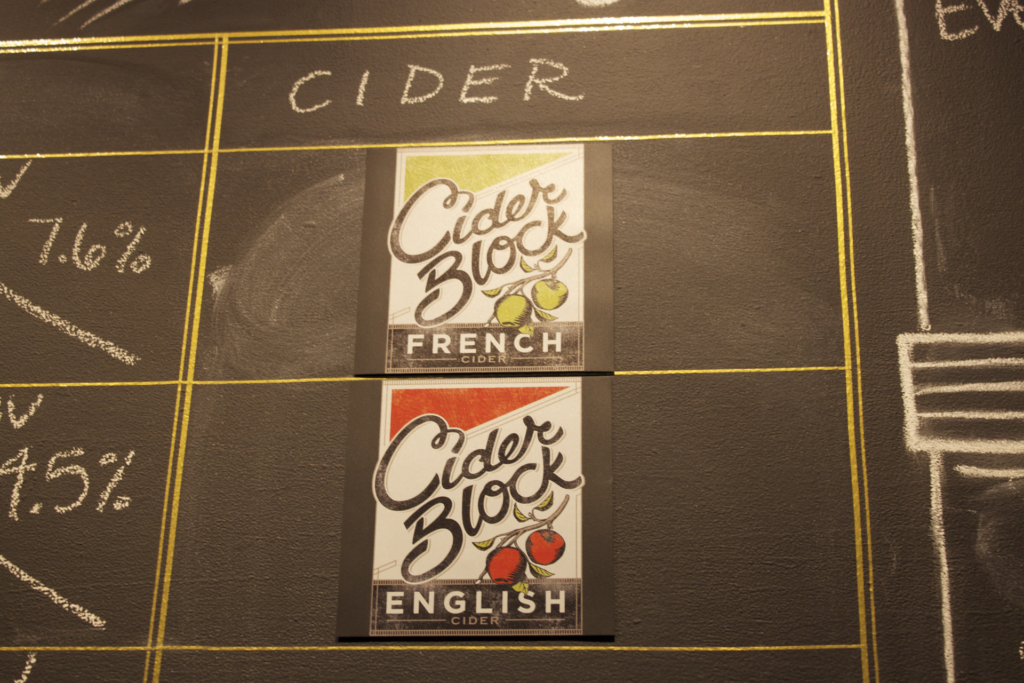 The conversation turns to when Cinder Block might distribute its products outside the brewery. Schaffter says he would like to be in kegs and maybe bottles by the end of the year, but there’s no rush.

“The reason I wanted to do a taproom so much is, I wanted to see people drinking my beer,” he says. “It’s really cool to see the reaction that you can trigger based on something you’ve made.” 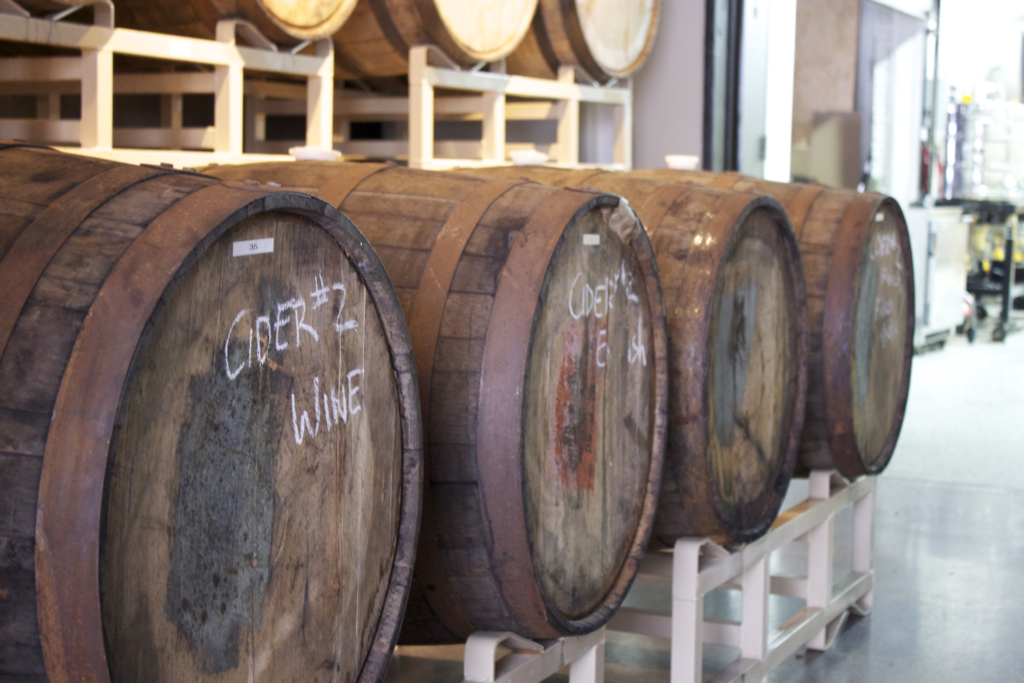 More to Handle
Cinder Block’s plans don’t stop at cider. Barrels along a wall of the taproom hint at what’s to come.

Over the next few weeks, Schaffter plans to start brewing a few new beers. Farmhouse sour beers – a Berliner Weisse and a saison – are in the works, slated for sometime around June. He’s also working on a series of new IPAs called Hop Maven. These will be special monthly or bimonthly beers made with rare hops in addition to the brewery’s Block IPA. The first is due out in about two months.

“We really wanted an avenue that we could go a little crazy and make some hoppy beers and use some really weird hops in the different beers that we’re making,” he says.