Cinder Block Brewery adds an event space and a patio, and prepares to can and bottle its beers 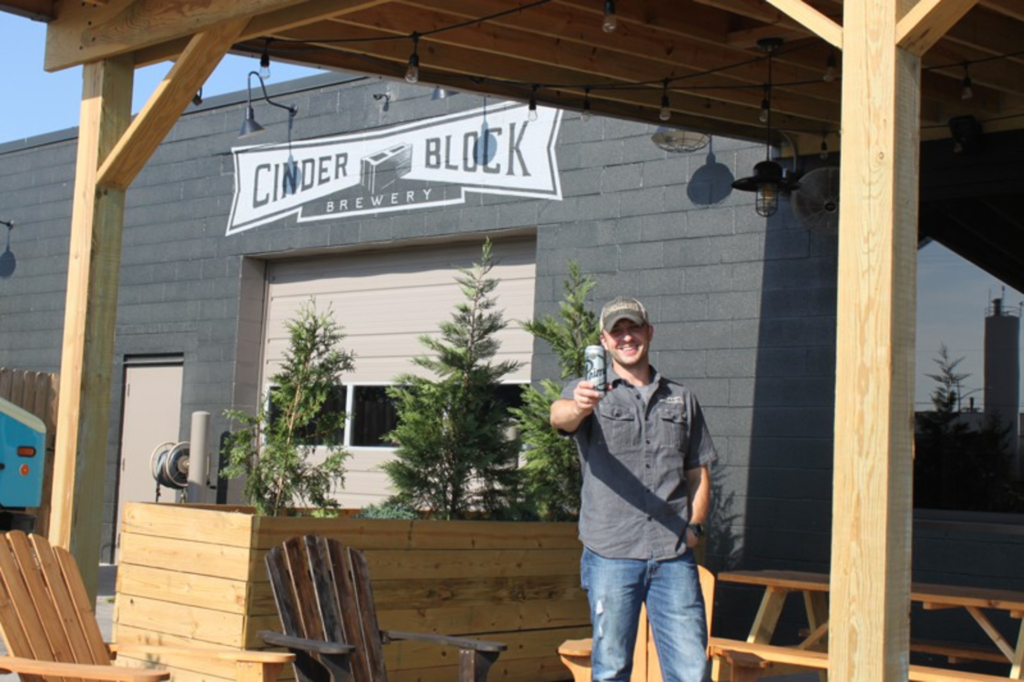 The next phase in Cinder Block Brewery’s evolution is here: an expansion inside and out of its home base, at 110 East 18th Avenue, in North Kansas City.

Its new patio space officially opens at 7 p.m. Friday, July 31. On the west side of the building are picnic tables and chairs for about 50 people, with an additional 3,000 square feet for games and entertainment. Friday night, the guys from Screenland Armour bring their short shorts and a 20-foot inflatable screen for a sundown showing of the first episode of the Wet Hot American Summer Netflix series. That should go just fine with the Back Rack BBQ food for purchase. And for the easily distracted, there also are games (bags, giant Jenga and horseshoes). Don’t forget your foldout chair.

The patio isn’t the only addition to Cinder Block headquarters. A sliding door between racks of barrels in the existing taproom leads to a newly finished event space, which can be rented (as can the patio) and features a projection screen, a sound system, a bar, and plenty of tables to handle overflow from the tasting room.

Schaffter says the demand for his beer required an investment in his brick-and-mortar brewery.

“There’s two parts,” he says. “One, we know we want to expand and add on tanks. Our ultimate goal is to add tanks over there. And we’re brewing so often now, we didn’t even have the space to keep raw materials — just the influx of grain. And with canning and things like that, we didn’t have any space to keep those raw materials anymore. So the additional space is a big help.”

Those additional tanks could come later this year or in 2016, pushing Cinder Block’s capacity to 1,000–2,000 barrels of beer a year.

“My goal is to never be some big-ass production brewery,” Schaffter says. “My goal right now is keeping the Kansas City market supplied with product, and then expand into local stores.”

Getting into stores while also meeting the draft demand for Rivet Rye, Block IPA and Prime Extra Pale Ale will require those additional tanks.

“My vision for us in this next year is that we add three 30-barrel tanks to support sales for out-of-house distribution, three 30-barrel fermenters and two 30-barrel brite [tanks] because that would help us cover distribution and packaging and be able to keep up with demand on a moderate scale,” he says. “Still, we couldn’t overextend ourselves much … but that would be a nice steady flow. Then, also, that frees back up our 15-barrel tanks just to do a lot of more seasonal stuff or one-off stuff that we want to do.”

Even with more tanks, distribution to the other side of the state line may be way off.

“I want to get into Kansas, but the thing that I don’t want to do is affect the accounts that we already have and the relationships that we have in Kansas City by not being able to supply them with product first,” Schaffter says. “When I feel comfortable that we’re doing that, then that’s when we’ll look to move into Kansas.”

“All I know is that we’re going to can something,” Schaffter says. “We’ve got the labels. Everything’s approved. I want to take a four-pack of cans and walk somewhere outside of the brewery and go have a beer. That, my friend, will be exciting.”