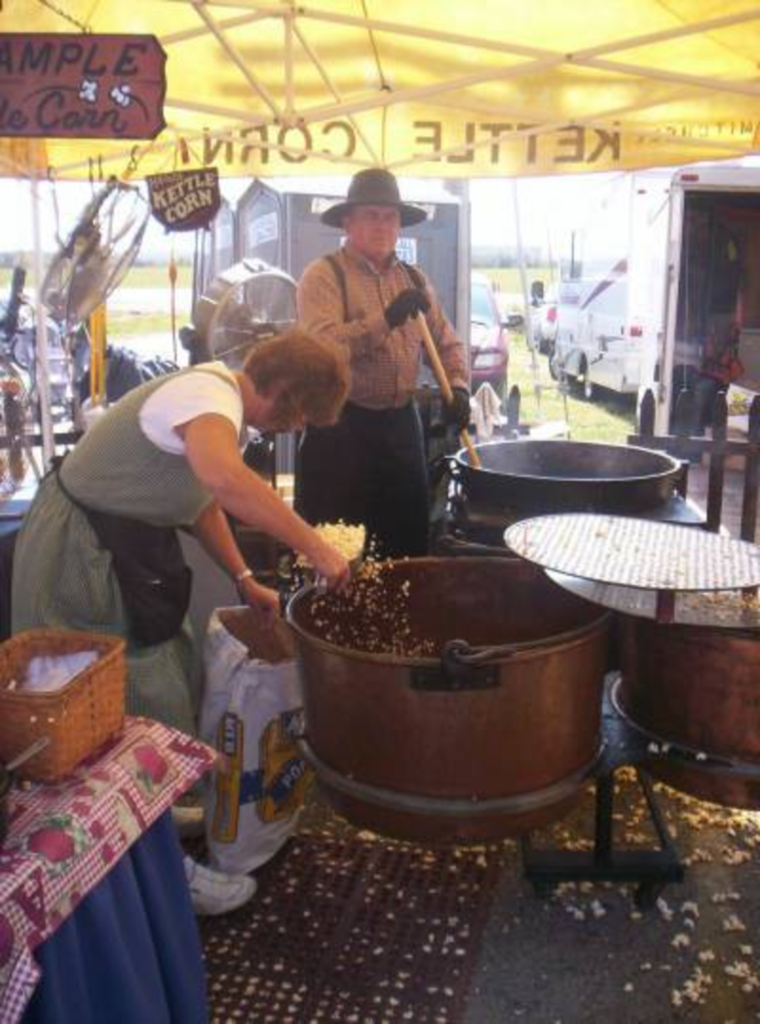 ​The first weekend of the Louisburg Cider Mill’s annual Ciderfest & Craft Fair started last weekend, but another weekend of festivities is planned for Saturday and Sunday, October 3 and 4 on the grounds of the cider mill on Highway K-68. It’s about 30 minutes from Midtown — here are simple directions — and the family-friendly event features an elaborate corn maze, a pumpkin patch, and lots of very good things to eat.

The freshly made Kettle Corn (pictured above) had such a potent aroma it was difficult to pass this booth without buying something. In fact, there are a lot of seductive scents at this festival, including barbecued meats and the sweet, succulent perfume of freshly-picked apples in the cider barn.

Unlike that other Apple Festival I attended a couple of weeks ago, where there were shockingly few apples to be seen or eaten, the Louisburg Cider Mill has an abundance of fresh apples and apple delicacies such as the most delicious cider doughnuts ever. The apple cider, of course, is fantastic and so are the apple slushie drinks.

​The Craft Festival has some vendors that don’t fall into any traditional craft category, like the inevitable Tupperware Lady and the Pampered Chef sales teams, but there were some real crafty people too, selling pottery and halos — not just for saints and angels anymore, I now understand — and the friendly Bruce and Cindy Silvest of Golden Ridge Farms in Osawatamie, Kansas. The Silvests are “nuts about pecans” (it’s their business slogan) and their booth was filled with bags of glazed pecans (the French vanilla glazed variety are particularly fine) as well as homemade jams and jellies.

​We decided against a stroll through the meandering corn maze — I have Children of the Corn nightmares about things like that — but we did stop to listen to an excellent bluegrass band and wander through the well-stocked “Country Store” (which sells jugs of cider, apples, cider doughnut mix, jams and relishes) where, behind a window, we could watch ladies making those cider doughnuts in front of our very eyes. It looked so easy, I toyed with the idea of buying a package of the mix, but then I had an epiphany: I prefer eating doughnuts to making them.