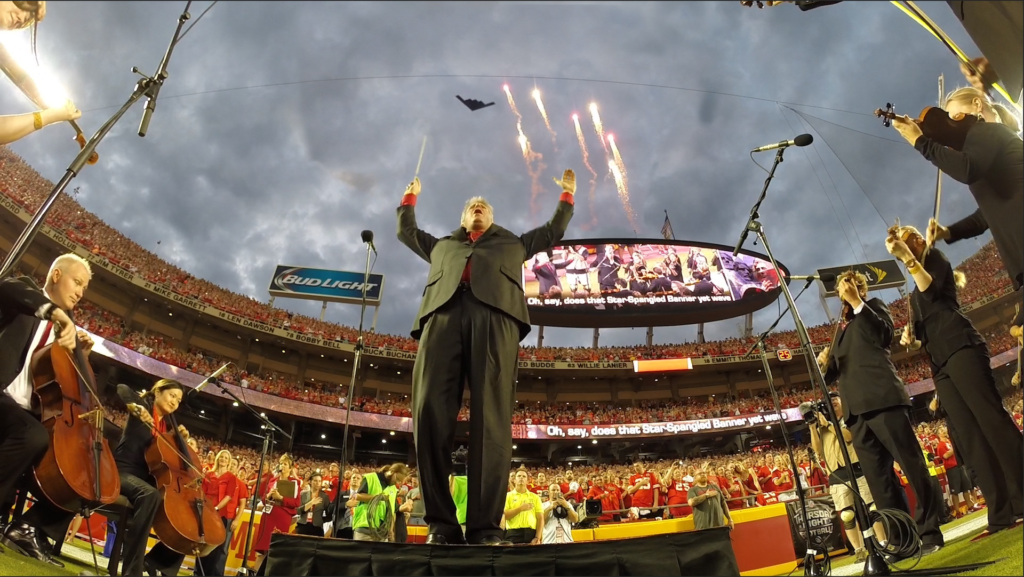 Going to a Chiefs game is one of the most intense things you can experience in Kansas City. In 2014, Arrowhead Stadium earned the world record for the loudest sporting event, when the crowd roar reached 142.2 decibels during a 41-14 stomping of the New England Patriots. Meaning it’s slightly quieter to position yourself 100 feet behind a jet engine. This is an impressive statistic, yet it fails to capture the overwhelming physical force of 75,000 people simultaneously yelling at maximum human capacity.

This isn’t an arbitrary action; each Chiefs game is crazy in its own way, demanding its own crazy response. Of the dozen or so games I’ve attended over the years, I’m thinking especially of the 2010 home opener, which I rode to in my dad’s old convertible while drinking beer and eating barbecued ribs out of a paper sack. That game featured Billy Ray Cyrus singing the national anthem (in a Montana jersey, of course), a flyover by two attack helicopters, and, for three quarters, torrential wind and rain. But I was also there for the most frigid kickoff in Chiefs history, last December (1 degree, technically a tie with a 1983 game), ahead of which we’d bundled up as though setting out from base camp in Antarctica. That was a screaming cold. 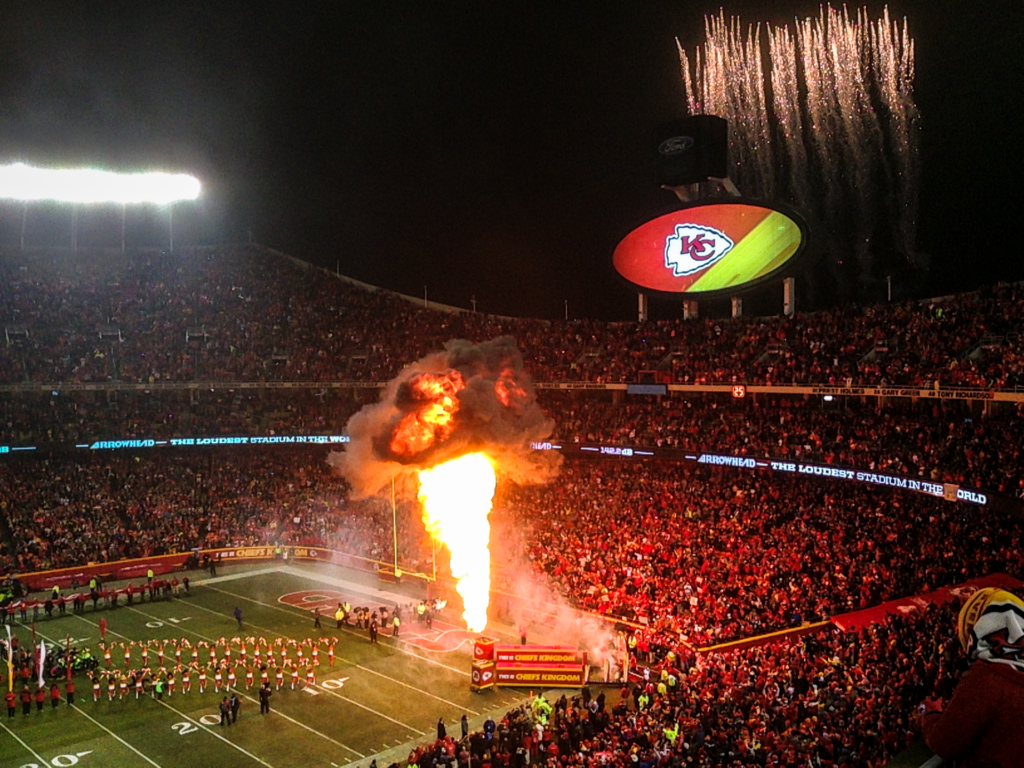 Most recently, there was last season’s playoff loss to the Steelers, rescheduled from a noon kickoff to dodge an ice storm that never arrived. The night game’s precipitation turned out to be fog — a verifiable meteorological manifestation of the cloud of doom that had hung over the franchise’s playoff fortunes for two decades. Afterward, the Steelers quarterback, whose name I refuse to spell out here, said it was the loudest game he’d ever played. I believe the word he used was deafening.

So the atmosphere at Arrowhead is widely understood to be uniquely thunderous. But there is one other live entertainment event in the metro that rivals our brand of NFL insanity: the Kansas City Symphony.

Obviously, the symphony doesn’t offer the physical violence, the public intoxication or the ear-splitting volume of a sellout game at Arrowhead. But let me point out some key similarities.

For starters, there’s the product on offer. Both the Kansas City Chiefs and the Kansas City Symphony feature teams of highly skilled and practiced professionals, working under world-class leadership and backed up by impressive support crews. Each outfit spends weeks rehearsing for relatively short display — in that time having tried to perfect a fluidity of motion, a sophisticated interplay and a precise coordination indicative of months of group practice and years of individual training.

Of course, even given all that teamwork, both are games of superstars. Whether it’s Yo-Yo Ma or Peyton Manning, the biggest names draw the biggest crowds. Witnessing violinist Augustin Hadelich tear into pyrotechnical glissandos on Paganini’s Caprice No. 5, or seeing Tyreek Hill streak improbably down the sideline on a wild kickoff return, we can feel our pulses racing even as our breath gets put on hold.

Both symphony concerts and Chiefs games take place in dynamic, purpose-built climates. Arrowhead Stadium was designed by Charles Deaton, the architect of the futuristic Sculptured House in Woody Allen’s Sleeper. The Kauffman Center, the giant glass croissant designed by Moshe Safdie, has drawn comparison to the Sydney Opera House. Both buildings are positioned across the street from a Denny’s restaurant.

The Chiefs season-ticket holder and the symphony patron have each signed up to witness regular spectacle, filled with conflict and drama and studded by hero-worship and the pulse of giant drums. There is the quest for a Super Bowl ring, and there is Wagner’s epic “Ring Cycle” (and the journey toward perfecting it). Historically, both arenas have been male-dominated, but the eternal feminine is never far on the sidelines, from Clara Schumann and Gisele Bündchen to the nine muses and the Chiefs Cheerleaders. These days, women are often the greatest stars, from hometown hero Joyce DiDonato to the headliner of the NFL’s de facto greatest stage, the Super Bowl halftime show.

Both the Chiefs and the Kansas City Symphony are led by affable yet highly driven figures. Andy Reid is broadly regarded as the best pro football coach not to have won the big one, while Michael Stern is no stranger to elite international stages. He has also appeared at Arrowhead, leading the the symphony’s performance of the national anthem before the 2015 home opener — though Reid has yet to take the podium.

Then there are the fans. Chiefs Nation tends to run through GDP-affirming quantities of meat and beer before games. Symphony pregaming is more modest — a nice dinner, a tipple of chardonnay, perhaps a Werther’s original. But this base, too, has laid out good money for its tickets, and if you pick the wrong time to sneak to your seat in the middle of an aisle, be prepared to face grumbles, glares or a stony refusal to move. There are strict codes of conduct at each venue: no clapping between movements during a symphony, and absolutely no yelling while the home team is in the huddle. (Once the conductor bows or the rival QB is in the pocket, by all means: Go crazy.)

Critics of this comparison might argue that football fans have an inherent appetite for violence, while the symphony is graceful and free of suffering. But that’s not totally accurate. One of my favorite things to do before a classical performance is read about the tragic circumstances that led to a work’s composition — Schumann’s failed suicide attempts, say, or the death of Mahler’s daughter from scarlet fever. The suffering behind the canon renews our appreciation of it, while the art itself informs our own suffering and guides us toward new depths of feeling. In both sport and in the arts, we relish the pain of the performer while rooting for a miraculous recovery. We want the composer facing his own mortality to pen something uplifting. We want the quarterback on the stretcher to extend his arm and give us a life-affirming thumbs-up.

But what can these oddly parallel organizations learn from each other? Let’s examine by category. 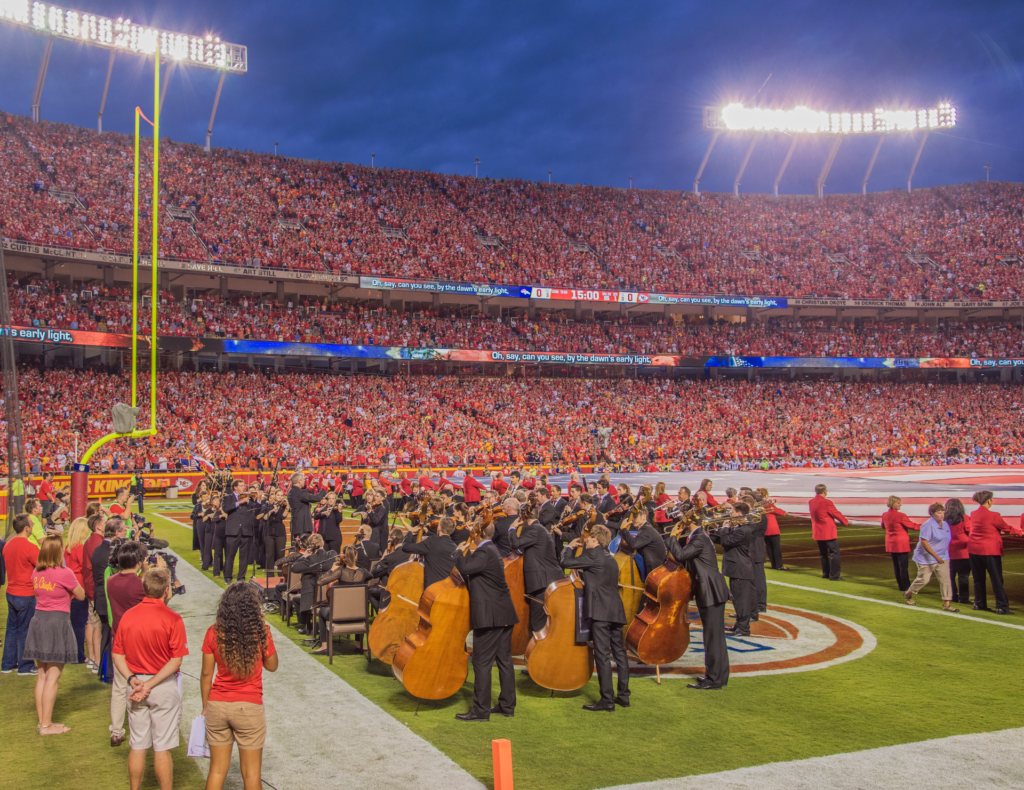 Cheering: The sports crowd erupts for great plays from the home team, but symphony patrons are expected to maintain silence at all times. Maybe it’s time for some Debussy fan to stand up, spontaneously applaud and pump a fist when someone nails her part. (You go first.)

Exit strategy: The concrete ramps at Arrowhead and the spiral stairs in the Kauffman Center back up pretty quickly after the event, making for a glacial egress. The difference is that departing Chiefs fans often chant in unison as an expression of celebration or lament. I’d like to hear what such an exit might sound like after an especially resonant symphony.

Price: Classical performances are perceived as being expensive, but you can get day-of tickets to the symphony for $20. The Kansas City Symphony also hosts happy-hour concerts and even free concerts in an effort to attract new audiences. The Chiefs, on the other hand, just raised the parking price to $60, to say nothing of the tickets. Will people still pay that to get in? Of course they will. But that doesn’t make it OK. 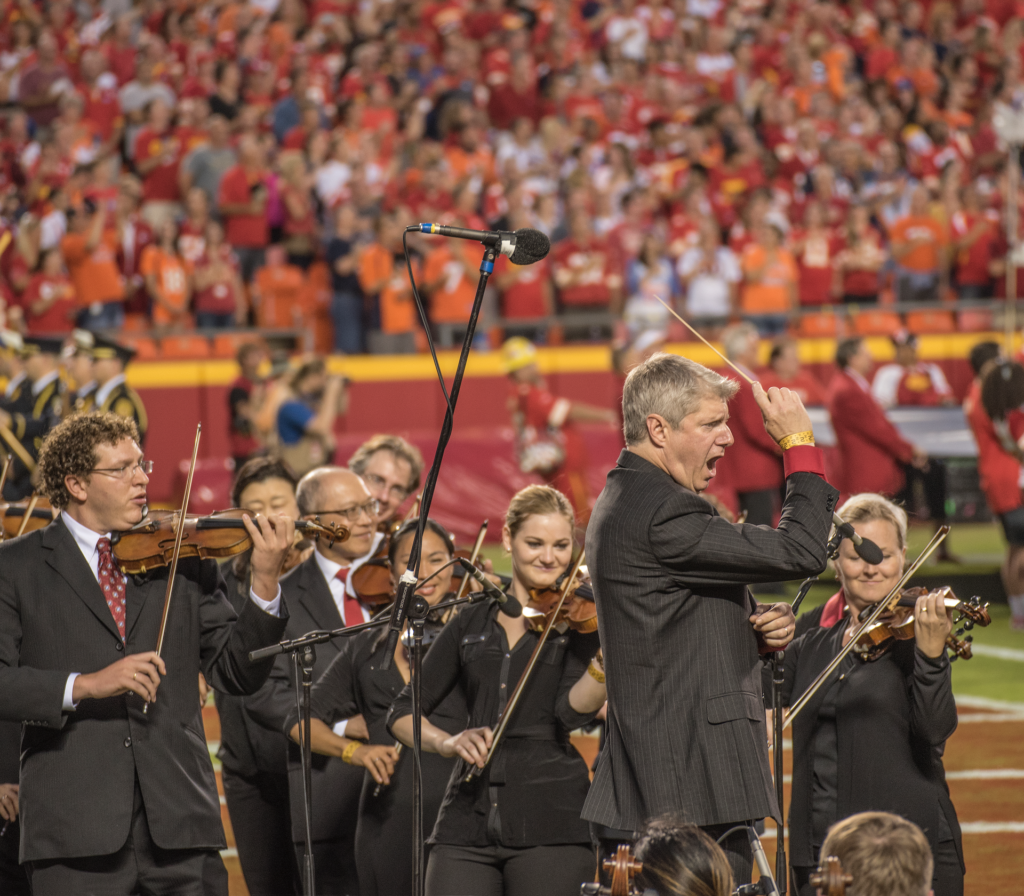 Intoxication: Chiefs fans could stand to tone it down a bit (go to a night game and you’ll see what I mean), whereas symphony lovers could probably cut loose a little more. (Tailgate outside Webster House, anyone?) Obviously you don’t want anyone puking on a Mercedes, but a few discreet nibbles from a weed cookie may in fact be just what Ravel had in mind when he wrote “Bolero.”

Music: “Thunderstruck” and “Crazy Train” are stadium favorites for good reason, but how powerful would it be to hear Verdi’s Requiem blasting from the Arrowhead speakers? I’d also love to hear “The Hey Song (Rock & Roll, Pt. 2)” not only reinstated at Chiefs games but also performed on the field by a live orchestra. (Yes, I know Gary Glitter has done reprehensible things, but that banished song belonged to us more than to him.)

Now, some of you are saying: Gary Glitter? “Bolero”? Sixty goddamn dollars? None of that sounds good. Fair enough. Together or apart, the Chiefs and the symphony aren’t for everyone. To you holdouts, I recommend Major League Soccer and the ballet.