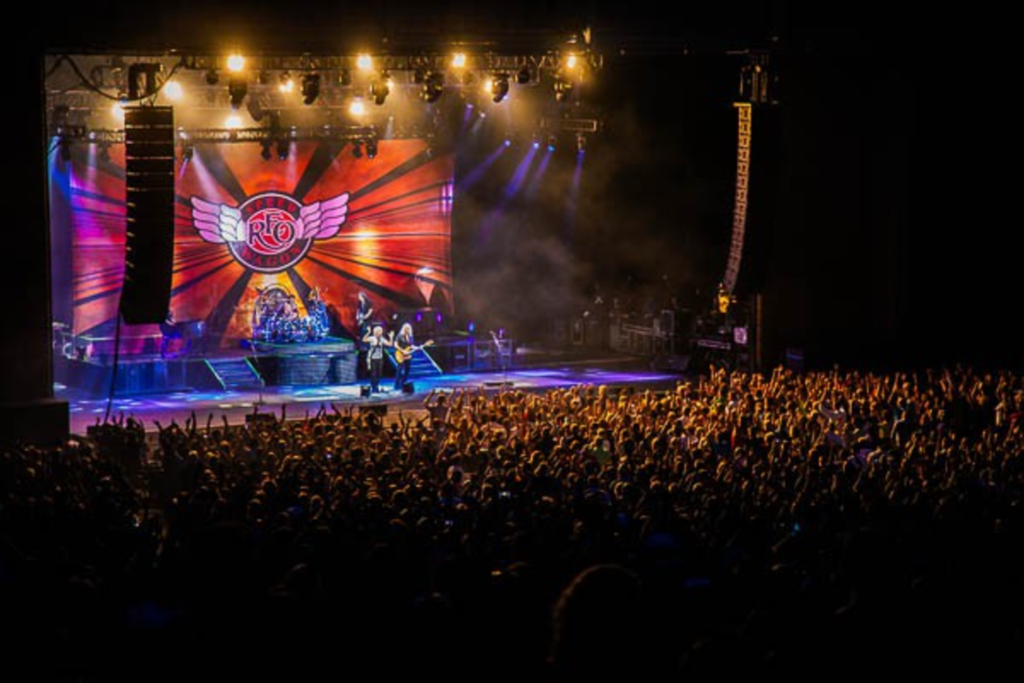 “As a 12-year-old, I told myself if you stick to it, if you set a goal for yourself, you will do it,” preached REO Speedwagon frontman Kevin Cronin, foreshadowing the night’s climax while introducing his band’s next song. “You will hear a trombone on ‘Ridin’ the Storm Out.’ There may be people who tell you to give up on your dream, but you’ve got to ‘Keep Pushin’!” 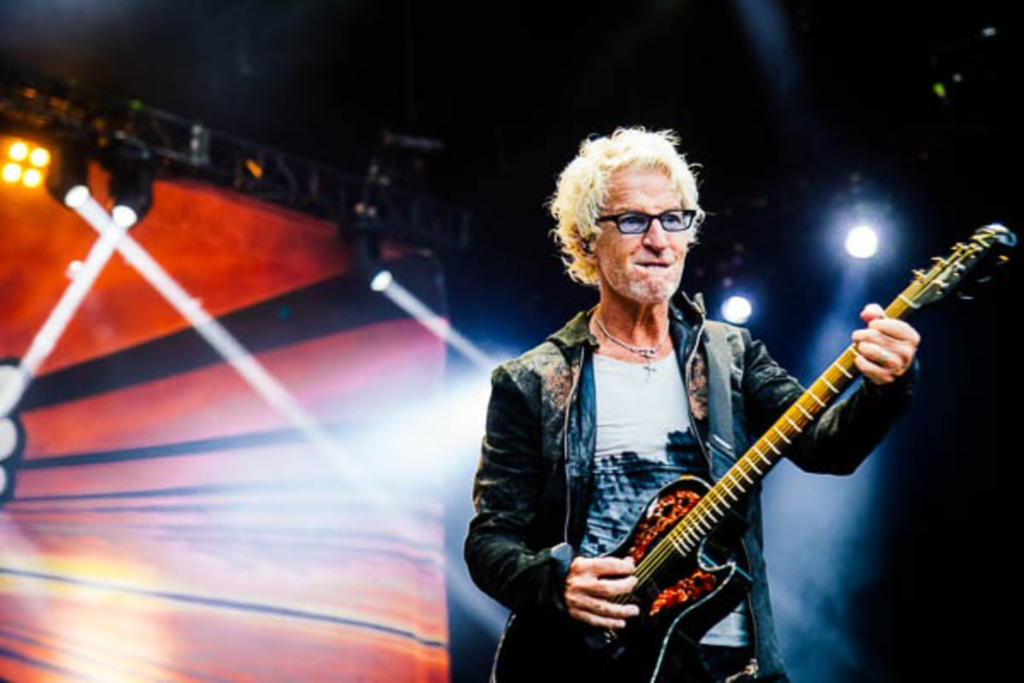 It’s a weird dream to cling to, especially since “Ridin’ the Storm Out” hadn’t been written yet when Cronin was 12 years old. Also, the song is from 1973, so you’d think somewhere between now and then he would’ve found a trombone player that could at least reasonably fake it.

But no matter. We can all be glad Cronin didn’t let the dream die, because Chicago and REO Speedwagon’s combined supergroup encore was the stuff of classic-rock legend.

Just a few minutes after Chicago’s set finished, both REO’s drummer Bryan Hitt and Chicago’s drummer Tris Imboden appeared back onstage, kits side by side. Gangs made of mixed-up members from the two bands wandered in from opposite sides of the stage as if they were going to rumble, and together they all launched into “Ridin’ the Storm Out.”

Between Chicago and REO, 14 men were up there. With Chicago’s horn section smoothing out the beginning of “Keep on Lovin’ You,” the switch from the lushness gave the chorus of REO’s prom theme some added power for once. 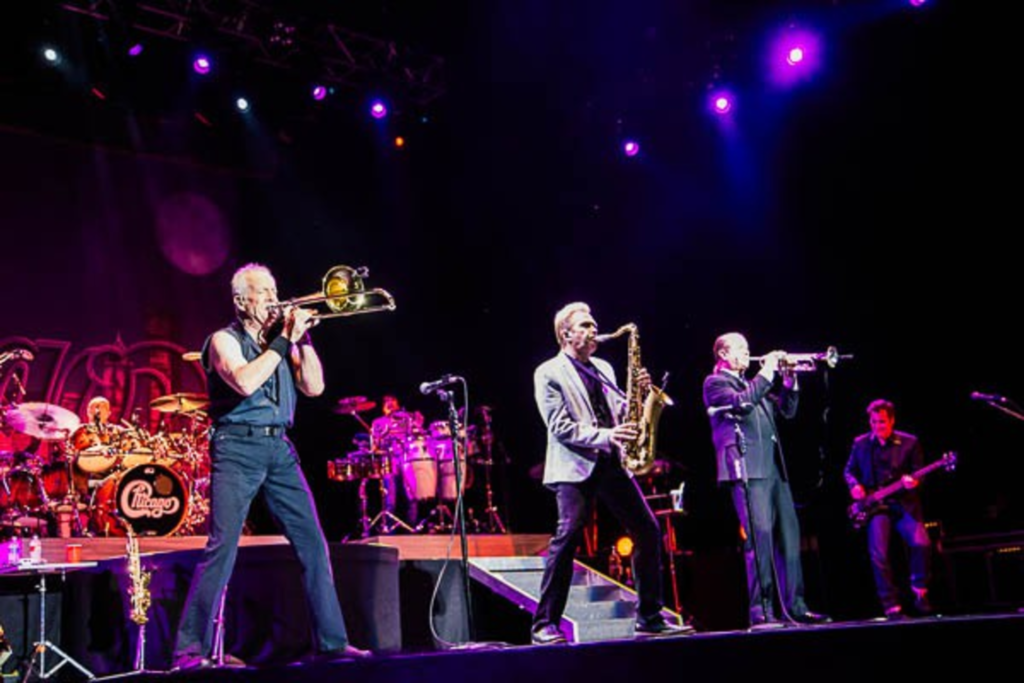 Chicago’s Robert Lamm played a keytar with neon pink and green buttons for the encore. As REO manhandled “25 or 6 to 4,” forcing Chicago to turn up the rock with them, Lamm looked like a shellshocked music teacher glancing around idly wondering, “What the fuck are they doing to my song?”

During Chicago’s set earlier, the longtime band hewed closer to their jazzier side. Opening with “Ballet for a Girl in Buchannon,” a multipart suite that comprises some of the early hits from Chicago II, the horn section rightly took center stage to show off their interplay. 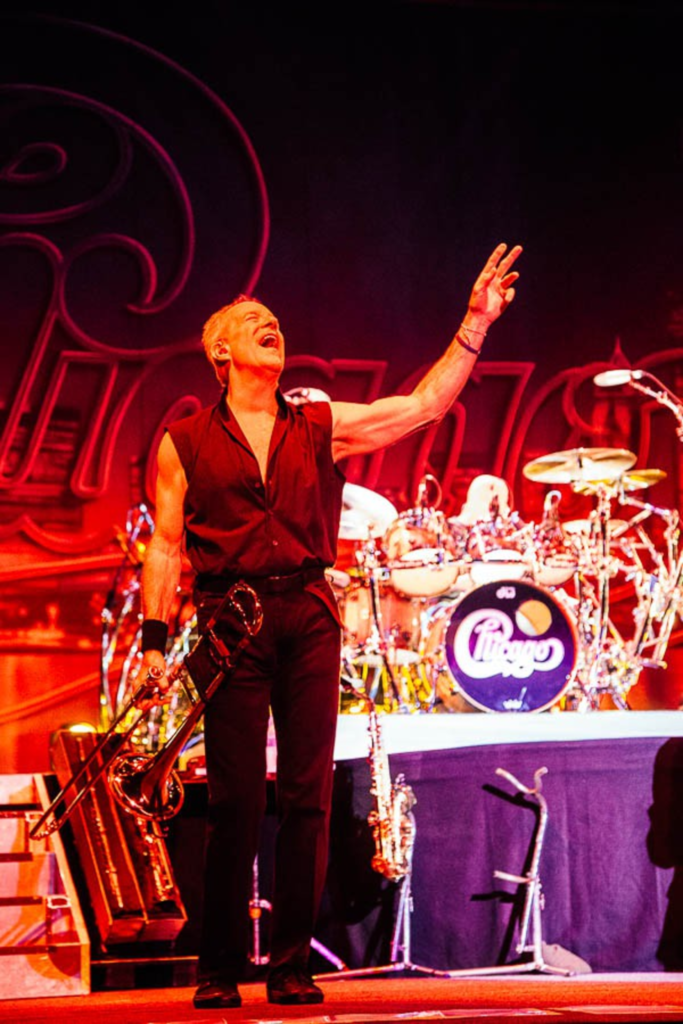 It’s easy to see why Cronin would dream of playing with trombonist James Pankow. Wearing an unbuttoned sleeveless black shirt in contrast to the rest of the band’s business casual, Pankow is the bad boy of Chicago’s horn section, twirling his trombone all over the place and dancing madly. Throughout every song, it looked like Pankow was lip-synching, although never once did he actually seem to synch up with the song Chicago was playing. It was as though he was playing a whole different show than the rest of the band.

Chicago also had to play a few of the ballads, of course. Even though bassist-singer Jason Scheff has been with the band since 1985, Peter Cetera is still sorely missed on “You’re the Inspiration” and “Hard to Say I’m Sorry.” (What happened to Cetera? Presumably he’s still wandering around on that dojo from the “Glory of Love” video.) 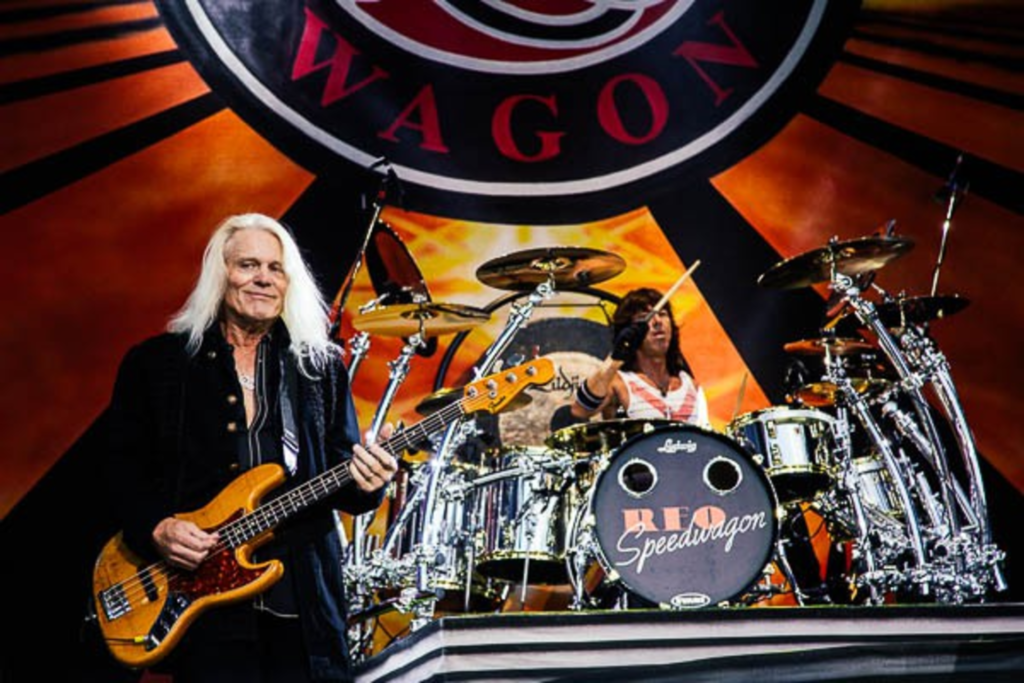 REO opened their set with “Don’t Let Him Go,” which finished with Cronin, guitarist Dave Amato and bassist Bruce Hall huddling at the front of the stage for a brief axe-off and impromptu band meeting. While we the audience weren’t privy to the conversation, I think it went something like this:

“Hey, maybe we shouldn’t play ‘Golden Country’ tonight. I know it’s ‘socially conscious’ and, despite being 40 years old, perhaps still a little relevant in today’s turbulent climate. However, it’s really ham-handed and a flat-out bad song. Not to mention it’s six and a half punishing minutes long, so maybe we could at least cut it in half? What about a medley? Who’s up for a medley?”

Cronin is the kind of frontman who likes to make the audience part of the show, frequently telling us, “You sing!” While we did OK during “Can’t Fight this Feeling,” I feel like we really bungled the back half of the chorus to “Take It on the Run.” Sorry, Kevin.

For “Time for Me to Fly,” Amato came out with a double-neck guitar, which was almost as mighty as his unfathomably huge soul patch. Then REO closed with “Back on the Road Again,” sung by Hall. 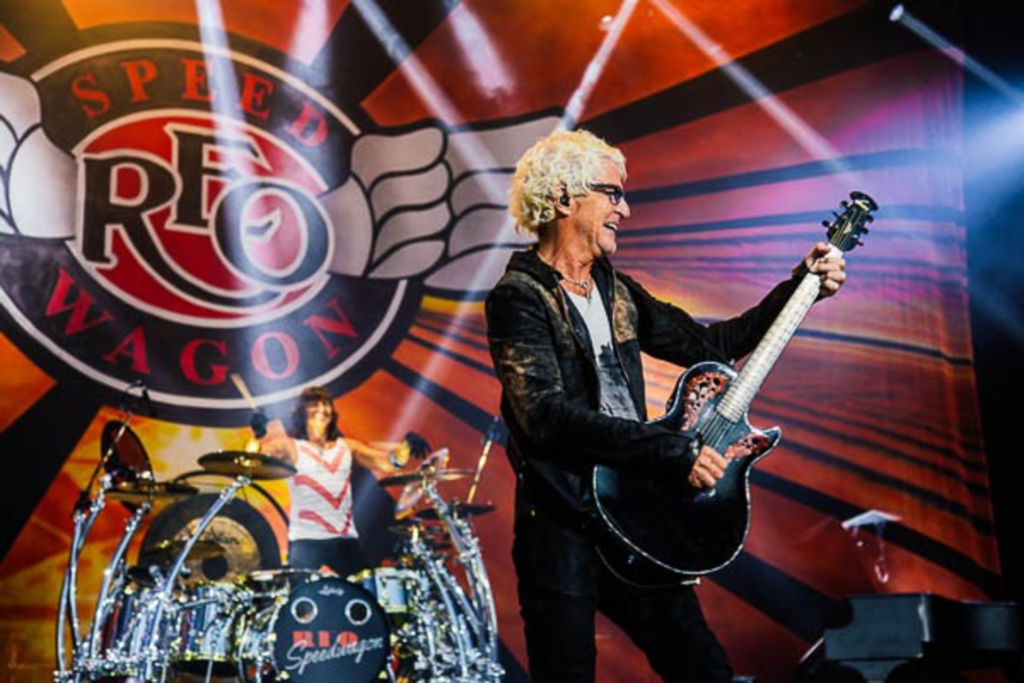 While Amato was off soloing on the other side of the stage, Cronin took his guitar to Amato’s abandoned mic stand and threw every single one of his picks to the crowd. With his white hair and pursed grin, it was like watching the Church Lady cut loose. Mischief!

Both bands turned out fun sets, but in the end, it was all prelude to that sweet 14-person encore. All hail Chicago Speedwagon — the classic-rock version of Arcade Fire.

Leftovers: Singer and guitarist-pianist Tim Stop opened the show saying, “You don’t know me or my songs and you’re still sober.” He gets it. He also played a cover of Michael Jackson’s “The Way You Make Me Feel.”

For a Chicago fan, few things beat the experience of hearing “Saturday in the Park” and responding to Can you dig it? with a heartfelt YES, I CAN!

Chicago set list
Ballet for a Girl in Buchannon
Make Me Smile
So Much to Say, So Much to Give
Colour My World
Questions 67 and 68
Dialogue (Parts I & II)
Now
You’re the Inspiration
Beginnings
I’m a Man (Spencer Davis Group cover)
Street Player
Just You ‘n’ Me
Hard to Say I’m Sorry/Get Away
Saturday in the Park
Feelin’ Stronger Every Day

Chicago Speedwagon set list
Ridin’ the Storm Out (REO)
Free (Chicago)
Keep on Loving You (REO)
Does Anybody Really Know What Time It Is? (Chicago)
Roll With the Changes (REO)
25 or 6 to 4 (Chicago)