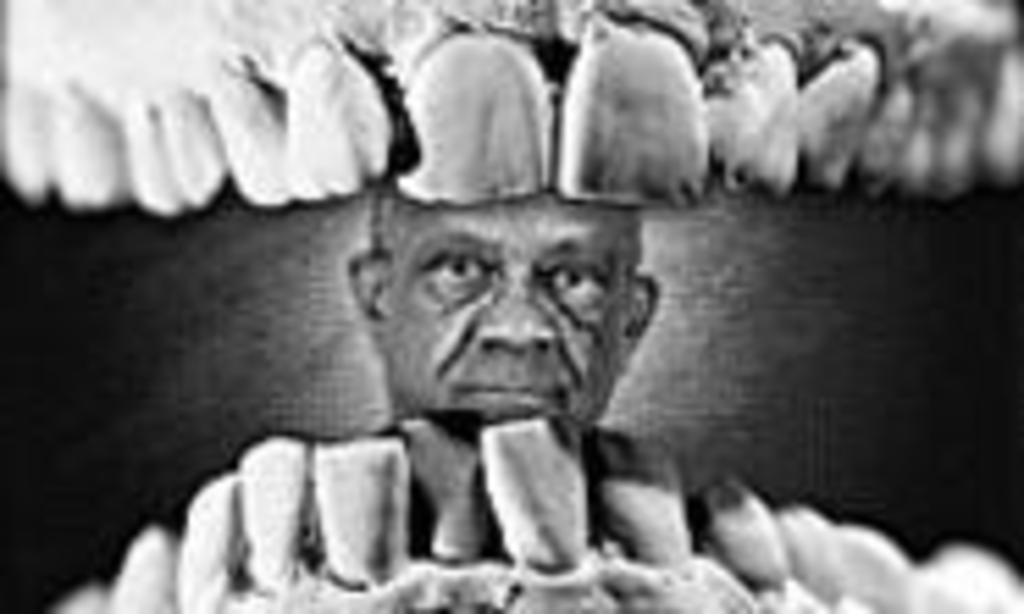 By his own count, dentist Vernon Rice had sexual contact with forty or fifty female patients in three decades. Some patients say they can only guess what happened while Rice had them sedated with laughing gas. But many of them remember unwanted sexual encounters.

Circuit Court Judge David Shinn has declared these Kansas City women to be bad citizens for not speaking up years ago — when some of them were children — regardless of their uncertainties. His criticism came after a dozen of them finally risked telling their stories during the 71-year-old dentist’s sentencing hearing last month.

“As early as maybe eleven years old, I told my sister, ‘Do you think that Dr. Rice kind of grabbed your breast?'” one middle-aged woman testified. “And she said, ‘Don’t talk about that. No.'”

Another woman told the court, “I just felt violated, and I had more cleavage [showing] than I did prior to going in. I told [my mother] I was sure that something was going on, but I couldn’t prove anything.”

And another said, “I was in a dream state. I never could just really … prove it or put a [certainty] on it.”

The testimony was intended to ensure that Rice received a hefty punishment after pleading guilty to having intercourse with a drugged patient one year earlier. But when the witnesses were done, the judge rebuked them.

“If this started back in 1971, and no one reported it to stop him from doing this sort of thing, that’s their fault, and they weren’t good citizens for not reporting it,” Shinn said. Then he kept Rice out of prison by suspending a seven-year sentence. Instead, Rice got five years’ probation and a $5,000 fine on charges of sexual assault, deviate sexual assault and sexual misconduct.

But at least two women Shinn heard before making his sentence should have passed his citizenship test. In September 1998, one of them went to police after she awoke from a nitrous oxide haze to find Rice moaning and fondling her breast.

“He had the drill in my mouth, and he kind of had his arm around me, and he was just squeezing my breast,” the woman testified at Rice’s hearing. “The nitrous oxide has you, like, in a dreamscape. He kind of kept trying to pull me closer to, I guess, get my head closer to his lap or genital area. I immediately got up and left the office and went straight to the police.”

Rice was found guilty of simple assault in municipal court, but he promptly appealed to circuit court, where city prosecutors dropped the charge. Shinn was assigned to hear the woman’s civil lawsuit, filed in April 1999 against Rice. Her lawyer dropped that suit in July 2000 a week before it was scheduled for jury trial. (The plaintiff’s attorney refused to discuss the case or any settlement.)

Another woman filed a police report against Rice in February 2000, alleging that she was assaulted in the dental chair. The patient became aware of Rice touching her breasts and rubbing himself against the dental chair while he administered nitrous oxide through a mask over her nose. After drifting in and out of consciousness for at least three hours, the woman awoke to find Rice’s tongue in her mouth and his hands in her slacks and on her breast.

“He did not rape me,” she tells the Pitch. “But the things he did do, the places he touched me, I was disgusted by it. He put his tongue in my mouth, and I will not forget that.”

Two weeks later, she reported the assault at the Linwood police station. Her experience there felt like a violation, too.

“The lady wanted me to shout through the Plexiglas what happened,” recalls the woman, who says that the clerk eventually came out to the lobby to take the report. “I didn’t want to scream through the little holes. They made me feel like crap, to have to describe what happened and how he went about it. That let me know why people don’t report certain crimes. You’re the victim, and they make you feel worse.”

She knew that her allegations would be difficult to prove. There were no witnesses because she had been alone with Rice. He was a professional who had been president of the Greater Kansas City Dental Association in 1996.

The woman’s report went to sex-crime detectives, but it was never investigated and was eventually filed as a “miscellaneous” report, says police spokesperson Bob Murphy.

“She never followed up on contacting us,” Murphy says. “In the report, she states what happened in her dental appointment, but she also states that she wouldn’t be able to identify the guy if she saw him.” Murphy says there were additional reasons that the report was not investigated but will not specify them.

Though the victim had named Rice as the perpetrator and his dental office as the location of the assault, that information was deemed inadequate for an investigation.

“Just because he’s at that address doesn’t mean he was the one that did it,” says Sergeant Carl Oakman of the sex-crimes unit. Oakman says that an investigator eventually contacted the victim, who didn’t want to pursue the complaint because she had filed a civil lawsuit against Rice. But the victim says she never heard back from police.

“I just filed a report and then left them to do their job,” she says. “I really felt like someone would follow up on it.”

The woman’s malpractice lawsuit against Rice for the incident was scheduled for a jury trial before Judge Shinn on March 25. After Shinn’s sentencing of Rice, her attorney quickly requested a new trial date and a different judge.

Shinn has reportedly retired after fourteen years on the bench, but he is expected to continue to hear overflow cases from the crowded court’s dockets. Shinn declined to discuss his decision with the Pitch.

Shinn has traditionally been “a very good judge,” says assistant Jackson County prosecutor Ted Hunt. He disagrees with the judge’s suspension of Rice’s seven-year sentence but insists that Shinn has done a lot of good for the Jackson County judiciary. “He’s been very tough on sex criminals and violent criminals historically,” Hunt says. In court, Shinn criticized the prosecutor as well as the victims.

“If the prosecutor wanted [Rice] to have fourteen years in prison, he should have charged him with rape,” Shinn said. “This is a Class-C felony, and that’s all he’s charged with. This is his first felony conviction, so this litany of prior activity really has nothing at all to do with this case.” Then he ordered Rice to stop seeing patients.

Hunt says he filed charges of sexual assault — instead of rape — against Rice for the March 2001 attack because Rice’s lawyers could have argued that the patient’s agreement to receive nitrous oxide nullified her charge. Even without a rape charge, the judge himself had rendered a seven-year sentence for Rice, then suspended it.

“Anyone who would tell you that what [Rice] was charged with isn’t enough is plain wrong,” says Hunt. “You’ve got fourteen [possible] years of penitentiary time exposure. These were serious charges, and they carry some serious time.”