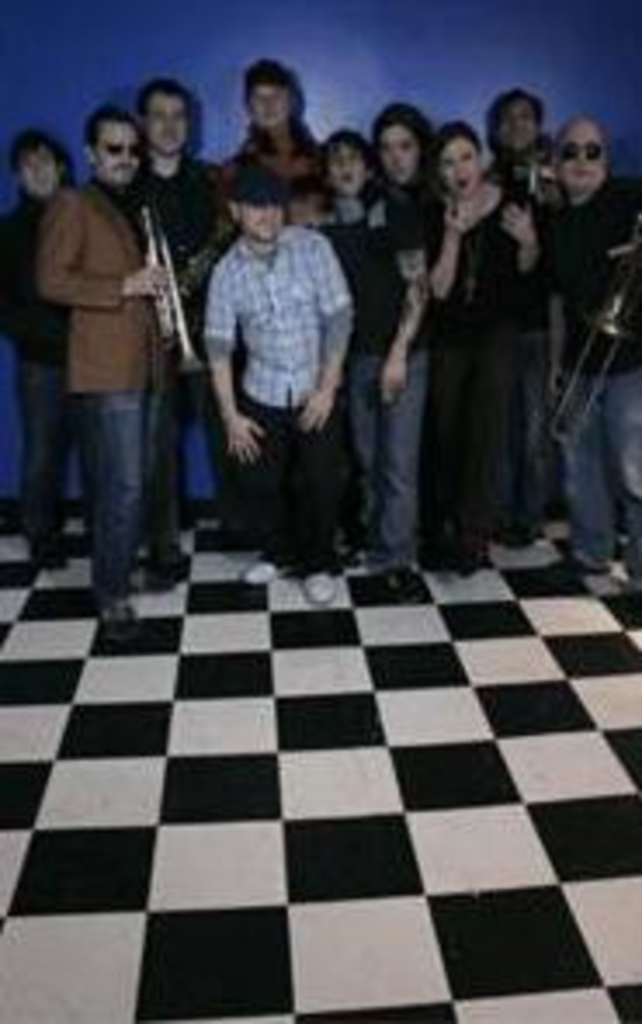 A sinister-looking man with a hood as ominous as the grim reaper’s stands next to another shady transient near the corner of 36th Street and Main — a questionable place for a female at night.

All that’s visible through the glass door of the beige brick building is an abandoned reception area. The men are getting closer. They are saying things — dirty things.

After a few uncomfortable moments, my knight in torn jeans, Zach Phillips, the diminutive but ass-kicking bassist for Kansas City band the Architects, appears and leads the way to safety in his band’s practice digs.

Tonight, however, it’s not the Architects who are refining their jams. Instead, the room belongs to the Sex Police, a brand-new act that Phillips formed with his brothers and co-Architects, Brandon and Adam, plus players from solid local bands Doris Henson (R.I.P.), Stella Link and 30 Minute Recess. Upon our arrival, they’re struggling to flesh out an ending to “Skylarking,” a cover that, on disc, fades out.

“Let’s Saturday Night Live it!” shouts drummer Wes Gartner, pounding skins again for the first time since Doris Henson’s sudden demise a couple of months ago. The seven (out of 10) coppers who made it to practice tonight nod, and they end the song with a rousing flourish that onetime SNL band leader G.E. Smith would applaud.

With that many musicians onstage, you’d think this was a freakin’ ska band. And you’d be right.

For those unfamiliar with the once-revered genre, ska was born in Jamaica in the early ’60s, giving rise to legends such as the Skatalites and Desmond Dekker. The music shares a rocksteady cadence with its offshoot, reggae, but with more prevalent horns and organs.

In the UK in the late ’70s, the genre rode a second wave with bands such as the Specials and the Beat, cutting records that were popular with blue-collar youth. These skanking children of the dole called themselves “rudies,” and they upheld a stringent dress code: Rude boys looked proper in tony suits and ties, and rude girls wore miniskirts and platform creepers.

In the ’90s, ska underwent a third rebirth, this time with a punk twist, as embodied by Cali’s Operation Ivy and its guitarist Tim Armstrong’s later band Rancid. No Doubt, Goldfinger and Reel Big Fish had radio hits, and, as had occurred with punk and grunge before, many fans cried sellout at groups tasting commercial success, renouncing their allegiance to the checkered flag of ska.

But before all of that, Kansas City had a sizable local ska scene all its own.

Ten years ago, the under-21 musical landscape wasn’t anything like it is now. Instead of kids checking out screamo bands with melodramatic names like To Kill Me So That I Might Bleed in fly-by-night venues resembling abandoned warehouses, yesterday’s punk and ska acts filled legitimate all-ages clubs such as the Daily Grind in midtown and Gee Coffee in Overland Park.

Ska was so hot locally that Gee Coffee proudly displayed a massive rendering of the Specials’ trademark black-and-white rude-boy image next to the stage.

“Even if the bands were bad, people loved it,” says Sex Police trombonist Mike Walker.

Because third-wave ska was heavily influenced by punk rather than soul music, horns and organs weren’t as necessary as before. Many of the bands didn’t even use those instruments. Soon, punk kids were calling anything ska.

He should know — he was in one of those bands.

Before Brandon and Zach and Adam played straightforward rock as the Architects, the young Phillips brothers were the Gadjits. The teenage impresarios from Johnson County caught Tim Armstrong’s attention, and he signed them to his Hellcat label in 1998, releasing two records and gaining punk-world acclaim.

Third-wave kids also mimicked the dress style of the wave before them. But, as Walker observes, “When you have something attached to a fashion movement as well, it’s only going to be cool for so long. At some point, you’re going to want to take off your skinny tie.”

Perhaps that’s why third-wave ska suffered such a severe backlash among its loudest champions.

“It got so bastardized, people were turning it into this really sick commercial product,” Gartner recalls. Aside from staunch traditionalists such as the Slackers and Hepcat, “Ska ate itself,” Brandon laments.

Many third-generation ska bands became unintentional parodies, giving themselves ridiculous names like the Skaskank Redemption and Multiple Skalerosis. No Doubt gave up its ska sound and became a new generation’s Blondie, and the Gadjits turned on Quadrophenia and turned into the Architects.

For a lot of these musicians, a checkered past was the dirty secret that meant loss of credibility when they were starting new bands.

“Going into an indie-rock band, it was always, ‘Ugh, you were in a ska band? Oh, God,'” Gartner says.

Like the Phillips brothers, most of the other Sex Police are local rude-boy alumni: Gartner and Walker were in Norman 360, organist Dan Bergner played with the Phillips boys as kids, and Stella Linkers Justin Warring and Dave Gaume were in the Lowbrows and the Bill Wennington Fan Club, respectively.

The only officers not skanking down memory lane are trumpet player Jimmy Sullivan of KC’s tribute to modern radio drivel, 30 Minute Recess, and lead singer Lori Demanche of party band Disco Dick and the Mirror Balls.

Luckily for these cops, in the past year, dub and reggae have slowly regained fans among the indie-kid set. But a scene whose members are more interested in making like mannequins during a live show may not be ready to embrace a band that leaves you no choice but to get your dance on.

The Sex Police don’t care. Kansas City ska’s finest have little regard for any cooler-than-thou crowd that snubs its noses at a fun nostalgia trip.

Eschewing the Gadjits’ punk feel and the novelty-act silliness that hinders the Aquabats, the Police return to ska’s traditional roots, rolling out covers of songs by the likes of Horace Andy, the Specials and the Skalars. “I got all my bass tricks from those bands,” Zach Phillips says.

“There was a time when it was ‘to play ska or not to play ska?'” Brandon Phillips adds. “Now I’m a grown-ass man, and I can do what I want. If I feel like playing ska, I’ll play ska. The rest of my existence is filled with career-related concerns, and this is a marvelous relief. It’s a hoot to play. It’s fun to make people dance.”