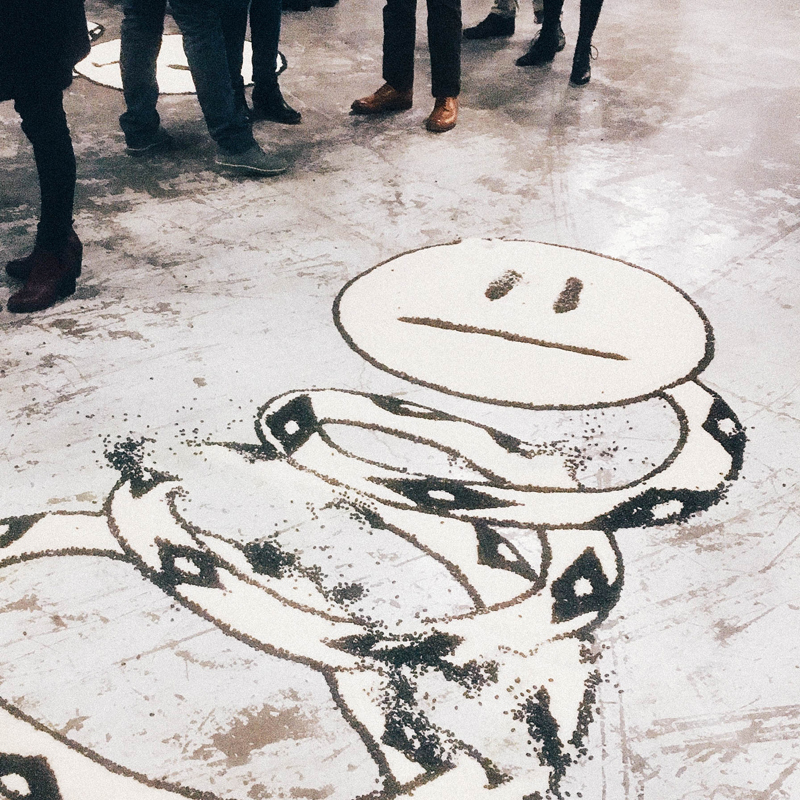 Starting with its title, Lynnette Miranda’s debut as the Charlotte Street Foundation’s latest curator in residence asks a question that lately has occurred to a whole lot of us: ¿Que Pasa USA?

The artists in this group exhibition address the state of American bicultural identity with works that channel not a little anxiety. The show lays out a meaty buffet of opportunities for discourse, full of dark humor and absurdity. Under discussion: the stress of ethnic ambiguity, the deepening hostility toward persons of color, the challenge of connecting with ethnic heritage. ¿Que Pasa USA? is, as you’d expect, diverse; it’s also challenging, and would have been even if it hadn’t been gone up just as the country’s political and moral future became, to a panic-inducing degree, far less certain.

Miranda has arranged the show that the first thing you step on inside La Esquina is the coiled body of the Gadsden flag’s “don’t tread on me” snake, rendered on the floor here with dried rice and beans. Instead of the rattlesnake’s forked tongue and fangs, though, is a passive, even vacant smiley face. It’s part of Enzo Antonio Moscarella’s trio, simply titled “Don’t Tread on Me,” and as you remove your foot from the edge of the art (or walk through unknowingly, as several people did on opening night), you notice two more identical bodies on the floor ahead. The smile becomes a straight, disapproving line through the face, then, in the third, a frown. This emoji of a serpent displays a limited but affecting range of emotion, and I could sympathize with its downward-trending mood: By the end of the opening reception, the rice and beans of its body had been scattered across the floor by the shoes of oblivious gallerygoers, the figurative blood and flesh — pointedly made from the food staples of a lower class — left uselessly spilling out of the broken edges. It’s a smart piece, easily among the show’s best. Moscarella conveys a potent message with the consumable medium, and the symbol’s seemingly out-of-tune association with the immigration-hostile tea party makes sense as you watch people disrupt the art as they move themselves toward the next piece. The cycle of construction, ruin and reassembly becomes an appropriate metaphor for a society that overlooks the needs of its contributing nonwhite citizens. 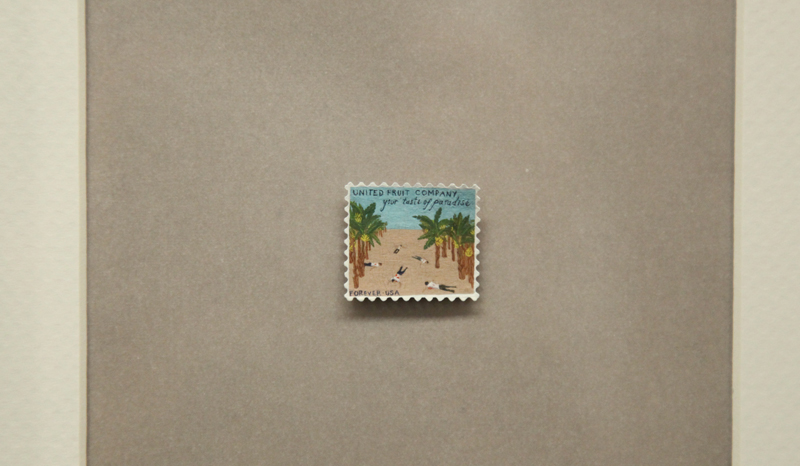 Maya Grace Misra’s “Forever” stamps take a sharp look at the impact of colonialism on a medium that immortalizes American cultural icons and events. The Thanksgiving stamp shows a cornucopia of food with a pool of blood spilling from the rim, aptly timed to acknowledge the season as well as the resistance in North Dakota. A United Fruit Company stamp scatters bodies about a banana plantation, little drops of red on their white shirts. The minute illustrations target matters of consumption and wealth through a medium of traditionally neutral communication, a reflection on the ways that radical ideas must master prevalent modes (and tones) of conversation to make themselves heard. 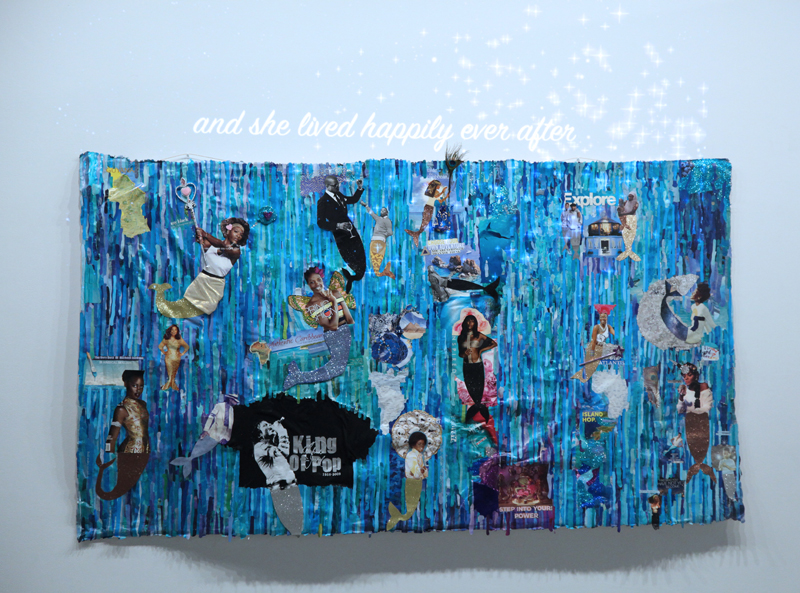 Damali Abrams’ “The Old Black Magic” is a glossy tapestry of magazine celebrities, their legs replaced with mermaid tails. Oprah laughs defiantly, her hands on the hips of her golden tail; Lupita Nyong’o, from her cover on Vogue, becomes a mermaid seen midleap, over a shimmering blue sea behind her. Mermen make appearances in tidy suits and sweaters, less glittery than the stars in dresses but equipped with tails nonetheless. “The Old Black Magic” as a title addresses myth, magic and the cinematic trope of the Magical Negro, a character device used to encourage the white protagonist with advice from a wise black person. A projected phrase flashes above, alternating pronouns: “And I/they/we/she/he/you lived happily ever after.” Happily ever after is not a widely attainable goal — especially, perhaps, to those whose histories and concerns go unrepresented in mainstream movie and TV culture. The power of “The Old Black Magic” is in Abrams’ ability to convey this dissatisfaction with amusing grace. 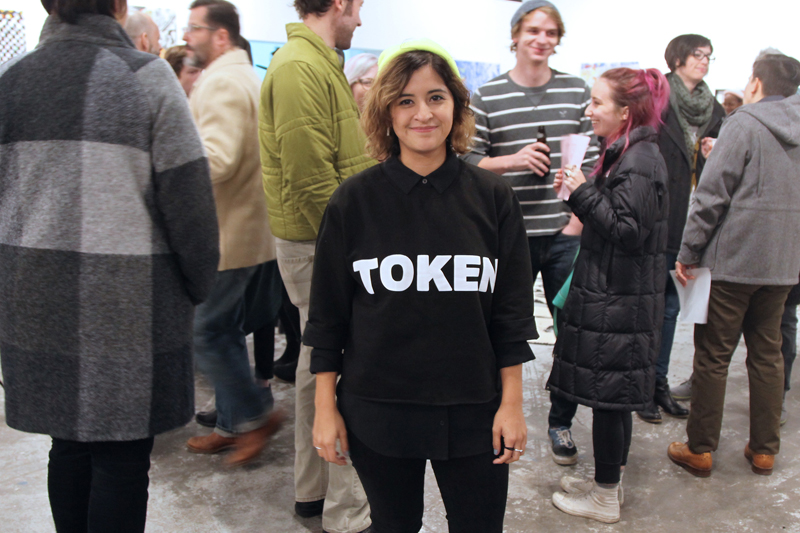 Other notable works here include Silvia Beatriz Abisaab’s “Kenia Balquier,” which engages the viewer with honey infusions, and Jaquelyn Carmen Guerrero’s “La Playa Sagrada/Glitter Beach,” an elaborate sandy shrine. Both indicate ¿Que Pasa USA?’s successful bringing together of opinionated artists who — like so many nonwhite Americans — recognize the tools of social change but lack broad amplification. It feels important that they’ve come together at La Esquina as citizens of different but similarly tread-upon cultural identities, but to ignite the conversation, someone needs to strike a match. These are bold displays of discontent, woven through with polite suggestions of what racial and political justice might look like if everyone were willing to listen and to cooperate.

The Big Rip Brewing Co. is hosting a Snake Bar pop-up throughout March