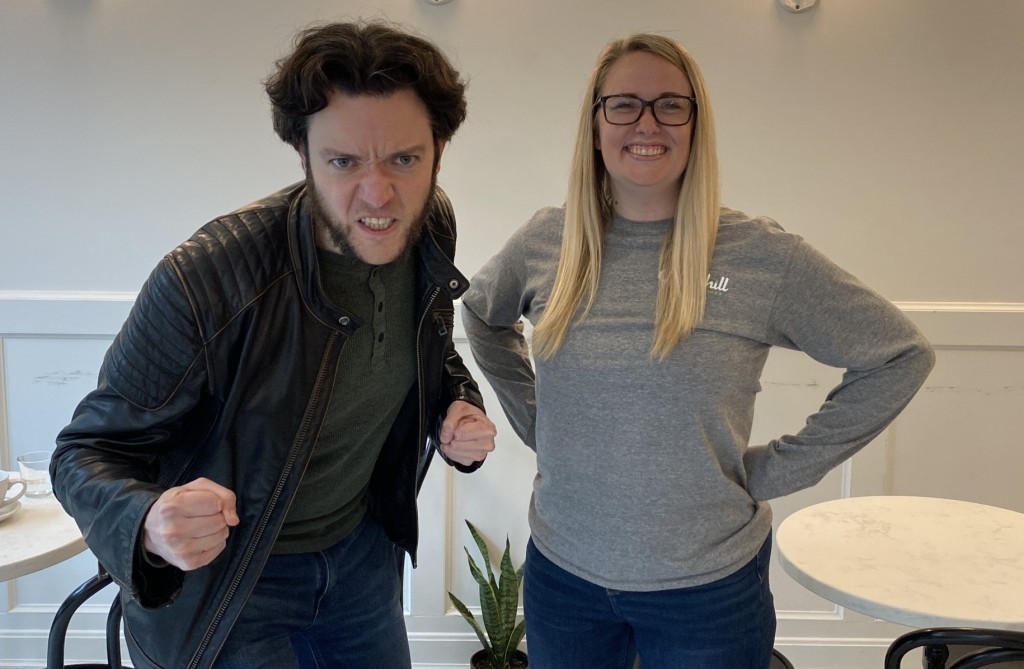 John Wigner and Caroline Nelson can summon their respective characters even while out of costume. // Photo by Lauren Textor

Flowing capes, brightly colored spandex, iconic insignias, and cunning accessories; a costume is only half the requirement when it comes to creating real-life superheroes like those of the Just-Us League, a local nonprofit that organizes cosplayers for charity events.

It’s easy to picture member relations representatives Caroline Nelson and John Wigner as their corresponding characters, and not just because of their ensembles. Nelson, who portrays Supergirl, is a sunshiney blonde with glasses.

Wigner is the embodiment of Wolverine on his day off, sporting dark sideburns and a leather jacket. Both joined the Just-Us League in 2019 and share a clear passionate for its mission to serve the citizens of the metro—and beyond.

“As far as the first event that I was really like, ‘This is where I’m supposed to be, I’m actually helping people,’ was when we went to Amarillo, Texas back in 2019,” Nelson says. “We try to do one hospital trip a year. We visited the Ronald McDonald House in Amarillo, and we had about 10 of us that went at least. We actually went into the hospital and got to see the kids and the families. Everyone was so excited and it felt good to bring that joy to families who had maybe been stuck in a hospital for a long time, but at least we got to be a bright spot in their day or week.”

“Amarillo was special,” Wigner agrees. “Camp Quality 2019 was a good one. It’s a camp for children with cancer who wouldn’t otherwise get to go to a summer camp in the area. We went and got to help out with superhero crafts with them. It’s just kind of magical to watch as they really enjoy interacting with you. Some of them are in on the fact that you’re a ‘superhero’ in quotes and some genuinely think you are that character. They talk to you like they’ve known you forever because you do portray that character. You interact with them on a level where they forget about any issues or problems that are going on and you see them as they really are, having fun.”

The Just-Us League has recently rebranded, but the organization has been around for years in one form or another. Founder, Chief Operating Officer, and Chief Financial Officer Brad Nottingham was introduced to cosplay in 2016 and soon began suiting up as Batman for charity events.

Nottingham met others with similar interests and missions, forming a group that began partnering with organizations such as March of Dimes, St. Jude Children’s Research Hospital, and Out of the Darkness. The group, which had previously consisted of only DC Comics characters, expanded to include those from the Marvel Cinematic Universe as well.

This past January, the Just-Us League became an official 501c3. Its membership has expanded and its structure has formalized with members stepping up to head event planning, marketing, and social media.

Thus far in 2022, members of the Just-Us League have attended more than forty events. Sometimes, there are two to three events scheduled for a weekend.

Not everyone has the availability to be a full-time member. Spotlight members attend events as they are able. But no matter the tier of membership, joining the Just-Us League requires commitment.

Nelson and Wigner emphasize the importance of staying in character at events.

“I’d say it’s very important to us that whatever character you are, you actually are that character when you’re at an event,” Nelson says. “One of the questions in our interview process is ‘Why is this character important to you and do you feel like you can do it justice?’”

“Batman’s whole thing was he chose Batman because it’s a character he’d identified with as a kid,” Wigner says. “He really loved the character and wanted to be only that. I’ve literally been cosplaying Wolverine at this point for 17 years. It’s a natural thing to be like, ‘That’s who I’ll do.’ It really is just about, ‘Is that a character you identify with?’ even if you haven’t cosplayed as them before.”

As far as costuming goes, Nelson and Wigner say that it’s up to the individual how much effort they want to put in, although the league does insist upon quality and accuracy.

“Some people like to make their costumes and some people prefer to buy them,” Nelson says.

“It can be very easy to shame people who don’t make theirs. The cosplay community as a whole is trying to get away from that. Batgirl made hers all herself where she thrifted some items from stores downtown and made her own touches where needed. It depends on the person’s preference and their skill level.”

Wigner also believes in supporting cosplayers outside of the charity realm. “We’ve met a lot of people who like what we do, they approve of it, they appreciate it, but it’s just not for them. That’s totally fine. There are a lot of people who want to do cosplay at events, but it’s more of like that’s their business. We have no qualm if people want to do it professionally, or, as we are doing it, for a charity purpose. There’s space for both to coexist.”

The support and inclusion that the Just-Us League insists upon extends outside of cosplay, too.

“We really are a family,” Nelson says. “And another one of our core values is that we really get along well with each other, we’re always there to help each other no matter what. Say someone’s car is broken down, we’ll make sure they have a ride to the event if they want to go.”

“Or if they need to move,” Wigner chimes in, smiling. “We’ve helped out with moving. But not in costume. The claws don’t help with that.”

The Justice League of DC Comics brought an all-star team of heroes together, and the Just-Us League intends to do the same. The organization sometimes collaborates with other charity cosplay groups, such as the 501st Legion, the Midland Empire Ghostbusters, and the Kansas City PotterHeads.

Although the Just-Us League isn’t actively recruiting, it is open for new members to join. Contact them through their Facebook page or at justusleague77@gmail.com.