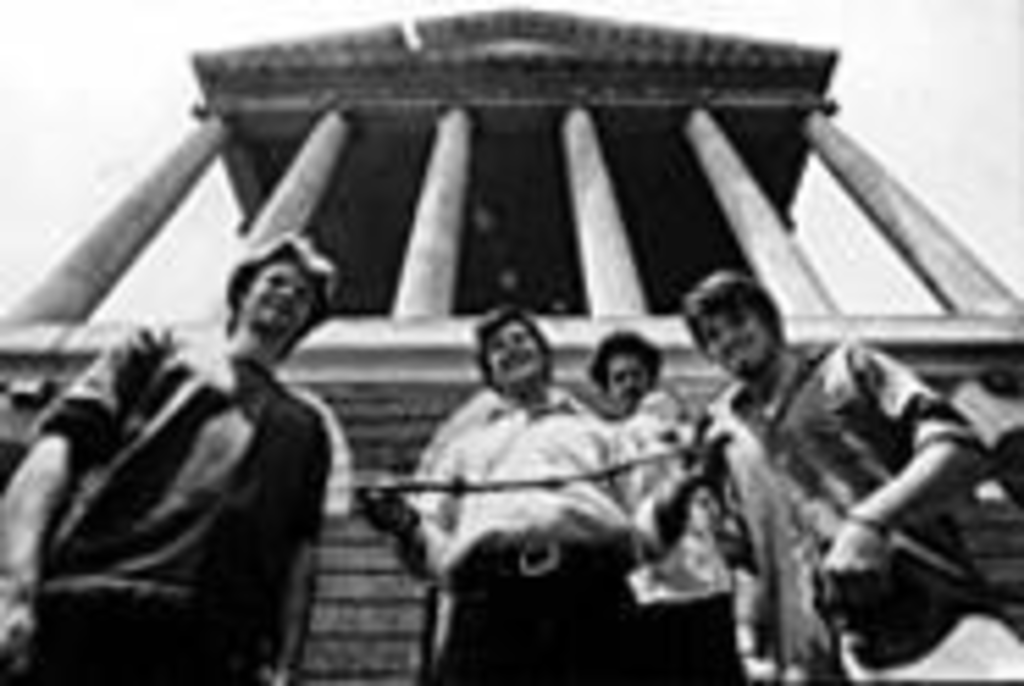 Ever have one of those secrets that you have to tell someone, and in turn, that person tells five people, those five people tell five more people, and before you know it, the whole town knows about it? The Dismemberment Plan might still be a secret to most music fans, but it’s the type that can’t be concealed for long. Sure, the group has already been together for years, opened for Pearl Jam, put out three discs and stepped in and out of major-label territory. But the road to fame is destined to be a gradual climb for a musicians who dare to carve out a distinct niche in the static indie-rock scene. Still, recognition ultimately seems likely for a truly adventurous group that incites the kind of constant dancing and shout-along fanaticism usually observed only when cover bands or jam-oriented outfits take the stage.

Hailing from outside Washington, D.C., a town known for its politically motivated music scene as well as its politics, The Dismemberment Plan sounds like few of its Fugazi-worshipping neighbors. In fact, the Plan is what so many eminently categorizable acts pretentiously claim to be — stylistically indescribable.

“You can dig out elements of The Beatles and Roni Size and Carole King and just about everything else,” bassist-keyboardist Eric Axelson says. Such name-dropping might rightfully inspire skepticism, but that fades after a few listens to the bizarrely beautiful songs on D-Plan discs such as ! and The Dismemberment Plan Is Terrified.

The group’s aptly named fourth LP, Change, streamlines its approach. “It’s a pretty big difference in sound,” Axelson admits. “It’s a lot more subtle than anything we’ve done before; maybe a lot more tasteful, too. I think some people might miss that.” “That,” in this case, would be The Plan’s freak-flag-flying forays into terrain marked by layers of squealing feedback, churning keyboards and scattered rhythmic shifts. Previous records balanced this mania with sobering sanity, but Change ditches the schizophrenic attack, focusing on clarity and coherence. “It’s where we’re at right now,” Axelson explains. “Part of it is getting older, part of it is new influences. We keep mentioning Joni Mitchell and Talking Heads and D’Angelo as reference points, which kind of says it all.”

Actually that barely scratches the surface. True, traces of folk, art-punk and soul turn up on various Change tracks, but many other influences, some barely detectable, contribute to the eclectic finished product.

In addition to tinkering with its sound, The Dismemberment Plan approached the recording process differently, preparing in advance a vision of what it wanted to accomplish in the studio instead of sifting through ideas during the sessions. “With a new hard-drive studio in our basement, we were able to prerecord things, break it down and figure out how everything worked,” Axelson says. “We also did a lot of click-track work [a precise way to eliminate rhythm discrepancies in drum tracking], which made us crazy, but when it’s all said and done, the songs fit perfect.”

Burning Airlines frontman and studio whiz (Shiner, Cry Baby Cry) J. Robbins helped tighten the group’s process. “We learned on our last record we needed a task manager, and that’s what he is,” Axelson says. “We went into this record knowing that and determined to have things locked down.” Previously, The Dismemberment Plan was an artful but verbose poet, unwilling to part with any of its imagery — even when that imagery altered meter and disrupted rhythm. But with Robbins acting as editor, the group let the excess air out of its breezier compositions, sharpening the focus on its lyrical strength: uncomfortably honest human emotion. Stories about dependence, instability and the frailty of life could add up to a bummer of a record, but singer Travis Morrison injects enough optimism into his delivery to keep the tunes upbeat.

The group’s positivity comes across even more vibrantly during its live show, when The Dismemberment Plan, more so than almost any other act, seems ecstatic about the opportunity to perform. All spastic dance moves and smiles, the group doesn’t take itself too seriously and makes a similar request of its fans. “Folks just gotta dance,” Axelson says. “I think people underestimate how much more fun a show is when everyone is getting down. Cities like Chicago and DC and Boston definitely bring the ‘fuck it’ party vibe to the shows, and folks are dancing with strangers and there just to have fun, not to be seen, or whatever. Bring what you will to the show — just check any self-consciousness at the door.”