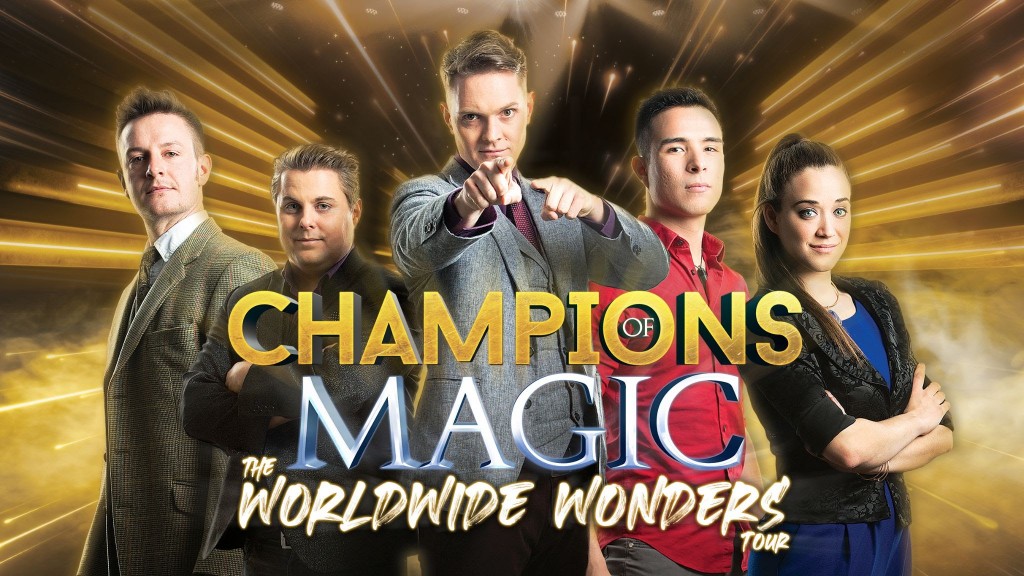 The Champions of Magic, a UK-based five-stack of world-class illusionists, looks to bring an especially memorable evening to town when they perform at the Kauffman Center Oct. 31.

While that day is of course Halloween, the more relevant emphasis on this particular date is that it will also mark the 95th anniversary of the death of legendary escape artist, Harry Houdini.

In honor of this milestone, the touring group’s resident escape artist, Fernando Velasco, will look to recreate Houdini’s most famous escape from the infamous water torture cell as the show’s finale.

“Fernando goes in by his ankles, headfirst into a tank of water, and then it’s locked with four padlocks. It’s a very dramatic moment in the show. The moment when he’s hanging above the water and he’s about to go in—you can hear a pin drop in the theater, usually, at that point,” Richard Young, the group’s illusionist, says.

The last time that Young and his team—now in its eighth year of international touring—had been in the Kansas City area came in 2017 during the inaugural United States tour when the group came to Emporia, KS. Since then, the pandemic has tabled any sort of return prior to this season. Current plans have the latest iteration of the show going on a four-year run.

Young and his partner, Sam Strange, who started off their careers as rival magicians in Oxford, England serve as the group’s pair of grand illusionists. Their act includes a flair of postmodern awareness one might not expect from the medium.

“We do the big scale magic, but I like to think we’re the only illusion act in the world with some self-awareness of just how silly it is—the idea of doing big box illusions in 2021. We very much put a comedic twist on it and just have a lot of fun with it,” Young says.

The pair will play homage to the campy illusionist acts of the 1980s, complete with “the silliness of silly costumes and dramatic poses” and live animals like elephants and tigers.

“Our act is very much a parody of those illusionists from the past, we very much do a sort of tongue in cheek approach to it, but at the same time I can promise that the magic itself is spectacular,” Young says.

Anyone in attendance in Emporia for the last Champions of Magic tour can expect to see a completely different setlist of tricks and feats from the current lineup. The crew also includes Kayla Drescher, named ‘The Next Great Magician’ by David Copperfield on The Today Show, and cold-reader Alex McAleer.

“Unlike a musical or a production show, like you might see on Broadway, magic shows are very much changed by osmosis. So they have more in common with a stand-up comedian’s show in how [they will] write new jokes all the time and filter out the older ones and put in the newest,” Young says.

Young looks forward to performing for American audiences because of the “high standards” to which they have become accustomed to as the home country of the G.O.A.T. magician, David Copperfield.

While Copperfield’s work is still quite popular in the YouTube age, Young adds that one doesn’t have to be a magic superfan to appreciate what the Champions of Magic bring to the table.

“It’s a big spectacular magic show with acts from all around the world that is suitable for everyone. You know, whether you’re a couple on a night out, or you’ve got young kids, the wonderful thing about magic is everybody can enjoy it,” Young says.

Tickets for the show can be purchased here.