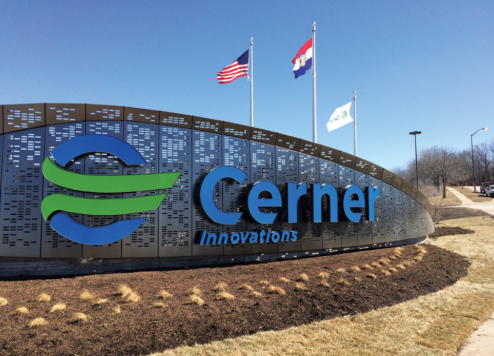 The Economic Development Corporation of Kansas City, an agency that administers tax breaks, announced today that Cerner is wrapping up loose ends on what’s been described as the biggest tax increment financing subsidy in U.S. history.

This latest bit of news isn’t really news. Everyone knows that Cerner bought up parcels at the old Bannister Mall site from Cerner executives who owned them before, with plans to build a soccer stadium. That was until Wyandotte County and Kansas showered them with more tax breaks and incentives than Missouri could come up with, so now Children’s Mercy Park exists in western Wyandotte County instead of in southeast Kansas City.

Instead, Cerner has already gotten started on a $4.4 billion office-complex project. Tax-increment financing, which diverts future tax revenues that would otherwise go to Jackson County, the Mid-Continent Library System, Hickman Mills School District and others, accounts for $1.7 billion of the total costs for this project.

In a lot of ways, the Cerner TIF does what TIF was meant to do. The Bannister Mall site is genuinely blighted. By leveraging TIF, Cerner says it can create 16,000 new, high-paying jobs for Kansas City.

But the Cerner TIF is still worth scrutinizing well into the future. For one thing, the EDC’s press release notes that the TIF includes an “unprecedented” $8 million fund. Of that, $2 million is earmarked for a “neighborhood improvement and infrastructure plan” for nearby enclaves. The other $6 million is for a “Hickman Mills Educational Studies and Innovation Program.”

Those sound nice, but the press release notes: “Details of both programs are still being worked out.”

When I was sniffing around this TIF project last year for a story The Pitch published in September, I remember talking to Hickman Mills school board members who didn’t know much, if anything, about the $6 million, what it would be spent on, how it would be administered, and so on. They wanted to know what I knew. Months later, it seems that goals for the $6 million fund remain unclear.

And the $2 million infrastructure program is worth keeping an eye on as well. A similar fund was established when Kansas City and Jackson County built the Swope Soccer Village. That project was a classic moment of government officials getting their hands caught reaching for the cookie jar. Kansas City officials, particularly then-Councilwoman Cindy Circo, wanted to take money left over from an old TIF project to fund new soccer fields and an upgrade to the training facility for Sporting Kansas City (a team owned by Cerner executives. Seeing a pattern here?).

Mid-Continent Library CEO Steve Potter and Raytown Quality Schools Superintendent Allan Markley raised loud protests about using their funds for a project that would deliver no benefit to them. The city and the county finally relented and worked out a deal to fund the soccer complex together while holding the other taxing jurisdictions mostly harmless. And to quiet residents in the Swope Ridge Neighborhood, who were promised new sewers as part of the Winchester TIF plan from the early 1990s but never materialized, the EDC set up a homeowner-improvement grant program for residents (which came with strings attached, like liens on their property and requirements for matching funds) and a plan to widen the dangerously narrow Bennington Road.

Right now, the Bannister properties generate $400,000 in property taxes, which will continue to go to taxing jurisdictions for the next 23 years. EDC bean counters predict that figure will grow to $3 million when the properties return to the tax rolls. That’s assuming the TIF gets terminated at the end of 23 years. Kansas City has a long history of finding ways to prolong TIF plans.

And who is to say that, after 23 years, Cerner won’t take stock of its aging buildings and decide it’s time to put up new offices somewhere else with a government willing to help them out?