Centering myself at Brioche Pastry Shop 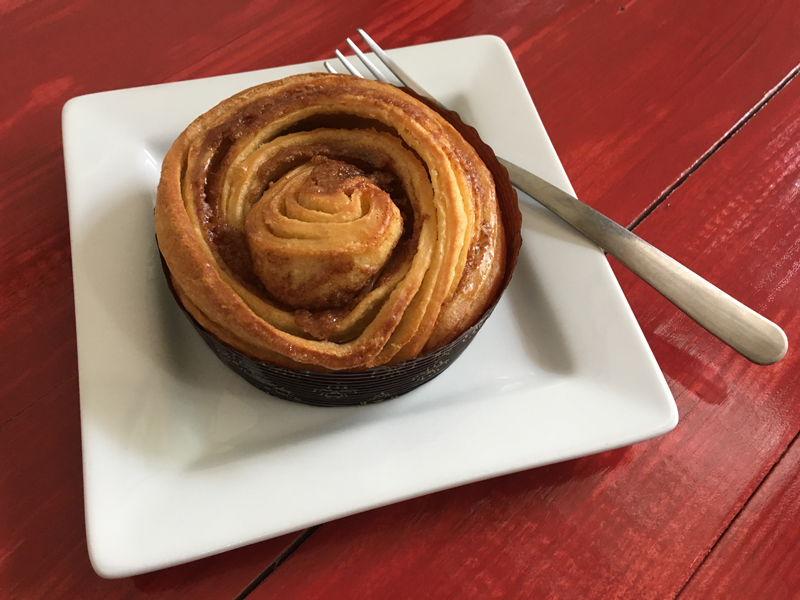 There’s no wrong way to eat a cinnamon roll — but some methods are better than others. When I stopped by Brioche Pastry Shop, a Jefferson City transplant that moved to its Main Street location about a month ago, I observed at least three different techniques for devouring the bakery’s sumptuous centerpiece item.

The woman to my left cut into her swirl of cinnamon-dusted brioche with the side of her fork, creating one pielike slice at a time, seemingly oblivious to the fact that the middle is the best part and must be saved for last. The woman to my right — well, I believe she employed the rare but undeniably effective one-bite method. When I first sat down, I glanced in her direction and nodded, tacitly acknowledging our mutual revelry. When I looked back a few seconds later, the entire pastry had astonishingly vanished from her plate.

Somewhere in between is my approach, which involves using the bare hands to slowly peel back each layer until only the middle remains, soft and vulnerable as the center of a rose. This, the core, must be eaten in silence, eyes closed, with monastic reverence. It’s not every day, after all, that I allow such a deviant spike in consumption. But when a new bakery opens, exceptions must be made.

Brioche’s cinnamon roll demands this kind of loving attention. Made by chef Brandon Kelley, who co-owns Brioche with his wife, Ida, the dough is flaky and soft in all the right places, the flavor both buttery and light. The warm swirls of cinnamon, butter and brown sugar cling to each spongy layer like frost on a winter window, a delicate dusting that flavors each bite without overstaying. There’s no frosting to be found, but you won’t miss it.

The cinnamon roll pairs well with Gray Duck Chai’s nine-spice blend, but Brioche also serves Columbia-based Shortwave Coffee. On the day I stopped by, business was steady, with several people sitting at the red tables facing the windows and a few others trickling in and out. With a prime Crossroads location right off the streetcar line, I would have been more surprised to find the shop empty.

Though everyone around me that day opted for the cinnamon rolls, the menu does promise other delicious-sounding items, such as sticky buns, scones, almond and chocolate croissants, and a couple of savory options. On my way out, a man and a woman browsed the pastry case, looking understandably indecisive.

“Everything is low-calorie, of course,” the man said. “No worries there.”

“Try the cinnamon roll,” I said as I whisked out the door, proud of myself for giving such good advice. No matter your method for deconstructing this delectable treat, the only mistake would be not eating it at all.