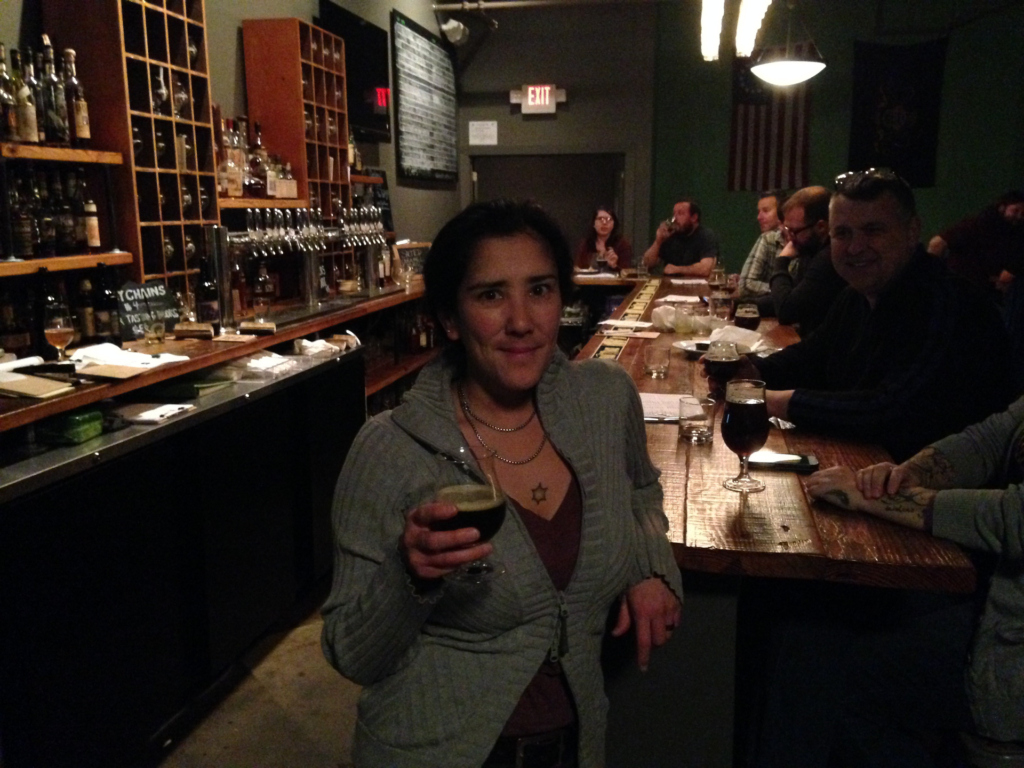 Chef Celina Tio is busy. Her phone won’t stop buzzing on this Wednesday evening. She breezes through her downtown bar, the Belfry, stopping to chat with drinkers sipping the blend she put together with Jolly Pumpkin Artisan Ales. Then she has to run out of the building to tell a tow-truck driver to stop hauling cars out of her lot — cars parked for Mayor Sly James’ birthday party, a fundraiser being held next door.

Tio tapped her Jolly Pumpkin blend earlier in the day, and plenty of people have come to the Belfry to sample the sour beer. The towing situation squared away, she’s ready to chat with me about the blend, which is still on tap at the Belfry (1532 Grand), and her future brewing plans.

Tio says she contacted Jolly Pumpkin a few years ago as a fan of the company’s beers who wanted to do an event with the brewery. But Jolly Pumpkin had stopped distributing to Missouri.

After a couple of years, Jolly Pumpkin returned to the Show-Me State, and Tio again inquired about booking a beer dinner with Ron Jeffries. Jolly Pumpkin’s brewmaster doesn’t usually do dinners, which often are “laden with all pork,” Tio says. But Tio and Jeffries decided to do the dinner while Jeffries was in KC for Boulevardia. Tio next pitched the idea of fashioning a blend together. Jeffries answered that he’d had the same thought.

So Tio set off for Dexter, Michigan, where Jeffries laid out seven beers for her to blend, among them Madrugada Obscura, Lupulo de Hielo, and Roja de Kriek.

“We tasted through, and I started doing my thing and pouring what I wanted, and he started doing his thing,” Tio says. “I tasted his, and he tasted mine. I was like, ‘I’m thinking this and I’m thinking that,’ and we just met in the middle and came up with something that we both liked, and that’s it. I’m really happy with it.”

Tio adds: “It’s like going to a farmers market and having a table full of ingredients, and then I just decide what is my base flavor and what are my two supporting flavors. That’s how I go about blending.”

In the end, Madrugada Obscura, Lupulo de Hielo, and Roja de Kriek all made it into the final blend, which is now listed on the Untapped app under two names: “The Forgotten Tales of the Last Gypsy Blender Vol. 2” and “Chef Tio’s Sour Blend.” Tio expects the blend to last for three or four days. Then, she’ll wait a week before releasing another keg.

While Tio was in Dexter, Jeffries asked if she wanted to help brew a beer. Of course she did.

“We did a 10-barrel batch, and about a month later, while it was aging in barrels, he said, ‘Oh, I really like it, so I decided that I’m going to do a 100-barrel batch,’ which means that he is releasing it to the entire country,” Tio says. “So every market is going to get a beer that I contributed to, and that’s going to be super-freaking cool.”

She’s not sure when the beer, which she says features “mango tamarind with a little bit of rye in there for balance,” will be released.

Next week, Tio heads back to New Belgium to do a third blend with the Fort Collins, Colorado, brewery. “That’ll probably release in February,” she says.

And she wants to brew more in the future. “I want to work on that,” she tells me. “I just don’t have the liquor license to do that now. But I do want to brew — and just brew for here [the Belfry].”

Tio says she’s interested in brewing small batches — using a one-barrel or three-barrel system — for the Belfry and Collection, her adjacent restaurant.

“It’s just another medium for a chef to put flavors together,” Tio says.