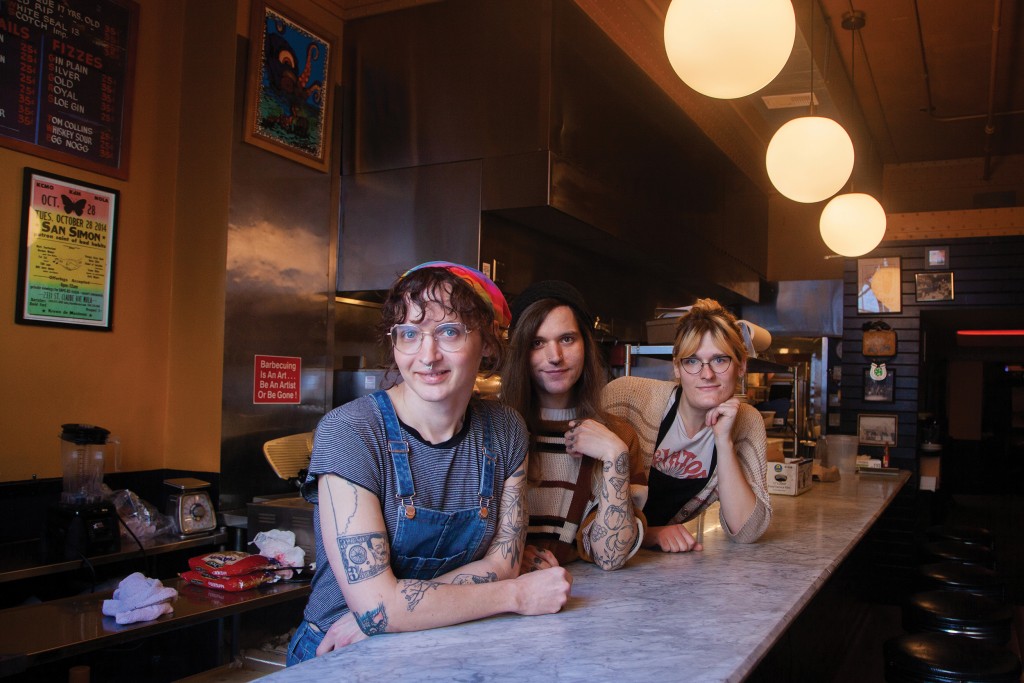 Olive Cooke (left), Sylvia Metta (middle), and Kim Conyers (right) stand in the back kitchen of The Ship, where their eatery serves up plant-based comfort food. // Photo by Liz Goodwin

Both carnivores and herbivores alike may find their taste buds enchanted by the sandwiches, loaded tater tots, and more at the West Bottoms-based Cauldron Collective. The secret to their food with magical flavor is simple: a whole lot of vegetables.

Kim Conyers, Sylvia Metta, and Olive Cooke are the self-described “kitchen witches” behind this plant-based comfort food concept. Originating as a pop-up shop inside Cooke’s house, the trio soon found the demand was there for a more permanent location. They now serve out of The Ship on Mondays from 11 a.m. – 6 p.m.

Thus, the collective was born.

All three of the chefs had their hands in the omnivore, vegan, and vegetarian food worlds for years, and they had some gripes with the traditional business model. Then they decided to do it their own way.

Conyers describes the collective model as a more equitable way of running a business than other capitalist methods. There are many different ways to run a collective, but Cauldon focuses on all members having an owner-operator title, therefore owning a portion of the business and having a vote to cast on big decisions.

Due to the size of the company, all of them have to come to an agreement before they move forward with a choice. 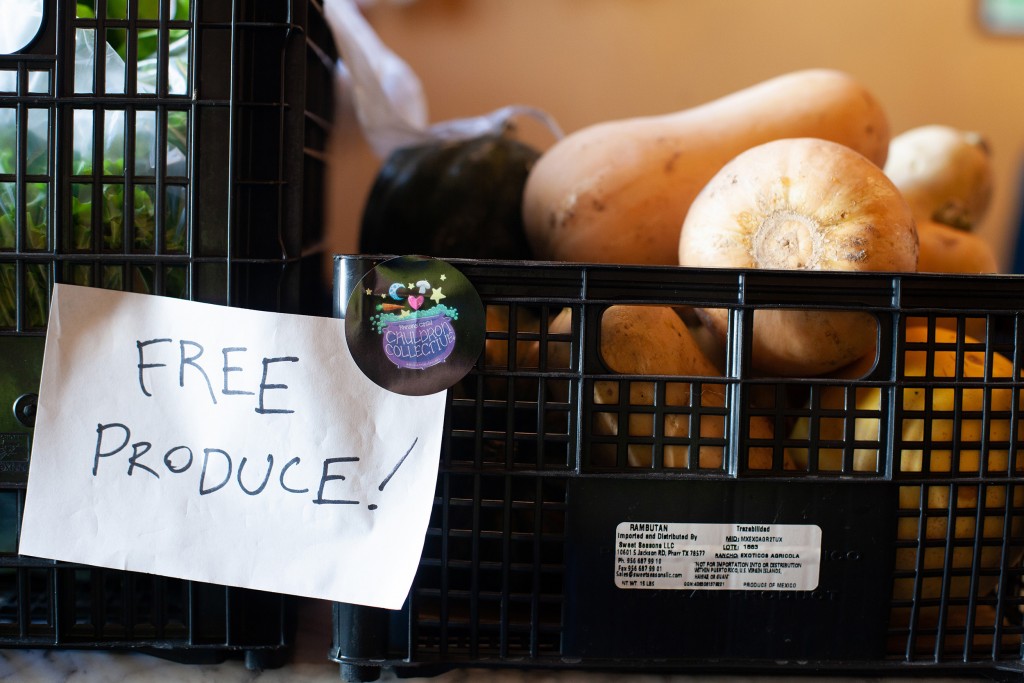 Free produce at The Cauldron Collective. // Photo by Liz Goodwin

“I was working with different restaurants and was getting really passionate about workers’ rights, and there are a lot of things specific to the restaurant industry that can make it hard for things like unions to exist,” Cooke says. “I had management roles where a lot of my job was figuring out how to give my friends and co-workers enough hours to survive and stay within the budget I was given, and there was no way to do that without breeding some kind of power issues. But then I started looking into collectives, and it just made sense as a business model for a restaurant.”

Although it’s just the three of them now, the group fully intends to hire others when the time is right. After someone has been a team member for a trial period, their name would be added to the LLC and they would have a say in the voting process. In turn, employees feel more appreciated and have a more personal approach to their employment.

“Every employee would be putting in the effort as if they owned the business because they literally do,” says Conyers. “In theory, under a capitalist sense, it produces the best possible products because every single person has a personal investment.”

The witches’ business philosophy also packs a flavorful bite. Their biggest mission is to let the world know they cook with vegetables, and lots of them. 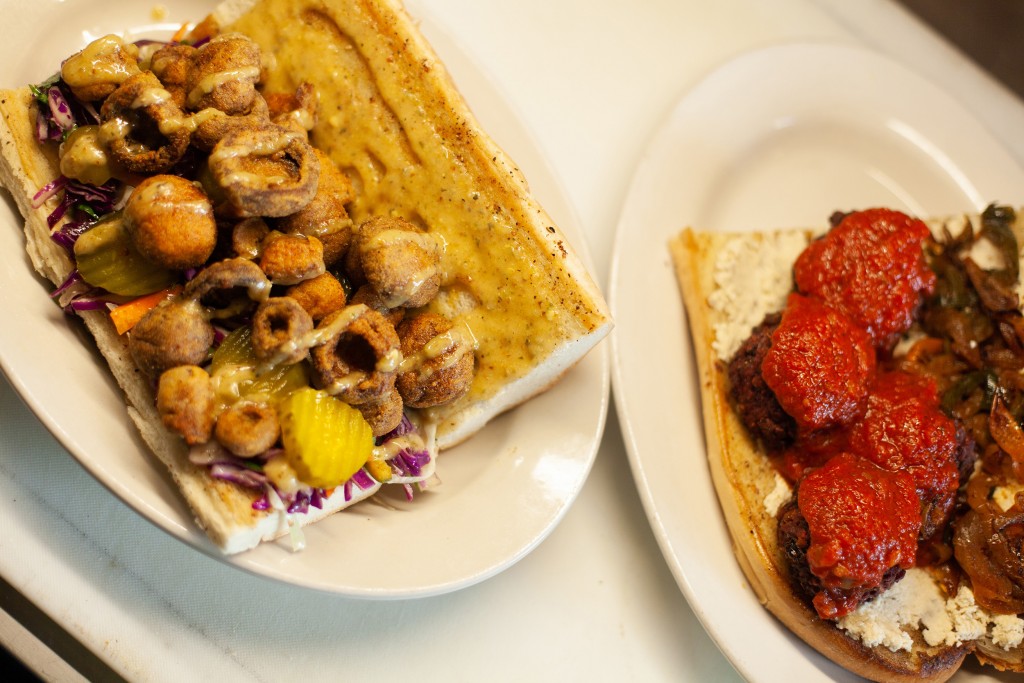 On the left is Cauldron Collective’s Mushroom Po-Boy with battered and fried mushrooms, scratch remoulade, slaw, and pickles on a sub roll. On the right is the collective’s Beetball Sub with lentil and beet balls and sunflower “chz.” // Photo by Liz Goodwin

Rather than trying to imitate meat, they enhance the natural heartiness of mushrooms, beets, lentils, and more to give people healthy(-ish) options that don’t compromise on taste or texture.

Perhaps their most loved appliances are their smoker—something that gives veggies a punch that can often be missing from plant-based dishes, according to Metta—and of course, their fryer.

“We show vegetables as vegetables as opposed to trying to make them something else,” Conyers says. “That’s the biggest inspiration we try to hold behind what we make. But, we use a deep fryer a lot.”

The menu rotates each week, but it always consists of sandwiches and sides, otherwise known as “witches” and “familiars.” Creations include “Beetball” Sub with lentil and beet balls and sunflower “chz;” Mushroom Phillies with smoked mushrooms, peppers, and onions; and fried Mushroom Po-Boys with fried mushrooms, bread and butter pickles, and a creamy plant-based remoulade.

Sandwiches are accompanied by sides such as Sweet Potato Mac, Cheezy Tots, or even seitan-loaded Corn Dogs. Many of the dishes feature seasonal ingredients when available.

The collective is loving where they’re at on their business journey but is also looking ahead to the next steps. The trio says they would love to open their own spot for patrons to eat, hang, and relax at all hours, hopefully featuring live music and events. They also aim to provide a queer space for people to enjoy that isn’t just a bar. 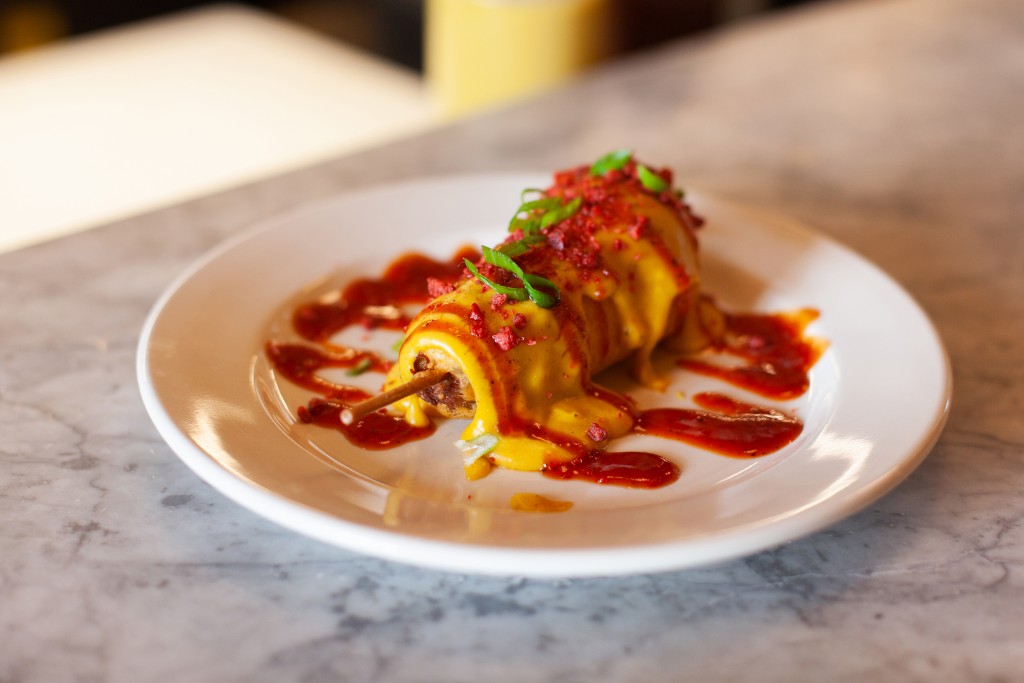 The witches—who are all trans women—hope to not only establish a place that doesn’t revolve around alcohol, but is also not just cisgender male-centric. The goal is an inclusive space for the entire LGBTQ community.

“You don’t want to sound like the boring mom saying, ‘no drinking,’ but maybe we won’t have liquor or put a huge focus on drinking. That can be hard to find [in queer spaces],” says Conyers. “We want it to be a place where people can study with friends and work on art in a creative space. We’re also aiming for a late-night thing too because that’s difficult to find for plant-based food.”

Spreading the joy of plant-based eating is a top priority for the people behind the Cauldron, but at the end of the day, so is supporting the vegan food community in Kansas City.

The collective is in a discount circle with other vegan eateries including Kind Food and Dead Beet Eats. They also plan to participate in a friendly chili cook-off with Dead Beet—just some of the benefits of being involved in a society of vegan and plant-based restaurants.

“We are definitely [supporting] each other inside of this collective,” Metta says. “But a big part of our goal is to stimulate the community in the same way it stimulates us.”

The eatery does online orders through its website for pick up at The Ship but is also newly open for dine-in at the same location. Weekly offerings and other wickedly delicious snapshots can be found on Cauldron Collective’s Instagram