Catching up with the Urge, torchbearers of a bygone regional rock scene 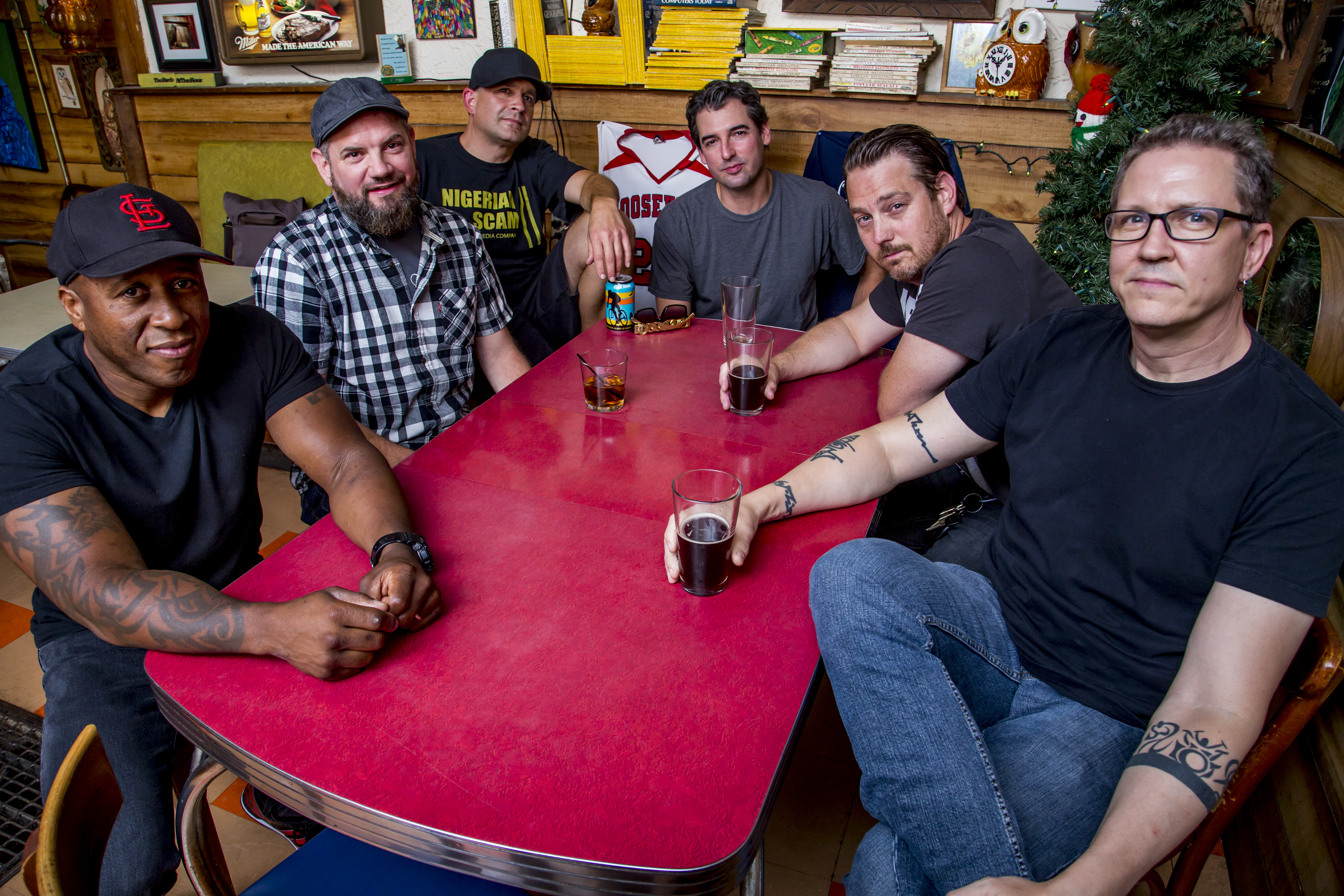 “We played a lot, so it wasn’t just that you heard the record — you saw us a lot,” Ewing (left) says of the band’s Nineties heyday.

Not long after St. Louis funk-punk hard rockers the Urge formed more than 30 years ago — 1988! — the band started regularly making a trek west down Interstate 70.

“As soon as we got cars, we were coming through Columbia, Kansas City, Lawrence. We’d throw in Omaha once in a while,” says frontman Steve Ewing says by phone, following a busy lunch rush at his St. Louis restaurant Steve’s Hot Dogs & Burgers.

By the mid-’90s, when the Urge released its breakthrough album, Receiving the Gift of Flavor, the band was frequently performing at the Bottleneck and receiving major airplay on Lawrence’s alternative radio station, 105.9 the Lazer. The band was such a fixture in the Lawrence scene that its song, “Take Away,” kicked off the Lazer’s local music compilation, Big Sandwich, when it was released in 1995.

So I remember being surprised to discover, around that time, that the members weren’t local to Lawrence. Instead, they were part of a regional rock scene that no longer exists, a network of Nineties bands with overlapping audiences, if differing sounds.

“We were playing the same venues,” Ewing says of his contemporaries in other small Midwestern cities and college towns. “There were parties and festivals, so you’d see each other a lot. You end up on a lot of the same shows. [Longtime Lawrence and KC music promoter] Jeff Fortier did a lot of the shows where we’d all be on the same bill. It just ended up being a lot of bands that you’d see all the time.”

Lawrence became the Urge’s home away from home due to one simple reason, Ewing explains.

“We’d go to Kansas City, but there was mostly 21-and-up bars, so you couldn’t do punk shows or all-ages shows,” he says. “Fortier was booking shows [in Lawrence], doing punk at the Outhouse and the Bottleneck and a few other places that he would find here and there. So it was a place where bands that were not cover bands or bar bands could play at.”

Over the years, the Urge has released quite a bit of music, but the three albums the band released between 1995 and 2000 are the ones that seem to resonate most. (Receiving the Gift of Flavor turns 25 next year.) During this heyday, the Urge’s shows were Fishbone-level exercises of onstage insanity; you worried that Ewing was one misguided jump away from breaking his neck.

“It was just a different time,” Ewing says with a laugh. “It was wild. Everybody was trying to outdo each other, stage-wise.”

One of the bands the Urge was competing with in those days was a rising, reggae-tinged alternative act from Omaha called 311. Eventually, 311’s popularity would eclipse just about every ‘90s band in the Midwest. But the band’s relationship with the Urge persevered through its meteoric ascent. The Urge played 311’s Caribbean Cruise back in March, for instance. Ewing thinks the bands’ connection persists partially due to all the fond memories of their performances together 25 years ago.

“People remember those shows,” he says. “People continually ask us to play together, and we jump on it and we take it. It’s a party, and we love it.”

He goes on: “We played a lot, so it wasn’t just that you heard the record — you saw us a lot. It became something endearing, like, ‘I see these guys live, and sometimes I hang out with them.’ And that’s a big thing, you know?”

These days, Urge members have settled into their largely post-band lives; Ewing’s restaurant, which he opened as a food truck in 2008 and a brick-and-mortar establishment a few years later, now has two locations. But they’re still releasing new music, albeit at a leisurely pace. The Urge’s last album, Galvanized, came out in 2013. But last year they recorded a goal song for the St. Louis Blues hockey team, and they’re still chipping away at new material.

“We just release things when we finish them, you know?” Ewing says of the Urge’s future plans. “It might be a single here, or a few songs there, and then maybe radio stations take a stab at them and see how they go. We’re not pushing sales, so it’s a different vibe altogether. We’re not worried about charts or checking sales figures at the end of the week. We’re not on a major label anymore, and we’re not pushing music for retail. So it’s about playing the show and doing the best that we can, performance-wise.”

The Urge. With Six Percent and One Flew West. Friday, August 23.