Cat on a Hot Tin Roof, at the MET, lands on its feet

“Why is it so damn hard for people to talk?” Big Daddy asks in Act 2 of Metropolitan Ensemble Theatre’s Cat on a Hot Tin Roof. The question is rhetorical, but just then, I suspect, many in the audience must have wondered the same.

Big Daddy and his family members inhabiting Tennessee Williams’ Pulitzer Prize-winning play do a lot of talking — and lashing out — but that doesn’t necessarily get them the answers they seek, or the connection they desire. And so, more than six decades after Cat‘s premiere, the drama still exerts a compelling hold. In remarks before the play’s start, director Karen Paisley said she wanted to produce this classic for those who had never seen it. Throughout the evening, the audience collectively left no doubt it was grateful for that decision. Cat on a Hot Tin Roof finds MET at its best, a tightly directed and paced show and an outstanding cast.

Scott Cordes is Big Daddy Pollitt, a wealthy cotton planter in 1955 Mississippi whose clan is gathered at the estate to celebrate his 65th birthday. They and his doctors have allowed him — and his wife, Big Mama (Kelly Main) — to believe that his tests for cancer were negative. Just a “spastic colon,” he says, much relieved. In reality, he’s facing certain death. That sort of “mendacity,” as this family refers to it, is an underlying theme here, and, like Williams’ brilliant script, holds many layers.

Central to this story — to all the lies in its layers — are Brick (Matt Leonard), the younger Pollitt son, and his wife, Maggie (Ellen Kirk). Brick immerses himself in such Olympic drinking throughout the show, it’s a wonder any booze remains in the bottle by the end of Act 3. (Yes, it’s a three-act play with two intermissions, but the production let me pay no heed to the time.)

As the story and characters evolve, so do the actors’ portrayals. Kirk, who dazzled in MET’s The Skin of Our Teeth earlier this year, nearly dominates Act 1 in a virtual monologue as she tries to elicit some sort of interest, even an utterance, from her withdrawn husband. Whether loving wife or security seeker, Kirk’s Maggie intrigues us, emitting need and longing but also cattiness. Her motives remain ultimately ambiguous.

Big Daddy’s attempt to newly embrace life stands in contrast to his son Brick, who’s trying to throw his away. Leonard’s is an agile performance, both physically and emotionally. Brick leans as heavily on drink as he does his crutch (which he uses throughout the play), having had a drunken 2 a.m. run at hurdles on the school track. This aging football star is on the disabled list, in more ways than one.

Cordes is first-rate, finding vulnerability in a man who’s large in personality, wealth and girth. His bout with Brick in Act 2 unleashes the heart of the story, father reaching out to son in frustrated, often anguished pursuit. Theirs is a gut-wrenching scene. And Williams’ keen ear for human engagement shows just how words can evade or penetrate, skirt or hurt.

While Big Daddy plans a future, his eldest son, Gooper (Chris Roady), and Gooper’s pregnant wife, Mae (Nicole Green), scheme and maneuver to inherit the vast estate, using their five children — “no-neck monsters,” Maggie calls them — to sway Big Daddy’s affections. (The kids portraying the five Pollitt offspring must be some of the cutest child actors working in KC.) 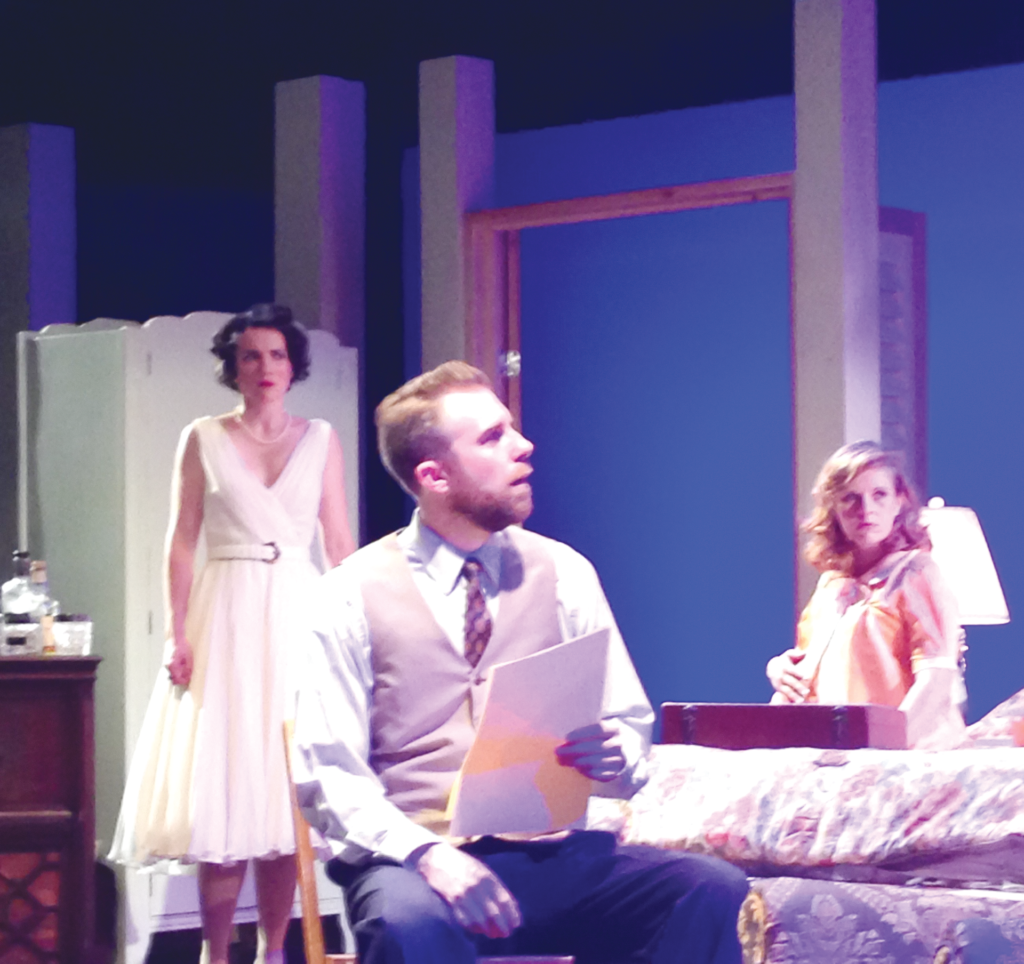 Green, a strong actress, stands out as well, not just for her character’s very pregnant status but for her mix of charm and dutifulness with crass manipulations. Roady is solid as the overlooked son who competes against a golden sibling, in Shakespearean fashion, for his inheritance. And as Big Mama, Main brings both bravado and sympathy to a matriarch concerned for the well-being of a favored child and for a husband who can hurl abuse.

It was an appropriately stormy night when I attended, and I couldn’t always differentiate the wind and thunder outside from that onstage (sound design by John Story). Summer partywear, including Brick’s silk pajamas, Maggie’s and Big Mama’s dresses, and Mae’s maternity clothes, drew my eye (costumes by Atif Rome). The beautiful Southern set (of Maggie and Brick’s room), with its plantation shutters, open verandas, and backdrop of sky, made for effective staging (design by Paisley).

MET’s production of this timeless play emerges as one of the most rewarding nights of theater I’ve experienced this year, just the kind I wish for every time I attend.

Cat on a Hot Tin Roof