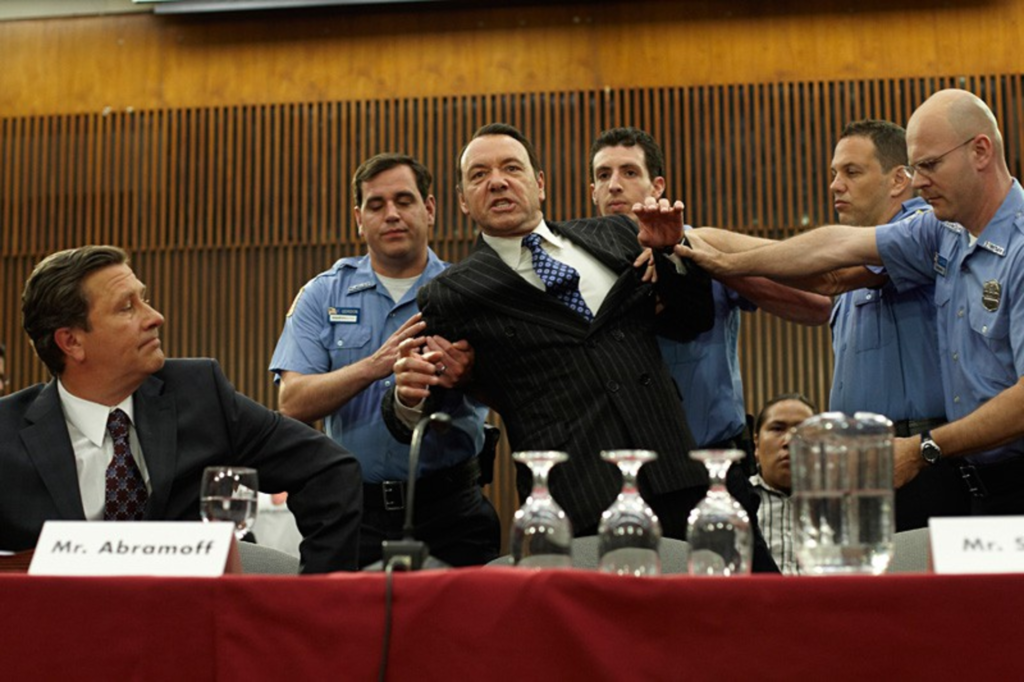 The late George Hickenlooper’s Casino Jack is an improbably blithe cautionary tale, recounting the rise and fall of Washington, D.C., superlobbyist Jack Abramoff. “You’re either a big-leaguer or you’re a slave clawing your way onto the C train,” the avid antihero (Kevin Spacey) tells his mirrored reflection in the pre-credit sequence; most everything that follows in this flat, obvious movie is filtered through Abramoff’s consciousness and is dominated by Spacey’s patented brand of smooth insincerity.

Screenwriter Norman Snider downplays Abramoff’s career as a political operative in favor of the fun of his wheeler-dealerism and personal eccentricities. The presence of Tom DeLay and Karl Rove look-alikes notwithstanding, the notion of a permanent lobbocracy is underdeveloped. Abramoff is a weirdly self-righteous hustler, devoted to faith and family, shaking down Native Americans and a Greek gangster to finance his plans for a Jewish school and K Street kosher deli.

In the grand finale, Abramoff fantasizes about using a Senate hearing to blow the whistle on the entire corrupt establishment. His rant offers a clue to how this otherwise pointlessly manic movie might have honed its political edge.

Although Abramoff is no longer in jail in real life, the movie ends with the perp behind bars. He exits on a cloud of hot air, threatening to expose the Republicans on his release. Really? John Boehner and Eric Cantor (for whom the lobbyist named his deli’s roast-beef-on-challah sandwich) must be quaking in their boots.