What does 2018 have in store for local food and drink? Chefs Carlos Falcon, Vaughn Good, Theresia Ota and others weigh in 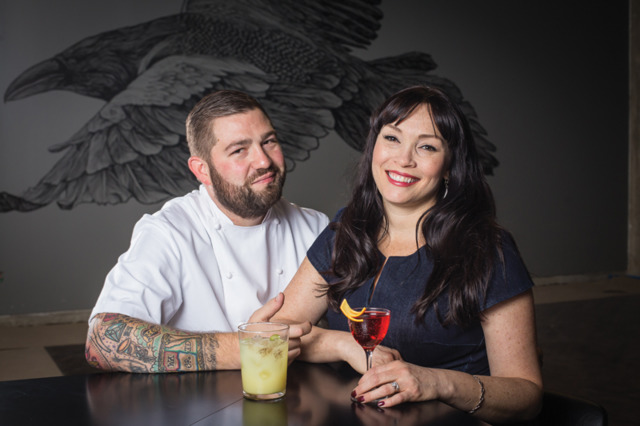 So 2017 was nobody’s idea of a good time politically. But at least the food was good. In fact, there seems to be an inverse relationship between whatever’s going on in Washington (and in Jefferson City, and in Topeka) and what goes on among KC’s chefs and mixologists. The past year gave us Lawrence Beer Company, Messenger Coffee downtown, Swordfish Tom’s, the new Rye, Corvino Supper Club and Tasting Room, the Mockingbird Lounge, the Monarch, Sully and Hank’s, Urban Café and Freshwater (here, then gone, but soon to come back again). All feel essential now.

The good news keeps coming. Set to open in the new year: the resurrected Golden Ox, Jonathan Justus’ Black Dirt, the Myers Hotel, and the soon-to-come Crossroads location of Novel.

I asked some of KC and Lawrence’s brightest culinary minds what they loved about 2017, and what they’re hungry for in 2018.

The year really flew! I’m grateful for the continued excellence of restaurants like the Rieger and Novel, and new kid on the block the Antler Room — congrats and love to all for their continued success and maintaining a level of actual cuisine in KC! I’m also excited that Sam Hefter and Clark Grant are back on the Plaza. I can’t wait to see what else they do, and to eat more of their food.

I absolutely loved Ça Va’s Sunday dinner series over the summer. Anakaren Ibarra of Happy Gillis did a phenomenal dinner there on July 9. She did a regional Mexican braised pork in a yeast dough, steamed in a corn husk that was basically the equivalent of Mexican bao buns — maybe the best and most memorable thing I ate in KC in 2017.

There was also the bittersweet farewell to Julian (how I celebrated the Fourth of July). Then of course the Monarch Bar opened.

Hands down the highlight of my year was participating in the Les Dames & Jazz event that chef Debbie Gold and the American Restaurant hosted. What an honor to be included, and to have the time of my life cooking alongside some of the best lady chefs in KC: Katee McLean, Remy Ayesh, Celina Tio, Renee Kelly, Debbie Gold, Allison Reed, with special guest appearances from Abbey-Jo Eans and Anakaren Ibarra.

I am really looking forward to seeing how the political and social climates affect the restaurant industry in KC. From a livable minimum wage, to realistic hours for salaried employees, to not tolerating sexism or sexual harassment or sexual assault in the workplace — really every workplace, not just within the restaurant industry. It feels like we are on the brink of real change for the better, and I look forward to being an ally or a catalyst for that change.

I have really enjoyed Brewery Emperial. I really like the vibe of the place — it’s somewhere I want to hang out. They have good beer and a solid menu. The food is interesting, and I love that it comes from a wood-burning hearth, which adds character to the food and makes the space smell awesome and inviting.

I’m looking forward to the Myers Hotel Bar reopening in Tonganoxie. It only just closed last summer, but Kate Frick was able to purchase it and will be restoring the old hotel. She hopes to turn it into a music venue, coffee shop and bar. It was a great bar, and the building has so much potential. I am very excited to see what Kate will do.

To be honest, since we opened in April we don’t go out too much! When we do, we stick to our favorites — the Rieger, Ça Va, Novel, Bluestem.

We definitely see a growth in local family-owned farms — what they’re offering and the standards they set with how they grow or raise their products. New farms that Michael is working with include Stirring Soil and Woodland City. Working with the farmers to plan out what they will grow, based on what the chefs want to cook with, is a really satisfying partnership to have. Additionally, our local heritage pigs were formerly being shipped to the best restaurants in New York. Now, through a partnership between Arrowhead Meats, Paradise Locker and specialized pork farmers, this incredible meat is available in KC.

Personally we’re looking forward to incredible growth in the Crossroads with the completion of multiple hotel and condo and apartment buildings, along with the addition of more restaurants. Novel will be moving in closer to us, and there are other cool restaurants on the horizon. Kansas City needs this area of concentrated living spaces, businesses and chef-owned restaurants. A rising tide lifts all boats.

It was shocking for me to learn that the American was closing — such a great institution. Obviously the opening of Corvino soothed that feeling. He’s a great chef, and it’s a great restaurant. The Antler Room — I’m a big, big fan. With the Rieger, we are seeing recognition on a national level. It’s good for all of us. Colby and Megan [Garrelts, of Bluestem and Rye] continuing their great tradition by expanding their new [Rye] location. I’m nothing but thankful for the year that we had. I’m so grateful to know all of these wonderful people that work in this industry.

In 2018, I really want to complete this whole dream of mine of opening another location, completely unrelated to seafood. I want to continue the Mexican tradition and do more elevated Mexican cuisine. Hopefully we can move into the Crossroads to make this dream happen.

The Antler Room was my favorite restaurant of 2017 because the food is so good, the service is always friendly and it’s like they have their own little world tucked away on Hospital Hill. I also love Corvino Supper Club & Tasting Room — Michael does an amazing job with Asian flavors. It’s always super fresh, bright and delicious. Columbus Park Ramen Shop and Shio are both doing great ramen, and I really want to see the city embrace it more. I really enjoyed going to either one during the summer nights in KC.

When I had out-of-town guest chefs, they were so impressed with our city when I took them out for drinks and snacks at places like Manifesto, SoT, Julep and Ça Va. With drinks on my mind, I have to say I had some of the best cocktails I’ve ever had at Swordfish Tom’s. It’s incredible and such a chill place to hang out. I’m thankful we have Broadway Butcher Shop. Stuart does a great job over there. Those hanger burgers are insane.

In 2018, I look forward to taking more small road trips to Springfield, Columbia, Lawrence, Weston and Omaha. Going a little out of the way makes it feel like you’re on vacation, and there’s some great food and drink out there.