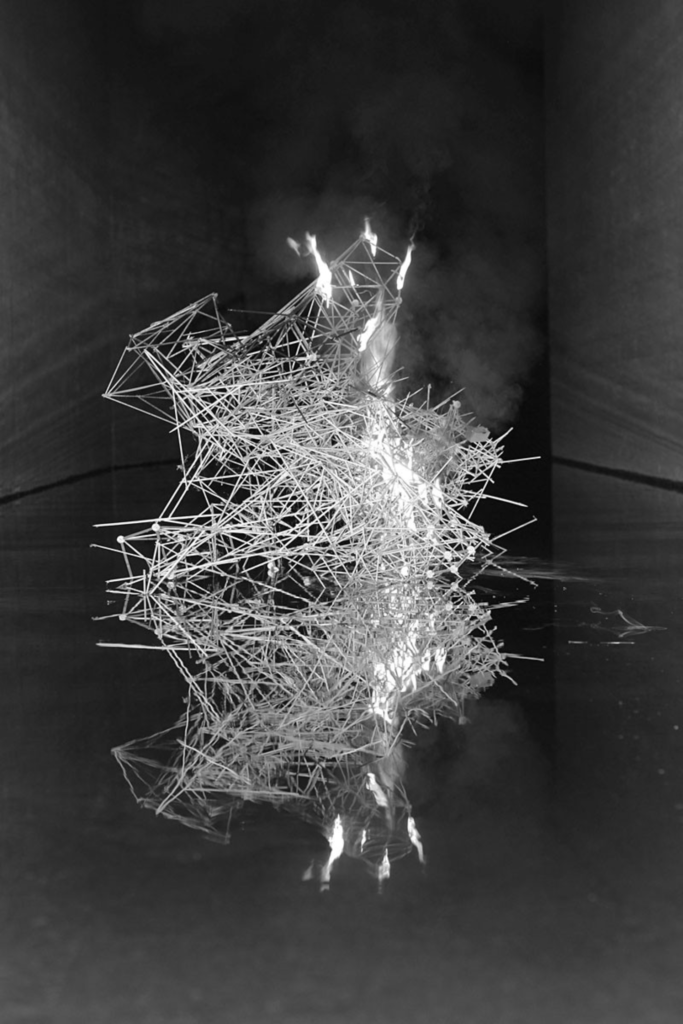 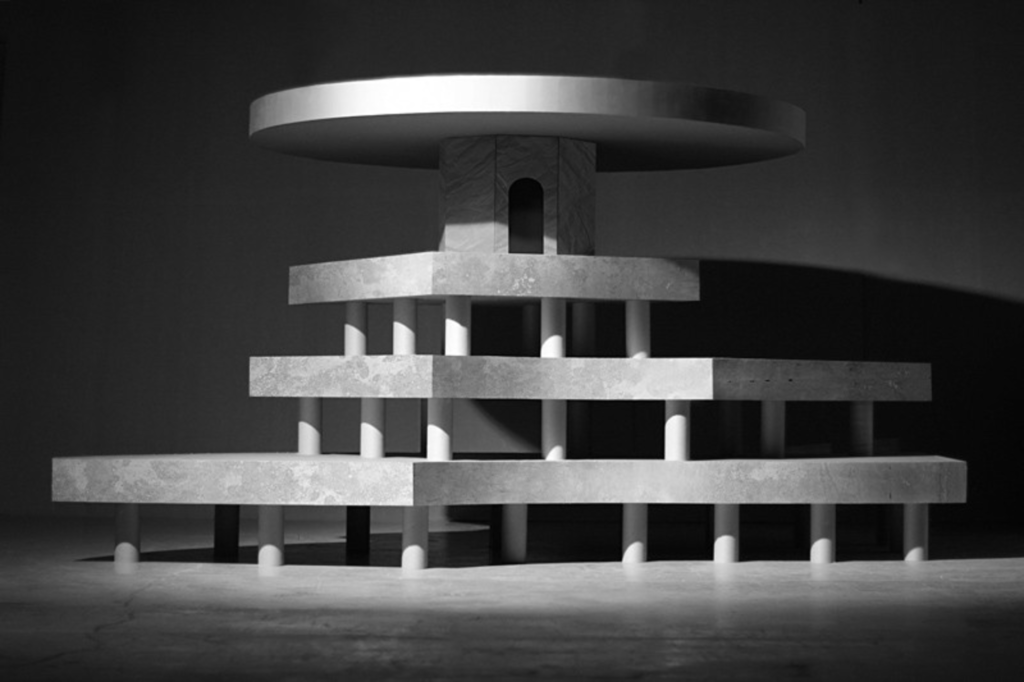 The day after artist Anthony Baab’s A Strenuous Nonbeing opened, more than 50 people showed up at Grand Arts to hear him talk about his latest exhibition. Stacy Switzer, the space’s artistic director, said it was the largest crowd she’d seen there for such an event.

The weather helped. January 19 was an unseasonably warm day, almost as hospitable as the previous night, when the show opened. And Baab has earned a following with his arresting, intricate images. But there was also the matter of the cats — about which, more in a minute.

Baab has described his earlier work as “very controlled,” and the deep sense of detail in much of A Strenuous Nonbeing is in line with that self-assessment. These latest works are the result of nearly three years spent building, rebuilding, documenting and altering, and they add up to a soaring statement about in-between states, touching on ideas of scale, time, history and language.

Those who are familiar with Baab’s previous work will recognize his signature tape-drawing method on the first piece hanging inside the gallery door, titled “clod paerati.” The subject of the photograph is a symmetrical structure, centered in front of a garage door inside what, for a time, was Baab’s studio. Credit for the photo goes to KC’s go-to shooter for artists, E.G. Schempf. Baab’s tape drawings have often been made on others’ photos (with many on found images), so “clod” both retraces a habit and hints at Baab’s creative progress.

The structure in “clod” — a cardboard thing, a model of a building never meant to be built — has no practical use, Baab told his January 19 audience. But a version of the 13-foot-high assemblage functioned very well as a place for cats to perch, play and scuffle. In the video that shares a title with this exhibition, those cats’ antics were live-streamed during the opening, and the three-hour loop is being projected in nearly life scale for the remainder of the show.

On the photo, innumerable strips of narrow white tape give Baab’s towering geometrical “building” an armature, a faux scaffolding that recalls the iron latticework of the Eiffel Tower and seems to hold it up. In the video, which plays in Grand Arts’ dark, small side gallery, the cats act as our proxy, experiencing firsthand a model we’re unable to access.

And on the evidence, it’s a good time. It’s hard to know how many cats are taking part, and keeping track of them is a challenge as they jump around, entering and exiting the frame, and picking at invisible treats. Much of the time, they just lurk, as all cats do, indifferent to our presence.

Baab said he used the cats because they are beautiful and unpredictable. (More unpredictable still, perhaps, given that these cats aren’t Baab’s. Our metro, it turns out, has its own professional cat wrangler, who spent a couple of days talking with the artist about how to procure just the right animals.) They don’t act how you expect them to, he added, but they always do a good job. Here, they add a bit of levity to what is a fairly concept-heavy and visually stark exhibition.

All nine of the framed photographs at Grand Arts are impressively large (as tall or wide as 75 inches). Two of them are not single prints under glass but rather layers and layers of prints of other structures, surviving as only the two-dimensional outlines of themselves. The skeletal and topographical results reveal Baab’s meticulous process of cutting away (décollage), as though he’s X-raying his own creation. Each is marvelous, a telescopic collapse of time.

The titles of the framed works are derived from captchas, the online security measures that require a user to prove her own existence by retyping a randomly generated phrase. Baab’s aren’t from routine sites, though, such as the comments section of a blog or the ordering page of a retailer. Instead, he has taken the linguistic fragments directly from captcha.net. For him, each short phrase is a beautiful snapshot, a two-word thought that exists for a moment and then disappears.

They also tend to suggest real words, leading you to a kind of found poetry. “There is a certain amount of anonymity to them,” Baab said during his talk. That anonymity functions to obscure meaning — the works’ titles, he said, shouldn’t color our interpretations. We end up doing that here anyway, though, because even a seemingly random set of characters is more evocative than something called simply “untitled.”

For example, the two “straight” photographs (one-shots that were not digitally altered), depicting spindly nests of bamboo sticks, seem aptly named, even if we are told the titles are nonsense. “Cave nuthywo” was shot in a cavelike place, and “patristic isizons,” which shows its structure on fire, hints at a similar connection between the crackling sound of burning wood and the onomatopoeic isizons.

The other prints are of models that look like strange houses, with projections and interjections fashioned after turbines, wheels and fins, or like parking garages or 1960s office buildings. As presented here, it’s impossible to tell their true sizes. (Baab’s use of pillars, to separate the models’ layers or hold them off the ground, recalls Le Corbusier.) After Baab built and photographed these structures, he added layers from other photographs he had taken, emphasizing the tactile — the dull sheen of a car door, say, or concrete. This Photoshop gluing of textures onto planes makes an entirely new picture and gives the models an otherworldly feeling. We could be looking at the isolated buildings that make up some stark outpost.

In fact, we are looking mostly at found cardboard. Baab said it’s an affordable medium, one that allows him, with limited expense, to see what happens when you let something go.

Besides providing a camouflage for his choice of material, the black-and-white translucence of the photography allows Baab to compress information. In one shot, he shows us the construction process, the physical piece itself, and the image of the thing. Here, we also move past all that and on to what happens after a thing has been conceived and built and photographed — for example, when it’s crawling with cats or burning down in a culvert.

Baab was inspired to start building after he picked up an old Cooper Union architecture textbook, illustrated with black-and-white images of works by first-year students whose creations were made of standard-issue blocks. He saw in them, he said, “a strange potential to become.”

He also recalled for his January 19 audience a class he had taught at the Kansas City Art Institute. He said the subject had to do with “the gap,” the thing that exists between ideas and objects, the notion that things in the world possess the ability to act. A Strenuous Nonbeing explores that gap.

But none of that conceptual loftiness is required to appreciate what’s at Grand Arts. Mainly there is the pleasure of figuring out the forms, discovering the textures — and waiting for the cats to do something. (Don’t worry, they will.) It works, and that’s all you need know. But you won’t know it if you don’t go see it.