In an increasingly crowded fine-dining scene, does Farina live up to chef Michael Smith’s reputation? 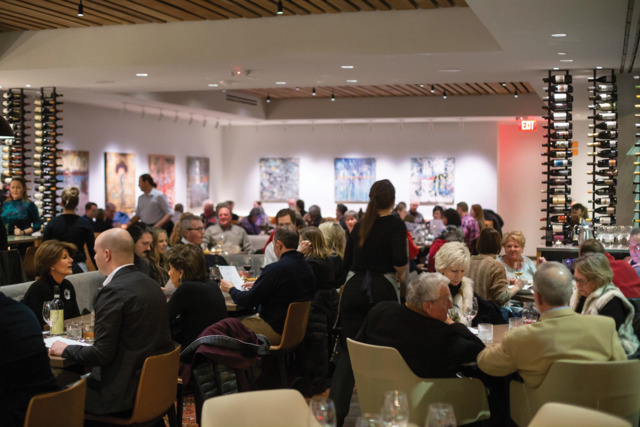 If Michael Smith builds it, Kansas Citians will come. Case in point: Farina, the chef’s new upmarket Italian restaurant, which has been crowded with eager diners since it opened in February.

Smith’s star-power pull makes sense; he’s been a fixture in the local dining scene for decades. During his tenure at The American in 1999, Smith and co-executive chef Debbie Gold earned the James Beard Award for Best Chef Midwest (no small feat, and a centerpiece of Farina’s marketing).

But these days, most Kansas Citians know the chef and his wife and business partner, Nancy Smith, from their two Crossroads ventures — the now-closed Michael Smith Restaurant and the still-swinging Extra Virgin.

The Smiths planted their latest, Farina, in a nearby Baltimore Avenue building that previously housed the Kemper at the Crossroads gallery. The restaurant’s menu, which is billed as “modern Italian,” leans heavily on fresh pasta, veal, and crudo.

But “modern” seems an ill-fitting descriptor for many of Farina’s dishes, which skew toward familiar classics and simple, unchallenging flavors.

This isn’t a criticism per se. A selection of classic pastas — labeled here the “Four Kings of Rome” — are worthy menu mainstays. The tagliatelle Bolognese I sampled was rich and comforting, with thick, chewy ribbons of pasta and a blizzard of Grana Padano.

The bucatini carbonara checked off the usual boxes. The pancetta-spiked pasta was savory enough for a Clydesdale’s salt lick, silky enough to line a Farina diner’s designer handbag. The crowning touch: a whole egg yolk cooked to a gooey, pudding-y texture. But the bucatini was slightly overcooked and oversoft, making the already unctuous dish salesman-slick.

Texture was an issue with a couple of pastas I tried on the “pasta atipica” menu, which rotates seasonally and features somewhat bolder flavors. The whole wheat campanelle was a hair too soft, muting an otherwise exceptional dish (the pheasant sugo was generously seasoned, with a salty-earthy punch from aged goat cheese). 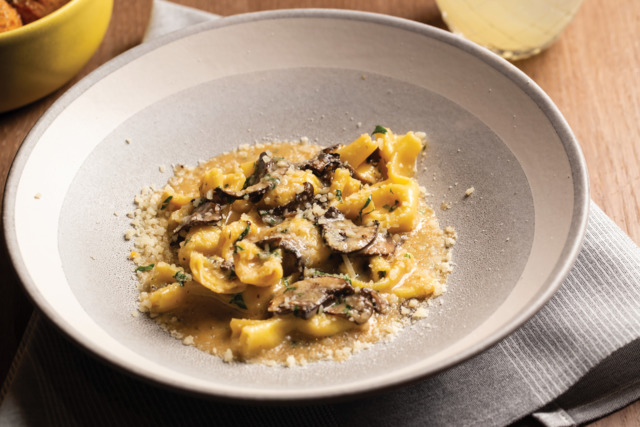 Perhaps by virtue of its thicker, wrapped-Werther’s-Original shape, the caramelle was among the chewiest and most satisfying of the pastas I tried. Each noodle held a purse of gooey crescenza cheese, mild enough to counterbalance the salty mushroom marsala. The potato gnocchi was another textural success — each little dumpling was as plush and supple as a feather pillow. The rabbit, leek, and mushroom-flecked sauce was too salty for me, but my tablemate scraped the plate clean.

That’s easy to do at Farina. The pastas ($14–16) are small, appetizer-sized portions, in keeping with the Italian tradition of primi and secondi piatti — literally, first or second plates. A standard meal begins with a few bites of pasta and progresses to a larger entrée showcasing a single protein.

But if you’re craving a more Italian-American-sized bowl of carbs and cheese, you can order an entrée plate of pasta for twice the listed price (ask your server; on my first visit, they didn’t offer this option).

The entrées listed as “secondi” are priced for fine dining, with most options in the $30–$40 range. They’re also a little more conservative: an aged ribeye with mashed potatoes, a Campo Lindo chicken cacciatore. On my visits, three of the nine offerings were veal-based. The wood-fire-grilled veal chop pizzaiola ($42) was a primal showpiece, but the bone-in chop was cooked beyond the medium-rare I ordered and difficult to saw. The veal scallopini ($32), was a better value, with tender cutlets and a bright caper-lemon-herb sauce. The best of the veal triad were the braised veal cheeks ($30), which were so luscious and tender I felt indecorous eating them. 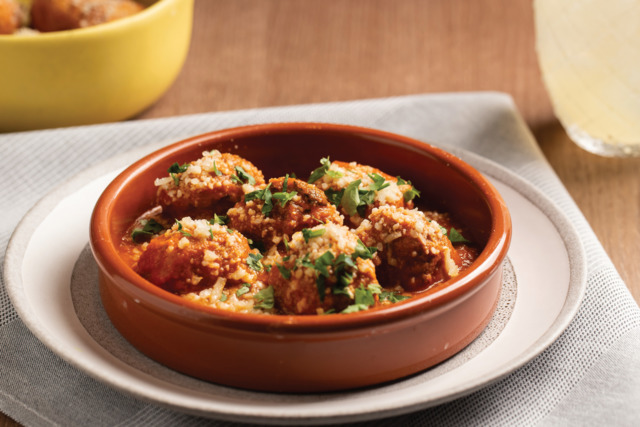 That might have something to do with the open dining room, which offers prime people-watching. Farina is a different animal than Michael Smith, with its more intimate ambience and date-night lighting. The vibe here is lighter and brighter and a little more youthful, with textured gray couches and camel-colored leather banquettes. The Kemper gallery’s enormous west-facing windows have stayed to maximize natural light (and maximize squinting as the sun sets through gaps in the shades). It’s a pleasant, unfussy space that could moonlight as a Crate & Barrel showroom.

The best seat in the house is at the raw bar, where you can order oysters, octopus, and caviar while peering out north-facing windows to the street. For an economical option, try the clam dip, served cold and creamy with a fresh pop of salmon roe. You could spend a fine happy hour here nibbling the jagged continents of crackers and sipping a draft from the well-curated (and surprisingly inexpensive) beer list. For wine drinkers, there’s a veritable card catalog of bottles selected by Nancy Smith and priced for nearly every budget, from “is there a split plate charge?” to “my compliments to the sturgeon who birthed my meal.”

Cocktail drinkers are in good hands with beverage director Alberto Santoro, whose attention to the ice alone augurs a careful program. The perfectly clear, jewel-cut cube in my negroni made it look like a $14 drink — which is good, because it was.

The amaro-centered L’Averna & Shirley tasted blunt and boozy, and I was put off by a hulking raft of citrus peel that slapped me on the cheekbones whenever I took a drink. (One of many low hills I will die on: garnishes should not make a drink less pleasant to, well, drink.) But The Two Yoots, which combined gin and fennel liqueur, was balanced and sunny, with a bright (but not tart) citrus profile and a subtle fragrance from the rosemary. 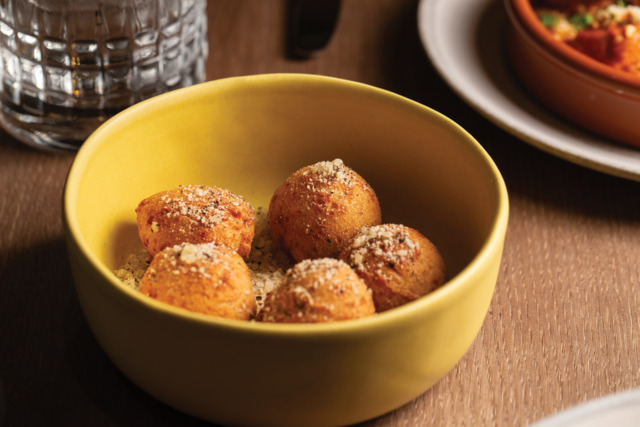 The cocktails and appetizers come closest to evoking the restaurant’s “modern” ethos. I wanted to love the cacio e pepe fritelle — fried domes of cheese-stuffed pastry popularized at Missy Robbins’ beloved restaurant Lilia in New York. Smith’s versions were fried to an attractive amber brown and had a pleasant crunch, but the filling was blander than its namesake pasta would suggest. I preferred the duck meatballs, which were soft, lush and swaddled in a tomato-prosciutto gravy. But my dark-horse favorite was the clam toast, a humble-sounding dish that seems lab-engineered to perfection — tender clams, pungent dried tomato and parmesan, toast thick enough to crunch but thin enough to keep the spotlight on its toppings.

Hospitality has historically been one of the Smiths’ strengths. True to form, I spotted Michael Smith circulating among the tables on all three of my visits, greeting patrons with a winsome smile (he never stopped by my table, but I look like someone with student loans.) 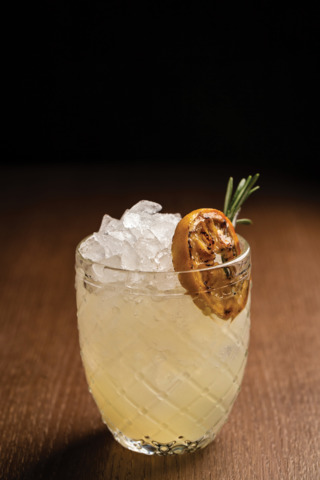 I was surprised to find service at Farina so uneven. On my first visit, I had a bored-looking server who offered little insight into the menu. On my second, the server was so transparent about upselling that she came off as pushy. Crucially, neither she nor the food runner who delivered our dessert, a mixed plate of different Italian cookies, bothered to tell us what cookies were on the plate (the unhelpful notes I took on my phone: “molasses boi. Alison Roman-esque choc. chunk shortbread. fig horn??”)

On my third visit, I had an easygoing server named Sean who made the experience much more pleasant. Clone Sean, is my advice.

The desserts, courtesy of pastry chef Ali Woody, don’t feel as sure-footed as the rest of Farina’s menu. Those Italian cookies were interesting, but the accompanying dish of chocolate and strawberry soft-serve was unremarkable. I adored a satiny panna cotta with a huckleberry compote, but the dessert had vanished from the menu by my last visit. In its place was a flatly sweet riff on a strawberry shortcake. I bear some culpability for ordering this dish in early April, but the strawberries were pale and prepubescent.

Farina has some excellent, memorable dishes that attest to the wisdom of its crowds. You’re unlikely to have a bad meal here. But as Kansas City’s restaurant scene balloons, I’m forced to consider a fussier metric: whether I’ll return to a place once the review is filed and I have to pick up my own tab.

I’m not sure I’ll be back to visit for a while. Right now, other fine-dining haunts are setting a higher bar for hospitality, ingenuity, and value.

Sip on “The Two Yoots” and order the caramelle for your first course. The main event’s the braised veal cheeks.