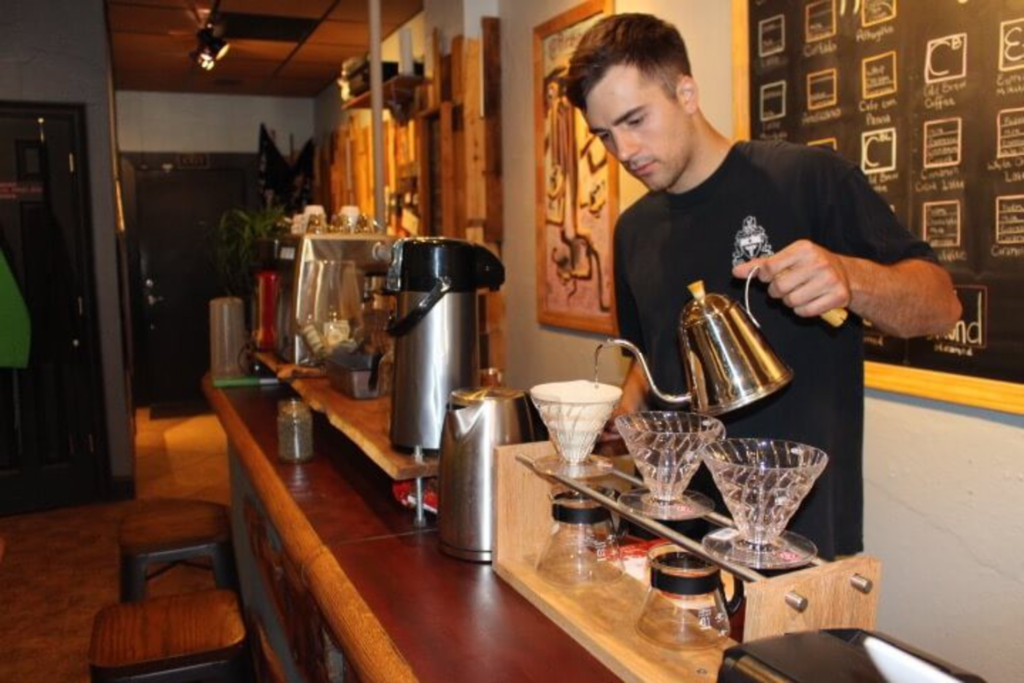 Chase Scroggins has been putting out a few fires lately.

Not long after the 25-year-old coffee roaster launched the website for his fledgling business, Cafe Noble — which sounds like a coffeehouse but isn’t — he began getting comments from coffee lovers who discovered the site. A typical response: “That photo of you was taken at Pirate’s Bone Coffee. Are you taking over that coffee shop?”

“Suddenly people had me opening a coffeehouse,” Scroggins tells me. “That’s in my plans — far down the road.”

Scroggins, a Cincinnati native, moved to Kansas City to work as a consultant for Cerner. After two years with that company, though, Scroggins quit. “It wasn’t what I wanted to do with my life,” he says. What appealed to his entrepreneurial spirit was coffee.

And what appeals to his businessman’s sense of thrift is a collaboration with Pirate’s Bone Coffee, the shop that opened last year at 645 East 59th Street. It’s here where he has arranged for a mechanic to install a ventilation system to allow operation of his Korean-made Gene Cafe roaster. By running his Gene inside Pirate’s Bone, Scroggins says, “I minimize my startup costs, get a place to roast my coffee, and learn the business. And [Pirate’s Bone owner] Zaid Consuegra will be my first customer.”

The agreement that Consuegra and Scroggins have worked out does not obligate Pirate’s Bone to use only Noble’s coffee, Scroggins says, “but he will be selling bags of my coffee there. And, hopefully, brewing and serving it, too.”

Scroggins calls his business model a nano roasterie where he’ll be roasting only small batches of coffee beans — about 2 pounds — per batch.

He adds: “It will be a nano-roasting operation, kind of like a microbrewery.” Nano is, for now, the key word; he’s roasting just a couple of pounds of coffee beans per batch while he waits to pass health inspection.

“I’m a one-man operation here,” he says. “So until I’m open for business, I’m passing out samples and handing out my business cards.” He expects to be fully operational — and introducing his product to local stores and restaurants — in August.

And although coffee is a noble brew, the University of Alabama graduate has given his enterprise a patrician name for a more personal reason. “My grandfather’s first name is Noble,” Scroggins says. “It’s my shout-out to him.”