Café Europa opens the doors in Union Hill, Janet Ross leaves Ragazza, and Westport Café and Bar launches a new menu and a steak night, plus the week’s restaurant events 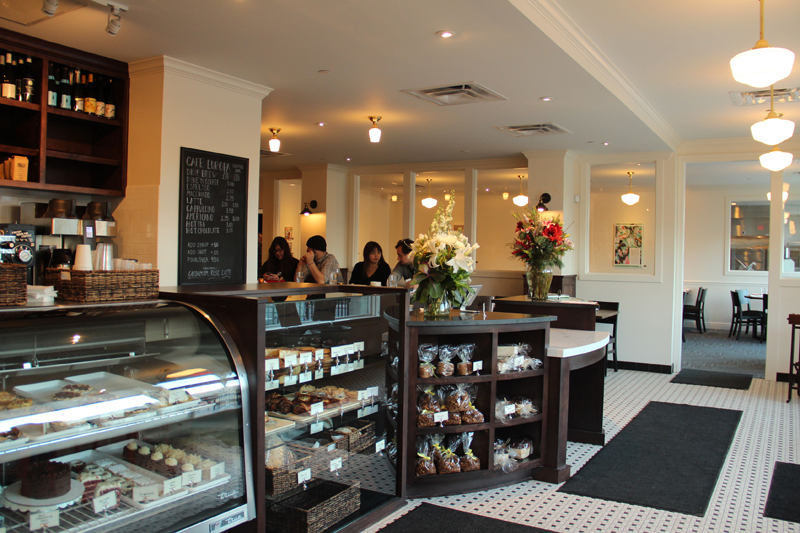 For 15 years, Café Europa has been a Crestwood institution at 325 East 55th Street. But this most neighborhood-y of neighborhood restaurants has opened a second location: Owners Dan Weber and Nate Feldmiller are Union Hill’s latest tenants, at 2976 Gillham Road, on the ground floor of the new McGee Building. Weber and Feldmiller — the longtime GM and chef, respectively, at Café Europa — recently purchased the Crestwood location in addition to embarking on this second chapter.

The new room is bright, with floor-to-ceiling windows facing onto Gillham Road and allowing maximum sunlight for something the Crestwood original doesn’t have: breakfast customers. Walk in and you have a straight line to the coffee bar and cases full of baked goods and ready-to-eat items; turn right and you can have a seat at the bar or in the dining room, which is separated from the bar area by glass windows.

“We didn’t want it to be the same thing,” explains Weber of the new location. “We thought about all of the things we wish we could do over there but, for lack of space, we weren’t able to. We always wanted to do this concept, with an all-day menu, which we feel suits the neighborhood with the all-of-the-time kind of feel.”

Café Europa is serving breakfast daily from 7 a.m. to 10 a.m. The morning menu is a work in progress but for now features porridge; chilaquiles; an egg sandwich with latkes; and a breakfast plate with eggs, bacon, toast and latkes. Weber says he expects that menu to expand, particularly for weekend service, as the staff settles in. He also says the to-go counter, which now centers on sandwiches and salads, eventually will include deli meats, including house-made pastrami.

The regular menu offers a few of the Crestwood staples, including the scallop risotto, but also offer fresh pasta, house-smoked salmon, charcuterie, cheese, and steak tartare. The Union Hill daily specials have so far included mussels and fries on Wednesdays, duck confit mole on Thursdays, and pork schnitzel on Saturdays. The cocktail menu was created by Lazer Avery, formerly of Bluestem; he’s the husband of Susan Avery, bar master at Café Europa Crestwood.

I reported last month that chef Janet Ross was joining Ragazza (301 Westport Road). It was a brief relationship; Ross has already left the neighborhood Italian spot.

“Not much to say, really,” Ragazza owner Laura Norris told me last week. “She didn’t think it was the right fit for her. I understand but am disappointed.” A call to Ross was not returned as of press time.

In any case, Tuesday steak nights — a 6-ounce tenderloin or a 10-ounce strip, with polenta, sautéed string beans and a salad — are still a thing, and still $17. The special is available from 4 p.m. to 9 p.m. that day.

Speaking of midtown steak specials, Westport Café and Bar (419 Westport Road) has launched new winter and drink menus as well as a Tuesday-night “steak soiree” (thus igniting the Westport steak wars). The soiree offers the restaurant’s long-running steak frites entrée — a center-cut sirloin with béarnaise or house butter, with pommes frites; the special means “bottomless” frites and a price tag of $15 rather than the regular $23. That deal is from 4 p.m. to 1 a.m.

Save the work for tomorrow and enjoy a three-course prix-fixe dinner tonight at Rockhill Grille (2000 Grand). Choose from a Brussels-sprouts salad, a kale salad or baked potato soup for your first course; herb-roasted prime rib with marble potatoes, duck confit with hash browns and lardons, or stuffed trout with blue crab for your entrée; and, finally, a banana-cream pie or a chocolate flourless torte for dessert. The dinner is $45 a person, with wine pairings available for an additional $25. The restaurant is taking seatings from 4 to 8 p.m. Call 816-389-5800 for reservations.

My older sister is a dyed-in-the-wool New Yorker, and there are few better ways to spend the holiday than to indulge in “Jewish Christmas” — aka, going out for Chinese food and going to the movies. For a KC version of Jewish Christmas, my favorite old-school Chinese restaurant is Princess Garden (8906 Wornall Road). It’s open during regular hours, 11 a.m. to 8: 30 p.m., for both dine-in and carryout. The menu mixes authentic Chinese fare with the highly Americanized items much beloved around here, and the retro tiki-cocktail menu alone makes it worth a visit.

If you and yours require a robustly American menu, step away from the Christmas buffet and go all out at Stock Hill (4800 Main), Bread and Butter Concepts’ newest, most ambitious — and priciest — location. The full menu is available all day, with seatings available until 9 p.m. and the bar open until midnight.

Remember, if you’re out on Christmas, so are the people serving you. Tip like drunk Santa.