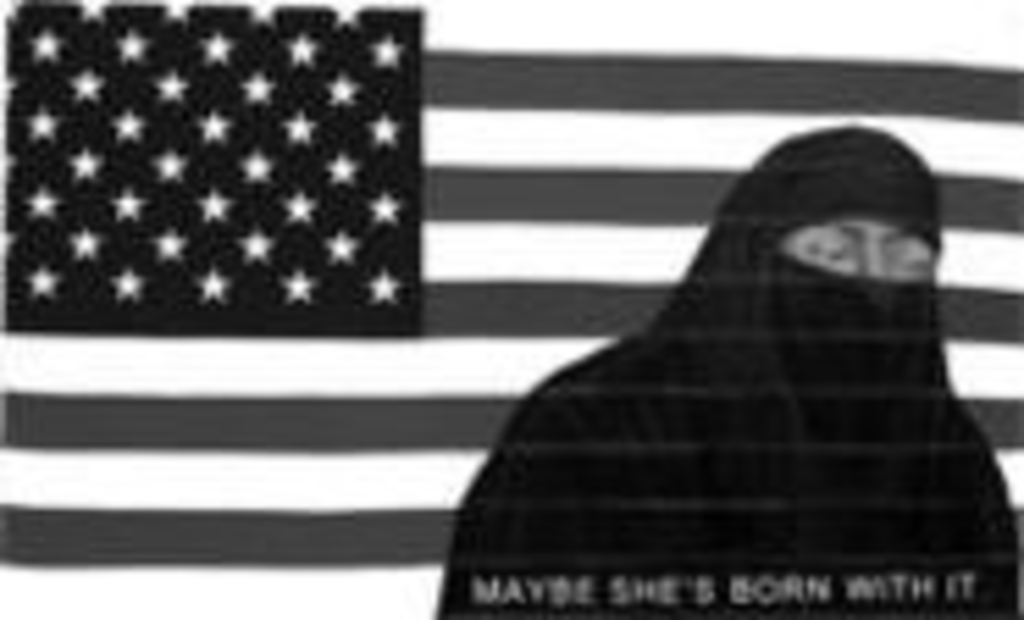 Artist Jay Norton doesn’t do subtle — at least not these days. He has been known to take breaks from painting pieces such as “Maybe She’s Born With It” (an American flag with a portrait of a burqa-clad woman and the Maybelline slogan), but politics creep back in. Especially now.

“I’m not exactly happy with what I see going on in our country,” Norton says. “Somebody’s got to say something.” Which brings us back to the flags. Norton has stretched a few as if they were canvases and used oil paints on them for Raze, which opens Friday at MoMO. One shows the silhouette of a starving child crouched next to a fast-food meal. And another flag — well, Norton has set it on fire.

Missouri has a law on the books about flag desecration, and Norton is a little worried. “The United States Supreme Court said that flag desecration was political speech protected by the First Amendment a few years ago and you can’t criminalize it,” he says. “But that hasn’t stopped communities from arresting people.” There’s also the small matter of Norton’s day job — as a lawyer. “I’m sworn to uphold the law. As an attorney, that’s my ethical duty,” he says.

But Norton believes that the flag has lost some of its meaning. “I see American flags on bumpers, on fucking Old Navy T-shirts, just so people can prove that they’re a patriot, so I feel it’s been abused and desecrated already in ways that people don’t even blink at.” And don’t get Norton started on those omnipresent ribbon magnets. “Total bullshit,” he says. “I wish I had the time to go around and ask these people what exactly they’ve done to support the troops.”

As for the opening’s proximity to Independence Day, that’s on purpose. It’s not only Norton’s favorite holiday (“I like seeing stuff get blown up,” he says) but also the weekend for celebrating America and the flag. As he says, though, “This is just one more perspective on it.”