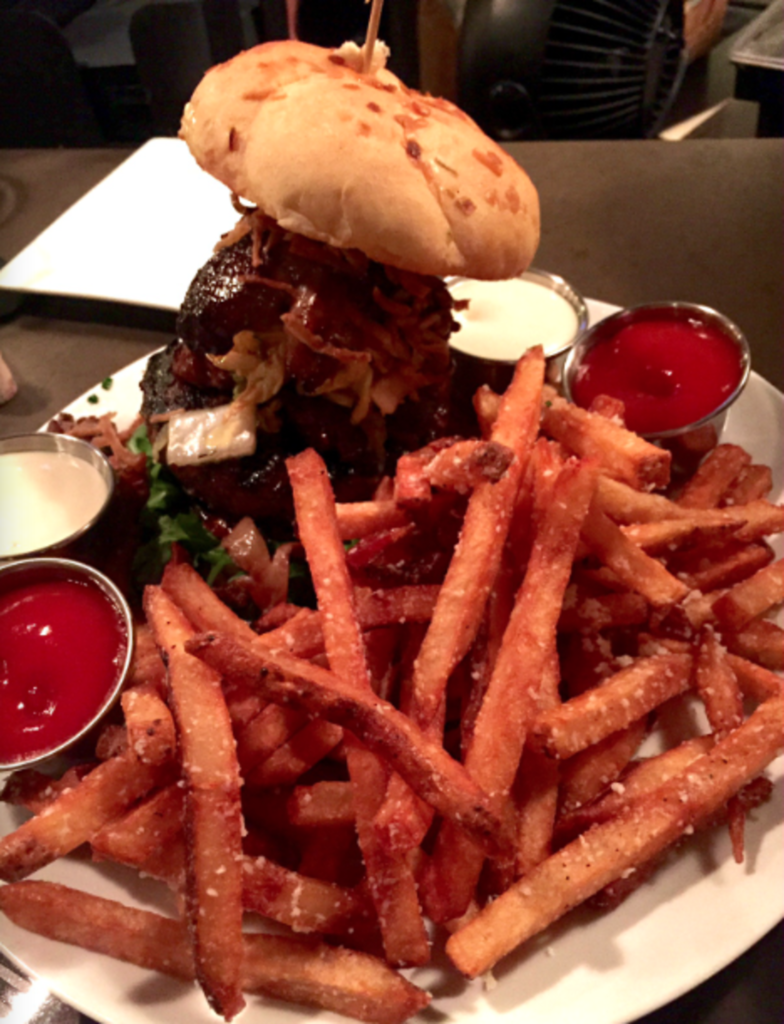 Let me say that again: There’s a burger at Tannin that costs $30.

It’s described as including crispy braised pork cheeks, kimchee, oyster mushrooms, arugula and frizzled onion. Foie gras can be added for another $10, a fried egg for $1. It comes with fries. This dish is called the Executive Burger, and I’ve stared at its price every time I’ve eaten or drunk at this restaurant. It sounds like a delicious disaster, and its sheer audacity has dominated my waking dreams. I wanted to see it. I wanted to touch it. I had to taste it.

For this, I needed witnesses.

So I gathered a team of trusted eaters, featuring two star characters: Ryan Miller, Voltaire’s head barkeep, and Dan Myers, who bartends at the 403 Club and Port Fonda. On a wintry Monday night, we packed into one of Tannin’s booths, our curiosity and our money pooled.

“We’re going to be ordering the Executive Burger,” I announced to our server after our bottle of Champagne had been delivered.

He laughed. Then he looked a little concerned. Of course, I said, we want to add the foie gras and the fried egg.

We ordered red wine and we waited. Our server — Dan, we called him — brought the Beaujolais, and then he brought the burger.

It was breathtaking, an artful tower of … stuff. Its innards were held in place by a toothpick. A very long toothpick.

Miller carefully cut the burger with a steak knife. He and Myers had asked that the kitchen prepare the patty — made with Japanese wagyu beef — at the chef’s temperature of choice, and we were given medium-plus, likely because of the pork cheek and the foie gras. There was general agreement with this decision at the table, though the men seemed a bit dismayed that no red juice seeped from the sandwich’s center. The egg was fried over-medium, leaving Miller disappointed by the lack of yolk.

“I feel like this will fuel me to make executive decisions,” Myers said. “Buy! Sell! Buy! Sell!” He laughed between mouthfuls at his joke. “And I definitely feel like a straight boss with the foie gras.”

“Both Dan and I are knife-and-forking it,” Miller said, for the benefit of my recorder. “It’s literally impossible to eat it as a sandwich. This has become a plated meal. The burger is seasoned well, but it’s a little crispy on the outside. I don’t think the egg adds anything.”

“The mushrooms are great,” Myers said. “They add a meaty quality.”

Dan returned. “It has a certain charm, doesn’t it?” he asked before leaving us to keep working.

“No one should try to eat this burger alone,” Myers said as he ate the rest of the fries. “You don’t get a T-shirt for eating it, but the experience of it is a fun thing. And there’s wine, so why not?”

There is a certain charm, we finally agreed — the charm of the expense-account burger. It wasn’t the best burger any of us had ever eaten, but for now, I must rank it as my most memorable.