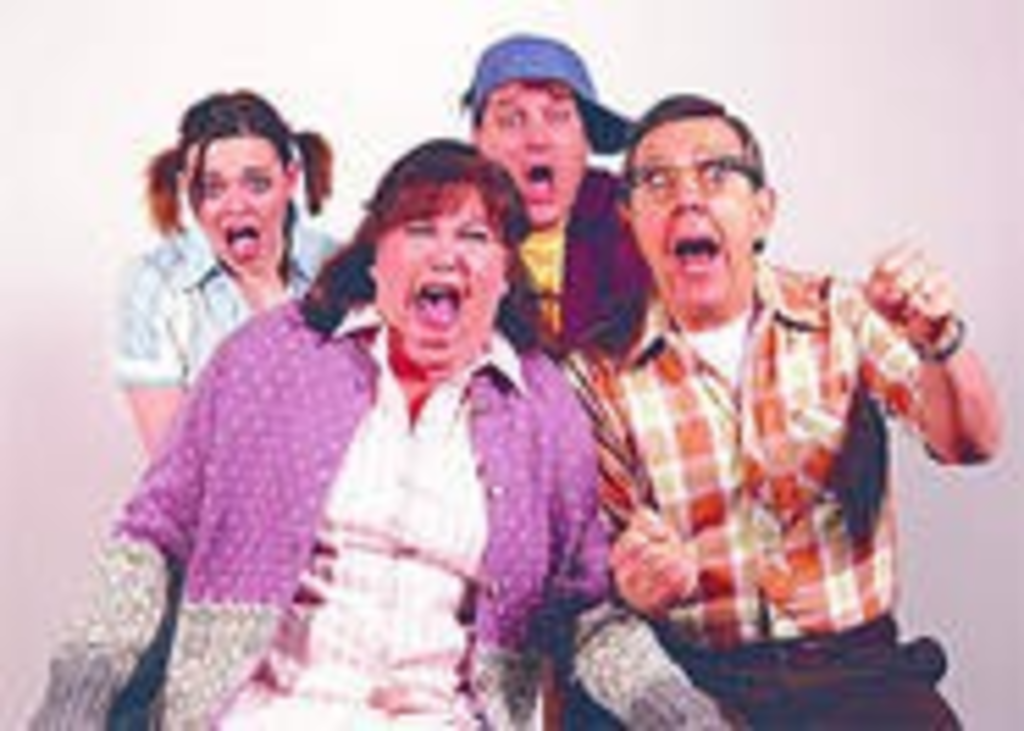 Before I carry on about how misty I got watching Leaving Iowa, a sweet and funny meditation on family and loss marketed by the American Heartland as a rambunctious, Vacation-style road-trip comedy, I must take this opportunity to lament some of the maddening cultural shorthand from the people who write and costume plays.

Putting your lead in a baseball cap, a T-shirt and an unbuttoned button-down and calling him a “newspaper columnist” is such a cliché that, from the moment Craig Benton first stepped on stage all decked out like Ray Romano, we all knew what it meant. This guy is thoughtful, and he comprehends his feelings, but he isn’t all feminine about it. This is the second Heartland show in a year to star a columnist dressed like this. (If you want a play about a poet, go to the Unicorn.)

Given Benton’s outfit, I braced myself for a long trip. But I found myself relaxing as soon as we hit the road. The cheap jokes that I expected to pass by as steadily as mile markers never showed up. Instead, Leaving Iowa is original and engaging from the get-go. It’s evocative of stars over the boondocks, of corn in endless rows, of those family-plagued road trips that you probably endured as a kid as well as the grim, grown-up drives that return us to places — and times — that may not be as we recall. Some of its themes may be shopworn, and sentiment might clog in the throat of the deeply cynical, but Iowa‘s sweet, unfussy climax had about three-quarters of the audience as dewy-eyed as I was.

Two road trips twine through the show. The first, set far in the past, finds Don and the full Browning family jaunting off for Hannibal, Missouri; the second concerns Don’s search across Iowa for a suitable place to disperse his father’s ashes. The first is hectic and funny, the second more ruminative. When they finally connect, we, too, feel we’ve really gone somewhere.

Benton plays both the adult and the childhood Don with warm wistfulness. He’s light, trusting the material and never forcing emotion. This sort of understatement is rare at the Heartland but wholly welcome. It’s even thematically appropriate: As Don says, “None of us are good at saying what we feel. After all, we’re from Iowa.”

As Don’s father, Jim Korinke deploys comic timing that’s as crisp as freshly minted money. During the tender moments, he wields the Korinke Twinkle with devastating effectiveness. The women shine, too, even though the play isn’t much interested in them. Debra Bluford beams hilariously as Don’s mother, shielding emotion behind an Iowa smile. And Jessalyn Kinkaid is wildly funny as Don’s sister, a kittenish and manipulative brat, sucking a thumb and letting her every feeling thrum through her entire body. It’s a performance of extravagant invention, her second great comic turn in the past year. She’s reason alone to pony up for the show.

Donna Thomason directs with brisk clarity, guiding her leads to detailed performances and always finding the emotional tug to guide us from present day to flashback. (My only complaint is that many scenes with Ken Remmert, who plays almost everyone the Brownings encounter as a bowlegged idjit, seem tonally off, set not in Iowa but on Mad TV.) The set is simple — essentially just a painted backdrop and two benches for the car — but it sneaks up on you like the beauty of the plains themselves. As Don stands outside at night, with Shane Rowse’s starlight glinting down and sound designer Roger Stoddard’s crickets sawing, you actually feel it: This is the middle of nowhere, huge and empty but somehow comforting.

Meanwhile, writers Tim Clue and Spike Manton swerve away from anything hackneyed. When Don is presented with his father’s ashes, I cringed, waiting for them to be spilled. But no. When it became clear that Don’s Iowa odyssey would be haunted by his father, who sometimes watches silently from behind the car, I braced myself for scenes of weepy bonding between son and ghost. No.

Further surprises: Don is never ridiculed for living in Boston, and I relished the scenes of the kids hitting each other in the backseat, dad threatening to pull over, and mom trying to dispense some whoopass without unbuckling her seatbelt.

In fact, the only cliché here — the only bit that seems familiar not from life but from plays and TV — is Don’s damn outfit.

And even that I’m no longer sure about. Early in the show, when I was smug instead of dewy, I kept thinking: Writers don’t dress like that. “That untucked button-down,” I scribbled in my notebook, “is as goofily iconic as the stripes on a silent-film jailbird.” But then I looked down at myself. I had on cords instead of jeans, and my T-shirt wasn’t bunched into my pants, but if Benton ever went on a crime spree, I’d fit right into the lineup.

Some clichés have some truth. The ones that don’t, I’m happy to say, come nowhere near this gentle show about driving around Iowa, thinking about your family.