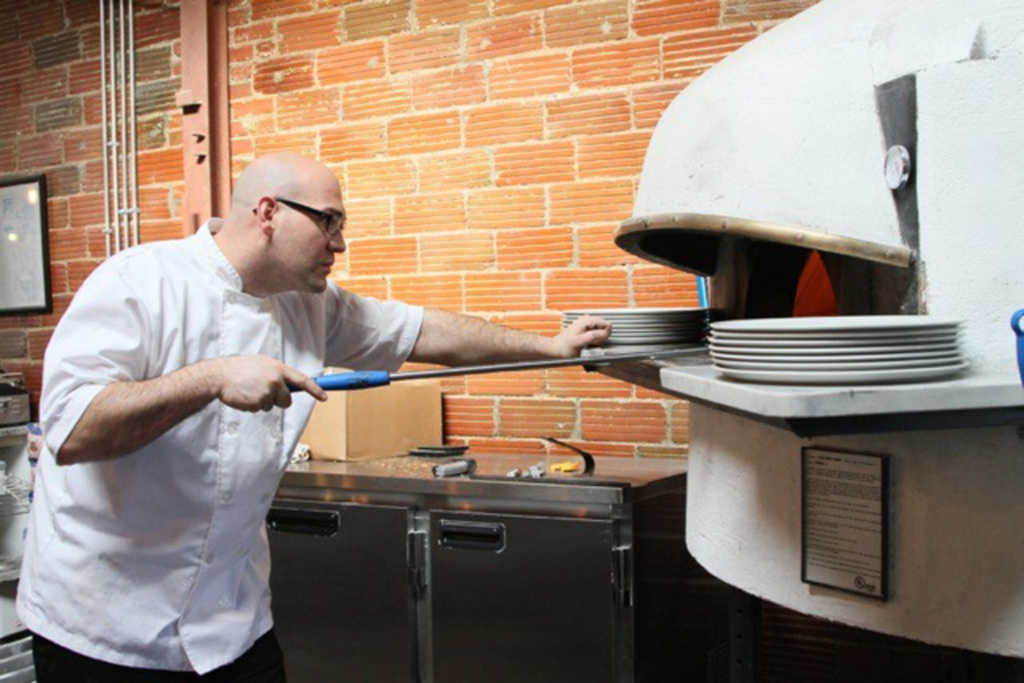 In Italy, a lazzarone is a scrounger, a bit of a bum. In St. Joseph, though, a lazzarone just might get some respect. Or, anyway, a great pizza.

“In Naples,” says Erik Borger, a former competitive bodybuilder who this year opened a pizzeria called Il Lazzarone in the Missouri city, “a lazzarone might only work just hard enough for a meal and a bottle of wine. I liked that idea.”

Borger is the antithesis of a lazzarone. It took considerable labor and planning to open his restaurant — and to make it the only pizzeria in the area to have been certified authentically Neapolitan by the American Delegation of the Associazione Verace Pizza Napoletana.

Borger’s storefront restaurant, at 1628 Frederick, in St. Joseph’s core, fired up its oven only six months ago, but the owner started the application process to become a true Neapolitan pizzeria long before he opened the doors to the 78-seat Il Lazzarone.

“It can take years,” Borger says of the stringent requirements. “I started studying the guidebook, which is 46 pages long, five years ago. You have to have a wood-fired oven that has a minimum temperature of 800 degrees. The pizza has to cook in 90 seconds. You can only use a spiral or fork mixer — anything else raises the temperature of the pizza dough.”

That sensitive dough can contain just four ingredients: a certain kind of fine-ground flour (Borger imports his powder-soft doppio zero flour from Naples, Italy), water, sea salt and fresh yeast. It must be rolled out by hand.

“You can’t have a mechanical process. They asked for countless videos, documentation, the floor plan of my building, even the names of the people on my staff,” Borger says.

The 30-year-old Associazione Verace Pizza Napoletana — the “they” Borger had to convince — was created by a panel of Neapolitan pizzaiolos “seeking to cultivate the culinary art of making Neapolitan pizza,” according to the organization’s website. Among the final-stage requirements: A representative of the group had to fly to the United States (on Borger’s dime) and make a random visit to Il Lazzarone.

“We think we know who it was, but he never identified himself,” Borger says. “But we passed muster because two weeks ago, we received our formal authentication from Naples.”

By then, the 33-year-old New York native had bought the old brick building on Frederick Avenue, a former radiator repair shop, and renovated it as a restaurant. He then spent more than $30,000 buying a true Neapolitan oven, an Acunto Mario Forni, and having it shipped from Naples, Italy, to St. Joseph.

Il Lazzarone serves beer and wine, and Borger is fussy about his brews. That’s to be expected: He lives with his wife and daughter in one of the St. Joseph mansions built by M.K. Goetz, the local brewing magnate whose powerful beer dynasty lasted until Prohibition.

“People come in here and are shocked that I won’t serve Budweiser or Miller Lite,” he says. “But that’s not what we’re about.”

Instead, Borger serves 30 craft beers — part of what he calls his “educational process” for St. Joseph. In another teachable moment, he doesn’t make ham, pineapple or pepperoni available as toppings. “We’re still explaining to our customers about prosciutto and pancetta,” he says.

Borger’s kitchen contains no freezer. Everything is made from scratch. His coffee is from Kansas City’s Oddly Correct, and his sausage comes from Alex Pope’s Local Pig. And there’s no soda. Borger, who has a graduate degree in exercise physiology, doesn’t drink Coke, but he eats a lot of pizza. (He used to weigh 300 pounds, he says, until he started training for the Mr. Missouri competition in 2005; he placed ninth.)

Il Lazzarone’s menu offers eight pizzas, including a delicious Margherita (San Marzano tomatoes, mozzarella, extra-virgin olive oil and fresh basil) that’s also available with fresh buffalo mozzarella. The restaurant is perfumed with the white oak that Borger burns in his whitewashed oven, which gets so hot that it’s still 1,000 degrees when he comes into the restaurant to open in the morning.

The exceptional quality of his product notwithstanding, his lessons are taking a little time to sink in, Borger says. When he first opened, he was disheartened when local customers seated in the dining room would puzzle over the menu and then walk out.

“If I can get people to come in and actually taste my pizza, 99 percent of them will love it,” he says. “It’s just getting them to stay. Neapolitan pizza is confusing to them. And some people just won’t pay $9 for a small pizza.”

More people are staying now, though, and the restaurant is turning a small profit. And Borger says he sees more familiar faces every week, including a loyal group from Kansas City.

“We’re building our audience,” he says. “And right now, we’re the only pizzeria in Missouri and Kansas certified as truly Neapolitan.”

Good point, especially if you’re too much of a lazzarone to make it abroad anytime soon. Il Lazzarone is open from 11 a.m. to 9 p.m. Sunday through Thursday and from 11 a.m. to 11 p.m. Friday and Saturday.