Brushing up against the Kansas City Plein Air Coterie 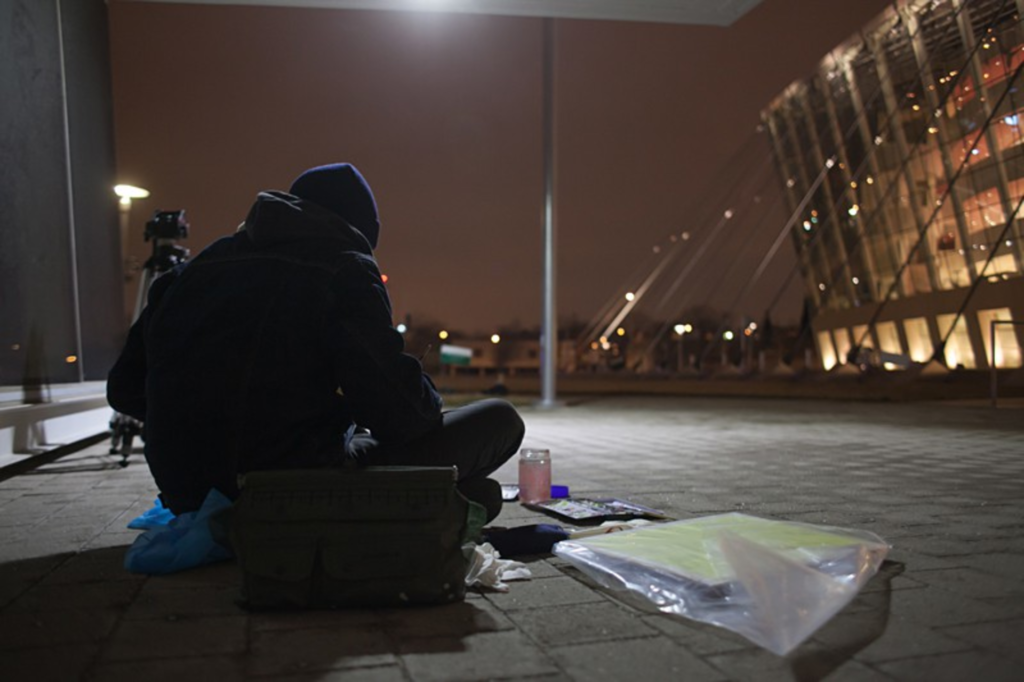 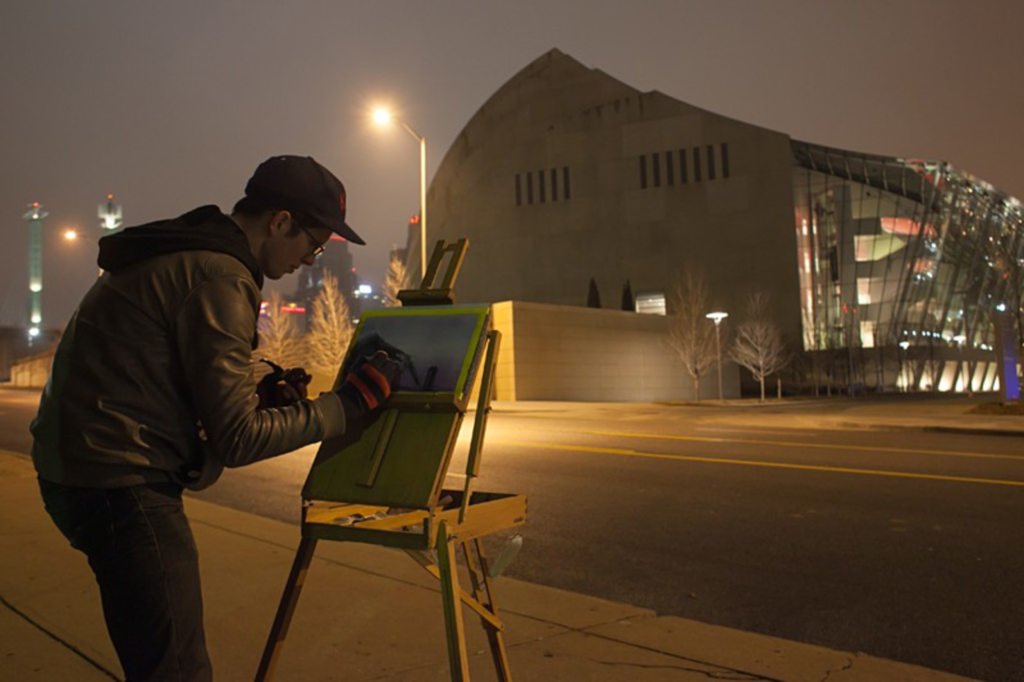 It’s a few minutes past midnight. A ragtag group, dressed in sensible layers and coated in rain gear, trudges north in the center of Wyandotte Street. They carry bags, wooden cases and plastic toolboxes up the otherwise empty street. A thick layer of clouds, colored a dull pink by the downtown light, drops a heavy mist, an insult magnified by a bitter wind.

On the south side of the Kauffman Center’s lawn, the group halts and assembles near the top of the parking garage’s stairs. They form a half-circle around one of their ranks, a woman known as the Scout. She opens a notebook, takes roll, records the time and the temperature and the wind direction. The Scout instructs everyone to meet here again in 75 minutes. They disperse to complete their mission.

This night marks the 50th session of the Kansas City Plein Air Coterie, a platoon of artists that has met every weekend for the past year to paint outdoors, regardless of weather. Its members have braved searing drought and temperatures low enough to freeze paint. They do this to record — on paper or on canvas or on board — what they see. Each Sunday morning at 8:30, or every 10th session at midnight, they head to a new location somewhere in the metro, and they observe and they paint.

If you had been present at KC PAC’s founding, you would have painted two friends drinking beer. Afflicted by cabin fever last February, Lee Piechocki and Robert Bingaman decided to take their easels and palettes outside and give “plein air” painting (a French term for painting outdoors) a try.

“It started as a reaction to spending long hours in the studio, kind of stressing out,” Piechocki explains. “It was almost like going golfing or something. Just get outside, get some fresh air, and get away from the studio and work.”

Joined that first morning by painter Nicole Mauser, Piechocki and Bingaman trekked to Burr Oak Woods Nature Center in Blue Springs. Bingaman made the rookie mistake of bringing along a table.

“You know when you’re carrying something across your house and you’re like, ‘I can’t carry this any longer,’ and you have to put it down? I was doing that every 50 feet,” Bingaman tells me. “I finally get there and make the shittiest painting I’ve ever made. I couldn’t do worse.”

But they kept going, and soon, other people wanted in.

The three original members, Piechocki, Bingaman and Mauser — as well as Kelly Clark, who attended the second session — call themselves the founders, and they operate KC PAC with a tongue-in-cheek formality. There are, for example, the “Rules in Brief” outlined in each week’s e-mail invitation — “Must: Make marks from observation; Must: Sup or sip with us; Must: Be a mammal, unless otherwise approved by the Scout; Had Better: Enjoy yourself and those around you.”

If the heraldry surrounding some KC PAC activities feels like something out of a Wes Anderson movie, one look at Bingaman on a group outing seals the association: slim-tailored jacket, tie, wooden pipe. Melissa Lenos, given the honorary title “Scout” for her efforts planning a plein-air session that was also a full-on weekend camping trip, knitted each of the four founders a scarf, each representing one of the four seasons.

All that esprit de treehouse helps keep KC PAC’s members from sleeping in on Sundays. (It also helps that they eat breakfast together before or after painting; cocktails precede the midnight raids.) It’s the same logic behind having a workout buddy — you’re more likely to show up if there’s someone else to hold you accountable — though no spin class looks like this.

To date, more than 50 people have joined KC PAC for at least one session. The group is open to anyone, as long as he or she makes marks from observation during the session. (Rules are rules.) I joined three sessions myself, and the notes I scrawled in my Moleskine for this article counted as my observations.

Tom Matt, a painter who moved to Kansas City from New York, tells me that KC PAC has been a good way for him to meet locals with common interests.

Founder Bingaman echoes Matt’s sentiment. “You don’t really have a choice of who you are going to meet,” he says. “It’s whoever decides they’re going to come. And what’s funny is, we find that we like everyone, because right then you have enough in common. You find value in standing outside for two hours no matter what and looking at something? That makes you like me.”

“They are trying to teach me to paint,” she says. “I’m a writer and researcher. It’s changed the way I concentrate. The first time I joined them, we went out in the woods. I had never drawn before, but I just sat and looked around me for an hour. It was a really appealing kind of slowness. It made me rush less.”

For some members, the problem solving involved in painting outdoors is part of the appeal. Artists use a variety of mediums — oil paints, watercolor, gouache, marker, pen, pencil and even woodcut — and each presents its own challenges outside the studio (starting with portability).

Member Chris Bell designs and builds his own easels and tables. During session 0049, he debuted an altered cigar box that opened to hold a postcard-size board in place. The inside of the box holds tiny bottles of oil paint. He puts the entire setup atop a camera tripod.

Dedicating a full two hours a week to painting from observation and adopting the Zen-like attitude that not every plein-air session can yield a masterpiece have had positive effects on many of the member artists’ studio production. After a full year of KC PAC, Bingaman says it has changed the art that he makes indoors.

“I kind of pictured it as kind of a critical response to my studio practice,” he tells me. “I could learn things and challenge myself. And what’s really happened is that it’s gotten into what I do. This has become part of my work and what I’m making. My process has gotten looser, and I’m observing and using source material in a different way. My compositions are getting less structured and rigid.”

At the end of the cold, dreary midnight session — No. 0050 — the members lean their artwork against the concrete steps leading down to the Arts District Parking Garage and snap quick cellphone-photo documentation. They form another circle on the nearby sidewalk and put their hands — some gloved, some charcoal- or paint-covered — together in the center, one on top of another. A shout goes up, the group’s motto: “Observe!”

Then they gather their handiwork and head to warmer, drier places. In the morning, they can sleep in.