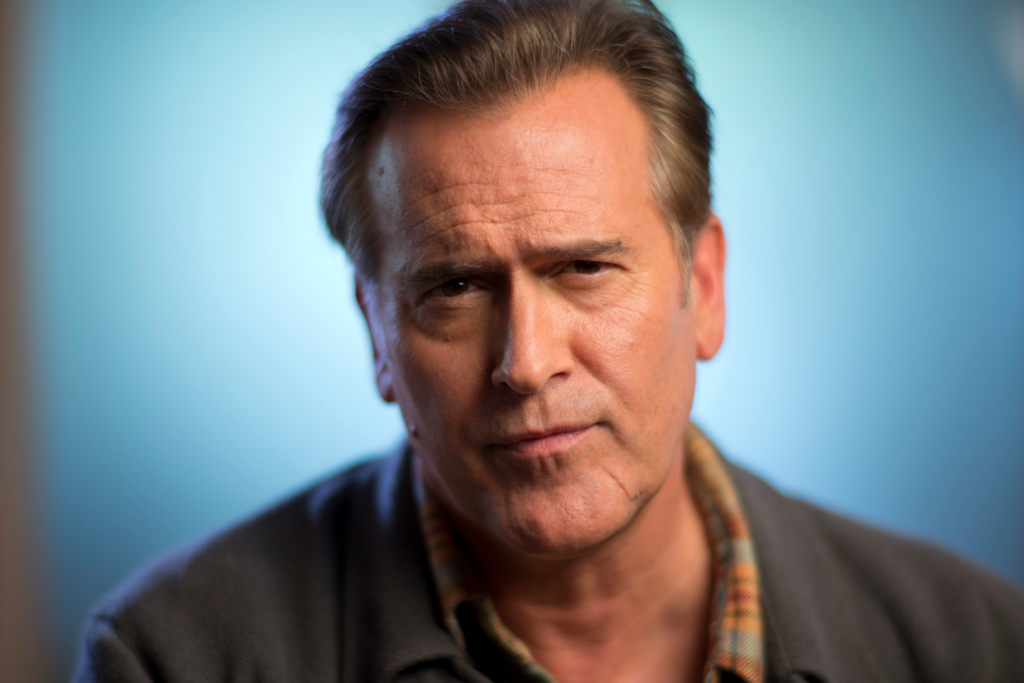 Your Harrison Fords and your Bruce Willises play action heroes who take out bad guys through determination, wit and physical commitment.

He’s the actor whose fanbase coalesces around Ashley J. “Ash” Williams, the Evil Dead franchise figure who imagines himself Indiana Jones but hews closer to Daffy Duck as he battles supernatural forces.

Ever since Sam Raimi’s 1981’s low-budget original Dead, Campbell has elbowed his way onto screens big and small, clearing a path for heroes who are life-sized or who simply get by on dumb luck. His IMDB page now runs to more than 100 TV and movie roles, and his 2002 memoir, If Chins Could Kill: Confessions of a B-Movie Actor, and a satirical novel (Make Love! The Bruce Campbell Way) are the twin pillars of a dedicated nerd’s nightstand.

In the 15 years since Chins, Campbell has reprised Ash for the Starz series Ash vs. Evil Dead but also expanded his horizons some. He was the lecherous ex-Navy SEAL Sam Axe in Burn Notice (which ran for seven seasons on USA), and critics who brushed aside his earlier work with Raimi took notice of his sensitive turn as Elvis Presley in Bubba Ho-Tep.

Campbell discusses his latter-day efforts in the new memoir he’s written with Craig Sanborn, Hail to the Chin: Further Confessions of a B-Movie Actor. He’s coming to town to sign the book (get it via rainydaybooks.com) and to present the third and most ambitious of the Evil Dead movies, Army of Darkness, at the Alamo Drafthouse Mainstreet on Saturday, September 9.

I talked with him last month by phone.

The Pitch: Do you think that there’s been a change in the movie marketplace, given that you now sell out Army of Darkness when you come to town?

Bruce Campbell: I guess people are more open to it. We can thank The Walking Dead for making horror more accessible and popular. That’s about all I can figure. I know on the book tour, we’re going good guns. I’m selling more books than I normally do. That’s by about double.

How has The Walking Dead has made horror a more respectable genre?

What The Walking Dead did was, they went for the drama and the human pathos, and — oh, yes — there’s zombies. They took that approach, so it’s reality-based, not so much fantasy. And they made it real, like a soap opera, so people are watching the soap opera with zombies. So, rather than being some shuffling zombie movie, they’ve got another layer going to it that interests people, obviously, but it’s helped elevate the genre because of how popular it is.

In the new book, you describe how contrary to the image people have of how actors live, you had a long and difficult relationship with your phone company.

That’s right. Just like anybody else, no different. Relatability certainly accounts for something where it’s hard for me sitting here to relate to Bruce Willis. I’m not sure I’d know what to say if I met him. That’s a different world than me. You know what I mean?

One thing that emerges from your books is that a real B-movie should not be confused with inferior product.

Don’t make the mistake. B-movie doesn’t mean bad. The only thing it means is that you have less money, fewer stars, less PR. It wasn’t made by a studio — for the most part. You’ve got to shoot it faster. You’ve got to shoot it cheaper. But as a result, I think sometimes that scramble for innovation can lead to a really cool movie.

Sometimes you get up to those A-movies, and they move really slow. It’s so well planned-out. Everybody’s going by this well-planned-out storyboard that you’re not going to change much because it would be too expensive to change the set or do whatever. Low-budget movies can move much quicker, much more fast and loose, and that’s how I like to work. I like to work fast.

Would you say it was like that when you went to New Zealand to reprise the role of Ash?

Yeah. TV’s fast. This is my fourth TV show down there. Each one has moved at a very good pace. That’s why I like TV.

In the recent Starz series, much of the humor relies on Ash’s, um, maturity.

I can’t hide it anymore. You might as well embrace it. He wears a man-girdle and dentures, shoe polish in his hair, the whole bit. That’s the kind of hero I want to play. He has a sense of destiny as well, and a little bit of perspective on it as well, a world weariness. But he’s crazy like a fox. Hey, man, you’d better hope that Ash is in your foxhole when you go to battle.

Ash was unique as a horror protagonist because, whereas Dana Andrews in Curse of the Demon might have been initial a supernatural skeptic but learns quickly about the supernatural danger, Ash is consistently clueless and survives anyway.

He’s a survivor, but he’s a regular Joe. Hopefully, that’s why people can relate to him because people can go, “Hey, he’s just like me. He doesn’t know anything.”

He also says some politically incorrect things — like, he doesn’t discriminate against Asians because he loves their massages. But no one objects. Why do you think that is?

Because it’s OK to have flawed heroes. There’s too many heroes who are too boring, too perfect. I’ve only played one perfect hero, and that was in The Adventures of Brisco County Jr. He was smart. He was capable. He was honest. All that sort of stuff. That has its charms to a degree, but it can be very limiting, and it can be really boring.

I’ve turned down good guy roles in order to play the bad guy because it was a better part. I’ve just commissioned two writers to write a western for me, and they wrote a boring lead guy and an amazing bad guy. I’m like, “Guys, you’ve got to turn it around. I need an amazing bad guy, and an equally amazing good guy.” It’s tough to write an interesting hero.

You’re coming to town to present Army of Darkness to a packed auditorium at the Alamo. Why do you think the film has both more respect and more fans than when I saw it in 1992?

Some movies age well. Some movies don’t age well at all. They just disappear. It’s really gratifying to have something that’s 25 years old is still somewhat relevant. The movie was an absolute nightmare to make. It wasn’t fun for us. My wife and I had just gotten married. We almost got divorced without being married for a long time. She worked on the shoot as a costume designer. The whole thing was a nightmare, so we’re actually glad that people seem to like it because we sure didn’t have fun.

Hercules, Xena and Burn Notice were big shows, and were the kind of big projects you poked fun at in Make Love the Bruce Campbell Way. Every week people watched Burn Notice to find out what sleazy things Sam Axe might do.

I’m not sure why they were watching. Hopefully, it was just a good show.

In Hail to the Chin, you talk about making Alien Apocalypse and The Man With the Screaming Brain in Bulgaria and Burn Notice: The Fall of Sam Axe in Colombia. You mention the local quirks of those places, but you never talk about the people there condescendingly.

No, because these are people who are working as hard as they can. The people in Bulgaria were working incredibly hard, post-Communist, but they had been under such a thumb for 40 years that they still seemed like they were in such a daze.

We’ve got to be careful as Americans not to be “ugly Americans.” We don’t have it all figured out, either. It takes a little patience. Yeah, I got yelled at a movie screening from a woman from Bulgaria because she thought I was being mean. I wasn’t being mean. I was telling it like it is. It doesn’t make it bad. It is what it is.

The book also lists movies and TV shows you’ve made that haven’t had a proper release. I’m eager to see you play a country singer in Highly Functional.

I am, too. I’m doing for people to see it. Those are sometimes some of the biggest frustrations of the entertainment business is that you’ve finally got a part where you go, “I’ve got some blood in this. I get to do some real acting. It’s comedy. It’s drama. It’s got a little pathos.” And then it disappears. It falls of the face of the earth for, like, two years. Fortunately, it’s crawling its way back. We’ll see if it makes the festival circuit.

We’re talking on the day after the 40th anniversary of Elvis Presley’s death. You played him in Bubba Ho-Tep, but as more of a hypothetical version. When a fan in Kansas City once asked you to do your Elvis, you responded, “Am I your monkey?” From seeing the movie, it’s not something you can just do like a standup comic’s impersonation. Your performance took a lot of work.

Yeah, but I say that whenever somebody wants me to quote a line.

You’re fighting a mummy in it, but it’s a character study.

That’s what got me interested in it. It’s not really a mummy movie. It’s a movie that ruminates about what you do with old people and what happens when we forget about people. It’s about loss and regret and a lot of interesting sub-themes. That’s what I liked about Joe Lansdale’s [original] story. Now, granted, it was the weirdest script [by director Don Coscarelli, Phantasm, John Dies at the End] I’d ever read, but I said yes because of the underlying essence of it that gives you a little bit of heart to the movie.

You and your old collaborator Sam Raimi actually managed to make a superhero movie with Spider-Man 2 that managed to be a great movie that just happened to be about a superhero. In one of your previous visits, you described your cameos by saying in the first movie you named him and as an obnoxious usher in the second one you defeated him.

Sam nailed it. I’d put Spider-Man 2 up against pretty much any superhero movie. Technically, I’m the only character who’s ever defeated Spider-Man by not letting him into the theater to see his girlfriend.

Do you think your books make it easier for fans to relate to what you and your collaborators do?

I like sharing information with people. Hopefully, it’s info-tainment to where they can get a little of behind-the-scenes, a little bit of the sausage being made, at least from my perspective. You’ve got to present it in a hopefully entertaining way. When I read actors’ books, and I read them all the time, I want to hear about that. When they gloss over projects, I go, “Huh? I want to hear about that.”