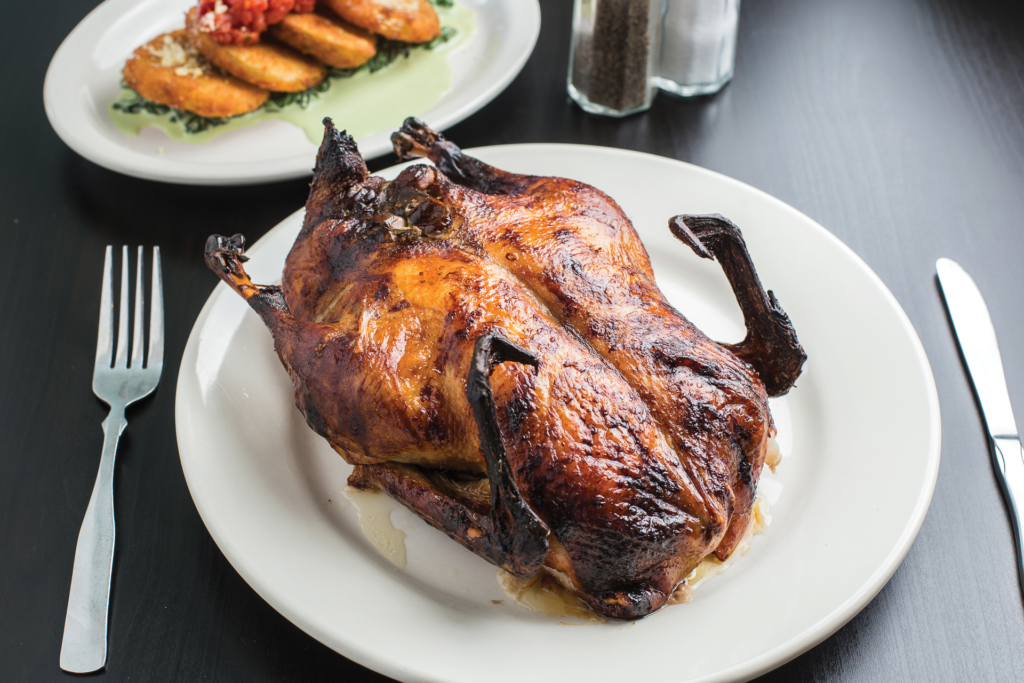 It was 5:30 p.m. on a Thursday, and Brookside Poultry Company had already run out of chickens.

There was plenty of chicken, explained our server, a supremely patient man named Justin. My tablemates and I could order an individual thigh, a craggy-coated breast, a pile of saucy drumettes, a something-salad sandwich. But the whole birds? 86’ed.

I craned my neck to peek at the roaster behind the bar, where a lone fowl rotated slowly like a beauty pageant contestant. I suspected Justin was holding out on me.

“We do have one duck left,” he said, following my gaze. “A couple other tables seemed interested, but if you’d like, I could put a hold on it for y—”

“Put a hold on it!” I cried, slapping the table like a gambler. I hadn’t yet looked at the menu; I wasn’t even sure I wanted the duck. But I’m a sucker for artificial scarcity — and, as I soon discovered, for Chef Charles d’Ablaing’s duck.

Chef d’Ablaing opened Brookside Poultry Co. three months ago, and it should tell you something that the restaurant reliably runs out of its whole ducks and chickens long before the dinner rush (and if you want one, call ahead: while the staff won’t reserve tables, it will reserve birds). Much of that success is due to d’Ablaing’s reverent approach to the classics. All of the poultry is wet-brined for up to 72 hours to maximize juiciness; all of the condiments, from the wing sauce to the blue cheese dressing, are made from scratch in the restaurant’s stamp-sized open kitchen.

Previously, d’Ablaing served as executive chef for the Hotel Sorella and Webster House. But Brookside Poultry Co. is a lower-priced, lower-fuss outfit, the kind of Southern-inspired neighborhood eatery where Marvin Gaye and Aretha Franklin blare over the speakers while vellum-skinned birds spin like jewels in a glass-front case. There’s wine, but it’s served in a can. There’s art on the walls, but it’s exhaustively, exclusively chicken-themed. You don’t get the sense that anyone involved hired (or knows) an interior decorator. And at these prices, you don’t much care.

Exhibit A: the $4 fried chicken thigh, which swims in a sour-cream brine for two days before it’s cooked. You can order a breast for $7, and it’s fine, but there’s no reason to splurge. The thighs at Brookside Poultry Co. are boneless, but the brine keeps the meat tender and flavorful. The breading is crisp and thick without skewing greasy. I’d turn up the batter’s seasoning a bit — a single click of the spice dial — but it’s satisfying as-is.

Even better are the fried wings, enormous drumettes tossed lightly in a tangy sauce so the breading stays shatteringly crisp. A disclaimer upfront: these are mild wings, not hot wings. I’d peg the heat level at “Christian Mingle.” But the sauce is irresistible nonetheless: a blush of heat, a touch of sweet, a vinegar twang that’s assertive but not too astringent. Although the cups of ranch and blue-cheese dressing served alongside were cool and creamy, what I really wanted was another cup of that wing sauce for dunking. If the restaurant offered a hotter but similarly balanced sauce, I’m not sure I’d order wings anywhere else.

White-meat lovers can get a similar experience with the chicken tenders, pudgy spears of boneless breast meat tossed in that wing sauce. As much as I love wings, the trade-offs are tempting: the tenders come with saucy sliced jalapenos and tiny leaves of charred cabbage tipped with tongue-teasing caramelized sugars.

Most of the sides here are a la carte, but you can order any of the fried chicken dishes as an “entrée” for an extra $7. That expense nets you a generous helping of plump, butter-poached green beans and a small hill of gooey-creamy cheddar potatoes. This is rich fare, and the sides come dangerously close to gilding (greasing?) the lily. Just looking at the menu can make your jeans tighten around you in warning.

The “Best Chicken Salad Sandwich” is the brightest and freshest-tasting option here. I don’t know if this rendition was the best I’d ever had, but it was certainly good. The spit-roasted chicken was moist, the dressing was clean and light, and the toppings were just right: thick slices of avocado, thin wheels of tomato, and a confetti sprinkle of alfalfa sprouts. Stout, soft slices of multigrain bread gave the sandwich structure without overwhelming it.

Still, even that sandwich was leadened with a side of (very good) house fries — home fries, really, each chubby wedge handsomely browned and dusted with parmesan and chives. The fries came with a too-large ramekin of a pink-tinged sauce reminiscent of Comeback Sauce, a Southern staple blending mayo, ketchup, paprika, and chili. Brookside Poultry Co.’s version was benign — a little tangy, a little sweet, not much spice.

If you want to get away from the deep fryer, stick with the spit-roasted poultry. I was glad I gambled on the duck on my first visit. I was doubly glad I ordered it before glancing at the menu, which described it as a “whole duckling.” The cutesy diminutive was a bit off-putting; I steeled myself for the arrival of a teacup-sized Easter animal, batting its liquid eyes demurely at me from the plate.

But if the bird I tried was a duckling, it had a Midwesterner’s grip on childhood obesity. The duck looked adult-sized, with more than enough meat for two hungry diners. And that meat — moist, dark, rich as Sheldon Adelson. I plucked a supple strand off the bone and my fingers came away dewy (don’t cringe: fat is flavor). And the skin was a dark mahogany-brown, crisp but light.

At $32, that duck was the most expensive thing on the menu — though it was a fancypants, pasture-raised duck from the Barham Family Farm in Kearney. For $20, you can order a mutt duck of indeterminate origin. The flavor is similar, but you won’t get the semi-smug satisfaction that comes from eating local.

Brookside Poultry Co. sells about half of its whole birds as carry-out orders, a sign that it’s already integrating smoothly into the neighborhood. Given the poultry’s consistency and relative value, it’s not hard to see why. D’Ablaing and his staff don’t waste time on dollhouse garnishes or pompous dish descriptions. They just put out solid food with a strong sense of identity. On each of my three visits, I left feeling refreshed (if a bit too full). The small, done-right menu is a welcome antidote to a restaurant moment dominated by master-of-none menus that can read like confused grab-bags of hipster clichés.

Which is not to say that everything on Brookside Poultry Co.’s menu is perfect. The “Izabella” sandwich was promising but miscued the night I tried it — the chicken thigh was juicy, but the sandwich was a messy affair. Between the generous smear of chive aioli, the white wine-butter braise, and the weepy tomato slice, there was too much moisture to keep the delicate rice-flour breading crisp or the brioche bun intact.

The cheddar biscuits were savory but doughy on one visit and so soft they fell apart on another. And the black-eyed pea soup was a bit bland, though the broth was silky and the beans tender. It also arrived after my dining companion and I had received — and finished — our entrées. The restaurant only seats 30, but the small kitchen can still seem overwhelmed at peak times. 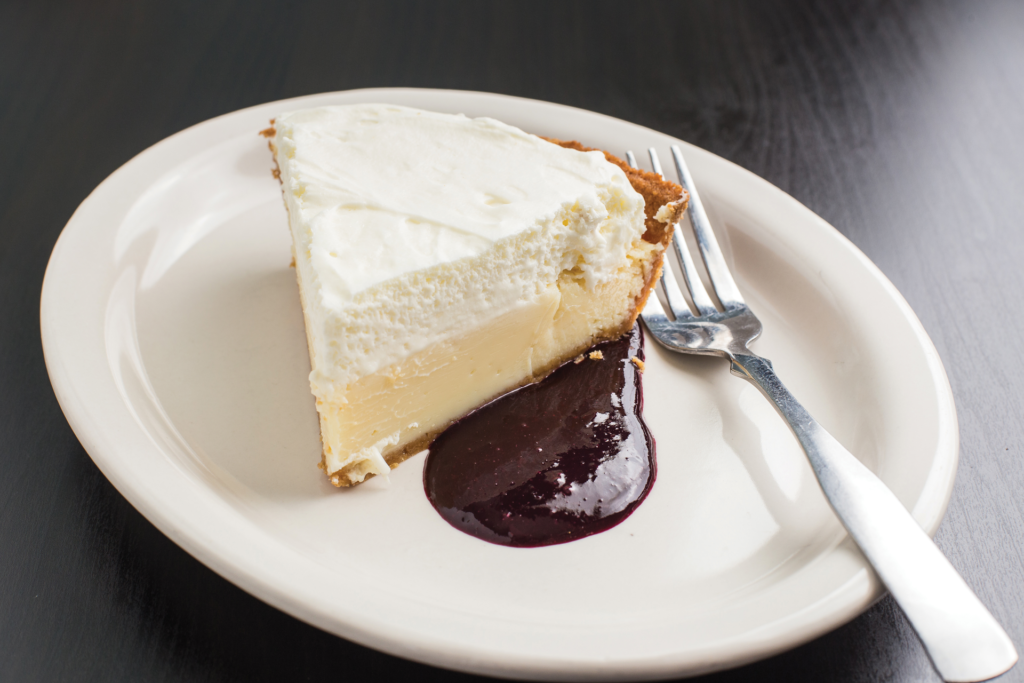 Even if you’re there on a busy night, the dessert is worth waiting for. Brookside Poultry Co. offers two diner-style pies, both with chewy graham-cracker crusts. The key lime pie was perfectly textured, with a supple, silky-smooth custard. But the lime flavor was a bit too subtle; I wanted something sharper and brighter to round out the meal.

I preferred the chocolate pie, which featured a divinely dense and sticky-smooth chocolate filling the texture of hot fudge. I wasn’t hungry when the plate arrived — I’d promised to share the dessert with the table — but I found myself parrying their forks away with the predatory hiss of a she-Gollum.

Hey, if you’re going to indulge, Brookside Poultry Co. is the place to do it. This is solidly a “buffet pants” kind of joint. After my first visit, I found myself prepping for the excursion the way other people do for hikes. “I’m almost ready,” I told my husband, probing my closet for a roomy cult robe or caftan. “I just need to change out of these skinny jeans.”

If I keep eating at Brookside Poultry Co., I may never don them again. But if they keep making those wings, that’s a sacrifice I can live with.

Nibble on the wings and share the “whole duckling” with a friend. Dessert — if you have room — is the chocolate pie.