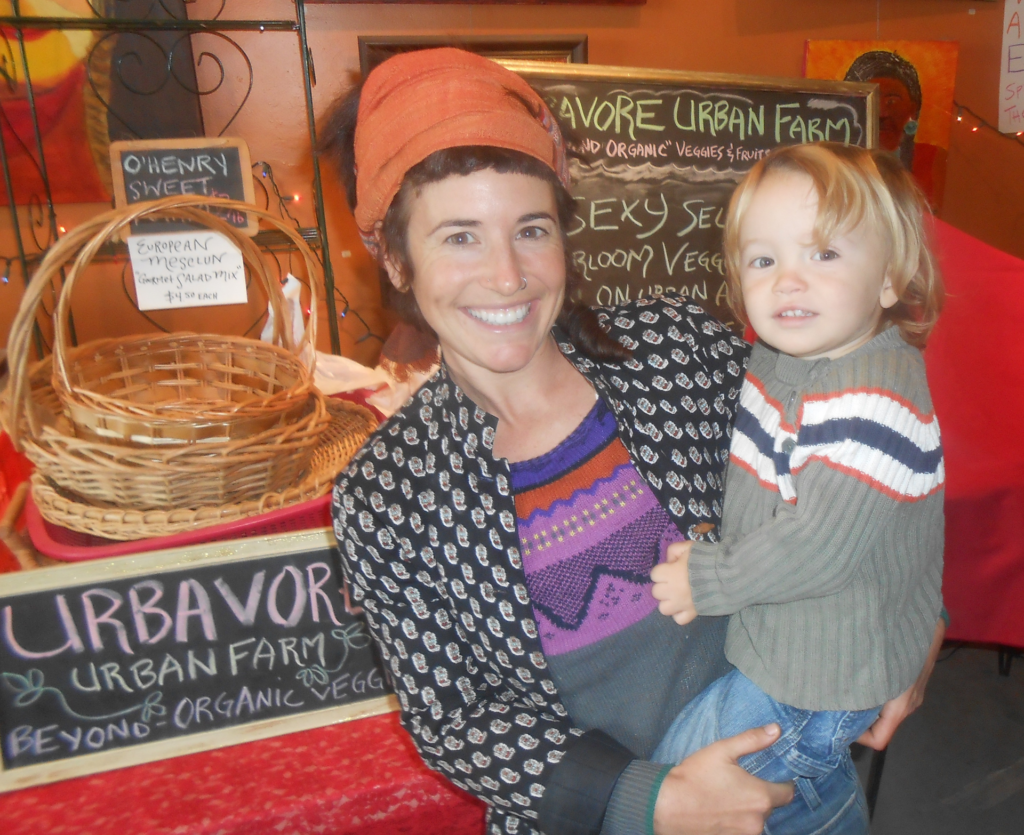 Artist and restaurateur Jeff “Stretch” Rumaner threw out that word a week ago commenting on the new (and still unopened) Papa John’s Pizza carryout venue opening in the building owned by Salvaggio’s parents, Bruce and Barb Salvaggio. The BadSeed Market, run by Brooke and her husband, Dan Heryer, at 1909 McGee, is also a tenant in the building. “A rent-paying tenant, I might add,” Brooke Salvaggio says.

Rumaner’s quote: “I find (the Papa John’s location) kind of hypocritical,” Stretch says. “It’s like putting a Starbucks next to YJ’s Snack Bar. Hey, I’m not a fan of Papa John’s, but then again, I’ve never tried it.”

Brooke Salvaggio hasn’t tried one either, but she’s being very diplomatic about her parents’ decision. Some of her customers, however, have been put out.

“My parents and I have very different values and viewpoints on culture and what a community looks like,” she says. “And I admit, I can be an extreme personality.”

Salvaggio says she had no imput on who leased the building – which was owned, for many years, by her grandfather, Nicholas Salvaggio – and was stunned to find out that the Papa John’s franchisee had signed a 15-year-lease for 1911 McGee. “For one thing, it never occurred to me that a fast-food restaurant would ever want to come to this part of the Crossroads. I wouldn’t think it would be their demographic here.”

But corporate chain restaurants, which were once wary of downtown neighborhoods, are taking a fresh look at the urban core, which is, in many large cities, experiencing a boom in gentrification. A local Jimmy John’s Sandwich franchisee wants to build a drive-thru at Ninth and Broadway.

The brick building that houses the storefronts at 1909 and 1911 McGee was once the site of the Scott Color Co., which painted automobiles. At age 15, Nicholas Salvaggio – the son of Sicilian immigrants – began working for the business as a delivery driver. He later bought the business.

When Nicholas turned the building over to his son, Bruce, in 2006, Brooke Salvaggio leased the 1909 part of the building as a spot to sell her organic produce and even lived in the building for a while. She currently lives and works on a 13-acre farm on Kansas City’s East Side with her husband and their 2-year-old son, Percy. A couple of local businesses moved in and out of 1911 McGee over the past few years, but no one was willing to sign a long-term lease until Papa John’s Pizza came calling.

“This is an age-old story,” Brooke Salvaggio says. “Artists and creative people come into a neighborhood and start the gentrification process, and then the corporate chains follow. This neighborhood is really coming back to life. When I moved here eight years ago, it was a ghost town.”

Salvaggio says that when she first opened the doors to BadSeed Market, she “essentially opened up my living room.”

Her business has grown, and her customer base is intensely loyal. And many of them are none too happy about her new next-door neighbor.

“One customer asked me, ‘How could your parents do this to you?’ Another customer was appalled that the entire Crossroads didn’t rise up to protest the Papa John’s,” Salvaggio says.

“It made me realize that this issue is bigger than I thought it would be. These are not just my personal feelings, but it’s affecting an entire community. I’m actually impressed that my customers are so passionate about healthy eating and organic foods. They’re really showing their dedication.”

That being said, the Papa John’s Pizza is paying rent to her parents, who have very different opinions about the addition of a corporate chain to the neighborhood.

“My dad thinks it will bring a lot more foot traffic into the neighborhood. And if those people picking up their pizza happen to peek next door and see a colorful and weird space, they’ll probably walk in to discover good food and funny people,” Salvaggio says. “I’m here to be an educator and a resource to this community. I try to find the positive in any situation.

“I just want to continue to act with integrity and as an advocate for healthy, natural food. I have my own beliefs and ethics, but at the end of the day, I want to be respectful to everyone.”

BadSeed Market is now operating on its winter schedule. The market will be open every Friday from 4 to 8 p.m.