Brian Roberts is building community through The Black Pantry 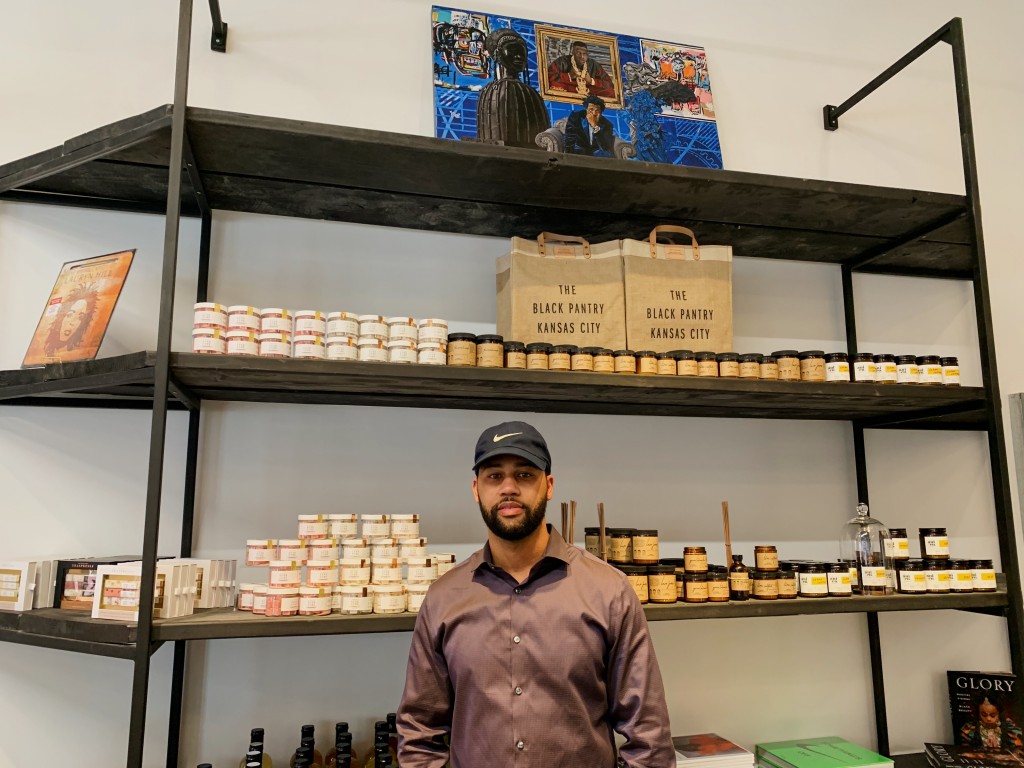 Brian Roberts began his pop-up, The Black Pantry, in November of 2020. In just five short months, Roberts went from pop-ups in The Black Pantry trailer to a permanent space on Martini Corner that opened April 8. The Black Pantry’s first pop-up was with Made Mobb—a Kansas City-based streetwear brand.

“[Made Mobb] kind of put it in my head. They didn’t really say it directly, but they were kind of like, you could do a pop-up first,” says Roberts. “That’s when the light went off in my head that I should build relationships with businesses instead of going after people and chasing people around. It took off from there.”

Roberts also did a pop-up with Made in KC. So when Made in KC reached out to Roberts to share their new space in Martini Corner—and open up his storefront in the process—saying yes was a no-brainer.

“I have something, not only a unique product, but my drive, creativity, my will to make it happen,” Roberts says. “They wanted to help mentor me through this process. It was able to get me to my next level way quicker than what I was expecting, and/or ready for. I felt like missing this opportunity would have been a huge loss—for not only myself, but for the community and other people who are looking at opportunities to do things like this. I can show a proof of concept, I can show a blueprint.” 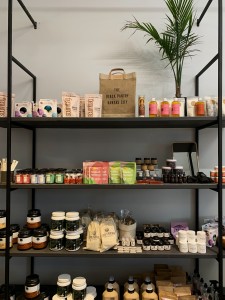 Some of the products at The Black Pantry.// Photo by Savannah Hawley

The store on Martini Corner is half Made in KC, half The Black Pantry. As one walks into The Black Pantry, they’re greeted by a whole space full of products created by Black artisans. Roberts carefully chooses those products—reaching out to Black-owned companies that aren’t readily available in Kansas City as well as local Black business owners who now have a bigger platform. The store created a sort of community between creators and shoppers, as well as an atmosphere where all people can feel welcome.

“[My favorite part is the] relationships with people and repeat customers that continue to come in. That’s been the coolest thing,” says Roberts. “It happens so fast—and there are people who have been to my pop-ups and to my store 5, 6, 7 times. I literally thought when I was going to do this I was going to be on the corners hustling, waving people down. I was willing to do that because I was so passionate about what I knew that I had. I have all these quality products that were very good and no one else in Kansas City had it.”

Ultimately, Roberts did not have to hustle to make his business a success. In a short span of time, his store has become a destination—and his pop-ups an event that people will follow all over the city. Roberts is using that momentum for The Black Pantry to provide a platform to Black businesses and a safe, trendy space for Black people to visit.

“I’m trying to get money into the hands of Black businesses who are intentionally building businesses that are going to sustain—and also just building cool spaces,” Roberts says. “Building cool spaces that make everyone feel comfortable, but especially Black people feel comfortable. Because as we go into these trendier areas there are not a lot of areas where, as a whole, and I’m not speaking for the individual, but as a whole, we don’t feel safe. We can’t go in and be ourselves without someone else looking at us in a biased fashion.”

The Black Pantry’s location and partnership with Made in KC are all about making Black people welcome in spaces where they’ve historically been neglected or pushed out. Though many of those spaces haven’t been overtly racist, it is still noticeable and palpable based on the atmosphere. That is what prompted him to start The Black Pantry in the first place.

“It’s not necessarily like in your face, but you can tell like you’re not 100% welcomed, or you’re being watched,” says Roberts. “I wish we had a space like [The Black Pantry]. I wish they would play music like this. You know when you walk into a particular space, who it’s catered to. A lot of these cool trendy spaces where you know they don’t cater to Black people.”

If trendy and welcoming was the goal, Roberts accomplished it and then some. He’s still doing the occasional pop-up—and will most regularly be popping up at Paradise Garden Club and Friend’s Sunday farmer’s market. 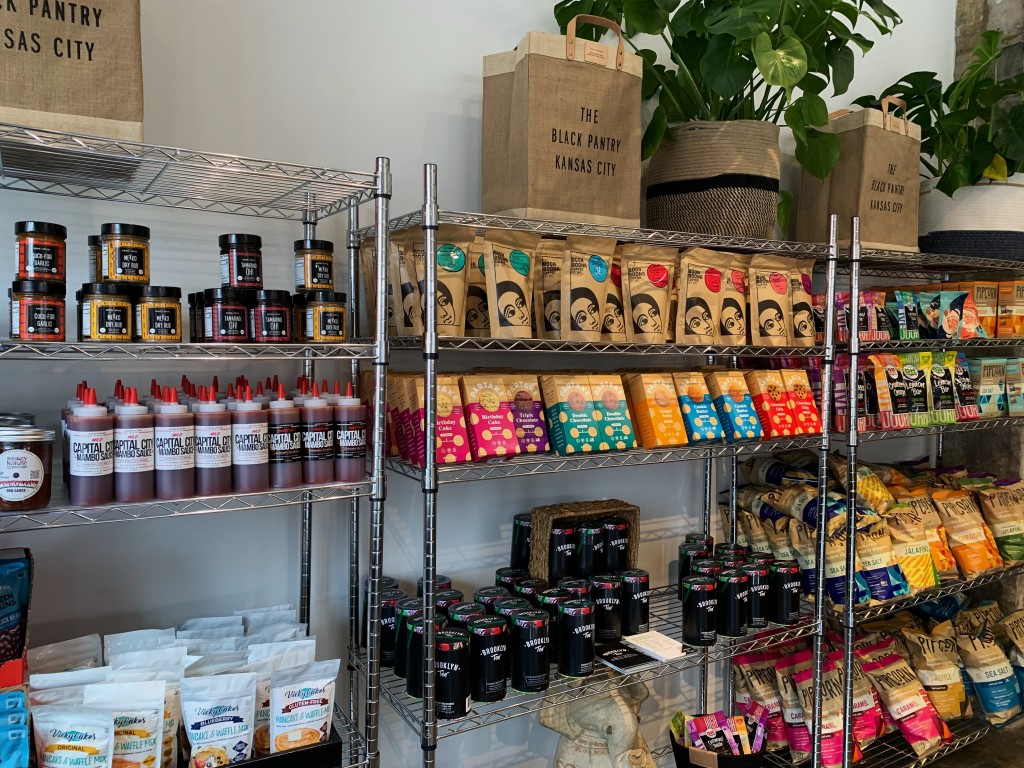 The food selection at The Black Pantry.// Photo by Savannah Hawley

On May 15, The Black Pantry will be hosting a “Kids Need Pop-ups Too,” inspired by his children.

“I got three kids of my own, and we’re doing all these pop-ups and they’re bored to death. But then when I opened the store—and at my grand opening and I was watching other kids that came in—but they really loved the art. They will of course grab the cookies and Pipcorn. So [I thought], we should have something that is featuring items for kids.”

The pop-up will feature the cookies and Pipcorn, as well as locally made art, children’s books, pop, clothing, and balloons.

The store features food, self-care products, books, records, clothing, candles, and more. By design, some of the products are only available in Kansas City at The Black Pantry or by seeking them out online. The Black Pantry is open Monday-Saturday from 10 a.m. to 7 p.m., and Sunday from 12-5 p.m. If you’re lucky, you just might be able to see Roberts there. 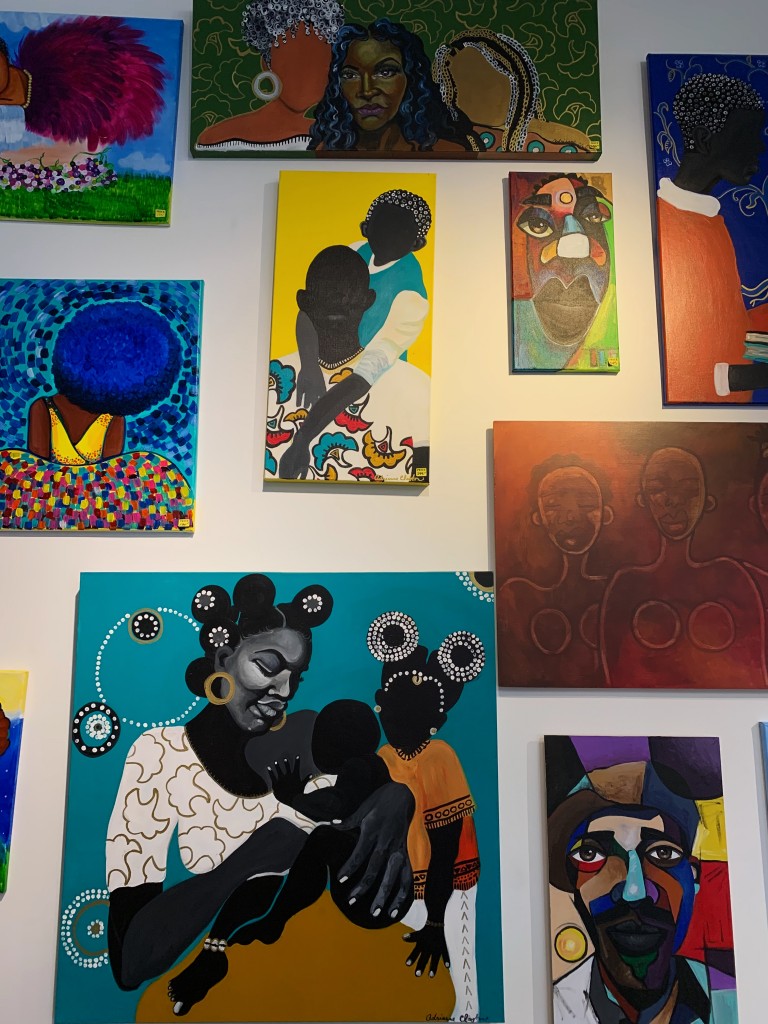 Art for sale at The Black Pantry.// Photo by Savannah Hawley