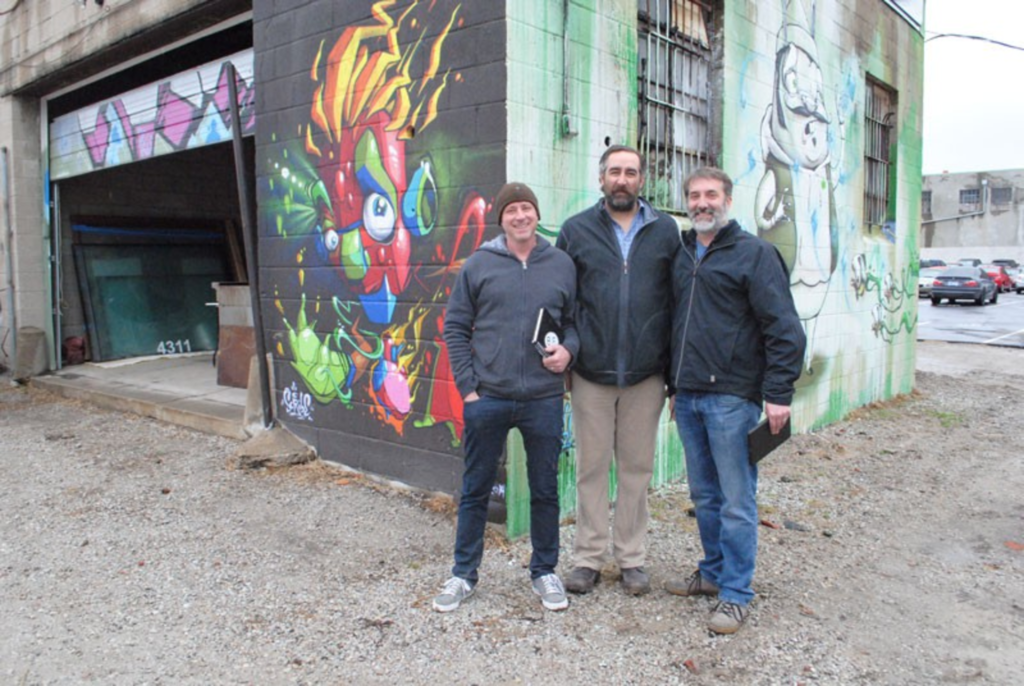 This is the beginning,” says Keith Thompson on a misty, gray mid-March morning as he looks at the graffiti-covered building at 1829 Oak. Metal bars block the windows, and the wooden front door would have looked at home on the set of The Wire.

Thompson has worked as the brewmaster at McCoy’s Public House since its 1997 opening, but he’s about to make his mark here. You can already see it: a “BE” he has added to one of the windows in white paint. This tagged-up address is the future home of Brewery Emperial, a four-vessel, 15-barrel brewhouse that Thompson says he’ll open in August with Room 39 restaurateur Ted Habiger and friend Rich Kasyjanski. The partners have met me here to talk about their venture.

“The Crossroads has always been a goal for me,” Habiger says. “I’ve been looking down here for four years for a possible place to do something else.”

“It was just time for me to do a brewery,” says Thompson, who is still working as a consultant for McCoy’s. His longtime employer, he adds, is “still my baby and my legacy.”

The lease for the building, on the same block as Grinders and CrossroadsKC, is signed, and the loan approved. The next step is to build out the 16,000-square-foot property, which Thompson says is “a little bit of a blank slate.” By which he means: four cinder-block walls, few (if any) utilities, some old stools from the Velvet Dog, a line of kegs. They’re consulting with Jonathan O’Neil Cole, of Pendulum, on the building design.

They expect construction to begin in about 10 weeks. “Once we break ground, it will probably take us three months to start brewing,” Habiger says. “And maybe a month after that, we’ll be open.” 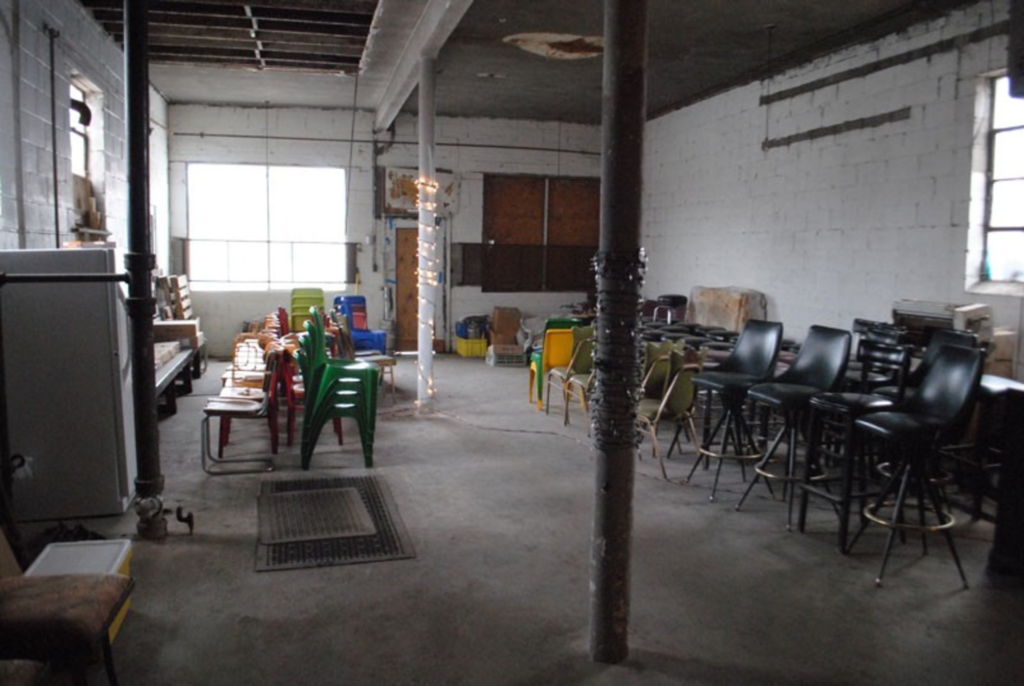 Thompson, Habiger and Kasyjanski walk to the east end of the building — into the future kitchen — and open the garage door and enter a muddy parking lot where the “hot side” of Thompson’s brewhouse will be built. They point to a couple of murals by graffiti artist Scribe. Those will stay, they say, but the partners will likely paint over the rest.

Custom Metalcraft, in Springfield, Missouri, will build Brewery Emperial’s tanks. “We’ll be able to double-, triple-, quadruple-batch more efficiently,” Thompson says. “So it’s built for production. However, when we want to do our one-offs, we don’t have to brew 60 barrels of it. We can do a 15-barrel batch.”

The partners have already purchased a brewhouse from Japanese brewery Hitachino Nest, which recently upgraded its system. A friend of a friend has translated the control panel’s Japanese labels. “He’s been working through the inside, figuring out where everything goes,” Thompson says. (As a tribute to Hitachino Nest, Brewery Emperial may incorporate owls into its logos.)

On the building’s north side, a free-span steel structure will house the brewhouse cellar and fermentation tanks. The building’s south side calls for an open-air biergarten (for about 150 drinkers) enclosed by metal shipping containers. “That’s where the fun’s going to be,” Thompson says. He envisions something similar to a European courtyard. 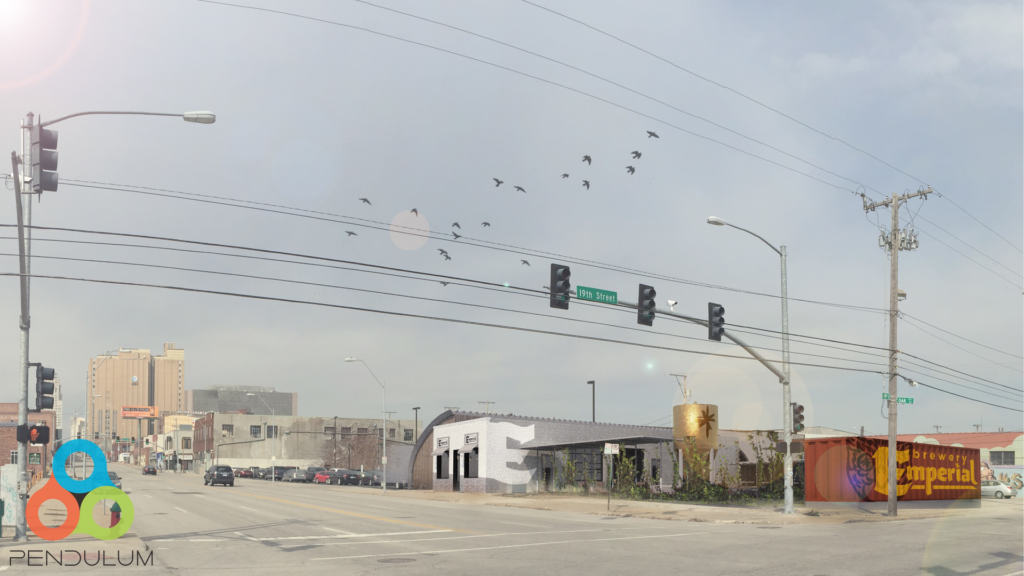 Thompson refers to the boomlet as “the brewmuda triangle.” He adds: “Now it’s a quad.” He likens the East Crossroads’ emergence as a craft-brewing zip code to industry growth in Denver and Portland, Oregon. But he says Emperial boasts a couple of significant distinctions from its neighbors: his more than two decades of brewing and Habiger’s cooking.

Habiger plans a casual menu centered on locally sourced meats and vegetables. He calls it “elevated pub food,” distinct from Room 39’s in part because of the wood-fired grill that he says will be a centerpiece of Emperial’s kitchen.

“When you walk in the front door, you’ll see the flames,” Habiger says. “We’ll be cooking off live oak the whole time, and hickory and apple and pecan and all of these different woods, and doing a lot of whole-animal butchering and some whole-animal cooking, in addition to a lot of great roasted veggies.

“Things like that are going to happen,” he adds. So are burgers.

“They’re not going to be those big, cooked-to-order burgers that we do at Room 39,” he says. “These will be more like thin patties, and doing singles, doubles or triples.” Habiger also has in mind “a big ol’ wood-fired steak,” poutine, a Scotch egg and brunch.

“We’ll do brunch on the weekends,” he says.

Beer will also be incorporated into the menu, particularly in soups and braised dishes.

Thompson and Habiger met in the mid-’90s, in server-training classes at 75th Street Brewery. Then their paths veered.

“I want him to be in the brewery, too,” Thompson says of Habiger. “Ultimately, the pairing is much better that he has the culinary skills because I have zero.”

Thompson and Kasyjanski helped open McCoy’s, but Kasyjanski left after he won a Missouri Lottery jackpot in 2001. Thompson happened to call Kasyjanski on the same day that his friend was retiring from teaching math at Wyandotte High School.

“This is something that I’ve always wanted to do,” Kasyjanski says. “This is someone who I have revered as a brewer and always been like, ‘What’s next? What are your brewing now?’ So I wanted to be a part of it.”

Coming out of Brewery Emperial taps, at first: four beers and a flexible rotation.

“I love lagers — Munich lagers, Vienna lagers,” Thompson says. “Some of those styles that you don’t see a lot of in the market will come out. You kind of have to do an IPA.”

Distribution isn’t in the works yet, but the partners hope to steadily branch out within the 435 loop and then into other parts of the region.

“We really want to get people in Kansas City behind us,” Habiger says. “There are going to be a dozen terrific breweries, and we want to be part of that mix.”