Brewery Emperial inches toward brewing and opening, plus new beers around town

If someone tells you that a new brewery is absolutely, definitely, without a doubt opening on a given date, you can probably make other plans that day. Nothing in this business goes according to plan. As the people behind Brewery Emperial, the brew-and-food project at 1829 Oak, can now remind you firsthand.

Saws are grinding in the brewhouse on the mid-June morning I meet co-owners Rich Kasyjanski and Keith Thompson (without their partner Ted Habiger, of Room 39, absent at this hour; Julie Thompson is here, plotting the decor). Plumbers and electrical workers labor throughout the building.

“It’ll probably take us two weeks to get the brewhouse set up, and then we’ll fire it up,” Kasyjanski says. “We hope to be four or five weeks away from brewing right now.”

“It could happen,” Thompson, the brewmaster, says wryly.

“I hate to put a timeline on anything, because of the way the rest of our timelines have been,” Kasyjanski says. “Yeah, it’s a moving target.”

For now, let’s just call it an autumn opening — “probably five or six weeks after we start brewing,” Kasyjanski says.

You can see that the owners have had no trouble filling their time in the 15 months since my last visit. Brewery Emperial, a graffiti-splashed shell of a building back then, now fairly gleams, with a silo towering over a shipping container out back. The brewhouse’s nerve center is a gleaming 24-foot-tall metal structure that looks like an airport hangar but is known as a quonset hut. It was Thompson’s idea to erect it themselves.

“There were times when I wanted to choke him while we were putting it up,” Kasyjanski says. “We did end up putting it up ourselves. I love the look of it. It’s kind of iconic already. It says, ‘We’re here.’ ” 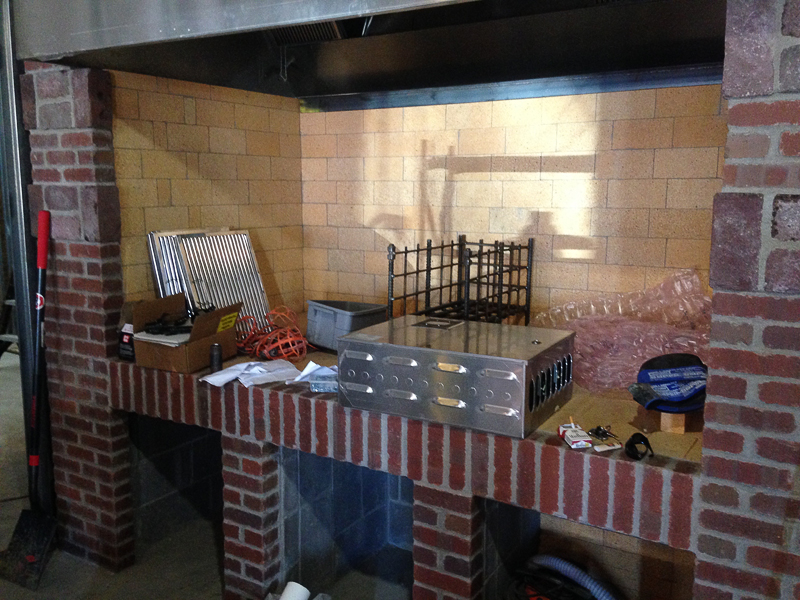 Kasyjanski gives an impromptu tour of the future restaurant space, stopping at the highlight: a wood-fired grill designed by Habiger.

“Now it’s a stage for us to put on a show,” Kasyjanski says. “While the beer is a big part of it, Ted’s food is, too. I’m so excited to get him using that.”

The dining room will seat about 70, but a spacious patio has room for 200 more people, in an area that will be closed off by shipping containers and fencing. Kasyjanski says the goal is to have a “dog-friendly, kid-friendly space.”

“Hey, I just thought of something,” Thompson says to Kasyjanski. “What if we had the garage door open out, so when it’s open, there’s an awning. You like that? No?”

Kasyjanski makes a skeptical face. “Let me think about it,” he says.

“We’ve had a lot of design discussions like that,” Kasyjanski tells me.

Twelve massive tanks are lined up in rows of six in what will become the cooler. Thompson will run a four-vessel, 15-barrel brewhouse with 30-barrel fermenters, all atop some impressive infrastructure. “We’re standing on the thickest slab of concrete since Pendergast, I think,” Thompson says. “Right?”

“Except for the city streets, as I understand it,” Kasyjanski answers.

“Or Brush Creek,” Thompson says. “Or the airport, perhaps. Yeah, we’ve driven some stuff across this, and it’s done its thing.”

Thompson isn’t ready to discuss which beers he’ll be brewing, beyond saying he aims to make “what is seasonally correct.” Kasyjanski says one will be a traditional, American-style lager.

“I don’t want to commit to a couple of styles with slick branding that are going to be our flagship, because it might not make sense,” Thompson says.

Kasyjanski walks out of the building toward 19th Street and Oak. He soaks in the view.

“Overall, this is really the vision,” Kasyjanski says. “It’s a nice dynamic. We still like each other. There’s been some times where we wanted to choke each other. We’ve cursed each other. But I think we’re better for it.

“I’m learning more about stuff that I never wanted to know,” he continues. “We’re opening a brewery and a restaurant, and I’m excited to get to that. But for now, we’re in construction. It’s like a weigh station. We have to get through this to get to the good stuff. Not that this hasn’t been fun. I have learned a lot, but I’m ready to start having beer.”

Big Rip fireworks
Big Rip’s annual Fourth of July party starts at 4 p.m. Independence Day. Don’t forget your lawn chairs, blankets and umbrellas, but you won’t need beer — Big Rip is providing for you. The brewery’s Josh Collins tells me that he hopes to have his Great Conjunction Cherry Hefe and Scotchlander Wee Heavy out just in time. The guys from Screenland will be showing The Sandlot after dark (pausing it once the fireworks begin). Want to know what beer you’ll try tomorrow? Ask the psychic who’s supposed to be here after 6 p.m. to read your fortune. Meanwhile, Hawg Jaw Que and Brew is selling food, and Gas Food Lodging plays music at 5. Two bucks cash gets you in.

Martin City’s Trolley Trail Ale out now
Martin City Brewing Co.’s tribute to a beloved stretch of park land — Trolley Trail Ale — is out now, a collaboration beer with the Well, Lew’s Grill & Bar and Charlie Hooper’s. You may have had it somewhere on the festival circuit; it’s been at Hopfest, Boulevardia and Westport. It’s a 5-percent ABV session IPA made with blood oranges and hops (Magnum, Cascade, Citra and Mosaic). It’s on tap now at those three bars as well as at the brewery. Also available at Martin City: City Saison, Kentucky Friar golden ale aged in bourbon barrels, Shunned House brett IPA and Purple Train blueberry lemon Berliner Weisse.

Amerisports’ Saison is on draft
The IPA at Amerisports Brew Pub (3200 North Ameristar Drive) ran out so early that the place is releasing its saison a little early. It’s on draft now.

Thursday 6.30
KC Hopps’ Beer Drinking Society convenes for a members-only sausage fest at 4:30 p.m. Members can partake in a free buffet of sausages, washed down with Deschutes. Get $3 pints of a randall of Chainbreaker IPA and specials on Black Butte Porter and Fresh Squeezed IPA.

Waldo Pizza’s (7433 Broadway) brewery of the month is Torn Label, and that means tappings of Alpha Pale Ale and House Brew.

Monday 7.4
Spend your day off at the Kaw-Boom Festival and drink some Free State beer in Lawrence from 4 to 11 p.m. Expect food trucks, music, fireworks and, of course, beer.