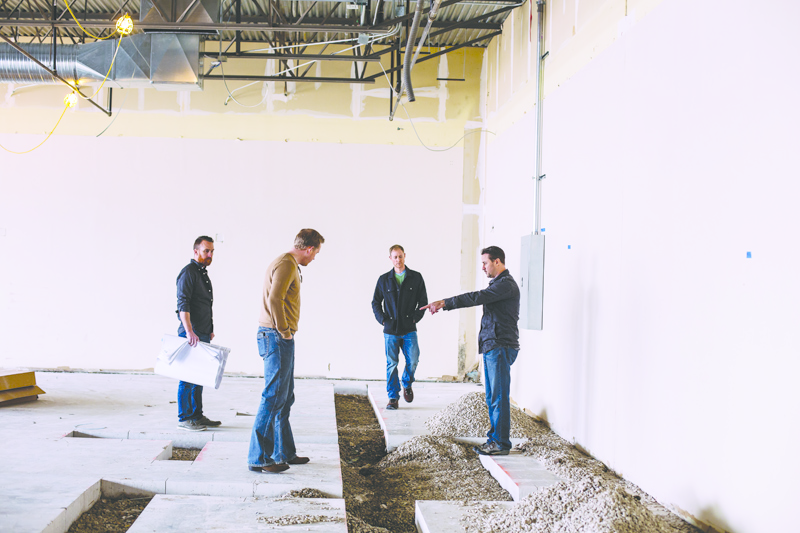 Update: Saturday’s Free State tour, described later in this post, has been canceled, thanks to the threat of icy weather.

After three years of helping would-be brewers learn how to make beer, Overland Park’s Brew Lab is getting ready to make a few brews of its own.

The successful brew-on-premises shop is moving into a larger space in February, with plans to add a taproom, a brewery and a kitchen.

“We want this to be a brewing playground,” Clay Johnston, Brew Lab’s chief marketing officer, says. “People will be able to drink our beer, watch others make beer, buy their grains and supplies, and make their own beer.”

Brew Lab’s lease at 8004 Foster ends on January 31. Johnston, along with co-founders Justin Waters, Kevin Combs and Matthew Hornung, saw this as an opportunity to expand on their original idea. While the partners had thought about franchising, a larger space nearby convinced them that Brew Lab could first get bigger in downtown Overland Park.

The plan is to open at 7935 Marty — a former drugstore space at the base of the Overland Park Farmer’s Market — next month.

Read the rest of this story at flatlandkc.org.

After nearly three decades at the Free State Brewing Company, head brewer Steve Bradt is moving on. Bradt this month is set to join Micro Matic, a company that distributes keg and draft equipment. Free State’s new head brewer is Geoff Deman, the longtime head of the company’s Downtown Brewing division. Deman has worked for Free State for 15 years.

Boulevard Brewing Company puts out a pair of releases this week. Early Riser Coffee Porter, a collaboration with Maps Coffee Roasters, and the company’s Irish Ale are both out on draught and in six-packs.

Sour fans, rejoice. Toolbox Brewing Company beers are now available on the Missouri side. The Vista, California, brewery also is working on a collaboration with Crane Brewing Company.

Tallgrass Brewing Co.’s King Buffalo should be out in four-packs of cans in the next week or so. The Imperial Stout, part of the Explorer Series, clocks in at 10.5 percent ABV, with big coffee and chocolate notes.

Mike’s Wine and Spirits (8447 Wornall Road) holds a tasting with Odell Brewing Company from 5 to 7 p.m. You can also find Odell brews at its Brookside location (21 West 63rd Street) from 4 to 6 p.m. Saturday.

Konza Swamp will be playing bluegrass at Stockyards Brewing Company (1600 Genessee Street, in the West Bottoms) from 8 to 11 p.m. Consider the Rye Porter a strong backbeat to the music; at 6.4 percent, with some spiciness, it should help warm you up.

Torn Label Brewing Company is having a big week. Fresh off its release of cans, it holds a second-anniversary party at its taproom, starting at noon. Expect to see all 12 taps going, including its first-ever double IPA. Gustucide is an impressive 9.6 percent ABV and is hop-loaded. Also on offer: a barrel-aged Old Believer in bottles, as well as a Mimosa-inspired variation of Alpha Pale. The Pie Hole food truck will be there to keep you fed.