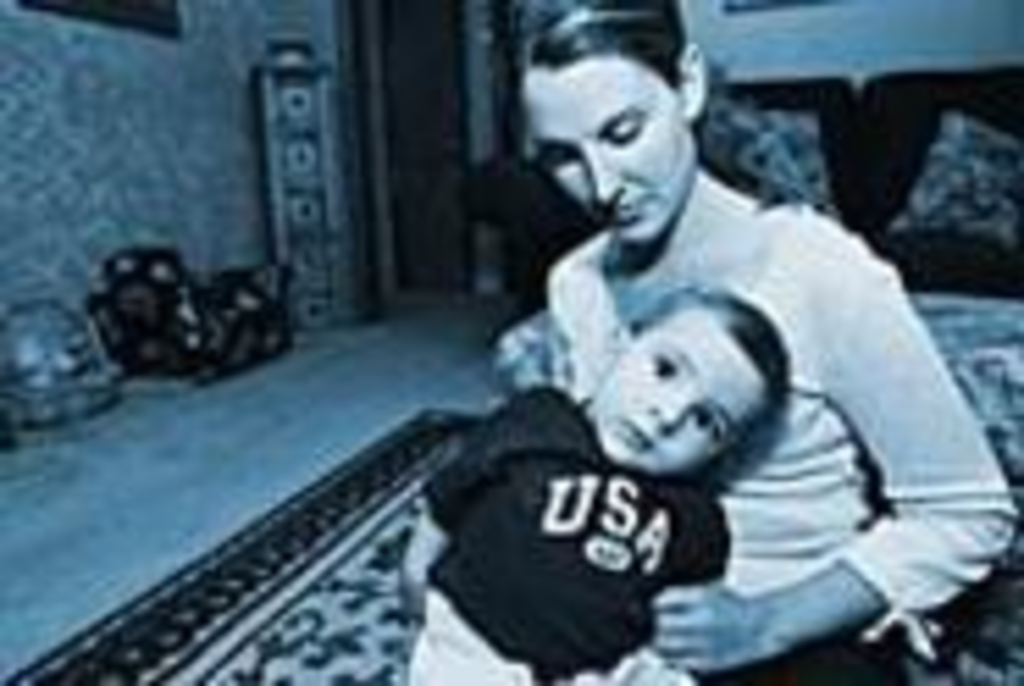 A rare medical condition has a young couple scrambling to give their toddler a normal life
Seven-year-old Ryen Hill has a normal sibling relationship with her brother, 20-month-old Brenden. As she throws a ball, he chases it down and brings it back to her. Flopping himself into her lap, he wrestles with her for a few minutes until his curious toddler attentions turn to something else in the room.

“Brenden stinks,” Ryen tells her parents. Suddenly aware that there are visitors, Ryen self-consciously runs to her room to grab a floppy hat to cover the haircut she gave herself the night before. Brenden takes the ball to his father, Rob, who smells the odor and swishes Brenden up for a diaper change. A huge grin spreads across Brenden’s face, as if he played a joke on everyone in the room. He bats his long, black eyelashes and holds his ball out. “Ba, ba,” he says as he’s whisked into his bedroom.

In so many ways, April and Rob Hill are an average twenty-something American couple raising a family. But underneath the normal, everyday activities is an underlying concern about Brenden’s health. He appears normal and is mentally developing at a normal rate for a child his age, but physically, he is much shorter than he should be.

April and Rob graduated from Bishop Ward High School in Kansas City, Kan., together. “We had Ryen young,” explains Rob. “We knew we wanted another child, but we waited awhile for Brenden.”

When April was pregnant with Brenden, they learned during an ultrasound that something might be wrong. “They saw an abnormality in the spine, but they did another ultrasound and thought that it may be an extra calcium deposit or something. They told us not to worry about it,” Rob says.

He adds that when Brenden was delivered by cesarean section, he could see immediately that something was wrong by the look on the doctor’s face. “The doctor said he was a lot shorter than they expected, and after they put him in the warmer and examined him, they told us that they were going to take him for x-rays and put him on oxygen.”

Doctors called in a specialist from Children’s Mercy, who told the Hills that Brenden’s spine was abnormal, his ribs were fused together, and his spine looked as if it had been crushed. “We didn’t even know if he was going to live for the first 24 hours,” April remembers. “But after 72 hours, they sent him home. We had a handful of referrals to other doctors, and Brenden was still on oxygen.”

For two months, the Hills saw genetic specialists, and finally a physician in California diagnosed Brenden with a genetic birth deformity called spondylothoracic dysplasia. The condition leads to a severe lack of growth in the spine and the rib cage. As a result, space is limited for the organs in this area, particularly the lungs, to develop and grow.

As in Brenden’s case, other than the torso region, the rest of the body for a child with this condition typically is normal in size. But growing normally presents a problem because as the body grows, it requires more oxygen to supply these parts. With the limited amount of space available for the lungs to develop, they will not be able to accommodate this demand.

Brenden is about 27 inches tall, which is about 6 inches shorter than a normal toddler his age, and he weighs only 17 pounds. “Brenden wears little jumpers so his pants and diapers won’t fall off of his short torso, and he wears 9-month-old (size) clothes,” says April. “His belly sticks way out, and when I used to bathe him, I would cry every time. I felt so bad for him. But now I am used to it.”

Brenden goes to Children’s Mercy Hospital twice a month, where he is monitored for weight gain and receives special vaccinations to help protect his lungs from infection. A few weeks ago, he developed a slight cough that turned into pneumonia within three days.

April worked until she had Brenden. “They didn’t tell us that we couldn’t take him to a day care, but it was bad enough we had one child coming home from school carrying all the infections that kids carry. We just didn’t want to take the chance with him,” she says.

The Hills live in a modest, middle-income home in Kansas City, Kan., close to Rob’s job at a feed and pet supply store. April’s desire to someday become an interior decorator is evident in the tastefully decorated home, where a sign on the door asks visitors to remove their shoes.

Rob’s job provides for the family needs, including health care, which has covered most of Brenden’s medical expenses. After Brenden was seen at Johns Hopkins Hospital in Maryland for a consultation, the Hills learned that there was a surgery for Brenden’s condition that had been FDA approved but was still considered experimental.

The Titanium Rib Project is being studied and performed at the Santa Rosa Children’s Hospital in San Antonio, Texas, by Dr. Robert Campbell. The surgery requires that the ribs be broken to have a titanium rod inserted into the ribs and chest, helping them expand to allow room for the growth of organs, especially the lungs. Every four to six months until the patient reaches age 16, the rod is adjusted for that growth.

The Hills were excited to learn about the surgery and its success. Although there are risks associated with any major surgery, the procedure provided the only hope for Brenden to live a normal, full life. But the health insurance company that covers the family, Coventry Health Care of Kansas, soon tempered the Hills’ excitement. The company has denied coverage for Brenden’s surgery.

Coventry refused a request for an interview for this article, but in a letter signed by Dr. Diana Cokingtin, medical director for Coventry, the company explains its decision:

“Coventry Health Care of Kansas empathizes with any family where a loved one is faced with a serious health situation such as this. However, Coventry has a responsibility to members of our health plans and their employers to provide all our members with affordable health care coverage. Like other health plans, we specifically exclude coverage for experimental treatments, except in very limited situations.

“After reviewing available data, Coventry has determined that there is no clinical evidence at this time that the titanium rib is an effective treatment of spondylothoracic dysplasia and, in accordance with Section 4.16 of Coventry’s technology assessment policy regarding experimental procedures, treatments, and supplies, denied the request for coverage. In fact, the sponsors of the Titanium Rib Project, the United States Food and Drug Administrative and Synthese Spine Co., referred to this project as an ‘investigational surgical procedure’ in literature recently.

“The member’s family has been informed of our appeal process and is free to exercise its right to initiate the appeals process. They are encouraged to request an expedited appeal if it is determined that the member faces a life-, limb-, function-threatening, or emergency condition.”

The Hills have been told that it is imperative that Brenden have the surgery as soon as possible, and they have filed their appeal. But it is unclear how many appeals Coventry allows or how long even the emergency appeal will take.

“There is already a waiting list for the surgery. One doctor in the entire country is only performing it at one hospital. If Brenden doesn’t have this surgery by the time he is 5, it will be too late, because that is when the lungs stop maturing,” Rob says.

Publicity about Brenden’s plight allowed the Hills to start a fund in Brenden’s name to help cover his medical expenses. “The cost of the evaluation for surgery is $8,500, and we have about $10,000 in the fund, so we have enough just for the evaluation and some travel expenses,” April says. (Contributions can be sent to The Brenden Hill Fund, attention Cathy Pachecco, Industrial State Bank, 32nd and Strong, Kansas City, KS 66106.)

They have also looked into the possibility of taking Brenden to the Shriner’s Hospital in St. Louis, and although the boy had been accepted into the program for evaluation of his spine, the Hills were unsure if the Shriners could help with the rib surgery because Campbell is not associated with the Shriners. “We had an appointment, but they called and said they had to reschedule,” April says. “With the waiting list, we decided not to wait and to go ahead with our appointment in Texas with Dr. Campbell this month.”

Kansas state Rep. Tom Burroughs met the Hills when their daughters started playing soccer together more than a year ago. “When I got to know them and found out about Brenden’s condition, I offered my assistance. They didn’t think it would be necessary, but now they have been through the system and time is becoming critical for Brenden,” Burroughs says.

Burroughs has contacted the state insurance commissioner on the Hills’ behalf and says he will do what he can for them. “This surgery is FDA approved, but it is experimental in this case because it has only been performed on one other child for this exact deformity. How many surgeries do they need to do before they aren’t considered experimental, and who can they do it on if it is a rare case like Brenden’s?” Burroughs asks.

Burroughs says the healthcare system in the United States needs some fundamental changes. “These people are just a very loving and caring couple that want the best opportunities in life for Brenden, with the best quality of life he can have,” he says.

“I told you not to do that,” Ryen says as Brenden takes one of her toys and starts to play with it. Her voice whines with the impatience of a 7-year-old sibling who was growing tired of playing with her baby brother.

“The other family who has a son like Brenden told us that they had to appeal to their insurance carrier three times before they finally agreed to the surgery,” April says.

Rob takes a piece of the puzzle Brenden offered him and scoops him into his arms. “I don’t want to bad-mouth our insurance company, but they need to understand that time is critical for him,” the young father says.