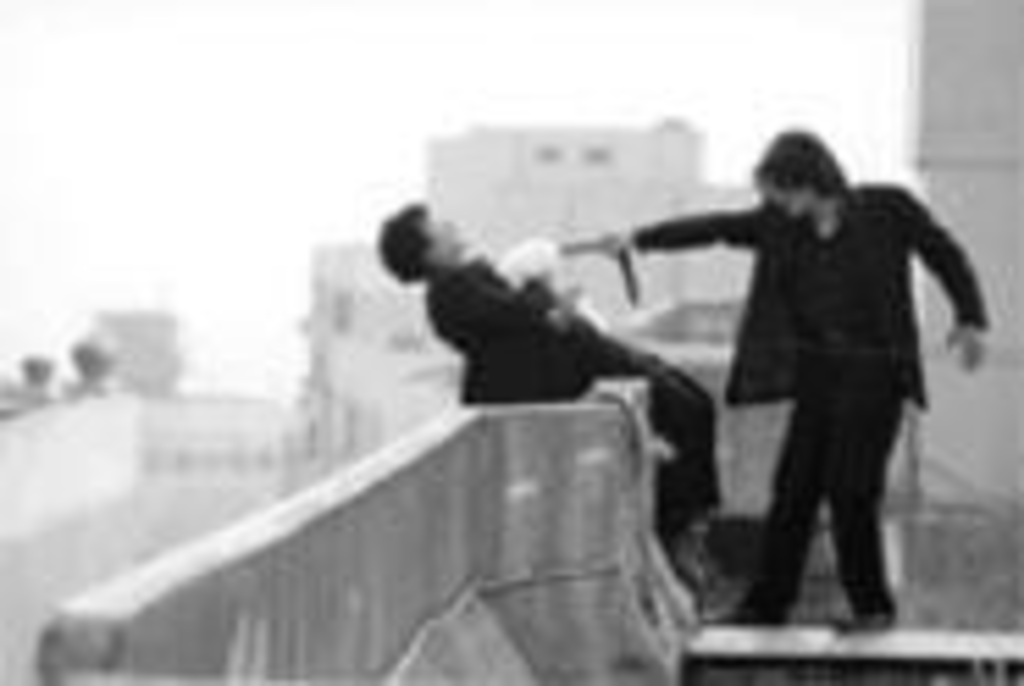 When was the last time you walked out of a theater feeling shell-shocked, like you’d seen something truly messed up? We’re talking the sort of messed-up stuff in which human beings devise insanely elaborate ways to be cruel to each other, the kind of psychological nastiness you not only wouldn’t wish on your worst enemy but probably aren’t twisted enough to conceive.

Oldboy is such a film. Don’t be deceived by its having won the top prize at Cannes; had Quentin Tarantino not been head of the jury, it would have had no chance. This is the kind of movie Tarantino has geekgasms over, the sort of thing he’ll undoubtedly crib from in years to come. It’s a work of art for sure, but a sadistic one. Oldboy is one of the year’s best, but it isn’t for everyone.

A drunken sad sack named Oh Dae-su (Choi Min-sik, star of the underrated Chihwaseon: Painted Fire) held at a police station repeatedly tries to urinate in the corner and shed clothing. His best friend shows up to bail him out, and they pause at a phone booth on the way home. The next moment, Dae-su has vanished.

He wakes up in a seedy motel room that would not feel out of place in Twin Peaks. Food is brought to him every day, but there is no window, only a television. He begs for an explanation of why he’s there, but his jailers give no answers. Dae-su tries to stave off insanity by teaching himself to box and by compiling a list of everyone who might hate him for the things he’s done wrong. Meanwhile, on the TV news, he sees that his wife has been murdered and that he’s the key suspect. When he eventually wakes up on the roof of the building inside a large trunk, wearing a brand-new set of clothes, 15 years have passed.

Now boasting a vicious, animalistic streak, Dae-su discovers that his boxing skills work well in the real world, but his social skills are lacking. Luckily for him, a sympathetic female sushi chef named Mido (Gang Hye-jung) takes him in and agrees to help him discover the identity of his captor.

Here we come to the first curveball thrown by director and co-writer Chanwook Park (Sympathy for Mr. Vengeance). It doesn’t take long to find the culprit — a slick, spoiled-looking rich youth named Lee Woo-jin (Yoo Ji-tae). But there is a catch: If Dae-su kills him, he’ll never know the motive behind his imprisonment. Ah, but Dae-su can use torture to extract the answer, right? Not so fast. Woo-jin has a delicate heart with a pacemaker and a remote control that can stop his heartbeat at any time. If he is tortured, he’ll kill himself. Woo-jin offers a compromise: If Dae-su learns his motives by July 5, he’ll off himself. If not, he’ll kill Mido.

If Dae-su were smart, he’d take out Woo-jin first, then figure out the motive. But the killing would hardly be as satisfying under those circumstances, so he instead goes on a quest for the truth, which — much like the truth at the center of Alan Parker’s Angel Heart — is one he’ll later wish he hadn’t discovered. Park, having gotten our attention with a standard revenge-story setup, then proceeds to subvert it.

There’s much darkness at the heart of Oldboy but also scenes that will make you cheer — including a set piece involving Dae-su, a throng of thugs and a hammer. There’s also a fantasy-tinged sequence in which Mido explains why lonely people always have hallucinations of ants.

A couple of lapses in logic are a little too conspicuous, and Woo-jin’s master plan, much like the one in David Fincher’s The Game, requires that he be able to predict exactly what Dae-su will do in every circumstance. But Park’s skill helps to gloss over these flaws, and the power of some of his disturbing images is such that you won’t be nitpicking, at least not right away. You’ll be too busy trembling.