Boulevardia kicks off the weekend with great brews and bands 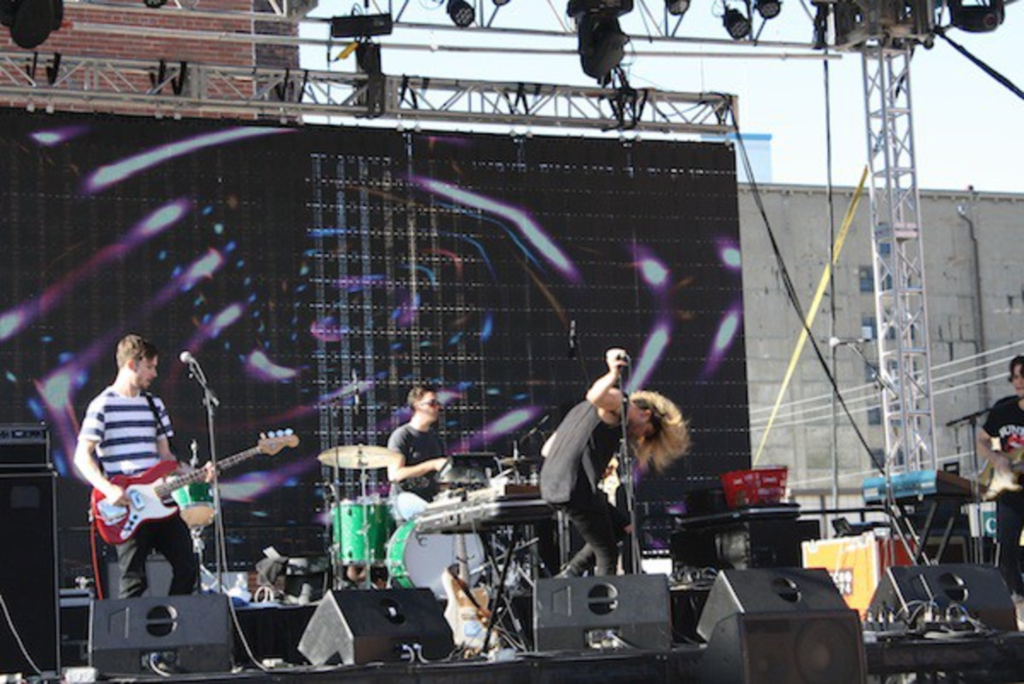 The West Bottoms is housing a new nation for the weekend. In the country of Boulevardia, orange tokens are the currency and beer is the language. Its constitution is founded on the values of life, liberty and the pursuit of aged wheat juice. Its newly naturalized citizens gathered for the first parliamentary session last night for a evening of special taps and live music.
David George and a Crooked Mile opened Boulevardia’s first day with straight country crooning. The sweet blend of cello, mandolin and three-part harmonies paired well with Boulevard’s Ginger-Lemon Radler. A dulcet tap for a dulcet group, the refreshing citrus notes and gingery bite served as a perfect companion for the bluesy quintet.

Any GTA gamer would immediately recognize Chain Gang of 1974 as the band on V’s radio and official soundtrack. Sadly, the indie-pop project of veteran 3OH!3 bassist Kamtin Mohanger fell a bit flat on the main stage. Maybe it was the time slot or the simple fact that what Mohanger was working with couldn’t convey the sound he was going for; a later review of Chain Gang’s recorded material yields music I wish I had heard played live. Pair with the Pop Up IPA for effort. 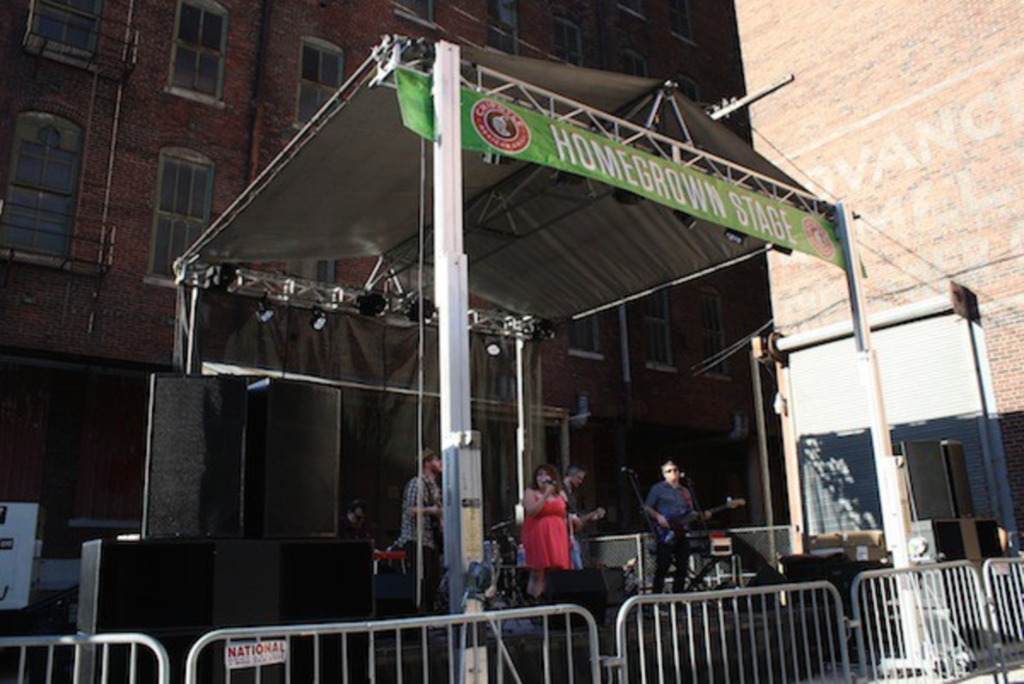 The Grisly Hand brought country folk to the Chipotle Homegrown stage with a sound best embodied in the Tank 7 Farmhouse Ale. A nose strong in grapefruit and pepper with banana, caramel and vanilla undertones, this beer smells like the farmhouse it’s trying to channel. And in this farmhouse is the Grisly Hand, strumming rustic banjo notes, singing about lost love. 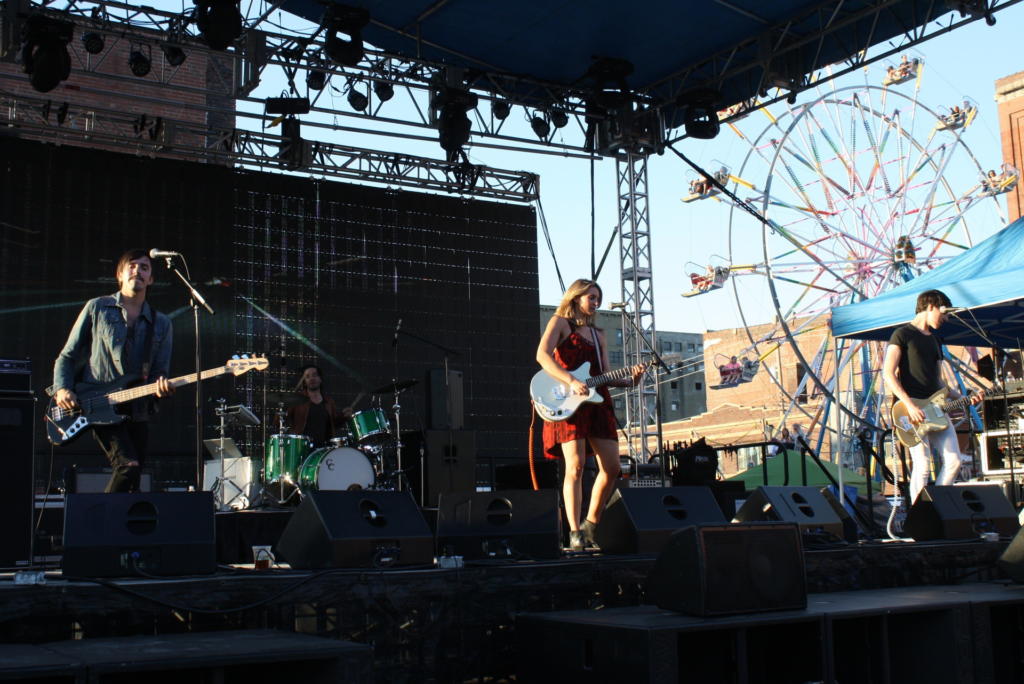 With subtle bossa nova influences, the indie-pop brother-sister collaboration of Blondfire brought the West coast summer lifestyle to the main stage. Mainly, it seemed, they were just happy that the sun was shining. The group’s sugary, superficially philosophical set paired well with the equally lightweight Ommegang Witte from Ommegang Brewery. Spice blended with citrus fruit that’s enjoyable standing alone, but not the the brew to pick to introduce someone to the witbier genre. 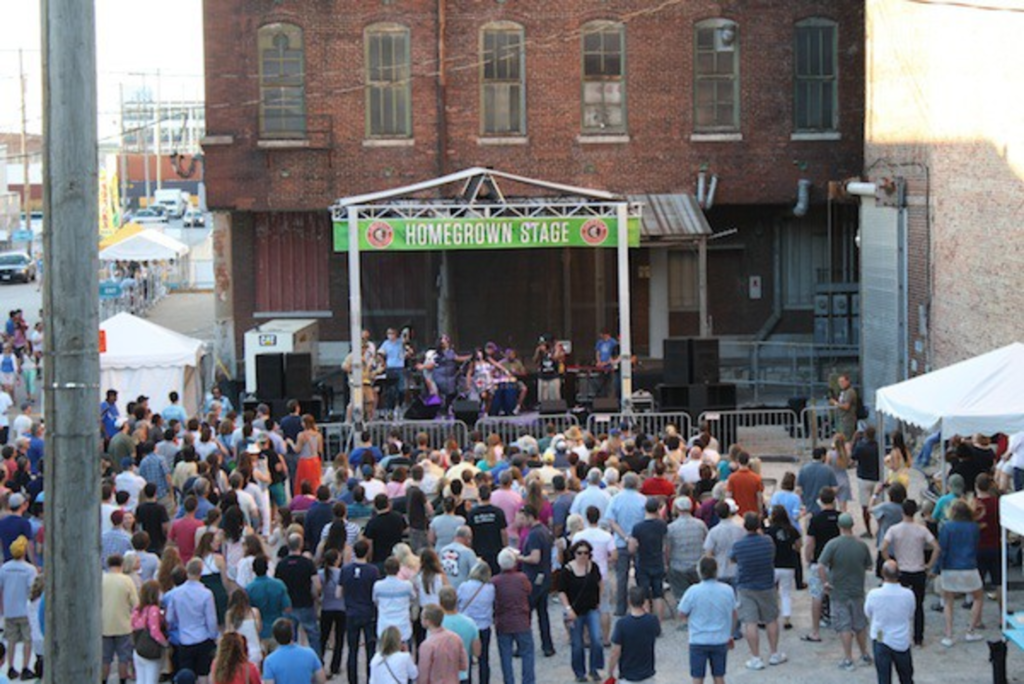 Hearts of Darkness infused some much needed energy into Boulevardia with their infectious blend of big band brass, hand drumming, tropical vocals and Motown support singing. The thirteen-piece group danced with the oldtime beat on the Chipotle Homegrown Stage beautifully. Flavor-wise, Celebration – Boulevard’s special tap for Boulevardia – could not keep pace with the afrobeat, the essence of the two pair well. 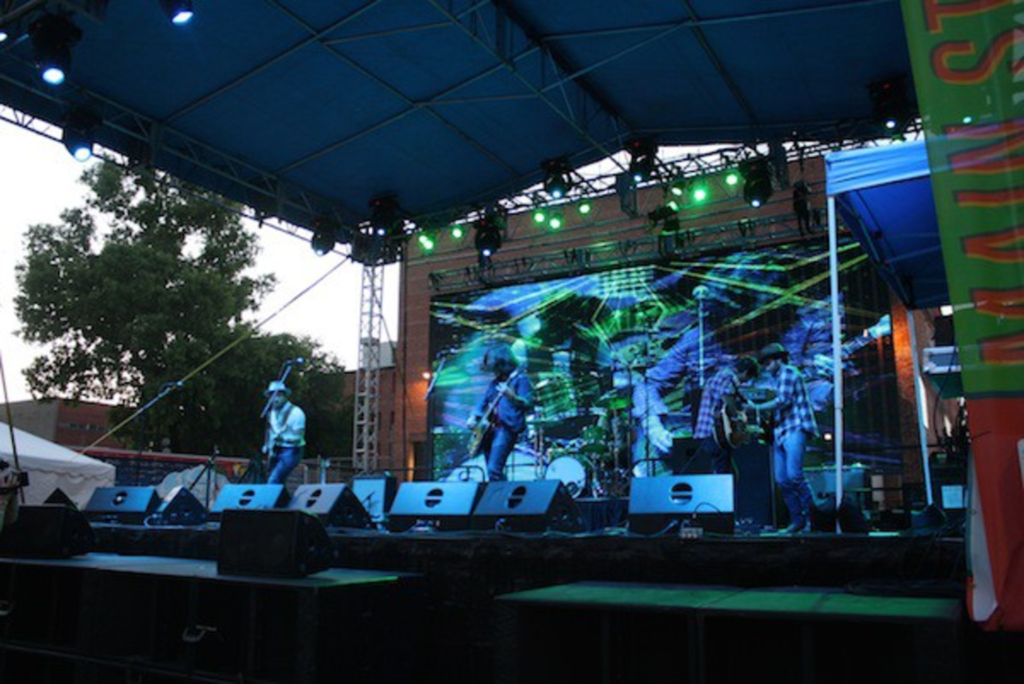 The Wild Feathers neither disappointed nor excited. They came, they played unnoticed generic rock and roll of their creation, and closed with a few covers that the festival knew the words to. Pair them with the Boulevard Boss Toms – a crowd-pleasing traditional. 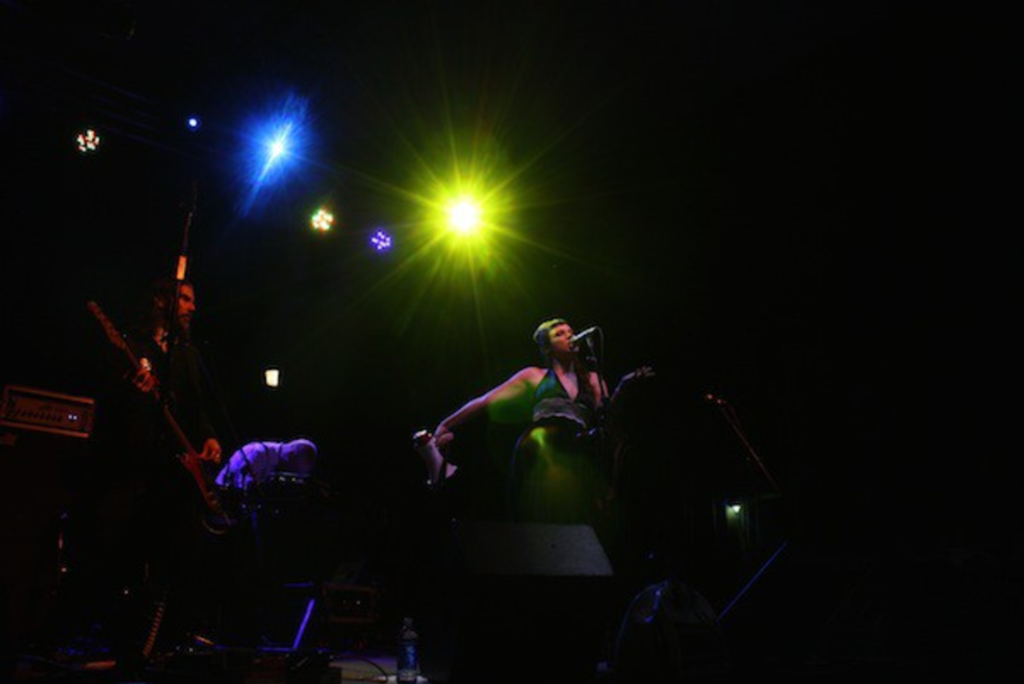 The Latenight Callers were “much obliged” to seduce the crowd at the Chipotle stage with a politesse not seen since the Pendergast days. Slinky cabaret vocals turned metallic by means of a megaphone met a vampish bass met synth in an incredibly compelling combination. The tipsy Boulevardians (who were previously toasting to their citizenship to the grand state of Boulevardia) abandoned themselves to this amazingly strange new take on noir. The only beer dark enough to pair with the Latenight Callers was the Ivan The Terrible Imperial Stout from Big Sky Brewing Company. A black beer with a strong nose of bourbon and molasses, it’s anything but sweet. Like The Latenight Callers, you can taste the barrel it was aged in. 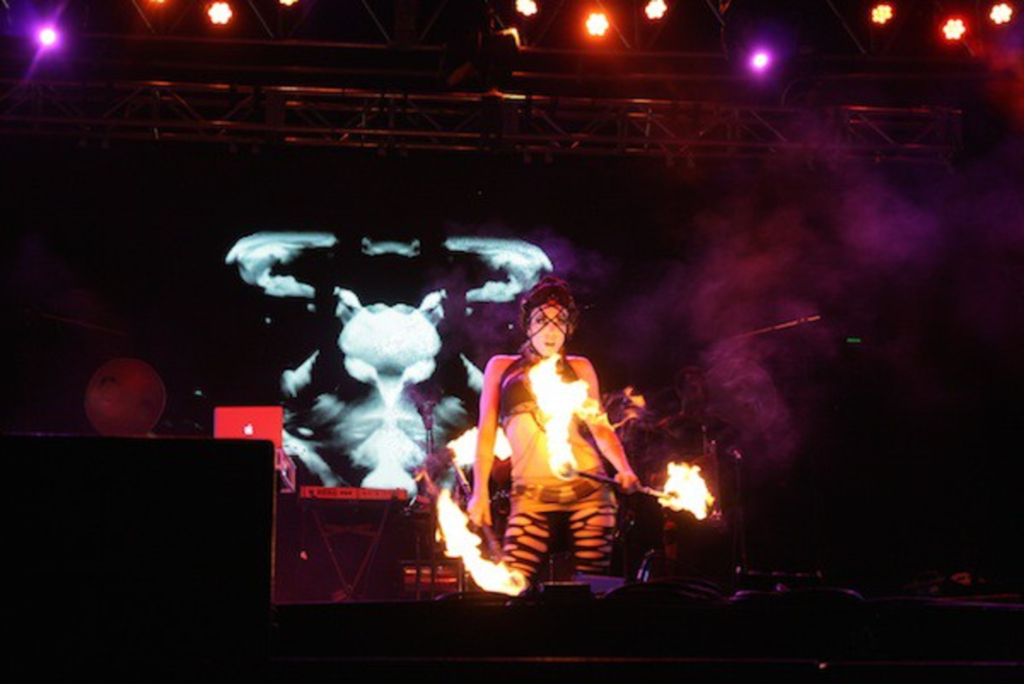 Quixotic Fusion took the stage as the full moon rose over the warehouses of the West Bottoms. The crowd pressed closer as sultry electronic music played over the speakers. An electric violin pierced the night with stirring notes while being accompanied by galvanic hand drumming and counterbalanced by a richly resonant trumpet. The trio blended disparate sounds to create, well, a fusion that in and of itself was transcendent. And that was before the dancers took the stage. An exotic baton-twirling belly dancer exuded fierce suppleness while she whipped burning batons around her body. Gorgeous nymph-like dancers glided shimmering fabric across the stage to the pulsing beat of the live musical accompaniment. A creature on stilts screamed in ecstasy as he performed unbelievable stunts with burning nunchucks.

Quixotic mastered the element of fire last night with one act after the other increasing with incandescent intensity until two men were slashing fire sticks aflame with dazzlingly white sparks mere inches from each other – except one was upside down in a handstand. The finale was – besides fiery – a masterful amalgam of modern dance, acrobatic pole, circus, and visually stunning graphics. Quixotic Fusion can only be compared to one other dance ensemble in the world – Cirque du Soleil. Kansas City should count itself lucky to house such an intensely creative group of people capable of such flawless execution of such fantastic concepts.