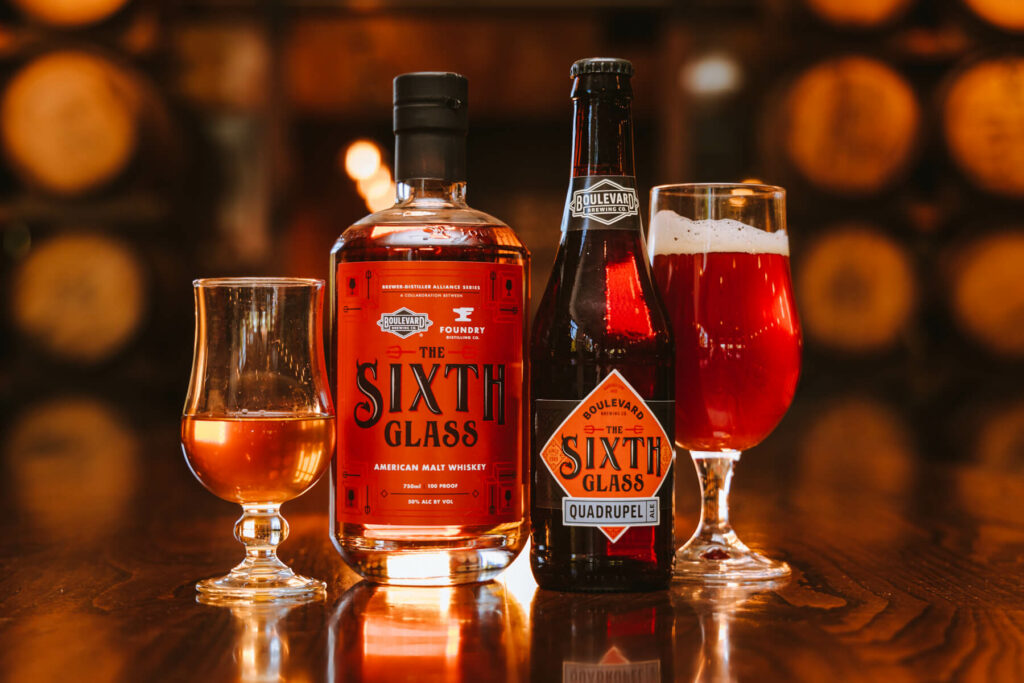 Boulevard Brewing Company and The Foundry Distilling Co. are eager to announce their second collaboration, following their successful teaming up on Midnight Ritual.

As Boulevard evolves into what one might consider the Willy Wonka of beer, The Foundry Distilling Co. is noticing Kansas City’s receptivity. On Tuesday, Sept. 6, The Foundry will release its Sixth Glass American Whiskey, a distilled adaptation of Boulevard’s Sixth Glass Belgian-style quadrupel ale.

“The final version of The Sixth Glass whiskey is bold at 100 proof, softened by the pronounced candy flavor and aroma which came from The Sixth Glass wort (unfermented beer base) used in its creation,” says Scott Bush, owner of The Foundry Distilling Co.

Better yet, the label suggests a hint of sacrilegious activity. Take note of the devil horns on The Sixth Glass “S,” and then consider that Catholic monks of medieval times were some of the first to perfect Belgian quadrupel-style ales.

Boulevard will host a release party on Friday, Sept. 9. The evening will begin with an hour-long Q&A reserved for clients with enough forethought to pre-order whiskey through Boulevard.

The general public is welcome to join from 6-8 p.m. to try a Sixth Glass whiskey cocktail, side-by-side pours of The Sixth Glass beer and whiskey, as well as a “pig & fig” flatbread. DJ Skeme will accompany with beats from 5-7 p.m.

Preorders for The Sixth Glass American Malt Whiskey are available now through the Boulevard Gift Shop.