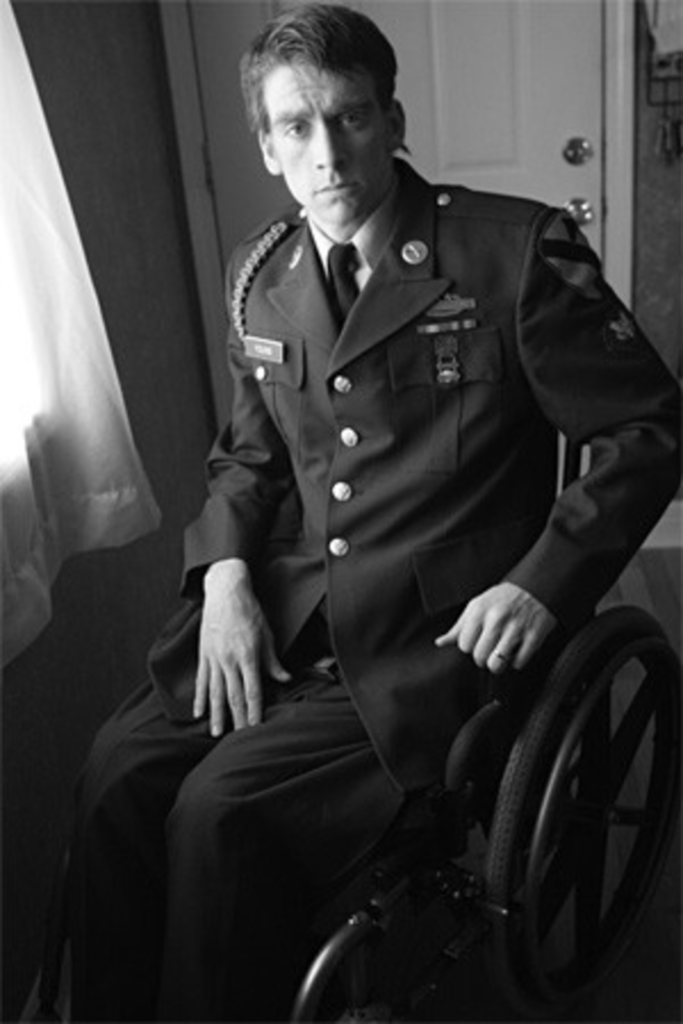 Tomas Young breezes through the halls of the Rehabilitation Institute wearing a leather jacket and commanding his wheelchair like a competitive cyclist. A bottle of fluorescent green Gatorade goes flying as he enters an exercise room populated by stroke patients wearing sweat pants, but Young dips and recovers it, barely breaking momentum.

The 28-year-old Iraq-war veteran is here, a few minutes late, to order a new wheelchair. His upgrade will be like going from a high-end Ford to an Aston Martin. It’s a fitting change for a guy who’s about to become a hard-earned movie star.

The wisecracking Kansas City native has had this black-and-teal wheelchair since he returned from Iraq in 2004 with a bullet hole beneath his left collar bone and a body paralyzed from the chest down. The Department of Veterans Affairs gave him two chairs, but he cannibalized one for parts. As a tireless anti-war activist, he has put in plenty of miles on the dusty fields of Crawford, Texas, and in the shiny hallways of the U.S. Capitol.

The request for a new wheelchair has been mired in the endless bureaucracy of the VA for more than seven months. By now, Young has become accustomed to the snail’s pace of the agency. “Story of my life,” he says sarcastically. After nearly a year without results, though, his request suddenly shot up to priority level — the same month as the debut of his new documentary, Body of War.

His name may have been lost in the shuffle, but Young isn’t the typical war vet. He has become the public face of a growing number of soldiers who feel betrayed by their country and alienated from the system that’s supposed to help them when they get home from war.

Body of War will go national in April, but the movie’s U.S. premiere is at Tivoli Cinemas Friday, which marks the fifth anniversary of the war in Iraq and nearly four years since Young was gunned down on the streets of Sadr City. But this veteran’s fight is ongoing. For the past three years, Young opened up every aspect of his life to producer Ellen Spiro and Phil Donahue, the co-director and financier, for a jarring, intimate documentary.

If you ask Young, Body of War is a counter-recruitment tool. He knows that the audience might cringe at the graphic details of his disability: the fact that his wife had to worry about her then-fiancé’s inability to control his bowels on their wedding day; the unglamorous penis pump that Young experimented with to get it up in the bedroom, despite the fact that it irritated his skin. But shock and awe is exactly the point.

“Everyone joins the military knowing that they may die,” Young says. “But no 18- to 21-year-old young man joins the military thinking that, in order to get an erection, they’re going to have to inject something into their penis. No 18- to 21-year-old kid is honestly thinking his mom may have to give him a catheter. And, yeah, those things are deep, intimate moments in my life. But I want kids to realize that, if they get shot and paralyzed, these will be deep, intimate moments in their lives.”

Young joined the Army two days after the World Trade Center fell, but he quickly grew disillusioned when he was shipped to Iraq instead of Afghanistan. On his fifth day in Baghdad, he was sent out in an unarmored, open-top vehicle. A sniper easily picked him off. The bullet pierced his spine, and as his flak jacket filled with blood, the feeling drained from his body.

Young met Donahue while he recuperated in a hospital bed in Washington, D.C. The soldier spent only a few months in the hospital when he got home — a short stay by any medical standard for such a severe injury.

On a recent Wednesday, he’s at the Rehab Institute, he says, so he can be strong enough to fight for better care from the VA and to put an end to a war he calls “asinine.” Because nobody worked with him on balance, he has spent years slouched to the side, leaning on the arms of his wheelchair. That posture has left him with nerve pain in his elbows and the threat of scoliosis in his back. Worse are the involuntary spasms in his muscles. Often, when he wakes up in the morning, his left leg is jammed between the bed and his wheelchair; his right is splayed to the side like the letter L.

Some days, when his body is particularly mutinous, Young says it’s easy to feel despondent. His self-described gallows humor and an increasingly frantic touring schedule to promote the movie have kept him from going mad with self-pity.

Outside the Rehab Institute, the back of Young’s van is plastered with anti-war bumper stickers, including one with the Molly Ivins quote “It’s hard to convince people you’re killing them for their own good.” But before he leaves — to get ready for a flight to New York City and an interview with Billboard magazine (Eddie Vedder has contributed a new song to the soundtrack, due out March 18) — he has to decide what color his new, sports-car-caliber wheelchair will be.

“I want dark blue,” he says, “like the color on the map for a state that votes Democ­rat.”