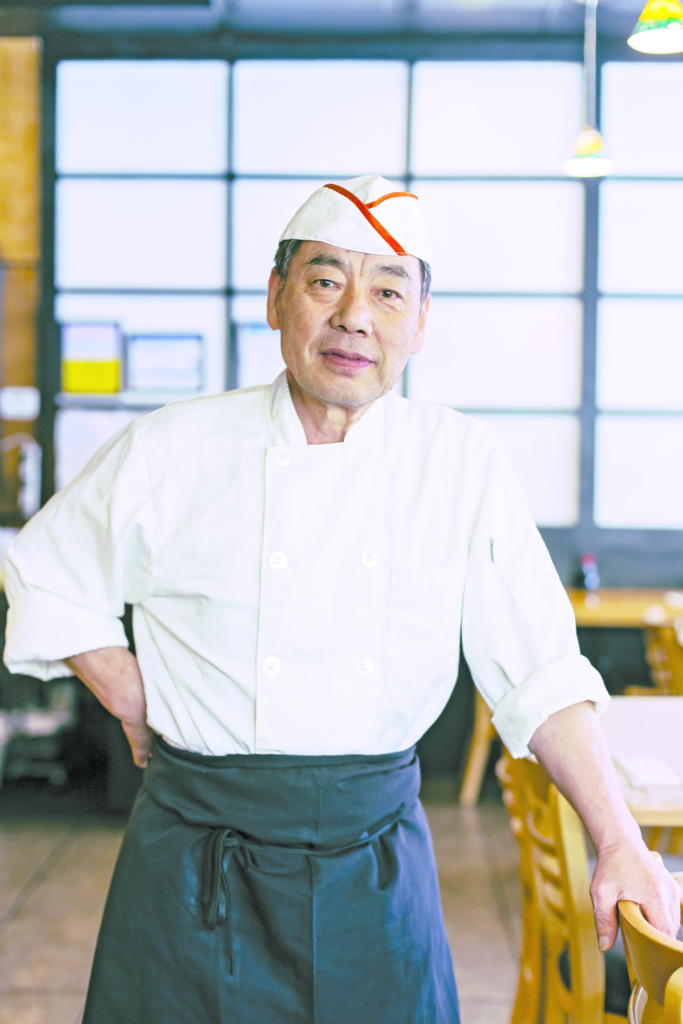 Kansas Citians can rightly claim themselves citizens of a serious food-and-beverage town. Beyond the usual discussion about barbecue, past mention of the bartenders and baristas and chefs who have scored accolades and competition hardware, when you talk about KC food, you talk about options. Tell someone you love a sandwich in Brookside, and she’ll answer with a convincing story about her favorite ramen. It’s getting hard to narrow down just where to lay down your meal money when you’re hungry. Trust us — we’re hungry, and we talk about food a lot.

So we took an informal office poll and assembled a list of our favorite dishes available in the city right now. We like most of the menus at most of these places, but if we had to narrow our choices to just one apiece … Well, we didn’t have to, but we did. Here they are. 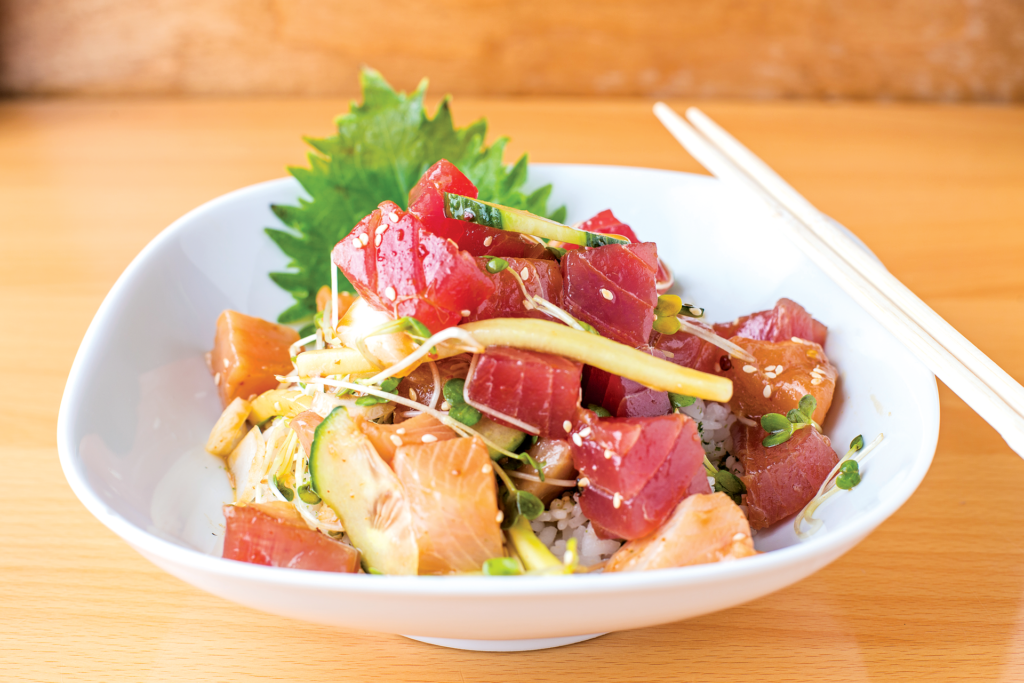 When renowned sushi chef Bob Shin and his family relocated to Kansas City to open Bob Wasabi, they wanted to introduce the city to poke, a Hawaiian dish featuring hunks of fresh, raw tuna (poke in fact means “to slice”), served with fresh vegetables and bathed in a light, soy-based dressing. They didn’t know that their timing would turn out to be perfect: A poke trend was starting to spread across the country. To Shin, this was simply a dish he had come to love while living on Maui, where he ran one of the many restaurants he has been involved with during his long career.

Shin serves his poke bowl with generous portions of ultra-fresh tuna and radish sprouts drizzled with a sesame-oil-and-soy dressing, served over perfectly cooked rice with sesame seeds sprinkled on top. Shin will tell you that the key is the quality of the fish, and he prides himself on sourcing the freshest in the city. He’s right.

For those who like spice, Shin’s spicy fish bowl, heh duhp bap (similar to Korean bibimbap), is the poke dish for you. Here, the rice and sashimi (tuna and octopus, typically) are topped with crunchy, fresh cucumber, a sauce centered on gochujang (the addictive Korean chile paste used as a condiment) and a dollop of bright-orange roe. Yes, yes, that’s two dishes, but there’s almost no deciding at Bob Wasabi, which is why Shin is on our cover this month. (A.F.) 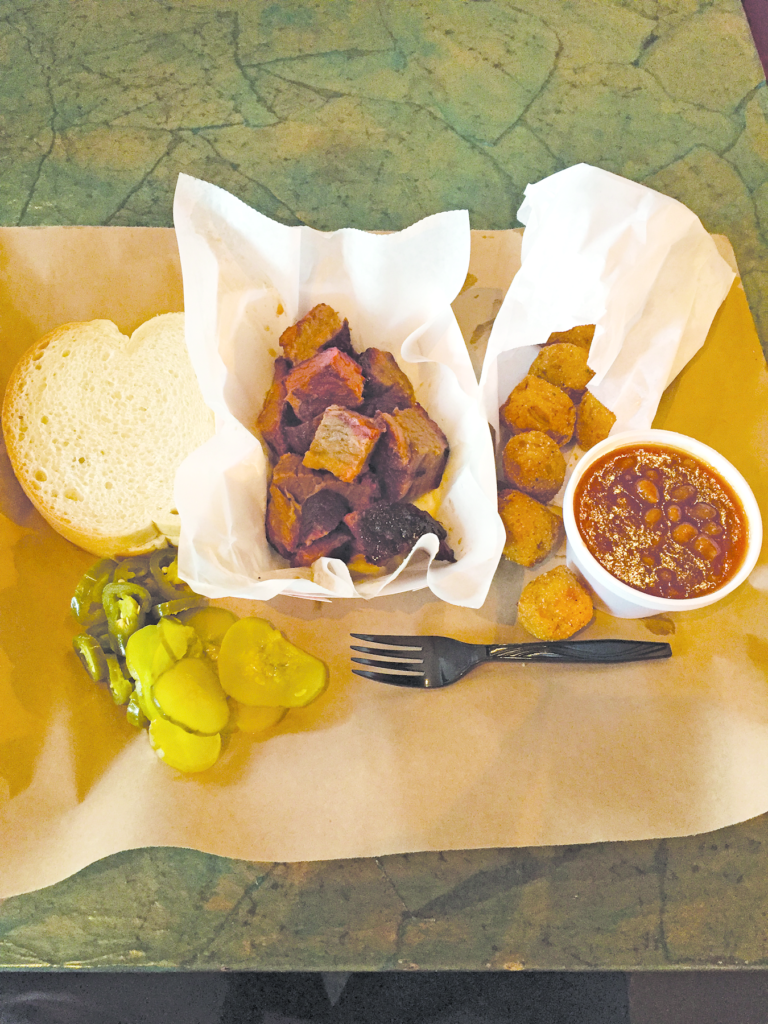 A couple of San Franciscans rolled up to the counter at Slap’s, in Kansas City, Kansas, the other day. The Giants were in town for a two-game series against the Royals, and these fans were decked out in orange-and-black jerseys. “What’s the most popular thing on the menu?” they asked the man taking their order. “The burnt ends and the ribs are at the top of the food chain here,” he responded. We tend to agree: Our go-to at Slap’s is the burnt ends, gooey and juicy and tender enough to make you feel like you’re eating something illegal. The burnt-end sandwich is wonderful — it’s called the End Is Near — but we’re not going to pass up the burnt-end plate, which comes stacked with sliced white bread, pickles and jalapenos, and your choice of two sides (cheesy corn and baked beans, please). It comes to about $15, but it’s good for leftovers if you can muster a modicum of self-control. On our way out the door, we noticed the Giants fans seated at a picnic table near the entrance. We were going to ask them what they thought about Slap’s, but their mouths were too crammed full of burnt ends to answer. We settled on “Go Royals” and made our way to the car. (D.H.) 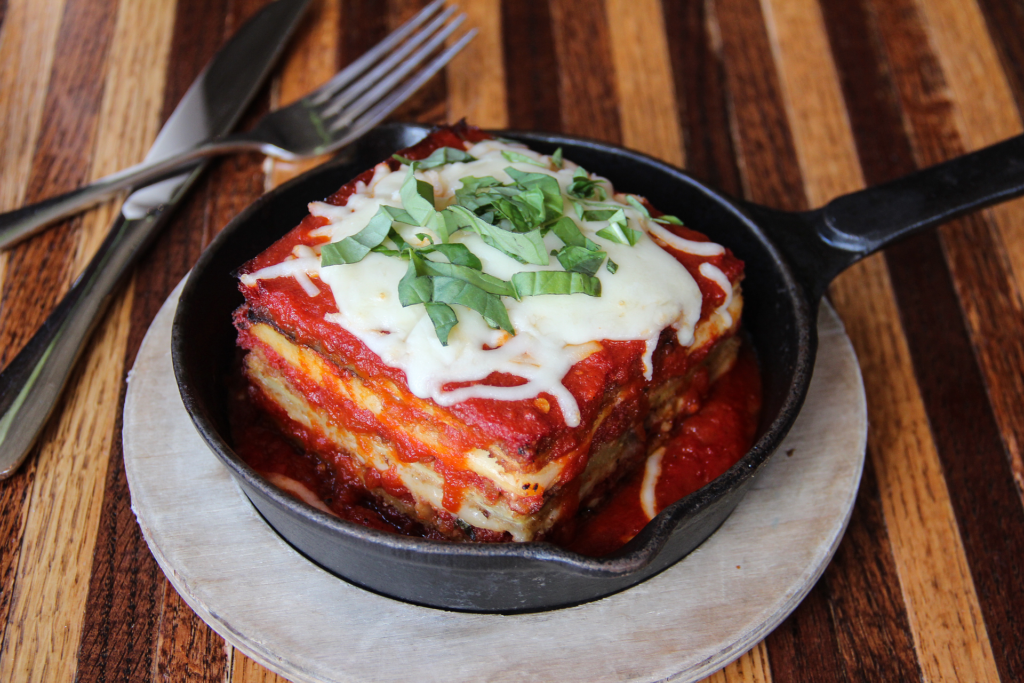 Laura Norris first made the eggplant parmesan that she serves at Ragazza when she was in high school, working from her mother’s recipe. Norris has worked with and refined the dish ever since; it was a neighborhood favorite at Christmas parties for many years before she opened her Westport restaurant, and it is one of Ragazza’s most popular and enduring dishes.

Norris’ parm starts with pan-fried, house-made breadcrumbs in oil and garlic; they will coat the slices of eggplant. The dredged and breaded eggplant is then fried to crispness and layered with Ragazza’s tangy house red sauce (thickened with extra tomato paste) and then mozzarella. And not just a few layers — Norris’ dish is stacked so tall that it’s easy to confuse with lasagna. The dish can be messy if not made in large batches, so Norris’ staff cooks up large pans of the eggplant parm and then cuts generous individual portions to serve, bubbling hot, in small cast-iron pans, one diner at a time.

The dish is decadent and cheesy, the eggplant almost meaty, but the bright acidity of the tomato sauce keeps it from feeling heavy. You don’t think you’ll eat the entire portion, until you’re staring at the bottom of the dish. (A.F.) 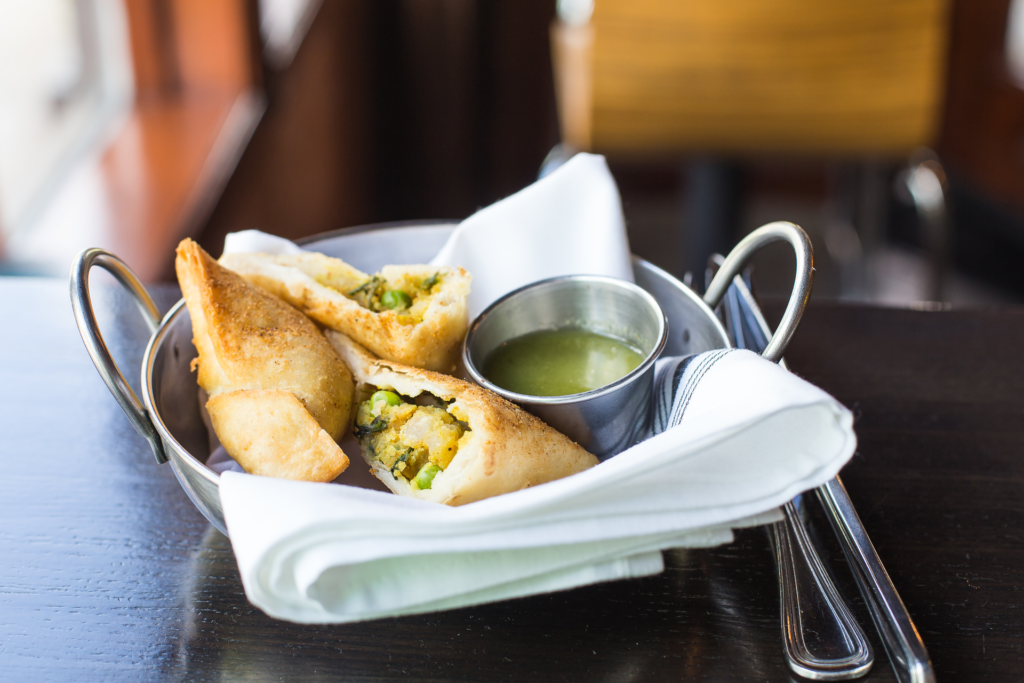 To our mind, samosas are in the holy company of pizza and sex: Even when they’re bad, they’re still pretty good. At Chai Shai, though, that belief system is moot, because the samosas are never, ever bad; they’re the best in town, and they have been since the day this Indian-Pakistani joint opened on a quiet Brookside corner seven years ago. What’s Chai Shai’s secret? Less breading, for one. Some places deep-fry their samosas into oblivion, but Chai Shai’s arrive delicate and flaky, with just a thin layer of fried dough between your face and the potato-y goodness inside. We’re not vegetarians, but we favor the veggie samosas. (The ones with chicken and beef are good, too.) They come with a coriander-and-green-chili dipping sauce, but we ask for the red chutney sauce, which is sweeter. Resist the urge to split an order with your companion. You’ll want both. (D.H.) 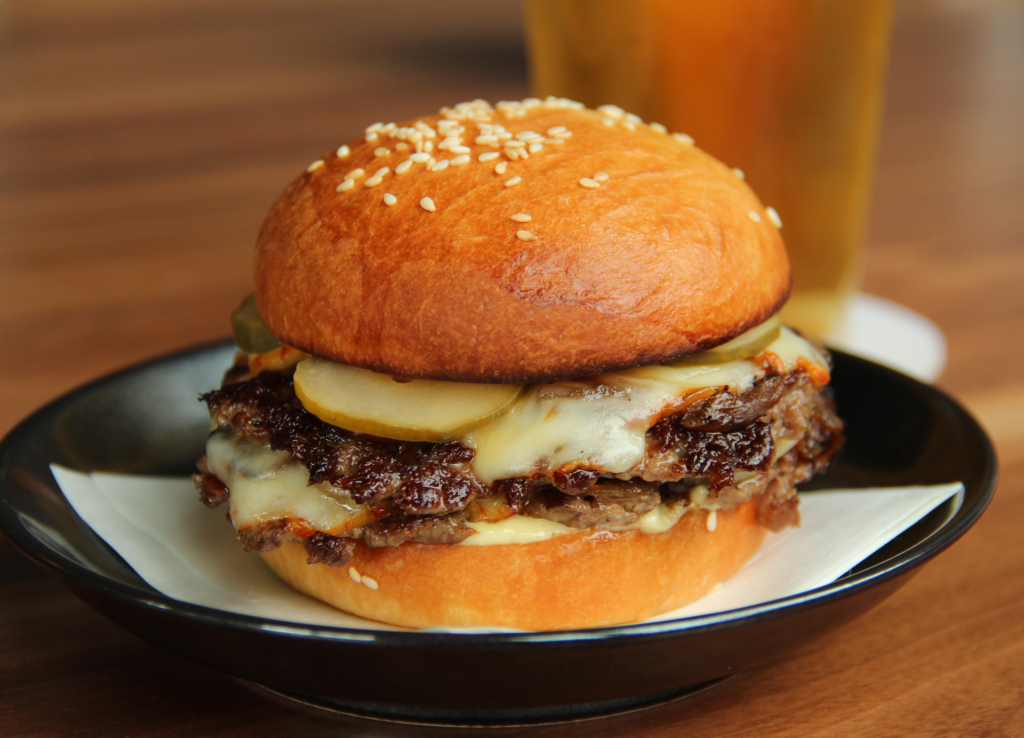 Chef Michael Corvino is known for his artful, modern approach to food, but he also knows how to please a hungry, late-night (largely service-industry) crowd. His after-10 p.m. menu includes Korean-style fried chicken, crispy pork ribs, and egg sandwiches served with white-sturgeon caviar (a touch of fancy had to come somewhere). But it’s the $8, diner-inspired cheeseburger that will change your life. Corvino cooks two thin patties of house-ground beef chuck on a French plancha, a type of flat-top grill that delivers a perfect, umami-embedding sear. He then adds house-made super-sour dill pickles, caramelized onions, aioli and Muenster cheese (which delivers the meltiness of American without the processing baggage). The bun (also made on site) echoes a Parker House roll. The result is a gooey, juicy burger that goes great with a cold Hamm’s. To eat one is to immediately contemplate ordering another. (A.F.) 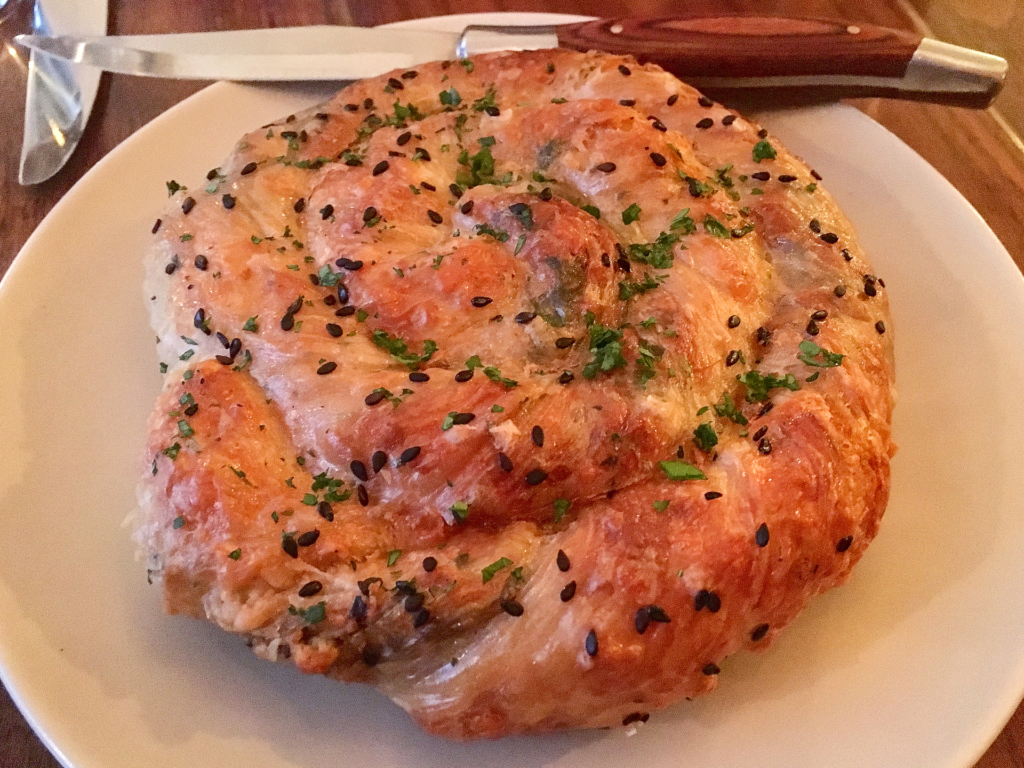 You could describe the Antler Room’s vertuta simply as the cheesy bread of your dreams, but that captures only one simple part of how savory and delicious the dish is, without any reverence for its elegance or the process behind its creation. Originally developed by sous chef Andrew Heimburger as a staff meal, the vertuta was so good that it made its way onto the menu — one of the only items on the Antler Room’s revolving list to be regularly featured.

Vertuta, as Heimburger explains, is a traditional Moldovan savory pastry that’s typically made with the dry Slovak cheese syr; at the Antler Room, though, it’s been reimagined with cheddar and parmesan. Heimburger stretches strudel dough over a large prep table until it is paper-thin, then brushes it with garlic- and shallot-clarified butter, cheddar and parmesan, and a Georgian condiment called phkali — the Antler Room’s version of which contains charred eggplant, swiss chard, walnuts, garlic and fenugreek. The dough is then folded and twisted into a spiral, and the resulting food is addiction on a plate. (A.F.) 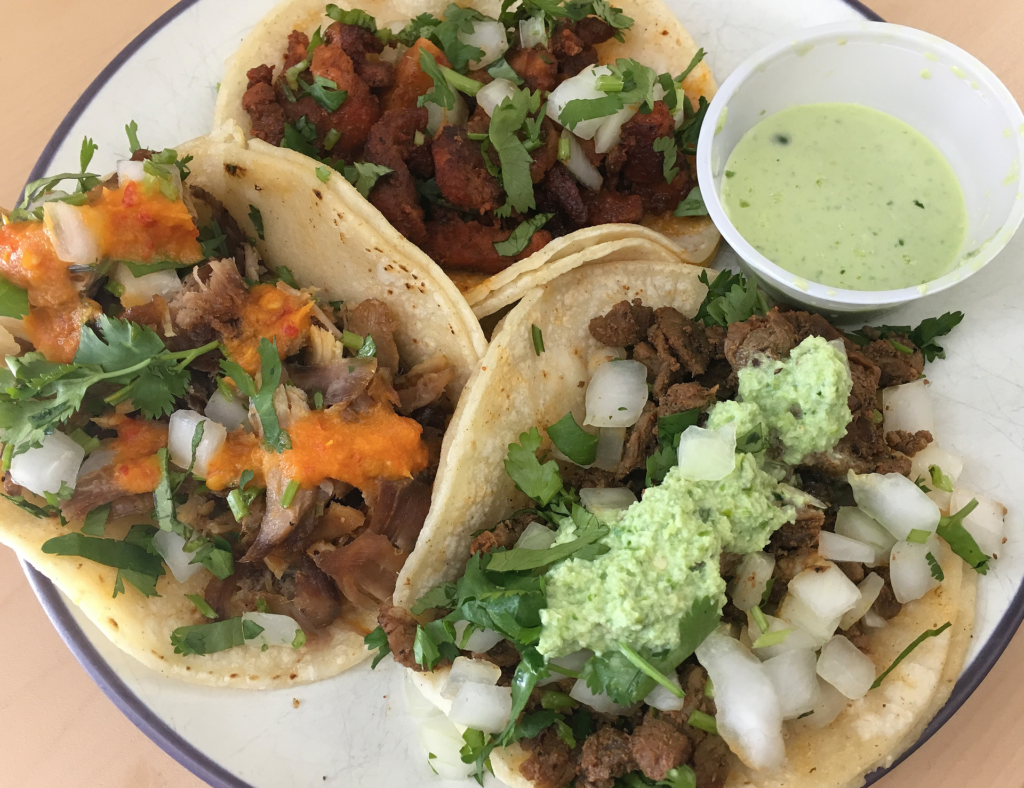 Kansas City, Kansas, suffers no shortage of authentic taquerias. Some, like El Camino Real and San Antonio, are among the city’s favorites. Yet the one we keep returning to, nestled deep on Central Avenue, is El Torito II — not to be confused with El Torito I (Olathe) or El Torito III (the Historic Northeast), respectable in their own rights but not as bustling or consistently good as No. 2.

El Torito II’s taqueria, adjoining its sister supermarket (which offers a surprisingly large, high-quality butcher counter, a bakery and a range of mostly Mexican grocery staples), is actually a full-service kitchen. You can go for chile rellenos, birria, tortas and arrachera. But before you go for that steak, savor the street tacos. Choose from a wide variety of proteins: flavorful asada (slices of marinated steak), sweet and savory al pastor (pork marinated in chile, achiote paste and pineapple), carnitas (roasted and then grilled pork shoulder), chorizo (spicy sausage), buche (pork stomach — better than it sounds), tripa (beef intestine, not for novices), cecina (pulled pork), tender lengua (beef tongue) or chicken. Top with El Torito’s house-made salsas, including the mouth-numbing but addictive salsa chilena, a creamy green habanero sauce that defies you to keep eating, then defies you to quit. (A.F.) 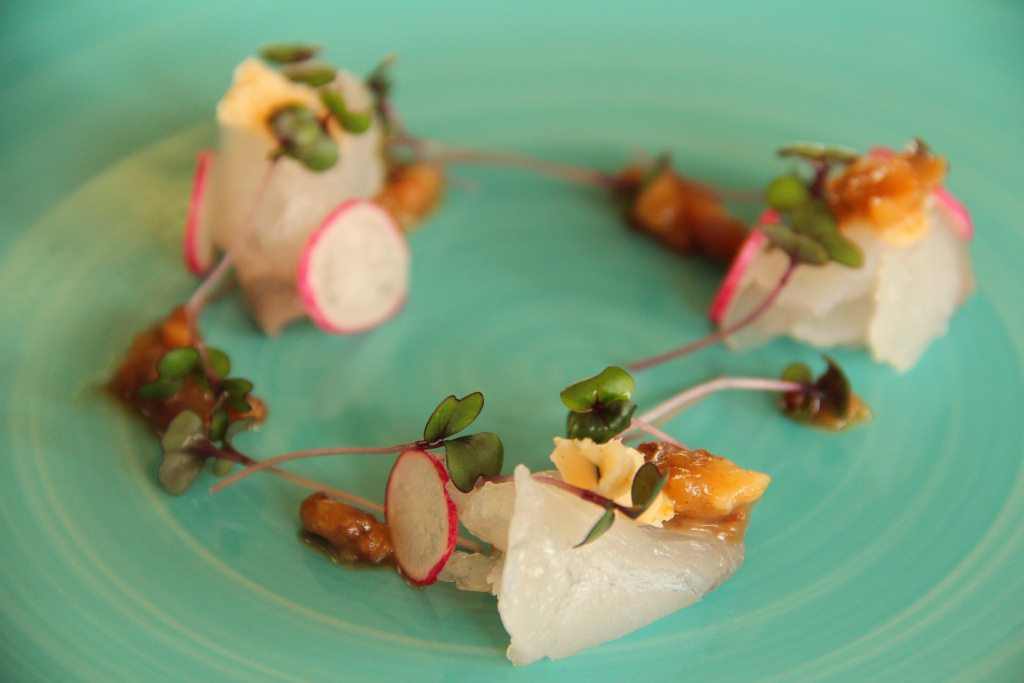 Chef Calvin Davis has dedicated 25 percent of the menu at his new restaurant to freshwater fish, and among his offerings are a few relatively conventional breeds (rainbow trout) as well as some surprises. A standout in the latter category: his on-trend barramundi crudo. Barramundi, or Asian sea bass — in recent history available only in Australia and Southeast Asia — is now being farmed in Iowa. Davis slices his barramundi like a surgeon and serves it with rendered pork fat, candied walnuts, raw radish and microgreens, finishing the dish with his take on XO sauce, that spicy, crunchy Asian flavor that’s typically made with shrimp and bonito flakes. Davis’ version involves a pleasantly intense, house-made capicola that’s part of Freshwater’s charcuterie program. The rich sauce and pork fat render the firm, light fish more savory without weighing it down. Try it as part of Freshwater’s $60 tasting menu or as a standalone dish. (A.F.)