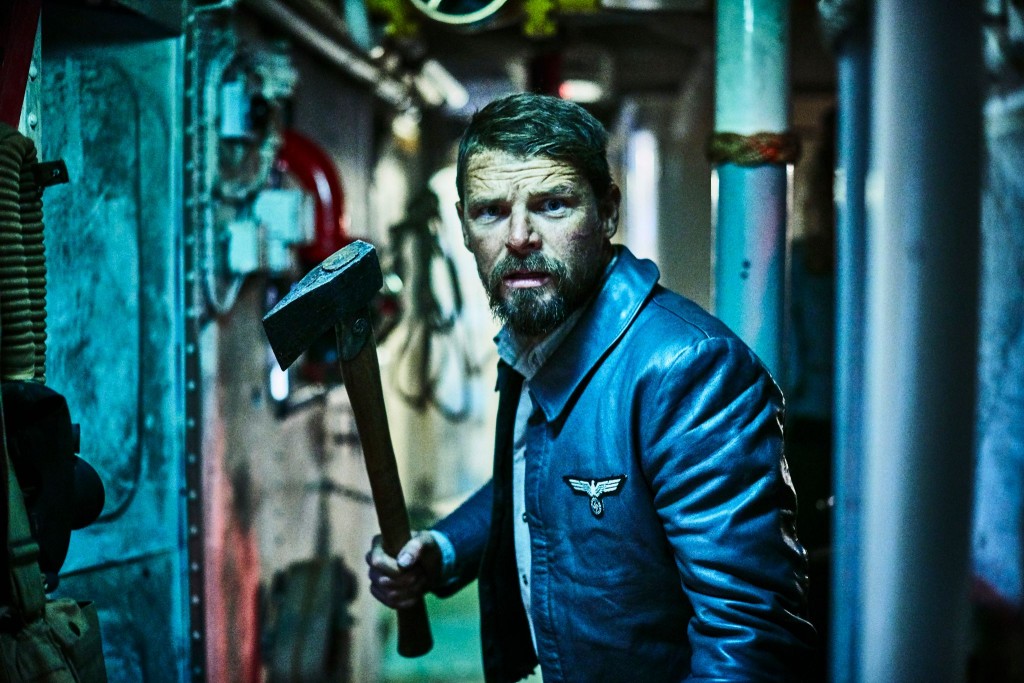 What do you get when you combine a ghost ship, dead nazis, vampires, and a B-Movie with tolerable acting? You get Blood Vessel.

Truth be told, it’s not nearly as good as 2018’s Overlord with an eerily similar plot, but this Shudder exclusive is a great sign for the platform, fans of the horror genre, and dead nazis. Blood Vessel unapologetically leans into horror tropes and the results are everything that you might expect, but I assume if you’re watching a film called Blood Vessel then your expectations are perfectly met by what the film gives. A wonderful late night movie for genre festivals, Blood Vessel never tries to be more than it is. The narrative is simple and without being muddied the tensions and exhilaration are on full effect.

Directed by Justin Dix, Blood Vessel begins with a rag-tag group of individuals from different countries adrift in the Atlantic Sea in a lifeboat near the end of the war in 1945. When all hope seems to be lost, the group runs into a large German ship and sneak on risking their lives if caught. To their surprise, the ship is seemingly empty with the mutilated bodies of Nazi Soldiers on board. Things change when they discover an unexpected stowaway and brace themselves for a night of terror and bloodshed.

If the premise of Blood Vessel doesn’t quite pique your interest, then I recommend you seek out another feature for your movie night. The film’s quality doesn’t go beyond B-Movie standards and even though there is the occasional gripping shot, there isn’t much to be compelled by other than an adrenaline rush. What makes Blood Vessel greater than other horror films of its nature and many modern mainstream ones that trade substance for jumpscares, is that the film is essentially one big cliche. While that can be incredibly negative when complicated with “the twistiest of a twist” or a dull message gift-wrapped in trash, Blood Vessel never attempts to be grander than it is.

When the film starts, it goes and goes. Once you’re on the ship with the characters, you’re stuck on said ship until all the characters are dead or manage to escape. There are no stakes other than life or death, thus not allowing the characters and the audience to catch their breath. Every scene comes with the risk of death, even if it’s as simple as climbing a ladder. The characters are semi compelling, but non ever feel too important to not die at any second. This keeps audiences on their toes while their hearts pump tension. The film isn’t exactly scary, but it is undeniably tense and its narrative choices keep it fresh throughout.

While it’s great that the film never attempts to have a grandiose narrative, there could have been more improvements with other technical aspects and the script. The long shot of the lifeboat in the ocean that opens the film is magnificent but leads to disappointment as nothing else ever recaptures that visual excitement. The film’s screenplay also could have used more fine-tuning. Though it isn’t the film’s central attraction and the script doesn’t need to be award-winning writing, the dialogue is pretty weak. The film is at a constant go, but opposed to long panic-induced tracking shots scene in Overlord, Blood Vessel utilizes more dialogue-driven establishment. This is most likely due to budgetary reasons, but more creativity to make up for this would have made for a better film.

The performances in Blood Vessel is another of the film’s greatest strengths. I will admit I wasn’t expecting much given the nature of the film (who hasn’t turned on the SyFy and been appalled by the acting), but the performances instantly made me eat my own thoughts. Maybe taken too seriously at times, another issue with the film as a whole, but the actors give there all even though what surrounds them is absolutely bonkers. Some are better than others, but everyone is believable in their role and uses this opportunity to showcase their talents. Christopher Kirby and Alex Cooke stand out the most, Kirby playing the demanding force that takes instant control and Cooke as a sly Russian soldier who tricked his way into the group. Kirby commands every scene he’s in and we can hope to see him pop up in more soon. Cooke plays more of the secretive badass that you become instantly compelled with trying to figure out what he is about.

Ruby Isobel Hall also deserves praise as one of the film’s central monsters. Child acting can be hit or miss in horror, but Hall delivers the creeps in all of their scenes. Speaking untranslated Romain, Hall has to work extra hard to play on emotions, her physicality, and her facial expressions. All of these she excels at and the film’s greatest tension comes from every moment she’s one screen combing childhood innocence with nightmarish fear.