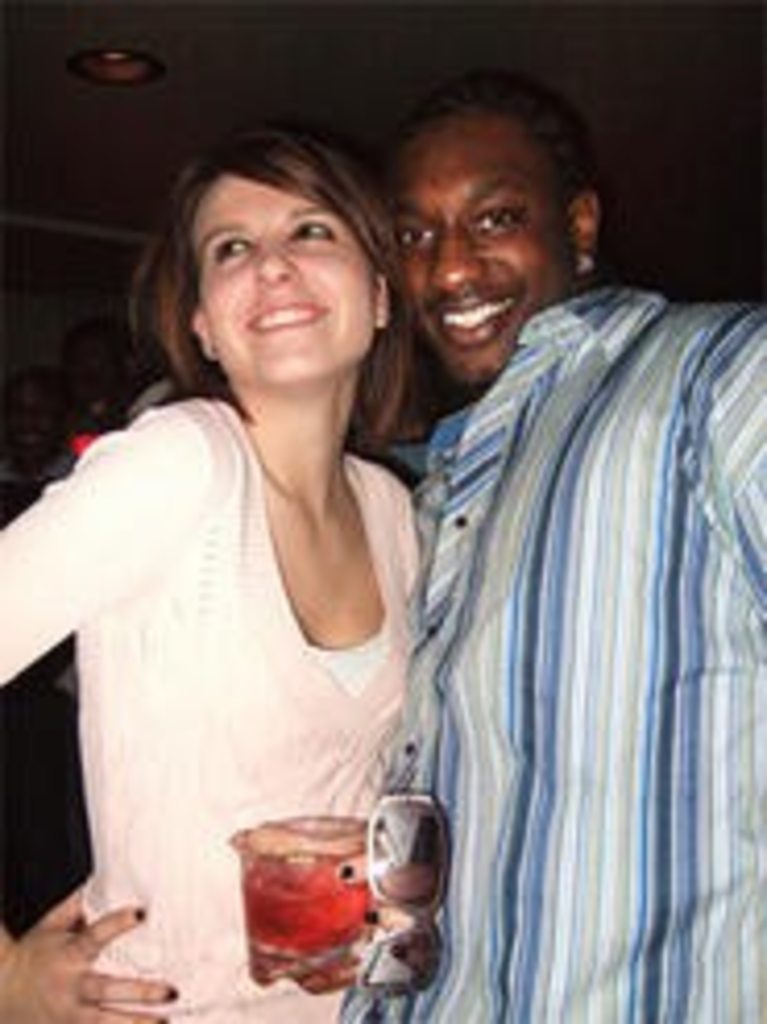 Luckily, we have our friend Kristi to thank for landing a VIP table. She reserved it for her birthday and kindly put us on her list, along with Research Assistants Bill, Ralph and Erik. So, on a booze-soaked night, we were able to stroll past the heat lamps and the huddled masses outside and utter the magic words: “We’re on the list.”

Normally, we abhor anything reeking of listiness or lines, and the scene outside was eerily reminiscent of an episode of My Super Sweet 16 in which so-called cool invitees flaunted their specially made, one-of-a-kind trinkets to get in, and the crashers got bounced on national TV. Blonde has also been vilified for being snobby and superficial. Not surprisingly, Blonde hasn’t changed all that much in the year and a half since its grand opening. It has the same décor, the same bathroom doors that fog up, and that same picture on the plasma screens of that creepy woman blowing out candles. The drinks are still pricey, too — well drinks start at $6, and top shelf costs $8. After buying a round, we made our way to the nooks at the back of the ground floor, where Kristi’s table held the accoutrements of bottle service: $250 for top-shelf vodka, plus mixers.

Obviously, the bulk of that cash pays not only for the privilege to sit down but also for the atmosphere. That consisted of DJ Mike Scott resuscitating ’80s stuff and a cadre of satyrs dancing and grinding wherever they could squeeze their tight, denim-clad asses, such as around the stripper pole and on some low coffee tables. Being children of the ’80s, we enjoyed the mix of music. We encountered a drunken group sing-along to “I Think We’re Alone Now” in the women’s bathroom. Among the random hits that followed Tiffany’s number: Eddie Murphy’s “Party All the Time” and Journey’s “Don’t Stop Believing.”

We settled on the plush benches and started chatting with some of Kristi’s other friends. “This is so not my scene,” Amy said. She works at the Record Bar and is married to one of the guys who used to own Molloy Brothers. She accompanied her cousin Stacey, who was scouting for male models for her agency. She had already handed out four cards. What was she looking for in a male model? “What do you think?” she countered in a joking manner. A few tall guys between the ages of 18 and 40 passed muster.

For some reason, Blonde attracted overly tall men that night. RA Bill, all of 6 foot 1, started feeling wee in comparison. The crowd also consisted of glamazons armed with logo Coach purses, guys in track jackets, dudes in suit jackets with colorful button-down shirts, and Those Who Dress For Attention (in this case, two women in white tank tops that spelled out Bebe in rhinestones, which they paired with micro-short plaid schoolgirl skirts). We especially loved the zomboids — the stoney-faced, inebriated types who lurched through the crowd, eyes fixed diagonally halfway between the ground and the middle distance, looking for their crews.

“It’s like being at Kelly’s, only with nicer clothing,” said a guy named Benjamin, whom we met near the bar. The 24-year-old, who sported a sweater and an Afro, lived in London for six months and New York City for three and was not impressed with KC’s nightlife offerings. “It’s more multicultural [in London and New York] and nonstop. There’s always something to do every night,” he said.

Well, obviously he’s not hanging out with 21-year-old Angell, who goes to Blonde five nights a week. Clad in shorts and white go-go boots, she proclaimed the club “full of awesomeness.” Then we witnessed a potential hookup in action: A tall guy, 27-year-old Brandon, came up and put an arm around her. How did they know each other? “We just met,” Angell replied. “He’s kind of hot.”

“She’s got long legs,” he answered, then swept her onto the dance floor.

Another hookup in action took place near our table, when a guy in a red-and-white track jacket emblazoned with “CCCP” made out with a woman against the back wall. Then another chick came over, jumped up a bit and grabbed her purse off a speaker that was mounted close to the low ceiling. “It’s a purse-hider!” she said. Then she left with her male companion.

At a nearby table, Jamie and Dan, a married couple, explained how they got into the coveted VIP area: Some friends hooked them up. They’re used to table crashers — one time, they had reserved three tables upstairs at Blonde when some guy glommed onto their group and tried to pour himself a drink. When confronted, the guy loftily responded, “I own a BMW dealership,” which qualified as the most obnoxious line they’d heard.

If that doesn’t work, though, grinding on someone is always a hit. That’s what happened to 23-year-old Diane, a political-science grad student at KU. She was celebrating her sister’s birthday upstairs. “I kind of ignored them,” she said.

If all else fails, there’s always the XX-chromosome tactic. We spotted 25-year-old Kate and 29-year-old Shawna, both clad in strapless cocktail dresses, on a platformed table area next to the dance floor and went over to ask how they scored such a spot. Did they reserve it? “We didn’t have to. We’re females,” Kate said.

Hmm, so being hot helps. Then Kate set us straight again. “You don’t even have to be hot. It doesn’t matter,” she said.

People started to take off as 2 a.m. approached. By the dance floor, a tipsy woman in gray wool shorts bent her female friend over and did a hip-thrust toward woman No. 2’s butt. They both straightened up and staggered out. Last call was called, the lights went up, and we spotted a group of guys lined up at the bar, eyeing the women as they filtered out.

The next day, while hungover and cranky, we were a bit horrified when we recalled the $80 bar tab. But we had it better than Kristi, who ended up blowing $600. Next time, we’ll go on a Wednesday, when the bar offers an appetizer, an entrée, a dessert and two cocktails for $20 with a side order of DJs Steve Thorell and Bill Pile. Reservations are required, but that’s more our scene anyway. Plus, we know we’ll be able to snag a place to sit in a grind-free zone.