For a band that experienced fever-pitch buzz not even 10 years ago, British rock band Bloc Party’s popularity has taken a somewhat precipitous slide. It seems likely due to lengthy hiatuses, rhythm section shuffling and forays into sparser musical styles on more recent albums. Whatever the case may be, last-night’s performance at the Madrid reminded us of the fun, pent-up, relentless tension and anxiety that Bloc Party originally struck such a deep chord with. People moved and shook. Whatever the Dorito- and Budweiser-sponsored tastemakers at SXSW or Pitchfork may tell you, this is still a band still worth seeing live. 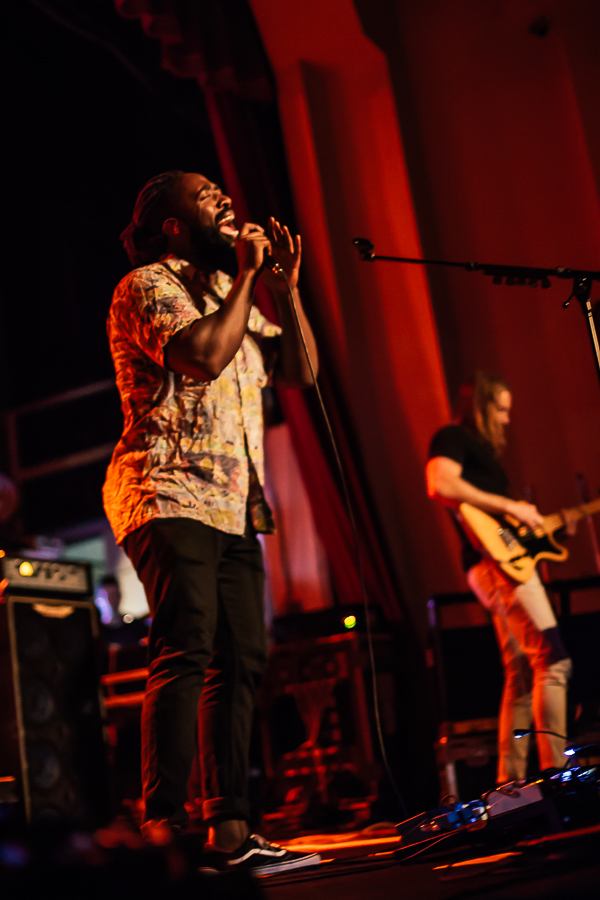 The band opened  its tight, one-hour set with “Only He Can Heal Me,” from 2016’s Hymns.
The song is not a burner, but nicely warmed things up, reminding the
audience of frontman Kele Okereke’s centrality to this band, and
provided a nod to the band’s more introspective direction.
Okereke looped his vocals so that there were three full-throated
tracks beckoning to the audience amidst shoegazey guitar lines. 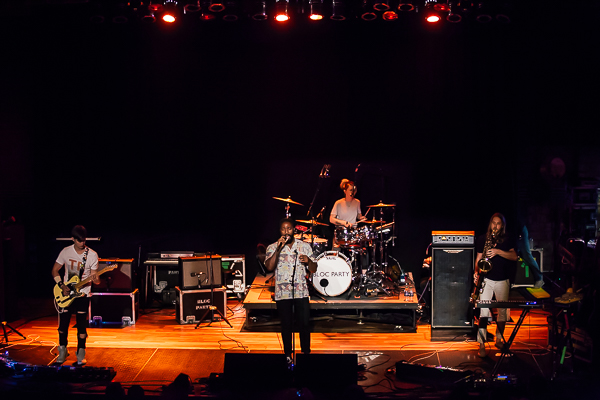 The
setlist heated up with “Octopus,” “Mercury” and “Banquet,” the
band’s defining hit, one still used a decade later in commercials to
sell
cars. The young audience, somewhat sparse at about 300, danced, pogoed
and looked to Okereke (who really does have one of the best names in
music) for direction. 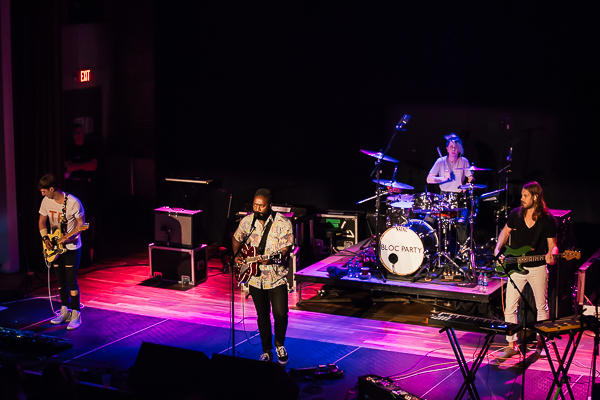 The band’s breakthrough, Silent Alarm,
hit in 2005, a time not so long ago when CDs were fading out but were
still more than just ice scrapers (if even that). It was a loud, fun,
angsty rock record, one that ultimately burned up college and
alternative radio. It popped with energy, and  even
if it wasn’t really saying much, it sure felt at the time like it did.
Because of this record, Bloc Party (as well as other bands like
Interpol, Arcade Fire and Franz Ferdinand) just sounds like the aughts to many people.
This seems to have been difficult for the
band to shake, particularly when everything about the way music is
consumed has changed so much. 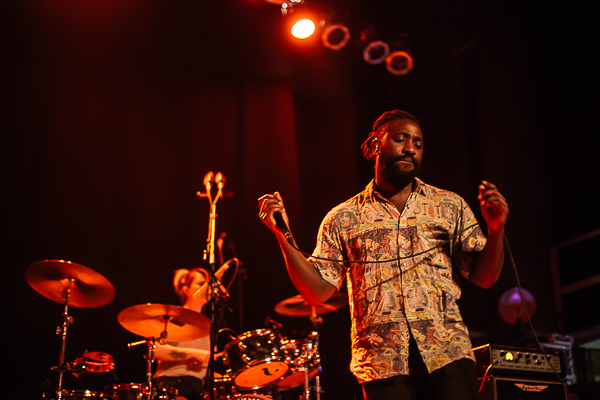 The
biggest change for the band in the subsequent time has been recent.
Last year, Okereke chose to replace the band’s original bassist and
drummer
with newcomers Justin Harris and drummer Louise Bartle. Okereke told NME last
November that
the shakeup “… was about someone doing cocaine and someone not being
into it,” and left it there. This may well have ended the band,
particularly with the loss of drummer Matt Tong. Bloc Party perhaps does
not get enough credit for its technicality,
but Tong’s shoes are difficult ones to fill. Last night, the very petite
Bartle very much proved her abilities, and, in part because of her tiny
size, is really fun to watch. The band survives.
Bloc Party’s newer material — more ripe with loops, creeping guitars and tingy
percussion — has been received with mixed reviews. What can come off
somewhat
bland on record felt more immediate
and expansive last night in its live expression. 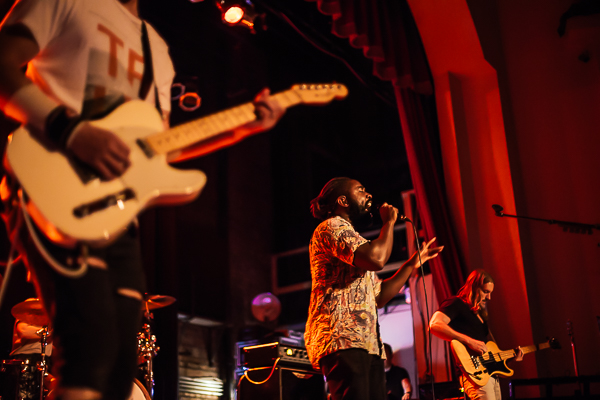 Okereke’s sheer charisma helps, too. He
laughed at his Kansas-Missouri mix up with the audience (why people
always react so much to a ridiculously easy mix up
to make always is perplexing), asking at one point “Are we still
friends?” The show then took a brief turn towards the political, when
Okereke made a special aside to the audience. 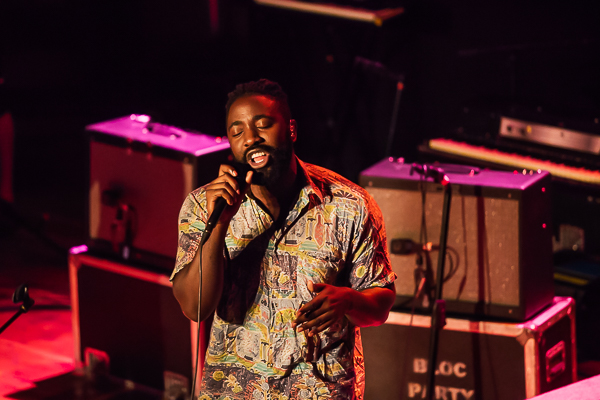 “This
next song is dedicated to people who get in front of crowds and say
something they don’t believe, knowing it will get them far” Okereke said.
“I would like to dedicate this song to Donald Trump.” The band then dove
into “So He Begins to Lie,” which certainly wasn’t written about the
Donald but lyrically is nearly perfect for our current situation: the
cameras watching / he
takes a breath / even though that they know / that he knows / that
they’re on to him / he don’t break a sweat, no / it grows and grows and
grows / inside of him, there’s
nothing there. 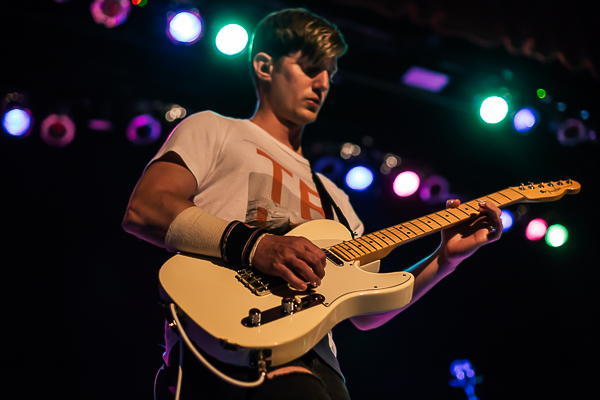 The band closed with two of its most driving songs, “Helicopter” and “Ratchet,” and the audience — pogoing and calling back — ate it up.

“Last song, boo indeed,” said Okereke, smiling. Don’t listen to anyone. This band still very much has it.

MS MR provided a dancehall-banging opening set that quickly warmed up the audience. Their set  featured one of the most artful recoveries of the year, brought on by an unusual wardrobe issue suffered by Lizzy Plapinger, whose bodysuit unfortunately split right at the crotch. In the middle of the set, a stagehand walked onstage to let her know what was happening.

“I have been told about my pants,” she laughed to the crowd. “You all have seen a vagina before. We’ll just keep going.” (It wasn’t quite that revealing, but admittedly it was incredibly distracting until she dealt with it). 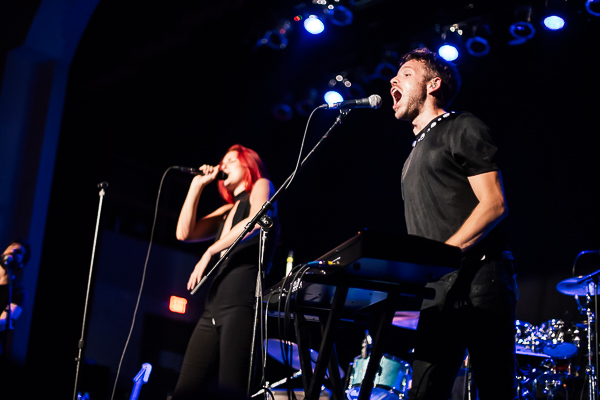 Only He Can Heal Me

So He Begins to Lie