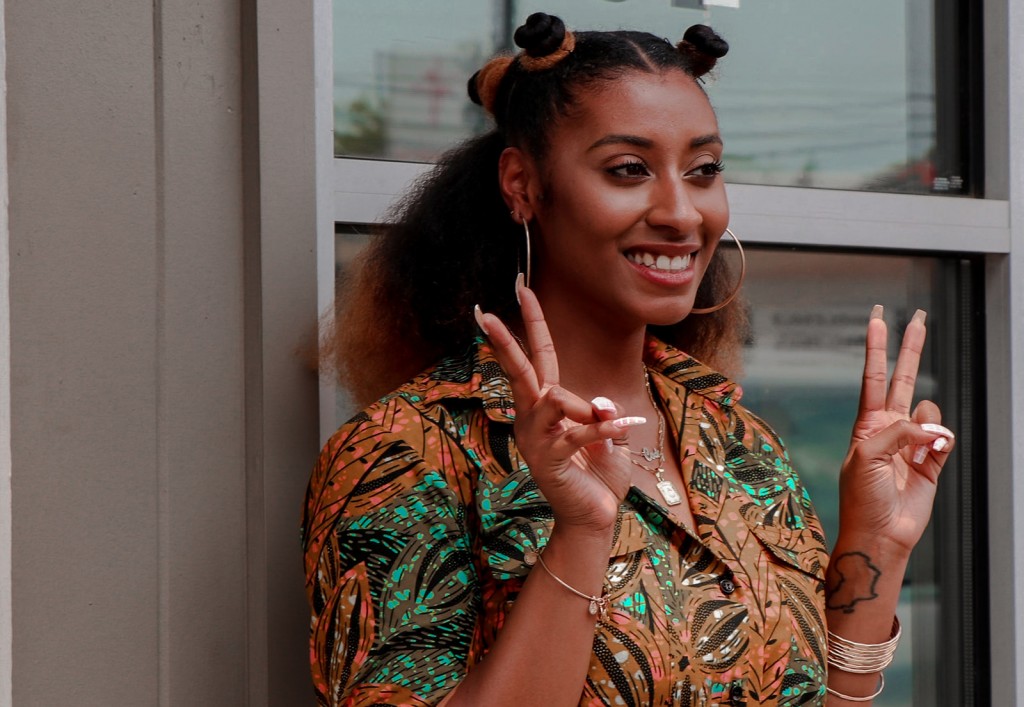 Cori Smith outside her bookstore, BLK + BRWN. // Photo by AJ McIntosh (We Are Here Studios)

It doesn’t take a well-read historian to know the complex and ugly history of the Black community’s relationship with America and the erasure of Black history. As a Black person who came up through the U.S education system, the format always seems to be: slavery, Martin Lurther King Jr., Rosa Parks, and Obama. When chattel slavery is the foundation of your Black history knowledge, it dehumanizes Black Americans and robs young Black folks of the opportunity to learn how deep our history truly runs.

Despite centuries of slavery and colonialism, Black culture permeates the world through diaspora, and with it, Black history. Cori Smith of the new Black-owned book store BLK + BRWN is doing her part to maintain and cultivate our history.

On Juneteenth, Cori welcomed Kansas City into her new bookstore, BLK + BRWN, with overwhelming support from fellow bookstore owners, the press, and citizens alike. Coming off of the heels of her grand opening, I spoke to Cori about her upbringing, the intersection of Blackness and education, and plans to expand BLK + BRWN.

The Pitch: Inadequate access to education is still a huge problem in Black and brown neighborhoods throughout the United States. Can you talk about growing up in Wyandotte County and how the education system there inspired your passion for literature?

I was fortunate to still get the benefit of the Black and Proud ’90s and was exposed from a young age to what it really means to be proud of our Blackness. I attended Kiddi Kollege on Quindaro for pre-K and kindergarten. There, I learned about Harriet Tubman and was inspired by the greats such as Venus and Serena Williams. Our fiercely unapologetically Black teachers—Ms. Gray, Ms. Chandler, and Ms. Castleberry—made sure that we knew love and had an abundance of love for ourselves. From there, the fire for more was ignited.

It was not until I started at Sumner Academy [of Arts & Sciences] in eighth grade that I would have another Black teacher—but, in the meantime, I read everything that I could from West Wyandotte Public Library. Although like most curriculums across the nation, there was not much Black or Brown literature discussed in class, I recognized early on that I exist. Therefore, stories about people like me must exist as well. I have my grandparents and mother to thank for all the trips to the library without fail. The visits to The Coterie Theatre whenever Black plays were performed, always keeping Black books flowing through our house.

Wyandotte County has always felt very Black and Brown. The culture there is very much ours. Sadly, it doesn’t look that way aside from residence. The resources are all being pushed further and further west towards the Legends [Outlets]. But, we are very much still there.

You mentioned the excitement you felt as a kid when your mother took you and your brother to the library. Was there a specific genre that you gravitated towards?

From a young age, I was always obsessed with history! My favorite genre was nonfiction. I loved hearing about the Civil Rights eras, the Ruby Bridges, the Black Panther Party, slavery by any and all other names.

Have you always known you wanted to open your own bookstore or was it something that you considered during your college years?

Honestly, I’ve always wanted to have my own library—like in my home. But, it was not until my brother passed away that I finally started thinking that I could open up my own bookstore. He was the free spirit of us two.

In 2019, I started to seriously consider what it would take to make it happen. Growing up I had three careers in mind: Hairstylist, criminal defense attorney, and librarian. I quickly discounted the hairstylist after hearing how hard it is on your body. I actually went to law school and left after completing my first year. I was in Florida during the 2016 election year, and things just felt way too violent. And, as for the librarian part, I applied for positions with the library every year from the age of 14 until even recently. And, never got so much as a call. So I dismissed that, as well. Then I finally found the courage, thanks to Cody (my brother) to just create my own seat and my own table. Do it my way.

Speaking of college, can you talk about how your time at Clark Atlanta University helped nurture your love for literature and reading?

Clark Atlanta felt like a mecca of history. My favorite professor, Prof. [Gwendolyn] Morgan, was my Honors English teacher. My freshman year, she handed out an essay breaking down Nelly’s “Tip Drill” video. I wish I could have taken a picture of all of our faces when we realized she was serious. She made learning and literature relatable. She made it fun. Fortunately, I could say that about a bulk of the Political Science track professors, but Prof. Morgan was unmatched to me.

Our motto is “Find a Way or Make One,” and everything about Clark Atlanta was supported by integrity and history. Clark Atlanta was the first place where I was asked to publish my research and my studies. A place where I was continuously pushed to find out the truth and to be unafraid of the uncomfortable truths that sometimes come with that. A few of the books that I consider Blassics in the store and in my life are books I read in college. The way that many of my professors challenged our minds to deprogram from a lot of the traditional ways we recalled history is what I am most thankful for.

I mentioned earlier how a lack of access to education hinders a lot of Black and brown people. As I’ve gotten older, my eyes have opened more to how flawed the U.S. education system is. For a lot of people, the only way to make it through is by being gifted in sports or academics. I’ve always believed reading can help people discover more about what interests them. Who are some authors that have inspired you as a teenager/young adult? 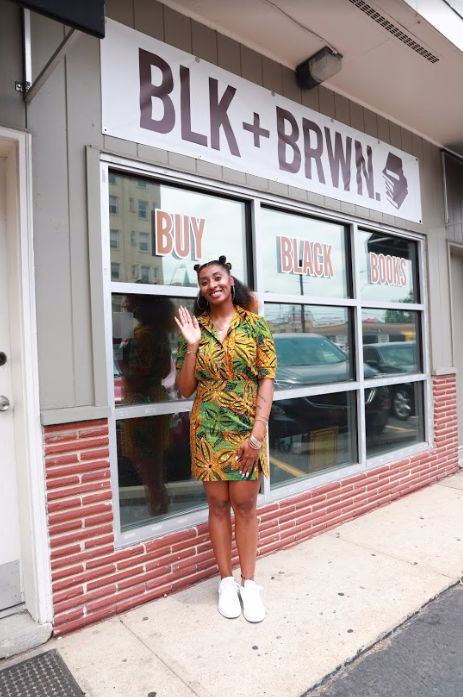 Ooo I could list so many. As a teen, I read the entire series of The Cheetah Girls books by Deborah Gregory and Drama High by L. Divine. Just about every single book about the Black Panther Party. Huey P. Newton, Elaine Brown, Assata Shakur, Angela Davis, and Fred Hampton—by way of Jeffrey Haas—have been big influences on my life. Joan Morgan (When Chickenheads Come Home to Roost); Frantz Fanon (The Wretched of the Earth); Paulo Freire (Pedagogy of the Oppressed); Dick Gregory; Toni Morrison; James Baldwin; Langston Hughes; and my all-time favorite writer, of course, Dr. bell hooks (All About Love, Communion, Salvation, etc.)

As a Black man who’s loved reading my entire life, it’s so cool to see multiple book stores in Kansas City owned by Black people. Can you talk about the first day BLK + BRWN opened to the public and the huge amount of support you’ve received so far?

I did very little actual promo around the grand opening. I was going for a truly organic situation. It was that but also so much more! A couple of news outlets reached out to me to do a few stories. I thought they’d be back shelf stories just to fill space in the coming months and they absolutely proved me wrong. I planned for maybe 50 people to show up throughout the day. From the time I officially opened there were so many people in and out of BLK + BRWN. Mayor Quinton Lucas came by, signed my door, and bought some swag. I was shouted out by West Wyandotte Library as a destination on their Juneteenth Passport this year. I had a massive cake in the shape of books that I offered to guests, and we cut a ribbon. The news showed up a few times and did some interviews.

By the time it was said and done, I had less than 20 books on my shelves. I have since been shouted out on The Friend Zone podcast as a Black Business of the Week, and I’ve been featured on several news sources (print and on-air). Every day I get the pleasure of talking to amazing Black legends. Mr. Alvin Brooks, Kansas City activist, has dropped off books to me; Mr. Larry Lester, co-founder of the Negro League Baseball Museum, has dropped off books as well.

People have come by the store and shared about the store from so many other places outside of Kansas City, and that just feels so surreal. I have had a few schools and universities reach out to me to facilitate conversations with their students/staff/parents. I’ve had a few comrades in the system who have reached out to me to send literature to them/ I’ve had churches have me come out to speak, as well.

It’s really rewarding seeing so many new Black authors finding success around the world. Not only authors, but people in their communities making books more accessible. For example, Chicago-based rapper Noname has a book club and sends free books to incarcerated Black folks. When you look to the future, what are some things you want to accomplish with BLK + BRWN?

I love Noname. So many things. I hope to have a larger space that can truly serve as a separate art gallery. I have a Mentorship program, Cody’s Homies, that I plan to grow to add more little and big homies tenfold in the next year. I also hope to work with school systems, prison systems, and other spaces to help diversify their libraries. Lastly, I hope to grow BLK + BRWN events and expand my space. I’ve always wanted a community center that felt like family.

I’m always looking for new books to read. For myself and the readers, what are some of your favorite books you’ve read recently?

When No One is Watching by Alyssa Cole. The Marathon Don’t Stop by Rob Kenner was definitely pivotal in my journey to opening BLK + BRWN. The Vanishing Half by Brit Bennett. After the Rain by Alex Elle. Set Boundaries, Find Peace by Dr. Nedra Tawwab. The Will to Change: Men, Masculinity, and Love by bell hooks. Dapper Dan: Made in Harlem: A Memoir by Daniel “Dapper Dan” Day. And Pushout by Monique Morris.