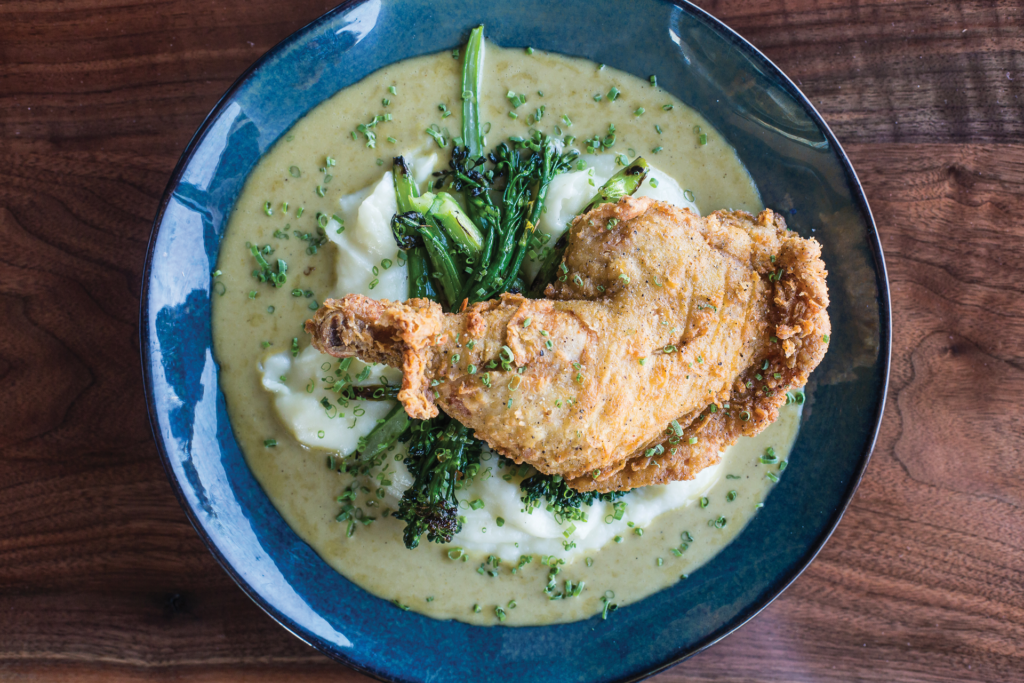 Does anything sound more frivolous than a fritter? Order one and try to stop the hard consonants from fizzing off the tip of your tongue. No other food insists so fervently on its own cuteness. Never mind that fritters, by definition, must be battered and fried — and fried foods, say the snobbiest among us, are for TGI Fridays, not lofty bastions of nose-to-tail New American cuisine.

No one got the memo at Black Dirt, the new South Plaza playground for James Beard-nominated chef Jonathan Justus. Here, the fritters are compulsory. Three golden-brown rounds of rich duck confit and creamy Missouri rice, each the size of a pocket watch, are plated atop a silky, canary-yellow puree of butternut squash and malted barley. Colorful accompaniments — a sour tangle of vibrant red cabbage, a sage-green dollop of a zippy poblano chive aioli — balance the plate. Chase down a morsel of every ingredient with your fork, and they harmonize to something greater than the sum of their parts. 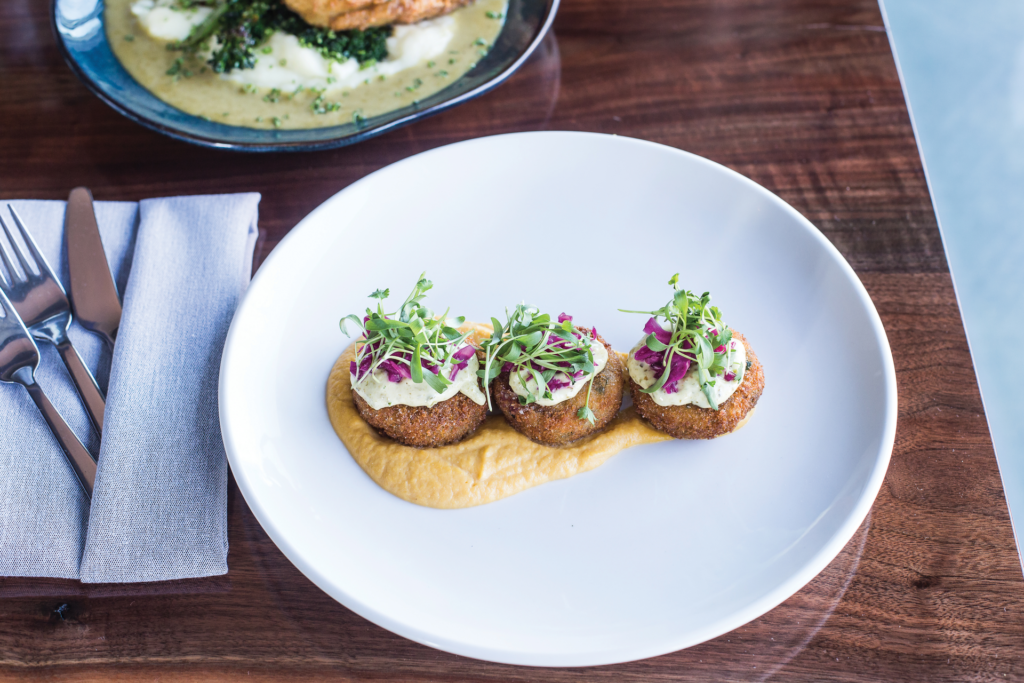 That’s the promise of Black Dirt, where the dishes are frequently good but occasionally exceptional. Justus and his wife, Camille Eklof, opened the restaurant in January after three years of planning (and three years of breathless, anticipatory press coverage). The couple’s first restaurant, Justus Drugstore, in Smithville, has been a destination for fine dining for over a decade.

It might be tempting to bill Black Dirt as the younger, messier crack-up to Justus Drugstore’s responsible elder sibling. Meals here are simpler and less expensive, and cheaper cuts of meat and offal are well-represented. An enormous, U-shaped wooden bar juts out from the wall like a tongue, giving the dining room a focal point and the space a more casual vibe. The bar program feels like more of a focus, too — the cocktail list is small but thoughtful, and I found something to like in nearly every drink I tried. (That said, the “Heels in Paris” is my pick: the pear brandy, Calvados, Champagne and Angostura bitters blended into a round, rich drink with unexpected warmth.)

But in some ways, Black Dirt is more ambitious than its ancestor. The restaurant seats nearly twice as many diners as Justus Drugstore, and the menu can seem less intuitive. Where Justus Drugstore groups plates into traditional numbered courses, Black Dirt groups plates by size and temperature. Diners can order a “larger plate” for themselves or compose a communal meal from an impenetrably arranged selection of “small plates cold,” “small plates cold and warm,” or “small plates warm.”

The larger plates are a little less adventurous, which is not to say they’re less interesting. I would gladly re-order the fried chicken, a Campo Lindo chicken quarter surrounded by a moat of creamy mashed potatoes and pale-green sage gravy. The chicken was succulent, the herbed breading was thin and crisp, and dainty islands of slightly charred, bitter broccolini cut through the rich flavors with all the drama of Moses parting the Red Sea. The sage gravy had formed a dull, unappealing skin by the time it hit my table, but it had a great personality.

The blackened catfish was tender and clean-tasting, with a creamy risotto to complement the fish’s bold spice paste. And the milk-braised pork was beautifully plated: slices of moist Berkshire pork loin, cooked to an attractive ballet-slipper pink, fanned across the plate beneath fork-tender golden beets the sunny shade of egg yolks. Still, a couple of the supporting players were miscued: the “mustard-seed scented cauliflower” didn’t offer much in the way of mustard-seed flavor, and the “pumpkin cracklins” were soggy by the time they arrived.

On my three visits, the servers offered little guidance on how to compose a meal from the small plates (even a recommended number of plates would have helped). But two plates per diner felt right for a light meal with communal sampling.

A few of the small plates matched those fritters in their near-symphonic blends of textures, colors, and flavors.  The seared scallops were lightly browned with an air-kissed crust, their insides tender and buttery. The broth was light but complex, dotted with acorn squash and pumpkin-seed pesto.

The duck egg fettuccini was similarly well-balanced. Shreds of peppery arugula clung to each chewy noodle, and a dollop of crème fraiche with lemon zest and fruity olive oil brightened each bite. Curls of wild mushrooms mellowed the dish, adding earthy low notes like an orchestra bassoon.

Other plates seemed flat by comparison. The chicken gizzard salad was just OK. Though the herb-breaded gizzards were boldly spiced and tender (admittedly not a word I often apply to gizzards), the salad was lackluster. Besides a few scant slivers of radish, there was little to complicate the dish but a bitter and overly salty “house cultured buttermilk dressing.”

The “crispy pig tail” was stronger. Justus snips his pig tails into segments no larger than a finger joint, helping squeamish diners temporarily forget what they’re eating. Don’t let the anatomy deter you. Black Dirt’s pig tails showcase all the glories of meatdom in one petite package: crisp skin, melting fat, slightly sour and grassy meat, chewy tendon. But their accompaniments were confusing and unpleasant. Pig tails are finger food; I’m not sure what I was supposed to do with a crunchy medley of bean sprouts, whole cilantro stems, and slices of seeded jalapenos that seemed cribbed from the garnish plate of a phở joint. 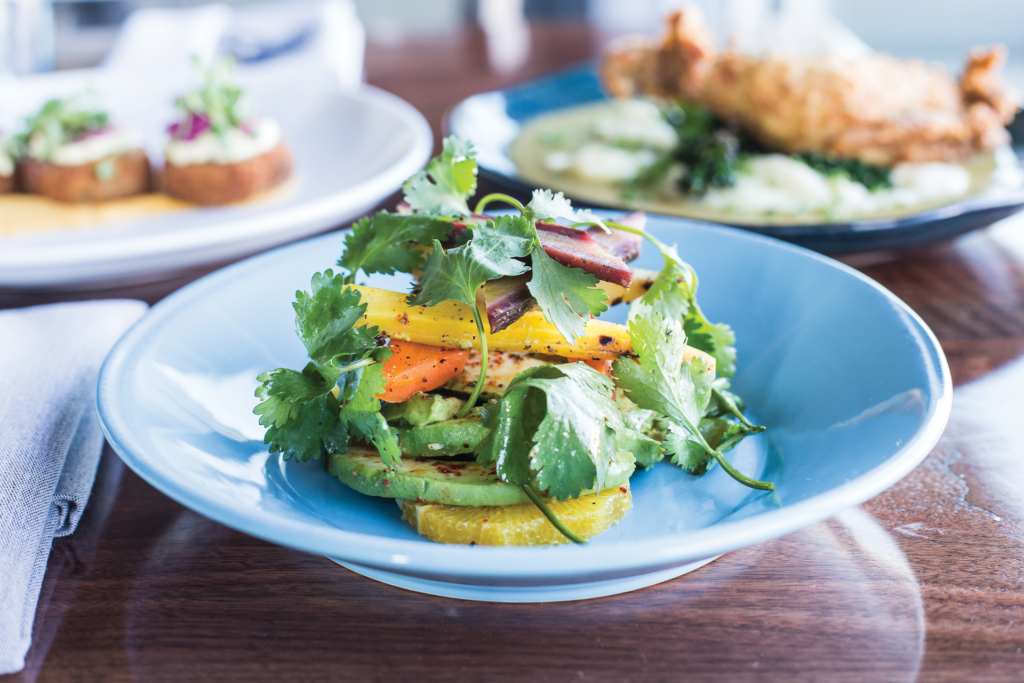 At times, Black Dirt shows stress fractures from its attempts to unite volume and intimacy, quality and value. The new-construction space at 5070 Main is enormous — 5,000 square feet — but Justus and Eklof have parceled it out into smaller dining rooms to manufacture coziness. It’s a smart strategy with mixed effects. The ever-changing palette of lights, finishes, and materials made me feel at times as though I were in the kaleidoscopic showroom of a furniture store.

The southwest dining room, just beyond the bar, is the most welcoming. Tufted, caramel-colored banquettes and busy floral carpeting give the space a summery feel to match the natural light streaming through the south-facing windows. Avoid the narrow-shouldered dining room in the center of the restaurant, which deadens the ambience with sedate gray paneled walls, somber farm prints, and tray ceilings accented with queasy blue LEDs.

The menu descriptions are similarly conflicted. For all Black Dirt’s earthy, populist aspirations, Justus can’t seem to stop himself from inflating commonsense ingredients to the level of opaque modernist koans. A tantalizing octopus plate is served with “acidulated crispy potato”; a dish of sautéed mixed mushrooms is topped with “Microplaned cheese.”

This last description is especially baffling. The Microplane is a trademarked, name-brand zester/grater. It’s great. It grates. It’s a cheese grater. It’s really great at grating cheese. At Black Dirt, you can order a dish of sautéed mixed mushrooms and pecans topped with grated cheese. Which is all just to say: some of the lingo feels a little off-brand for a restaurant with “no compromise, no jargon” in its mission statement.

The best way to experience the Black Dirt ethos is to sit at the bar, where you can order from the full restaurant menu as well as from a smaller menu of bar bites. Here, Black Dirt’s stated aversion to pretension feels the most honest. The bartenders are casual and chatty, and you feel just as comfortable ordering a Hamm’s draft as you do a Founder’s Breakfast Stout (I ordered both).

The bar food is unfussy but refined. I adored the brandade, a dip of smoked, miso-and-sake-cured Missouri trout whipped into a feather-light fluff with potatoes, dill, and extra virgin olive oil. A delicate, golden-brown layer of Shatto Lilly cheddar cheese crisped the top, and the crostini served alongside was a feat of engineering: the restaurant shaves “aged” bread from dinner service on a mandoline to achieve a crisp, light, razor-thin toast.

Also good: the classic burger, which topped a supple housemade bun with grassy Barham Family Farm beef, raw cheddar, and house-cured and -smoked bacon. The fries were crisp and substantial, served the way they should be: with ketchup and mayo.

With only two months under its belt, Black Dirt is already a worthwhile stop for thoughtful cocktails and comforting entrees, and the kind of place where overlooked ingredients get — and earn — top billing. It has time to work out the intermittent tension between its aspirations and expressions. And, lucky for us city-dwellers, following along with Justus no longer necessitates a hike out to Smithville.

Best bet: Sip the “Heels in Paris” and share the duck confit fritters with a tablemate. Dinner’s the Campo Lindo fried chicken.