This fact-free 108 minutes is mostly the rock'n'roll ride of the year. 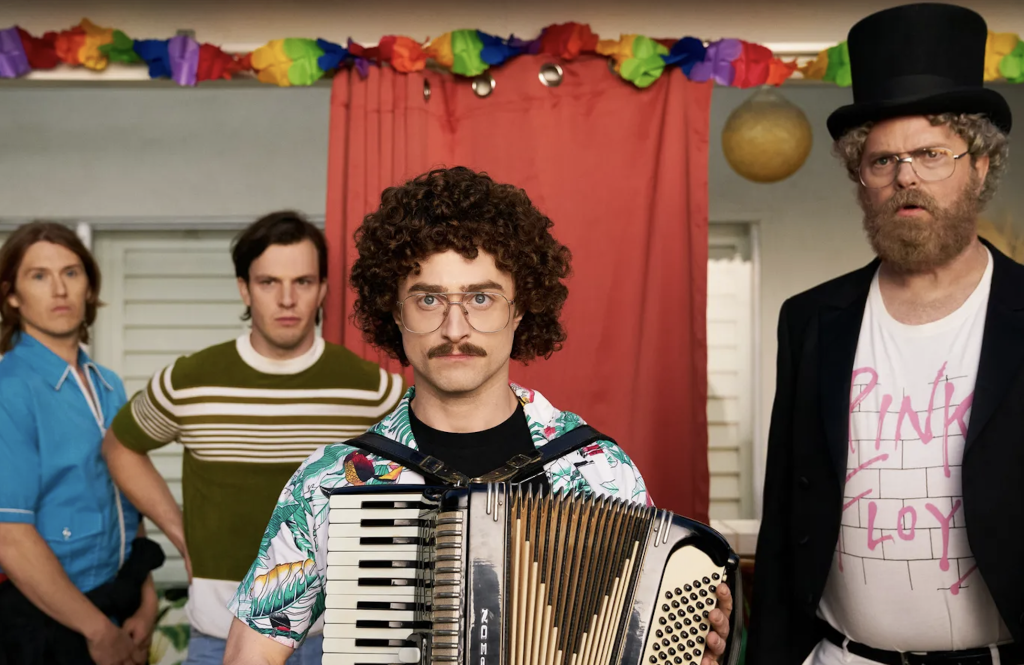 No one in pop culture owns the space occupied by “Weird” Al Yankovic. Mostly because no one else has ever really gunned for that throne on such a scale, nor while riding such mainstream support. The accordion player who spoofs hit songs owns the parody market on a level unparalleled, and as the only household name in an entire genre of music, is obviously the perfect choice for an installment in the over-saturated field of music biopics.

Just as the man himself stands alone in a space, so now too does his film Weird: The Al Yankovic Story. While there are a million biographic tales of musicians, very few eschew facts entirely—at least deliberately—to build a legend untethered from the need for reality, and therefore more of an accurate representation of the subject’s ~vibe~ than any dutiful recounting could accomplish.

Weird follows Al Yankovic’s rise from outcast child to accordion superstar; brazenly rewriting history and recasting the parody artist as the biggest name in rock’n’roll. What seems on the surface like the normal self-serious approach to music royalty in film quickly shows itself to be perfect tongue-in-cheek goofballism, that sprawls from its starting point out into lunatic fiction space.

The trailer for the film almost leans too heavily into being a serious biopic, if a little funny around the edges. This is a fake out, because Weird is out-of-control hilarious.

Daniel Radcliffe’s portrayal of Al is a highlight of his post-Potter career, and he’s flanked in otherworldly performances from Rainn Wilson as eccentric godchild Dr. Demento and Evan Rachel Wood as Madonna, in the year’s greatest supervillain role. The Funny or Die-ness of director Eric Appel’s vision churns with a mix of celebrity cameos, instantly memorable scenes, and killer performances of Al’s best tracks—albeit it placed in wildly reimagined contexts.

As a bit of a hiccup, the third act leans a little too heavily into making sure to hit the same bullet points from the genre that it skewers, but is more sincerely/devoted to marking those boxes seemingly for the sake of making sure they’re included. What starts as a lunatic journey into a Scarface-esque drug lord action movie descends into a middling energy as we get through the textbook father-son redemption arc and some bits of Al lineage world-building with a final musical production. This isn’t enough to kill the great vibes of Weird, but it’s a bit of a bummer that a petering-out prevents this from being an all-timer. Still. There’s a full 70 minutes of excellent material extracted from a two minute joke trailer in 2013, and that’s impressive enough.

You wouldn’t necessarily expect that one of the funniest, smartest and most inventive comedies of the year would be an hour and forty six minute long adaptation of a 12 year old Funny or Die sketch but Weird: The Al Yankovic Story is quite the overachiever.

Weird: The Al Yankovic Story is currently streaming for free on the Roku Channel, which you can watch RIGHT NOW in your browser or on the app. And you should do so.