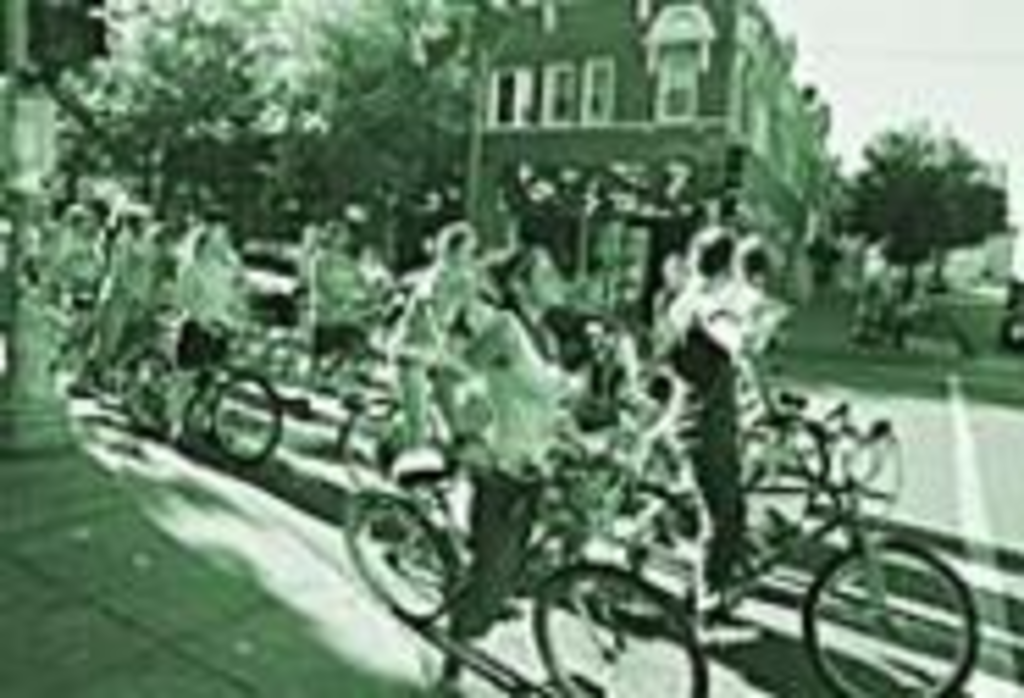 In the middle of rush hour on Thursday, September 21, 60 cheering people on bicycles streamed slowly past the corner of Westport Road and Broadway. Behind them, a line of slow-moving cars grew several blocks long.

Cyclists clad in Lycra rode next to others wearing beat-up sneakers and faded T-shirts; rickety bicycles wobbled along beside sleek mountain bikes. In this crowd, all were equal. The event was Kansas City’s first Critical Mass ride, taking place at the same time as other such rides worldwide in celebration of World Car-Free Day.

Critical Mass is not an organization, although its participants call the group “an unorganized coincidence.” The events began in San Francisco nine years ago with 48 riders; now Critical Mass rides in San Francisco and other major cities attract thousands of cyclists, who ride as a group in rush-hour traffic to raise awareness that bicycles and public transportation are alternatives to cars and clogged roadways.

They want to fight congestion by causing it.

During the ride from Westport to the Plaza, most drivers seemed curious about the mass of cyclists holding up traffic. But not every motorist was in the mood for Critical Mass. An irritated man driving a gold Mazda shot past the group at a high speed, veering into oncoming traffic and coming dangerously close to a cyclist.

Getting people to notice bikers is precisely the point, says Sarah Gibson, who rode in the event. And it was hard to miss a large group of cyclists blowing on whistles, leisurely pedaling toward the Country Club Plaza.

“A bunch of folks on bicycles took full enjoyment of their piece of the pavement without worry or fear,” says Gibson. The congestion created by Critical Mass can’t help but draw attention to Kansas City’s lack of bike lanes, she says. “Most people I talk to about cycling in Kansas City say it’s way too dangerous,” says one of the event’s organizers. “When you ride your bike on the street, you’re just trusting everybody to pay attention.”

Some “serious” cyclists, however, have scoffed at the ride. Gibson says they’ve told her that blocking traffic isn’t the way to go about getting bike lanes or raising awareness. But organizers say Kansas City’s Critical Mass was a success. No one was injured, no accidents occurred, and response from motorists was mostly friendly.

For many people who rode in the event, bikes are their only means of transportation. Corrie Hogg would like to take a bus from 39th and Rainbow to her job downtown, but the bus schedule requires her to transfer three times. “It takes me 20 minutes to ride my bike and an hour and a half to get there by the bus,” she says. Hogg hopes that Critical Mass will draw attention to Kansas City’s need for better public transportation.

By the time the Critical Mass riders reached the Country Club Plaza, a Plaza Parking Patrol officer was puttering behind them. One rider yelled, “Hitler!” but the officer eventually pulled over and the group pressed on.

Gibson, who wore a black T-shirt with “ONE LESS CAR” printed in large white letters across the back, rode up alongside cars at an intersection and handed out fliers. Some drivers took them and read while they waited. Others pretended not to notice.

Just outside Williams and Sonoma on the Plaza, a middle-age woman stared straight ahead and clenched her steering wheel as if oblivious to the whistles and commotion just outside her rolled-up windows. The woman didn’t accept a flier from Gibson. But if the group has its way, she’ll see them again.

Critical Mass devotees plan to ride the last Friday of every month — though no one has announced plans to ride on I-35 during rush hour. Instead, they’ll meet at the Westport Sun Fresh and hit the streets at 5 p.m.

Gibson says she’ll ride again. She’s tired of the dangers cyclists face when they venture out into city streets. “This is going to get big,” she says.