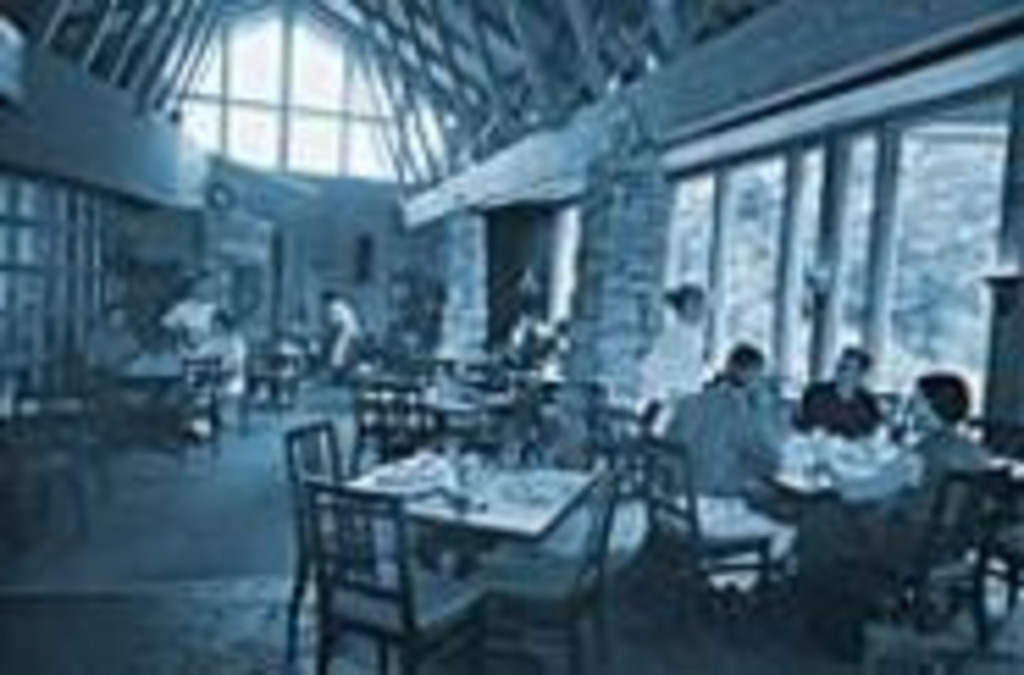 Will the real Pachamama please stand up?

“It’s pronounced ‘Pock-a-mama,'” announced a know-it-all acquaintance when I told her I was driving to Lawrence to dine at that restaurant with the unusual name. But once I arrived there with John and Carolyn in tow, our waitress corrected me: “It’s ‘Pash-a-mama.'”

Ah! But a couple of days later the restaurant’s chef, Ken Baker, informed me: “It’s ‘Patch-a-mama.'”

I suppose I could have consulted an international dictionary for yet another pronunciation; “Pachamama,” according to our very with-it waitress and the unsmiling young host (who looked like a Versace model), the Indian word translates as “Mother Earth.”

“It’s all about the different cuisines of the world and is represented by our restaurant’s logo,” said the waitress, pointing to the white vellum menu’s drawing of two leaves and a fork with curly tines.

I didn’t dare look over at John, but I suspected his eyes were already rolling to the top of his head. When I’d told him I was taking him to a restaurant serving “New World cuisine” in Lawrence, he warned me: “I hope it’s not some tired old hippie place with lentil this and tofu that and a Save-the-Rainforest Salad!”

The Pachamama logo does slightly resemble the leafy emblem of a California-based group called The Pachamama Alliance (whose mission is to “halt the destruction of the earth’s tropical rainforests and the loss of its indigenous cultures”), which might be a coincidence. There’s also a Yugoslavian musical ensemble called Pachamama, which plays music of the Andean culture.

But you’d never guess there were so many interesting cultural connections to the name Pachamama, considering that the restaurant, tucked between a Hy-Vee and a public golf course, looks like a snazzier version of the Woodside Racquet Club.

“It’s so big!” exclaimed Carolyn, fanning herself in the August heat. “Are you sure this whole building is really a restaurant?”

The square-jawed host led us past the open kitchen and into a sweeping, barnlike space (tastefully painted a cool sage green) to a nice little table by a window, looking out on a grassy corner of the golf course. With its unpolished wood and native limestone, the room was comfortable and attractive but not elegant — certainly not fancy: The vinyl-covered tables were uncloaked, simply decorated with a burning candle, an attractive English charger plate with a tropical motif (stylized elephants, zebras, lotus flowers), and a teal, yellow, rose, or green knotted cloth napkin.

I suppose I expected the place, given its location in a college town and its “New World cuisine” sensibility, to be somewhat hipper. But everyone in the dining room — at 7:30 on a Saturday night, at least — was Caucasian and over 40 years old. To the left of us was a trio of chubby men in shorts and polo shirts, to the right a middle-age couple having dinner with Grandma.

“But the menu is very hip,” said John, as he noted the nine “small plates” (appetizers and salads) and eight entree-style “large plates.”

Chef Baker explains that “New World” describes “the cuisine inspired by Central America, the Caribbean, and Mexico, using classic French techniques.” He completely overhauls the menu on the first Tuesday of each month (though he tinkers with the desserts less frequently).

John and Carolyn carefully perused the excellent wine list, which was presented in a bound volume nearly as thick as War and Peace. He was pleased that the selections included a good number of half bottles, and, once armed with full glasses, John and Carolyn were ready to attack the menu. I was starving, so I ordered several appetizers to share, including a bowl of panko fried oysters ($7.50), which arrived hot and crispy on a bed of not-very-soupy “chowder” (more of a relish, actually) of sage-charred fresh sweet corn dotted with bits of celery, green pepper, and little potato cubes. The rarebit ($7.50), a rich Welsh dish of melted cheese and beer, is a glorious bit of Old World cuisine made here with cheddar so sharp it stings and a splash of lemon-scented ale. Floating on this bowl of cream-colored decadence were roasted wild mushrooms and a couple of toasted slices of freshly baked walnut sourdough bread.

The rarebit was so luscious and extraordinary that we started spooning it on the third appetizer, a hot wood-fired flatbread ($6.50) — a haute couture pizza — made with fresh rosemary and slices of baked potato and topped with rich white Vermont cheddar, salty goat cheese, fat roasted shallots, and green leaves of peppery arugula.

After nearly fighting over the last few bites, we decided to pass on a salad course, even though this menu’s featured greens — a simple collection of lettuces with toasted almonds, crispy beets, and teardrop tomatoes ($5) or a warm spinach salad with avocado, spiced black walnuts, and dried bing cherries in a toasted poppyseed vinaigrette ($6.50) — sounded dramatic and unusual. Our appetites and curiosity piqued, we were more than ready to plunge forward to the main event: large plates.

These artfully presented dinner dishes, which range from $16 to $26, offer the standard choices of beef, chicken, and fresh fish (and always a vegetarian creation), but Baker’s culinary approach to his ingredients can be likened to Picasso’s confronting a blank canvas or Bunuel’s wielding a movie camera. Under Baker’s boldly artistic direction, a lowly skirt steak is charcoal-seared and drizzled with a sauce of pumpkin seeds ($22), and a pork tenderloin — the blandest of all meats — is peppered and pan-roasted, dappled with a robustly flavored fruit chutney, and served on a cake of potatoes baked with herbs and scallions ($20).

No halibut ($20) has ever tasted more moist, flaky, or flavorful than Baker’s version, encrusted with a hot, crispy blanket of crushed, slightly sweet macadamia nuts and afloat on a sea of brown butter sauce, flavored with just a hint of tart lemon and savory rosemary. Baker marinates juicy tournedos of beef ($26) in tawny Portuguese Madeira and grills them until they’re nearly fork-tender and mind-bogglingly good. The accompanying mound of chartreuse basil-and-garlic mashed potatoes was barely warm, but it didn’t matter — this spectacular beef didn’t need accessories.

On an equally fashionable note was the vegetarian offering, a “free-form” enchilada ($16), which was neither an enchilada nor quite as free-form as the menu implied. What arrived in a plain white bowl was an enchilada-inspired “torte” of saucer-size corn tortillas layered with an intensely flavored combination of fresh corn, pinto beans, mushrooms, and red chiles, all topped with crumbles of pungent, salty Cotija cheese. It was hot but not fiery, and so incredibly flavorful and addictively good, I wished I had ordered two of them.

Mercifully I hadn’t, because I might have made the mistake of skipping dessert. And at Pachamama’s, those desserts are as inspired as the more flamboyant main courses. Each is priced at $5.50, and there’s always a square tartlet of baked fresh apples layered in the lightest of puff pastry, sided with a generous dollop of vanilla-bean ice cream. This month, the assortment also includes a Tahitian vanilla crème brûlée, a sorbet made with fresh mango, and a wedge of chocolate ganache and dense fudge, splashed with sweet raspberry coulis, aptly called the Chocolate Decadence.

By the time coffee arrived, the tables in the dining room had been seated again with a slightly younger, more diverse crowd. An attractive twenty-something couple was sipping cognac off in the curvy little bar tucked into an unexpected corner of the dining room.

I had eaten one of the best meals I had been served all year. Pachamama’s had charmed even John, my most curmudgeonly friend.

“I wish this was closer to Kansas City,” he pouted. “I’d eat here every day.”