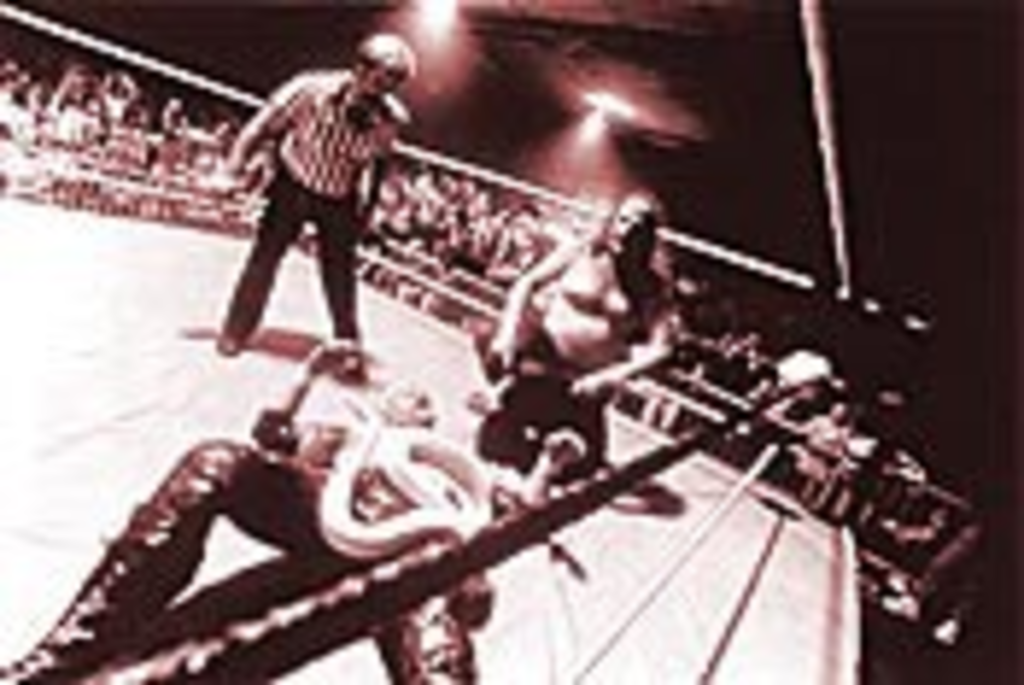 It features epic battles between beefy warriors; throngs of thousands howling for blood; and garish, overblown spectacles to spare. Is it the barbaric battles between gladiators in the Roman Coliseum? Nah, it’s just another day in contemporary pro wrestling. Sociologists, anthropologists, psychologists, and religious leaders can speculate to their hearts’ content on why these modern-day carnie acts have become so popular, but the truth is as obvious as Hulk Hogan’s acting: Pro wrestling is big.

Former Saturday Night Live writer Barry Blaustein, an unabashedly enthusiastic fan, picked up a camera and decided to meet some of his grappling heroes. After more than two years of gaining their trust, the resulting film, Beyond the Mat, is a fascinating and sometimes frustrating behind-the-scenes look at a base cultural phenomenon.

Blaustein’s movie, made with the cooperation of World Wrestling Federation CEO Vince McMahon, spends only a limited amount of time exposing the industry’s backstage secrets. There are times when we see the basement-league training, sleazy promoters, and pre-fight discussions and rehearsals. (Oh, lord — it is fake!) But Blaustein focuses mainly on three personalities. One is a hero from Blaustein’s youth, then-53-year-old Texas wrestler Terry Funk. Another is the amazingly popular leather-masked hulk called “Mankind,” a.k.a. Mick Foley. Most unforgettably, the film highlights Jake “The Snake” Roberts and his pathetic decline into drug addiction and isolation.

Funk, a likable good old boy who knows he’s stayed on too long, has seen his legion of fans dwindle to a few hundred locals. Still, their adoration and his love of the profession keep him coming back after numerous attempts to retire. Adulation is his addiction.

Foley, a giant whose considerable threshold for pain has made him a star, is a study in startling contrasts. A gentle and doting father to his two young children, Foley turns into a human punching bag, willingly absorbing intense physical punishment to entertain the fans and provide a lavish lifestyle for himself and his family. Money keeps him in the ring.

Roberts, a miserable, self-loathing ghost of a human being, performs on the small-town circuit, driving from one tiny venue to another and coming to life only when he’s wrestling. The rest of the time he’s drinking, snorting, and having anonymous sex with trailer trash he’s picked up at the matches. His addictions are all too obvious.

The film’s most disturbing sequence, however, may be the one featuring Foley’s children. Despite their parents’ insistence that “Daddy is only playing,” we see them shriek and tremble in uncontrollable horror as their father is repeatedly pummeled with a folding chair, pounding a deep and bloody gash into his skull. (After seeing this footage, Foley reportedly decided to retire from the ring.)

One problem with Blaustein’s film is his annoying, self-absorbed, and obvious narration. Another is the lack of attempt to examine the fans’ addictions. What is it about this garish and violent spectacle that keeps them coming back? It is a question that is hardly addressed.

Still, the footage of the three main characters provides Beyond the Mat with some unforgettable images. It is the poignant truth of their stories that makes the film a spectacle worth gawking at. (R) Rating: 7